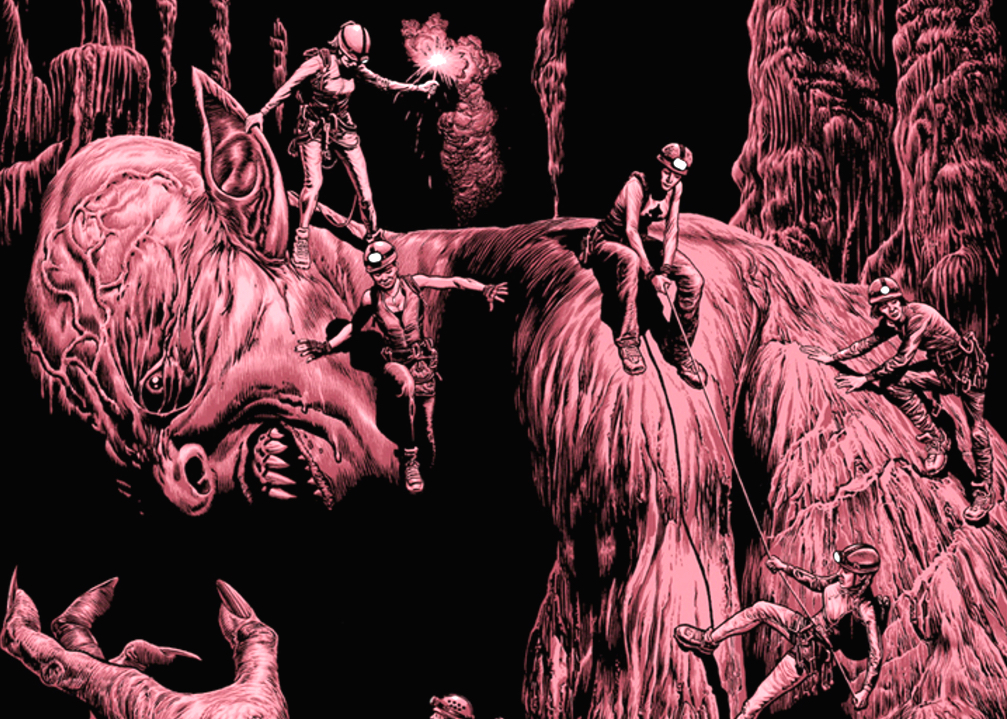 Sunday has once again arrived all too quickly, and here at Halloween Love that means one thing – it’s time for another batch of incredible poster images from the thriving alternative art community!

So far I’ve revealed my personal favorite posters that pay tribute to: Jaws – Stephen King’s IT – Alien – The Shining – The Thing – Ghostbusters – Jurassic Park – Scream – A Nightmare on Elm Street – Halloween 3: Season of the Witch – Halloween – Silence of the Lambs – The Friday The 13th franchise – An American Werewolf in London – The Fly – Gremlins – The Texas Chainsaw Massacre – The Terminator – Wes Craven – Carrie – Trick ‘r Treat and SAW.

This week we travel to a remote cave system deep within the Appalachian Mountains, where six women are about to fight for lives against nature, undiscovered monsters, and each other! This is The Descent.

As always this list showcases MY personal favorite posters. The select few that pushed my art loving buttons and made me want to go spelunking with no map and a LARGE supply of glow sticks! There are a few more brilliant designs out there, but these are the best of the best in my humble opinion. 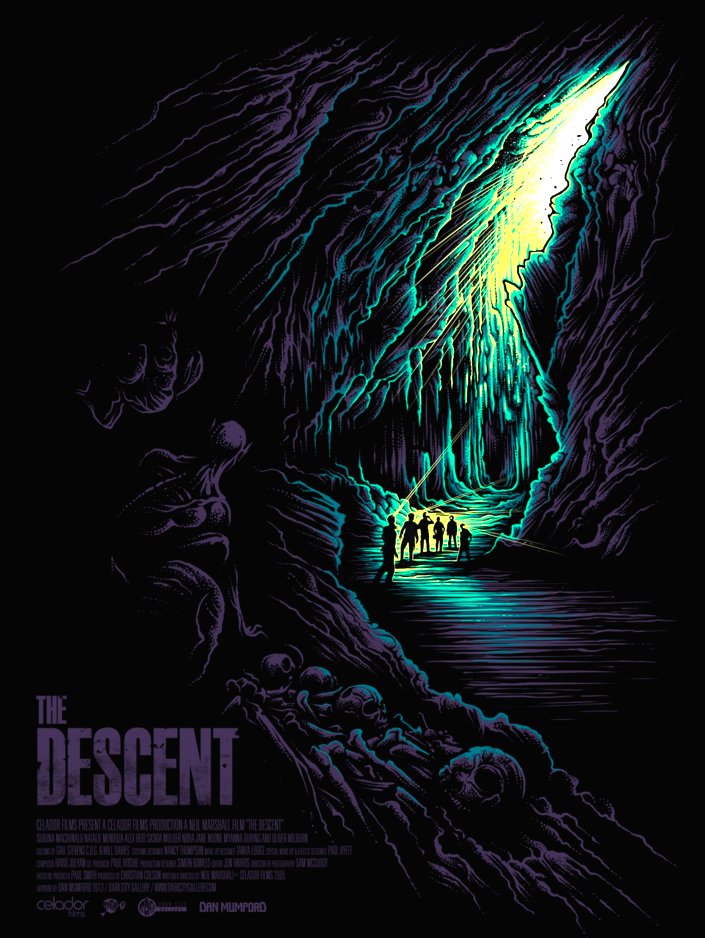 There are multiple reasons why The Descent is SUCH a fantastic movie, but in my opinion it’s the early character development that sets up the rest of the journey so perfectly. For the first 30 to 40 minutes you could almost be forgiven for thinking it isn’t even horror – such is the strength of the script and the quality of the emotional interaction between the six women. The movie allowed us to get to know the characters and start liking them before the shit really hit the fan, and that will nearly always result in a stronger experience.

Dan’s beautifully creepy and subtle poster is a reminder of this slow burn beginning. The characters can be seen in the distance – assessing the situation they have found themselves in and unaware that a Crawler is hiding in the shadows, barely visible against the rocks it is clinging to. No fighting, gore or action – just an atmospheric peek at the surprise danger lurking within that unforgiving cave. 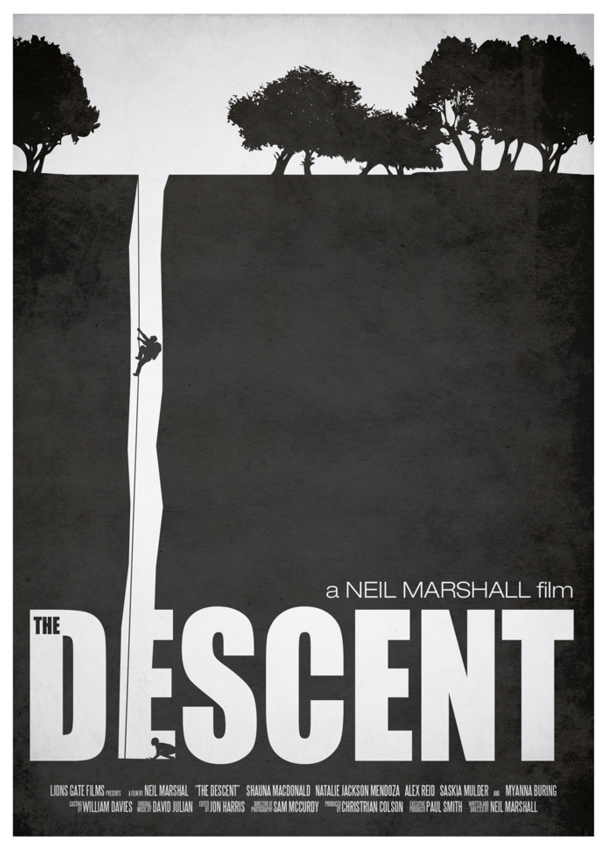 Next up is this striking minimalist poster by Ryan, who created a very clever design that makes me think about the one thing that unnerved me in the movie more than anything else – claustrophobia. Give me a choice between fighting blind monsters with an axe, or being wedged in a tight space deep underground – I’ll take the monsters EVERY time! That scene where Sarah starts to panic in a very small crawl space is the stuff of nightmares to me! 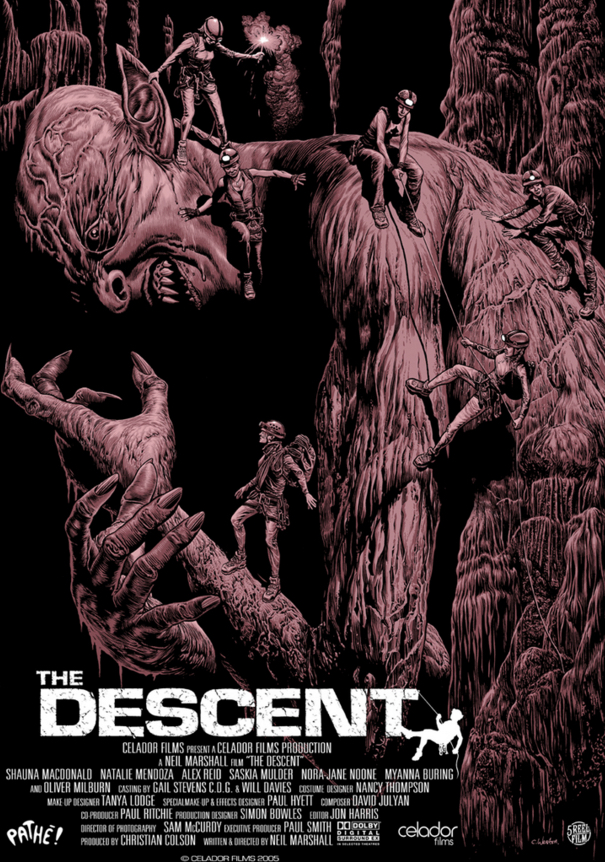 The Descent does a terrific job of taking the characters and just relentlessly throwing danger and death toward them. Problems really do just keep on coming – and we the viewers also feel like we are getting sucked into this hopeless and suffocating situation as the movie progresses. Being trapped underground without any hope of inbound rescue is bad enough! But when you add the presence of the Crawlers, you get a movie that doubles the danger.

The cave can be just as deadly as those creatures lurking in the shadows, and this stunning poster blends both of them together in a detailed and dynamic way. The cave wall becomes a GIANT Crawler, with oblivious characters climbing across it, perfectly mirroring those early scenes when they were unaware just how bad things were about to get! A stunning concept by Chris, and a VERY memorable end result.

Absolutely stunning work by Laz, who has scattered several familiar moments from the movie across this poster and contained them inside a cave structure that forms a skull. It’s a piece of art that perfectly highlights the desperate battle for survival the girls go through, but it also has a sense of inevitable doom within it. Unrewarded bravery – summed up by a trail of blood flowing from an empty eye socket. 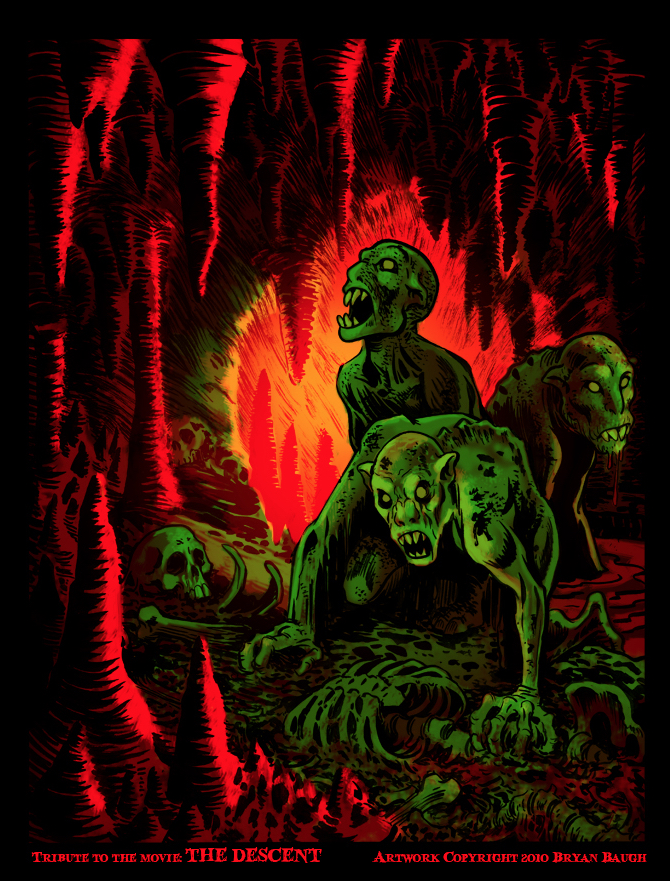 One of the most visually striking things about The Descent is the minimal and natural use of lighting when they were filming all the cave scenes. The ONLY illumination would come from whatever the characters were holding at the time, and it perfectly increased the intensity and feeling of dread that filled each of those moments. Bryan’s eye-catching piece is an awesome little tribute to this wise decision by the production team, and he had this to say on his DeviantArt page…

“I should also mention that “The Descent” has a great visual style. The filmmakers came up with many clever, practical excuses to enhance the mood of various scenes, with savage red light or eerie green glow – via burning torches, helmet-lamps, video cam-corder viewfinders, and hand-held fluorescent tubes. For this illustration, I wanted to draw those terrible subterranean monsters and try to emulate those crazy colored lighting effects” 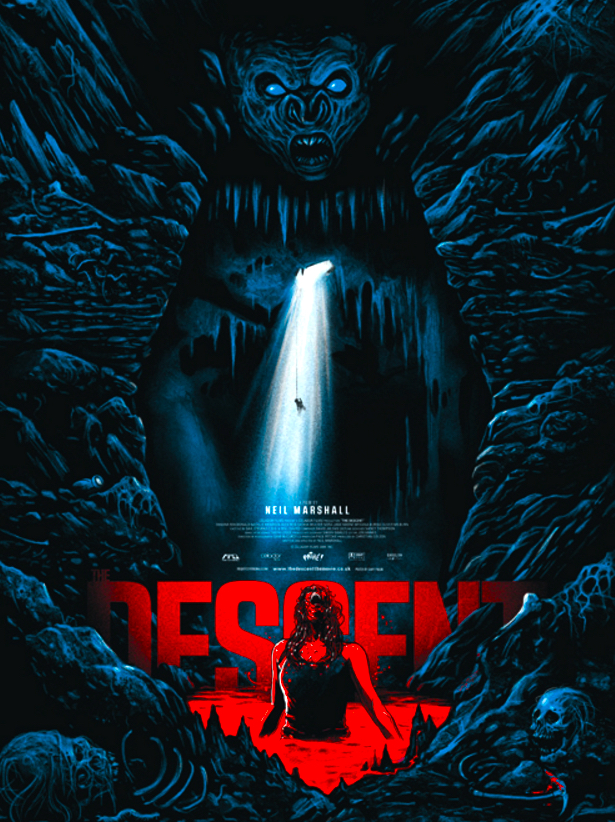 During the process of putting together this list it was quite noticeable that there isn’t a lot of art out there that pays tribute to The Descent. What IS out there is good – VERY good – but for whatever reason it’s a movie that doesn’t naturally attract some of the artists I would normally expect to see. Of course there were exceptions – and this masterpiece by Gary is probably the ultimate example of what can be done when it comes to creating a poster for this modern classic. It’s everything I love in poster art, and the iconic image of Sarah screaming while standing waist deep in the blood pool has never looked better! Dark, desperate and perfect – just like the movie.