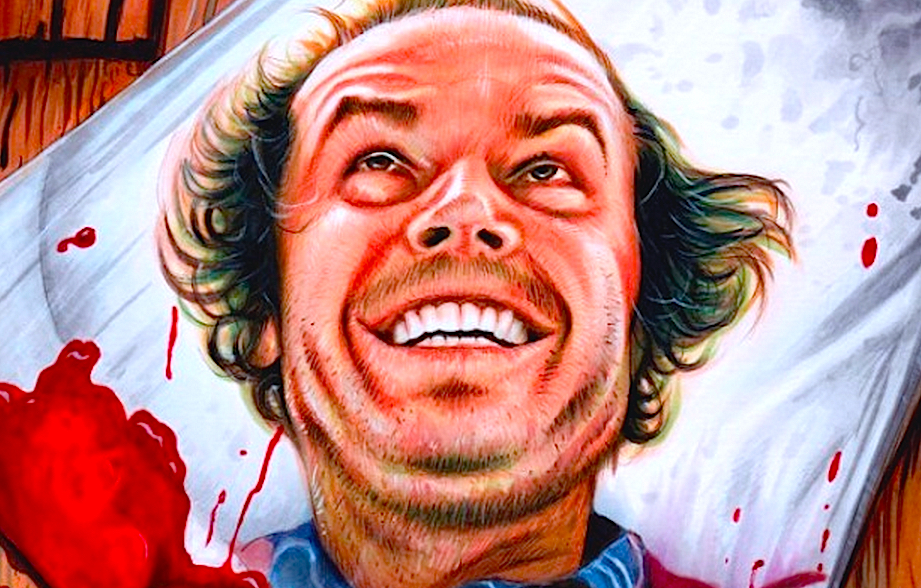 This weekend The Shining will celebrate the 35th anniversary of its original release on the big screen.

35 years of terror, debate, questions, admiration and brilliance. I watched it for the first time when I was probably FAR too young, and the imprint it left has been with me ever since. I hate having favorites when it comes to the world of cinema but I’m comfortable enough to say that The Shining is my “favorite” horror movie of all time. It’s the most worthy choice I can personally think of and it’s entirely possible that will never change for me.

To celebrate this milestone I begin today by bringing together some of my favorite alternative poster artwork inspired by Kubrick’s masterpiece. There is so much incredible art out there but these are the ones I keep coming back to again and again. Grab a warm coat and follow me … 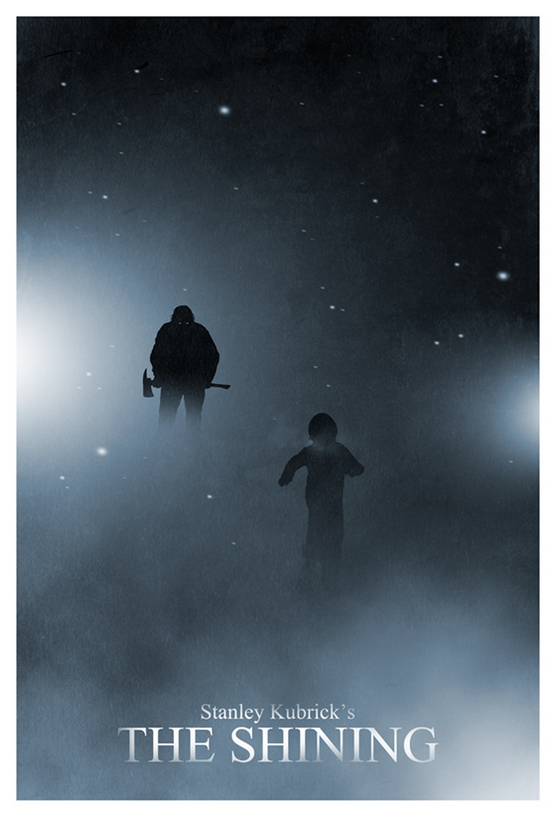 Minimalist perfection. An instantly familiar moment from the film recreated by a talented artist through the use of accurate silhouettes, perfect lighting and some subtle effects work. It’s art that captures the tone and atmosphere of the scene without totally recreating and copying it. Despite the simple nature of the piece there is an attention to detail here that is hard not to love, I especially like the frosty breath that can be seen around Danny’s face and the decision to highlight Jack’s eyes as two small points of light in the darkness. A classy and clean poster that works really well. 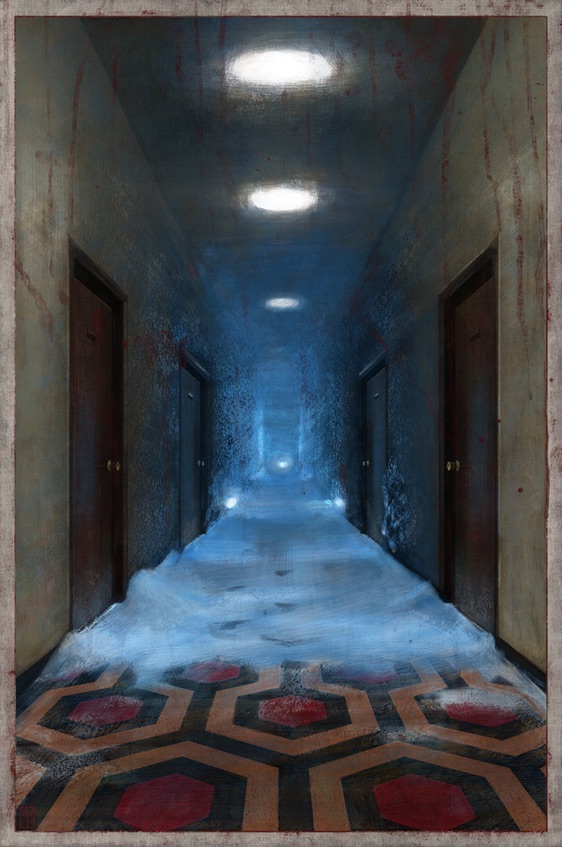 Many artists have featured the carpeted corridors of the Overlook Hotel in their work – while others have focussed on the snow covered corridors found within the maze from the finale of the movie. Matthew brings both of these iconic locations together by blending them into one long stretch of terror. It’s a subtle piece but works perfectly by messing with what your brain expects to see when looking at the image for the first time. A clever concept executed in style.

I could look at and study Justin’s movie paintings all day long! He has this incredible lifelike caricature thing going on, but his ability and eye for light and color make the end results eerily realistic. His Shining piece includes just about everything you would hope to see – in an arrangement that Kubrick himself would have probably admired. This is exceptional art that always puts a smile on my face. Love it! 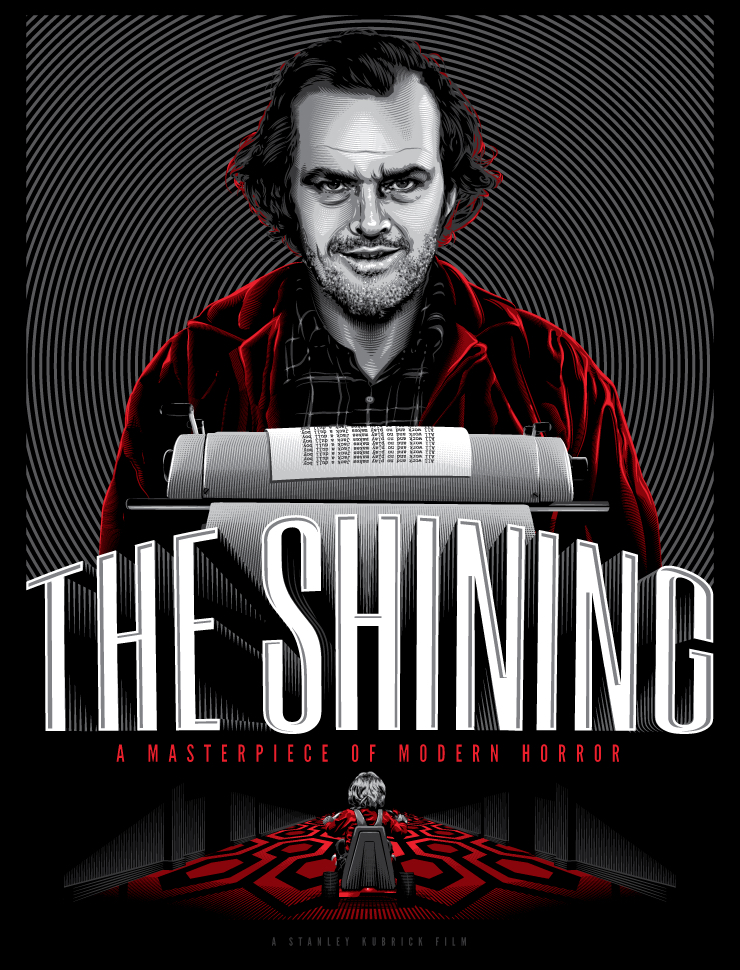 Tracie has created an incredible portfolio of alternative movie poster artwork – including a set of three designs for a Kubrick tribute gallery show. The films she featured were Dr. Strangelove, 2001: A Space Odyssey, and of course The Shining – which is just an incredible piece of art that I knew would be on my list from the moment I started putting it together. Be sure to enlarge it if you have access to a big screen and stare into Jack’s eyes for twenty to thirty seconds. I swear the concentric circles behind him start to move! Hypnotic and brooding, sounds like a perfect Shining poster to me. 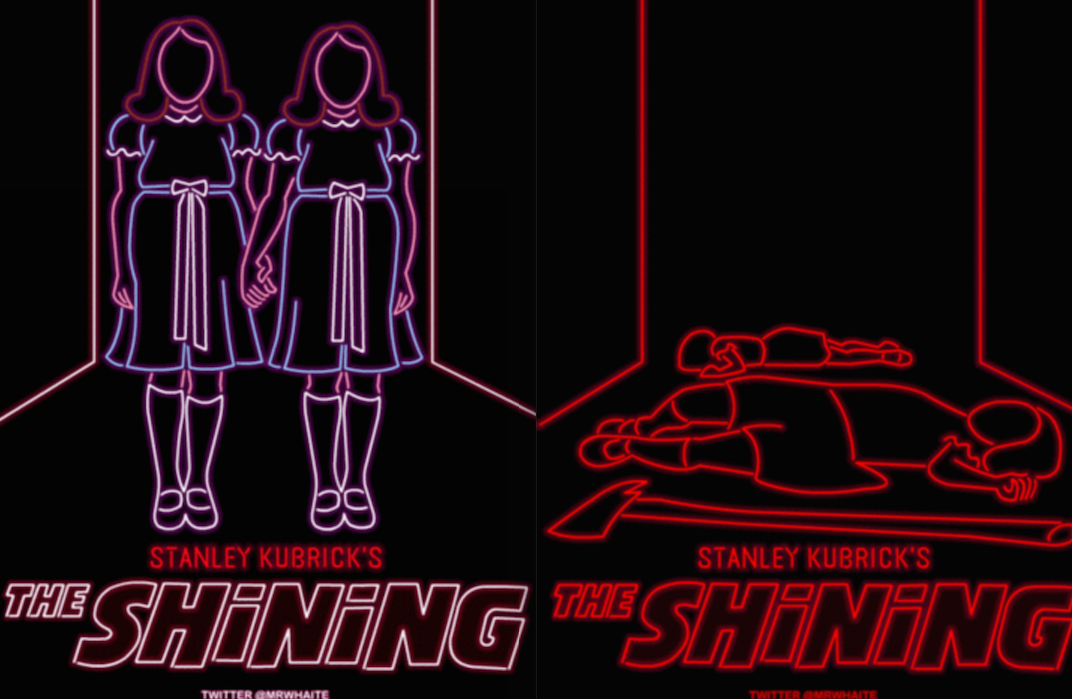 This is actually found online as an animated gif poster, so I was in two minds about including it, but in the end I had to! The concept and idea is so simple yet so clever and just executed to perfection. Like the classic neon signs that are slowly disappearing from our streets (at least they are in my corner of the world), this poster stays fixed on the Grady girls holding hands for several seconds, before quickly flashing to an all red image of them dead on the floor after being introduced to the end of an axe by their father. Think of the moment in the movie when Danny is looking at them and gets a quick flash of their corpses – it’s essentially a neon sign version of that. I SO want a real one to hang outside my house now! 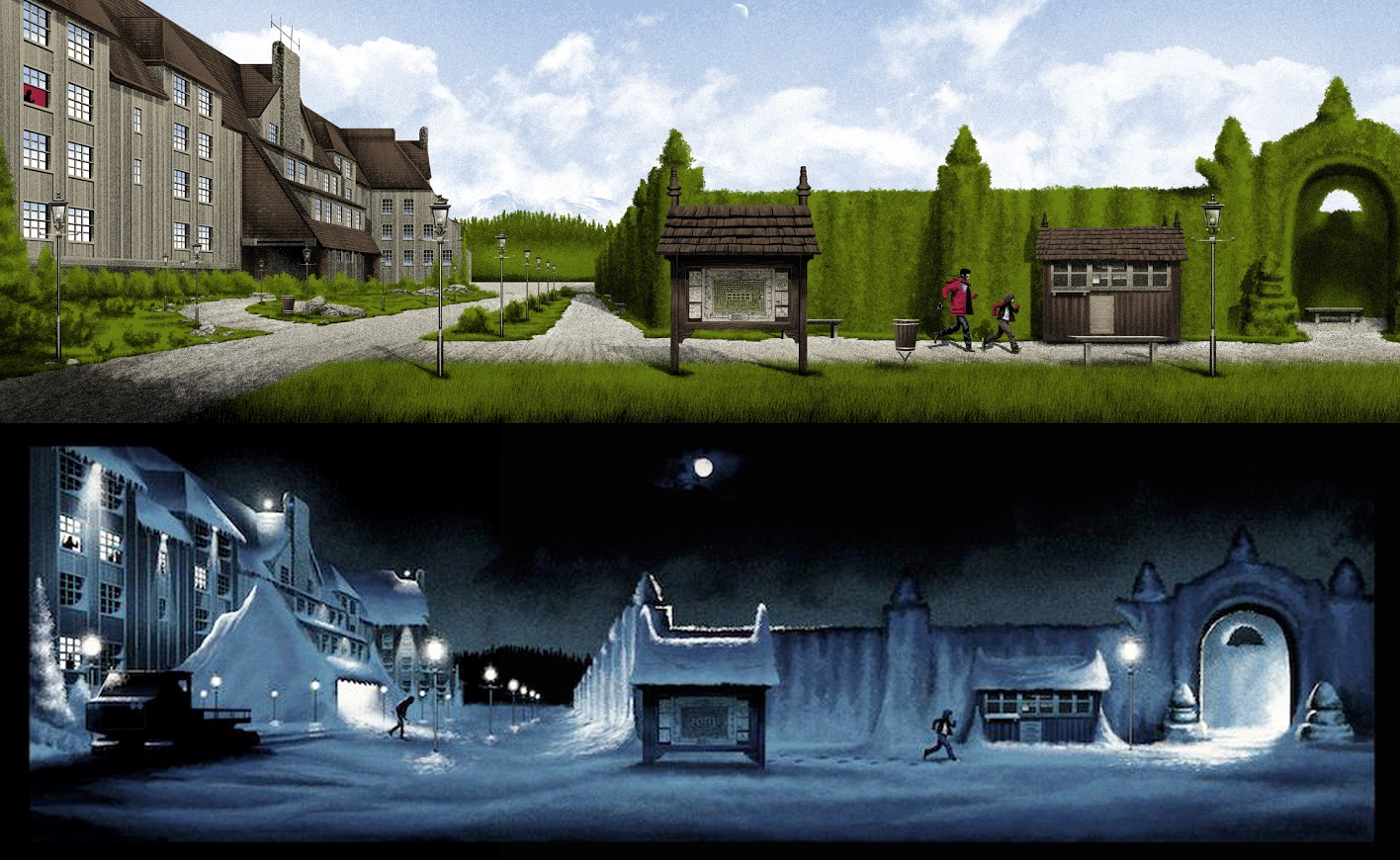 Two pieces of incredible art that pay tribute to the movie by staying outside the walls of the Overlook. The position is fixed and it’s time that changes between these images. In the first we see Wendy and Danny happily running toward the entrance to the maze, while the silhouette of a steadily worsening Jack watches them from the hotel window. Next we return to the same location but winter has arrived – Danny is in exactly the same position but isn’t running for fun anymore, and a helpless Wendy is now the one watching from a window as Jack relentlessly limps forward clutching his trusty axe. The level of detail Mark has put into these illustrations is breathtaking, and the long stretched format enables him to include all the players involved in these memorable movie moments. 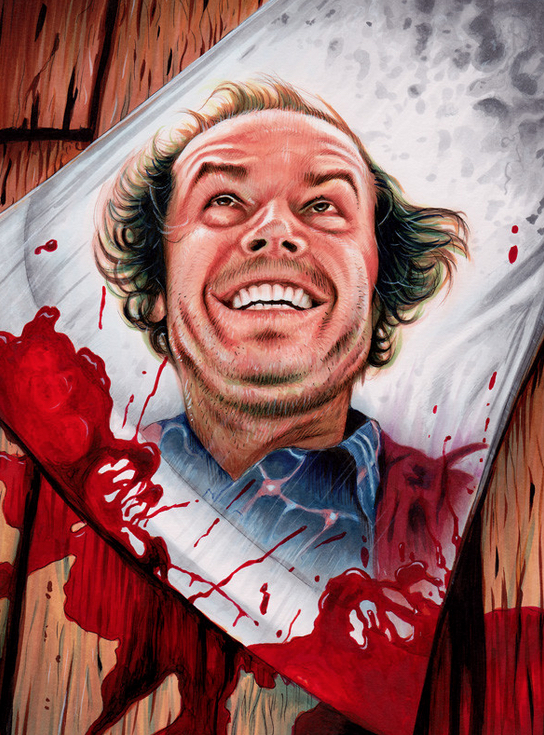 I’ve always loved the low camera angle Kubrick used on Jack as he taunts Wendy through the door of the locked pantry. The camera operator basically lay on the floor between Nicholson’s legs, and it resulted in a wonderfully unusual view of his face, at a point when the character was completely under the control of the Overlook’s dark forces. Trev has taken this classic shot and very effectively reimagined it as a reflection on the blood stained axe head. Classic components from the movie being combined to create an awesome and intense piece of art. 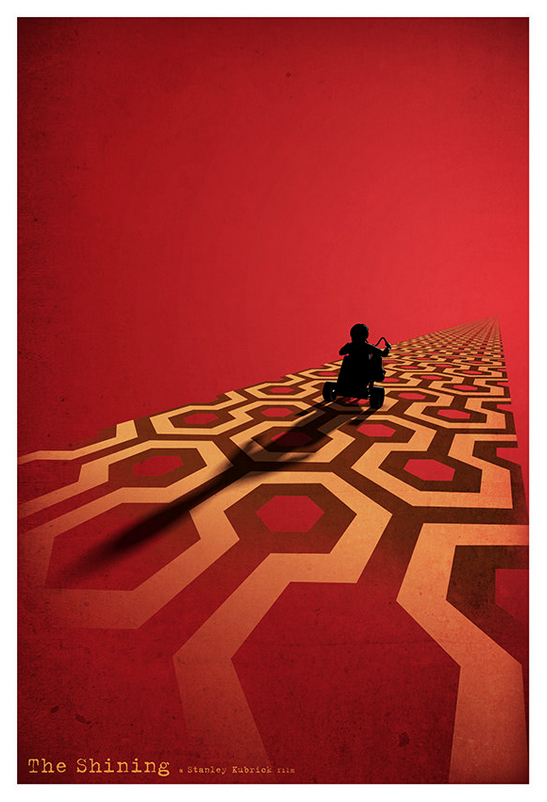 I’m going to finish for today by returning to where we started with another sharp and satisfying poster by DirtyGreatPixels. It really is a testament to what Kubrick created that nothing more than the design on a carpet and the silhouette of a small boy on a trike can be SO instantly familiar, so unnerving and so powerful. I don’t think there has ever been a movie that has been studied and discussed as much as The Shining. Personally, I suspect Kubrick was just making a bloody good film, but it’s cool to ponder the possible secrets contained within this terrifying epic.