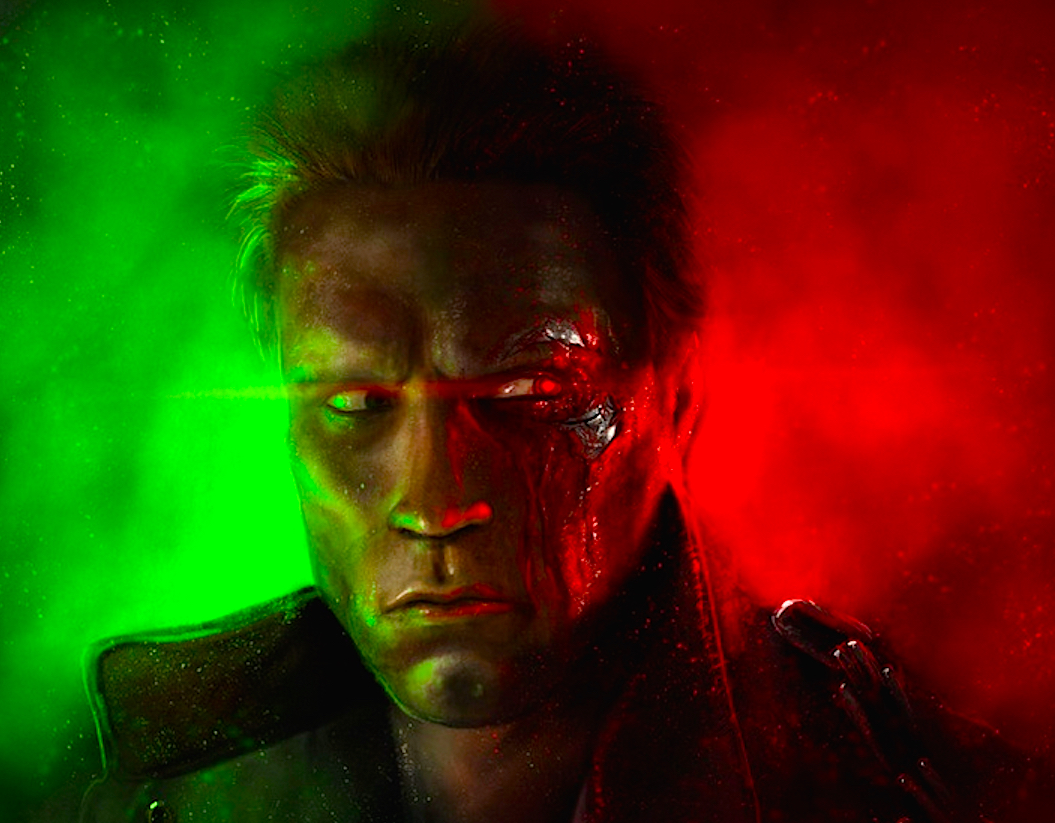 So far I’ve revealed my personal favorite posters that pay tribute to: Jaws – Stephen King’s IT – Alien – The Shining – The Thing – Ghostbusters – Jurassic Park – Scream – A Nightmare on Elm Street – Halloween 3: Season of the Witch – Halloween – Silence of the Lambs – The Friday The 13th franchise – An American Werewolf in London – The Fly – Gremlins and The Texas Chainsaw Massacre.

This week we journey back in time to the year 1984 and head toward Los Angeles, where a young waitress is about to face a very BIG problem …

The Terminator has arrived!

As always this list showcases MY personal favorite posters. The select few that pushed my art loving buttons and made me want to wander the streets naked while asking random women if they are called Sarah! There are hundreds more incredible designs out there but these are the best of the best in my humble opinion.

Now, read this list if you want to live! 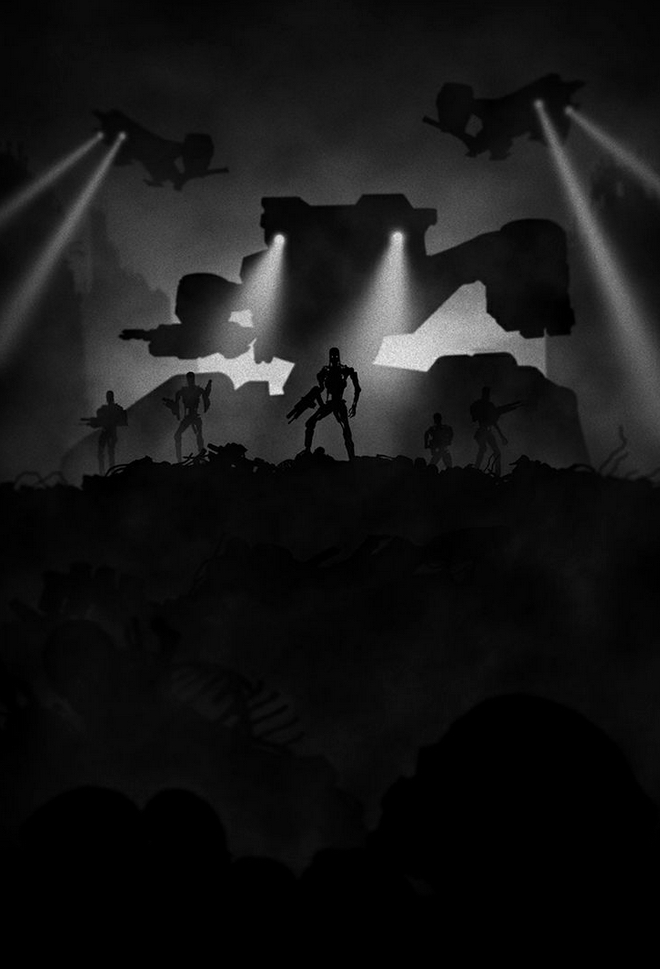 Marko takes us into the future with this ridiculously awesome and atmospheric piece that was part of his “Noir Vol 2” series of posters and prints. Every Terminator film made an attempt to show us the future, the world after Judgment Day, but in my opinion it’s still the original movie that brought it to the screen most successfully. Cameron didn’t need the unending possibilities that CGI can provide, he did it all with clever lighting, great sets and some incredible miniature model effects. It looked beautifully bleak in 1984 and still looks perfect today. Marko’s art flawlessly recreates the permanent darkness we saw in those haunting memory fragments and it’s a poster I truly admire and love. 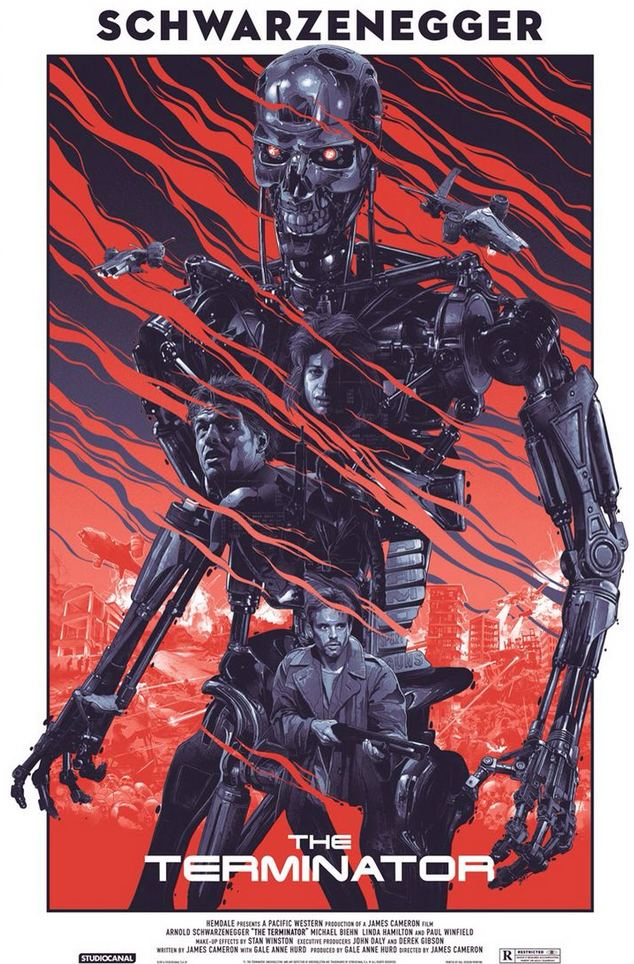 Another big, bold and epic masterpiece from Gabz, as he once again uses the silhouette of a character as a space to fill with wonderful and highly detailed imagery from the movie. Most Terminator art understandably focusses on the cybernetic assassin and not much more, so it’s very cool to see the likes of Kyle Reese and Sarah Connor within this design, along with plenty of Skynet’s finest killing machines. 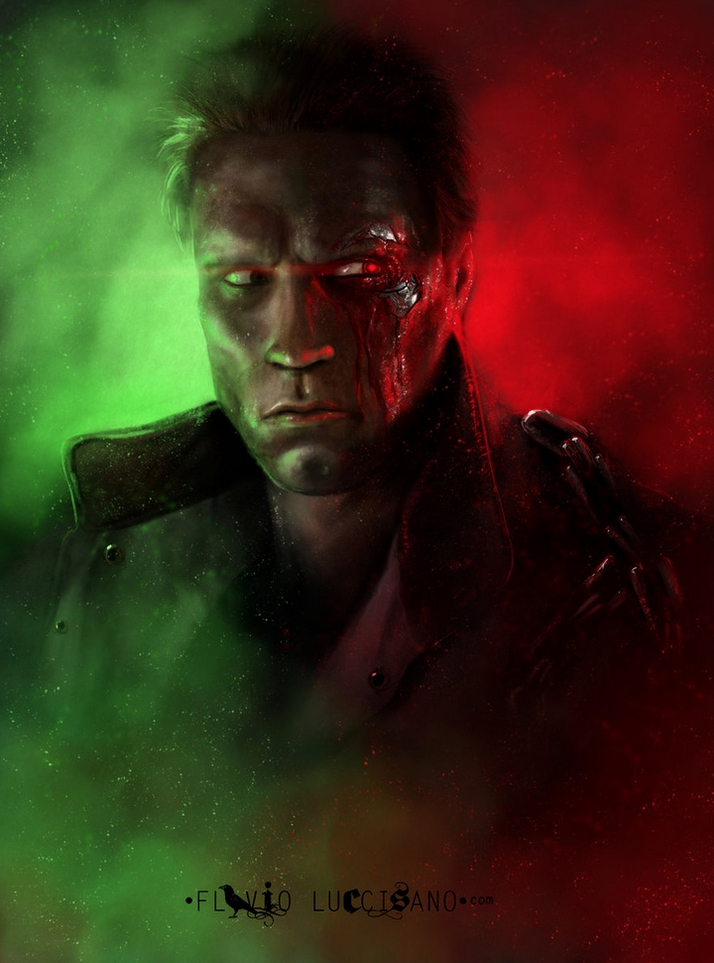 The lighting within this artwork by Flavio is just incredible, it perfectly captures the way Arnold appeared when he is slowly cruising around in that stolen police car looking for Kyle and Sarah, shortly after the battle inside ‘Tech Noir’. By that point the Terminator had sustained some minor damage to his skin, and I always liked the way Cameron filmed Schwarzenegger from that point onward. The character started to look more monstrous, intense and darker.

Craig’s stylish artwork always reminds me just how perfectly simple and effective the official poster for the movie was. Just Arnold looking like the ultimate badass, and some red lines in the background that looked like neon strip lights. Everything about it screams 1980’s sci-fi action, and I get the same wonderful retro vibe from this brilliant piece by Craig. It also scores points for being named after the nightclub that Sarah Connor seeks refuge in while she waits for the police to take her into protective custody. The Terminator arrives on the scene moments later, and what follows is one of the most exciting and nerve-shredding set pieces in action movie history.

The Terminator “Nice Night For A Walk” – (Matt Ferguson) 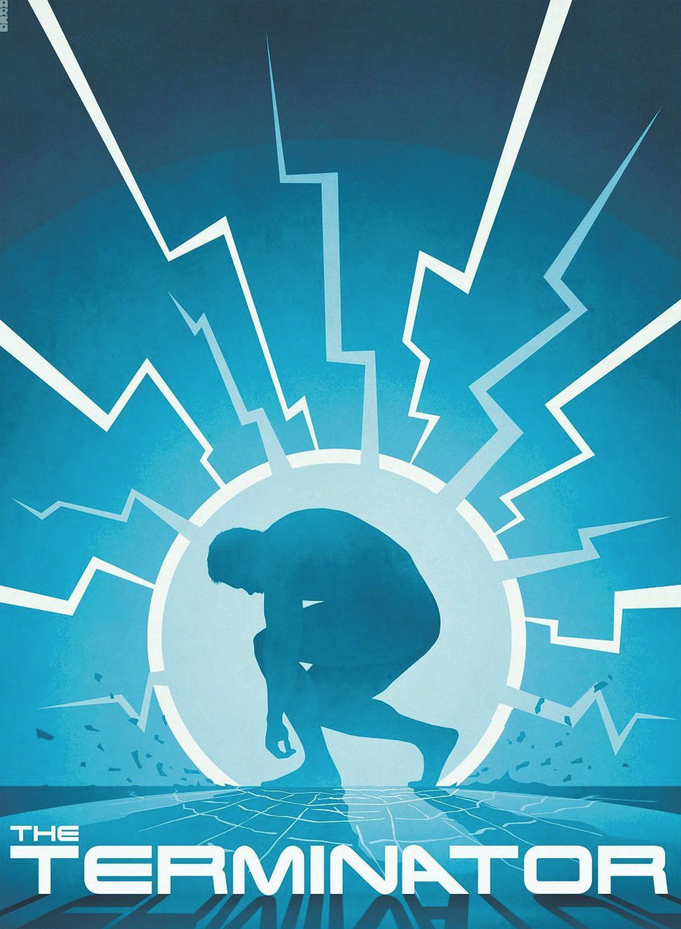 Matt’s Terminator tribute has been a favorite of mine for quite sometime. It’s a simple concept but the execution is razor sharp and the finished piece has genuine impact and power. Many iconic moments were created during the filming of this legendary movie, but the T-800’s arrival in that crouching position and the way he then slowly rises is a movie introduction for the Hall Of Fame. 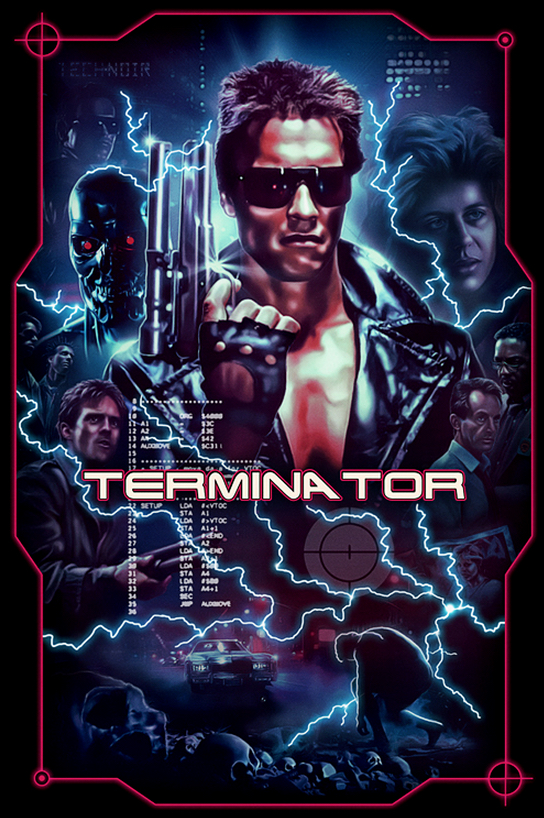 Ralf’s smooth and more traditional poster is just dripping with characters, details and a color scheme that really takes me back to the artwork you would find on VHS boxes and posters during the 80s. Take a moment to REALLY study this electrified masterpiece, the design is outstanding and the content is guaranteed to make all fans of the movie grin like idiots. Bill Paxton is even in there! 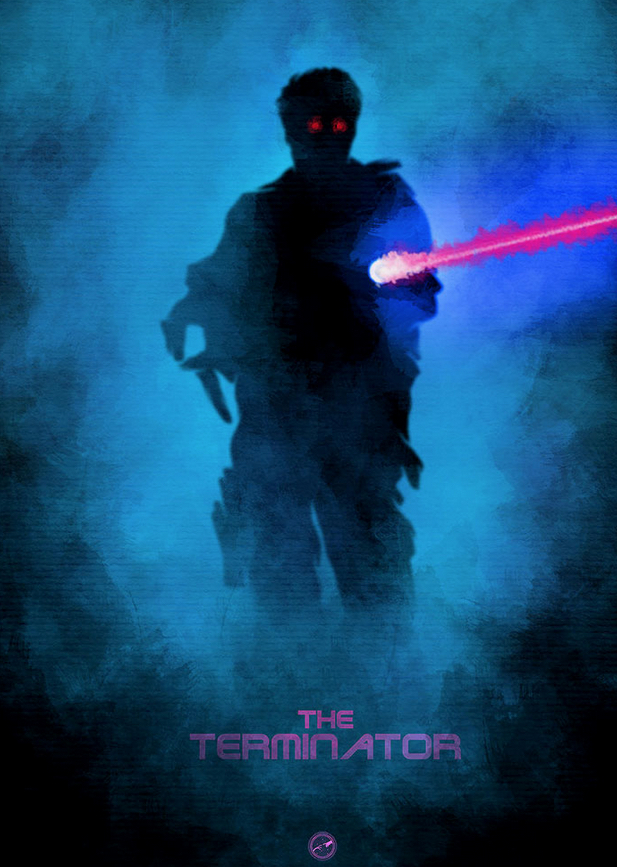 Some of the most unforgettable and intense moments from the original movie are contained within the memories Kyle has of the future. Some may be accurate recollections of events that really happened, while others could simply be nightmares, but what becomes clear is just how desperate and hunted the human race has become since Judgment Day. Mainger’s art focusses on the memory I personally remember the most, when a Terminator manages to infiltrate a resistance bunker and starts massacring everyone inside with a huge plasma cannon. Filmed in slow motion with those glowing red eyes piercing the darkness, it’s a genuinely creepy and unnerving vision of things to come that Mainger has brilliantly recreated. We finish for today with this very unique and clever poster concept from Adam. Here is what he had to say about it on his DeviantArt page … “Seeing as how the Terminator finds out where Sarah Connor lives by looking through the phone book, I thought this would make a pretty cool alternative poster for the movie. The advertisement for the Tech Noir nightclub where he goes to kill her features the correct address and phone number from the film!” How cool is that? Love it!