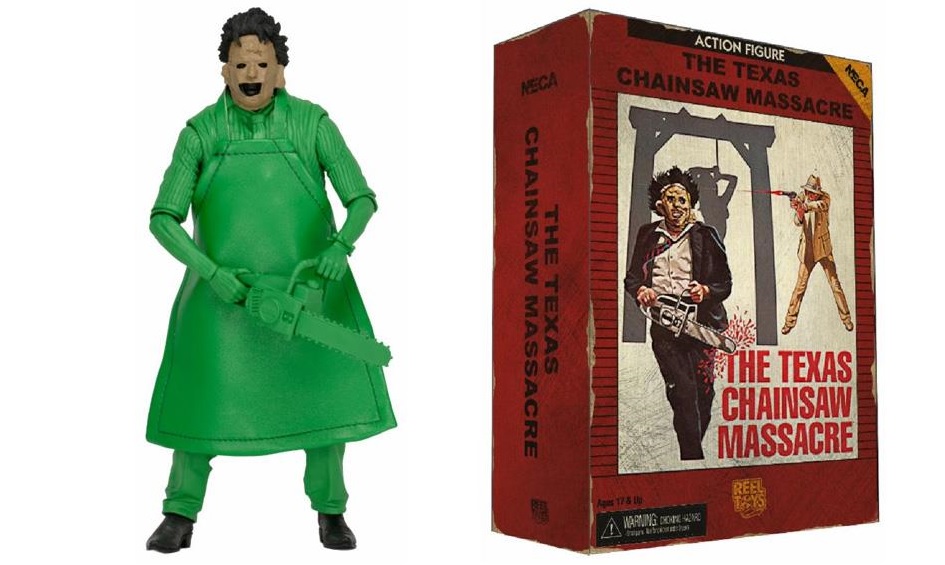 This weekend is of course the San Diego Comic-Con, and one of NECA’s big toy reveals at the event was this highly unique upcoming action figure of Leatherface. The toy is based on Wizard Video’s 1982 Texas Chainsaw Massacre video game for the Atari 2600, and it’s the latest in a long line of video game-inspired horror toys that the company has recently put out. These green-bodied Leatherface toys are set for release in October. 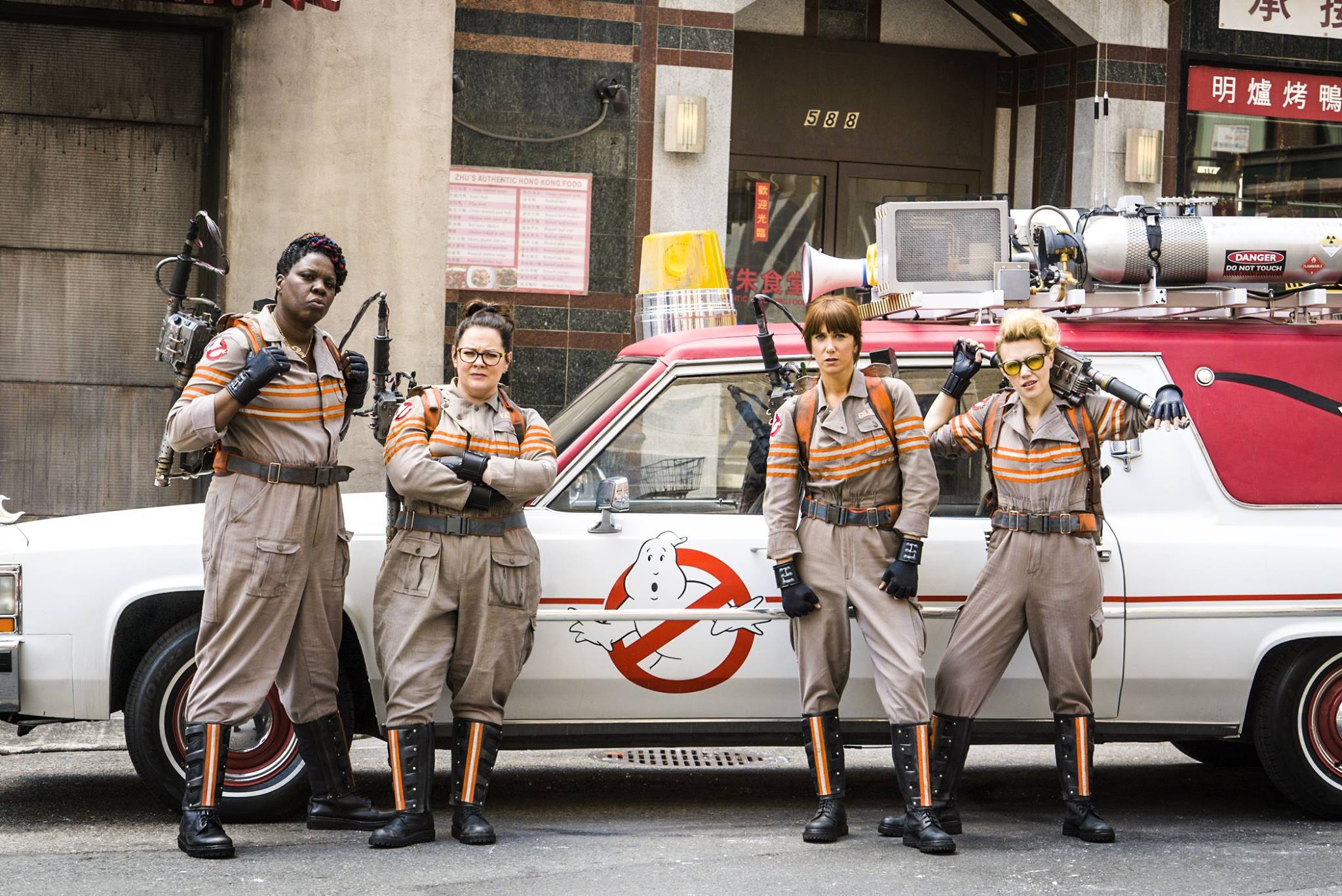 Perhaps this week’s biggest internet happening was the long-awaited reveal of the new female Ghostbusters, which director Paul Feig tweeted out. Unsurprisingly, many had fairly silly reactions to the photo, but I personally can’t think of anything bad to say about what we’ve seen so far. The thing that excites me most about the Ghostbusters reboot is that it’s sure to make a star out of Kate McKinnon (far right), who is my favorite current SNL cast member. Can’t wait to see her in action as the group’s resident Egon. 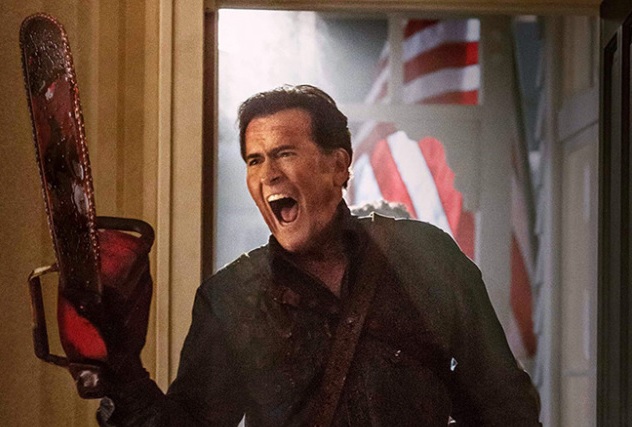 The biggest gift to horror fans at this year’s Comic-Con was the trailer reveal for upcoming Starz series Ash vs. Evil Dead, which is honestly so goddamn perfect and cool that I can’t even believe the show is a real thing that’s actually happening. I never in a million years thought we’d get to see Bruce Campbell play Ash one more time, so the image above is one that makes me more excited about something horror related than I’ve been in a long time. The series premieres on Halloween night. 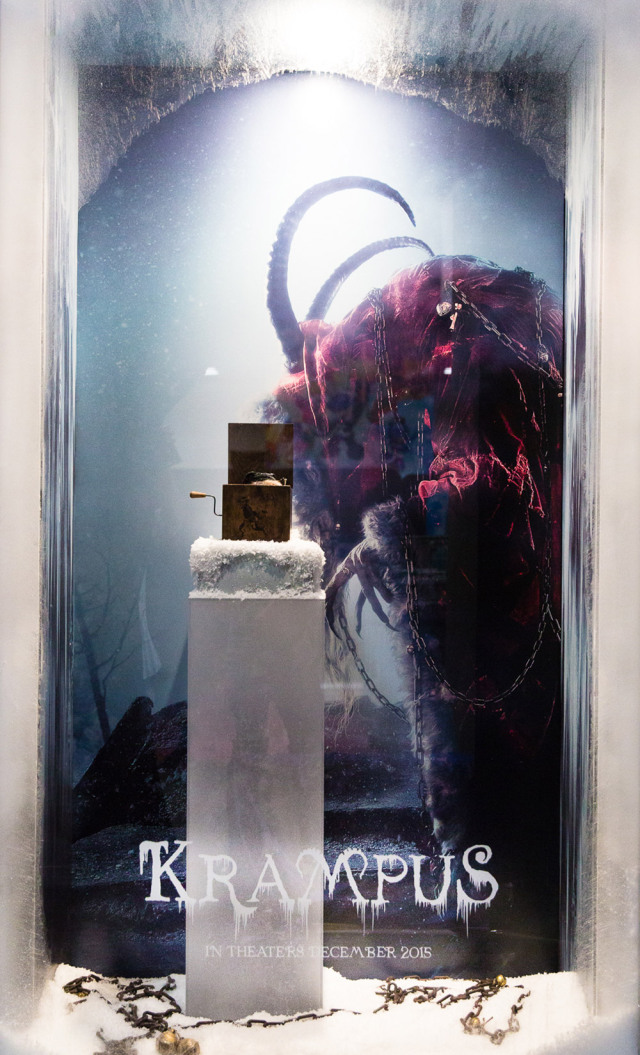 One film I absolutely cannot wait for this year is Trick ‘r Treat director Michael Dougherty’s Krampus, a Christmas-themed affair that will center on the mythical holiday demon of Alpine folkore. It unfortunately doesn’t appear that we’re getting a trailer at Comic-Con, though Dread Central managed to snap this photo of a particularly cool promotional display at the event. This is our first real look at Krampus, out in December. 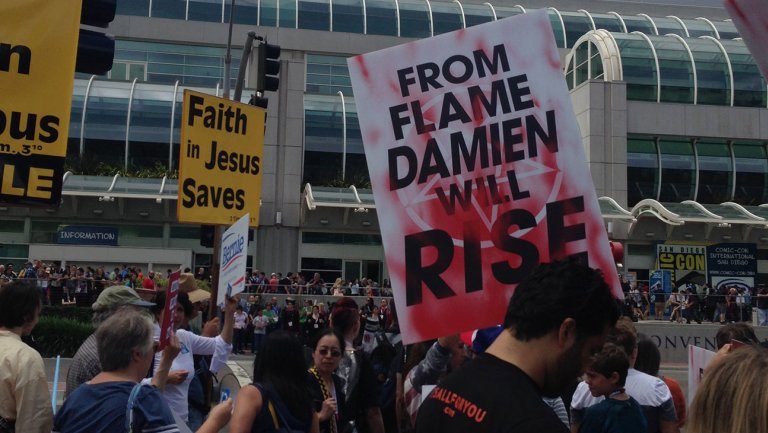 Easily the most clever promotional campaign at Comic-Con this year was for A&E’s Damien, a new TV series that will serve as a direct sequel to the original 1976 version of The Omen. The network sent out volunteers to hold up signs promoting the show on the streets of San Diego, and they were intentionally stationed right alongside a group of Christian activists. Offensive or brilliant? I’m leaning more on the side of absolutely brilliant. 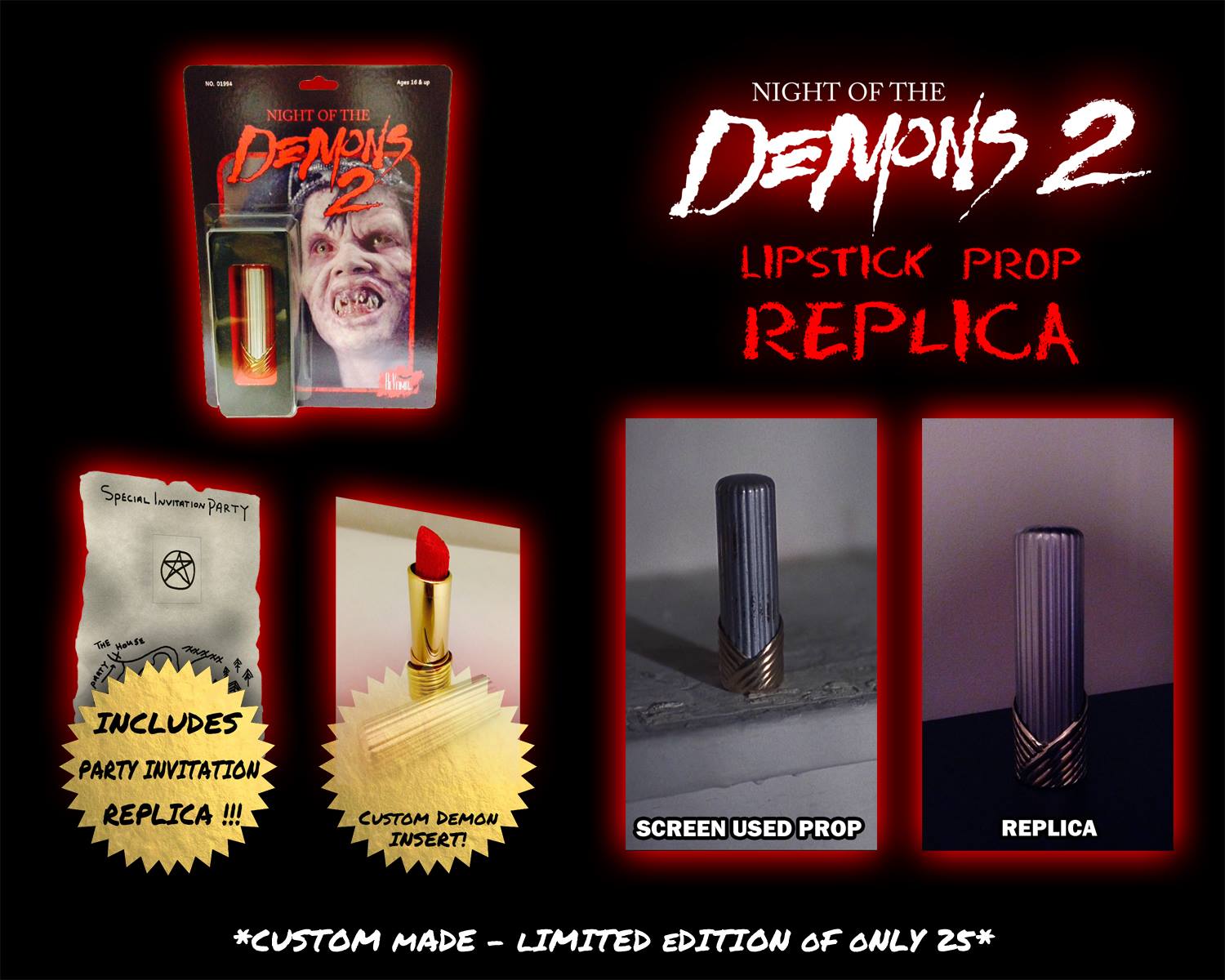 I recently showed you a Night of the Living Dead (1990) replica gas pump key that I purchased from Revamp Toyz, and now customizer Terry Gearlds is back with a brand new collectible offering. This time around he’s turning his attention to Night of the Demons 2, whipping up a screen accurate replica of the sequel’s infamous lipstick tube. Housed on a thick cardback, the lipstick also comes with a replica party invitation, and these unique ‘toys’ are selling for $40. Act fast, because only 25 were made. 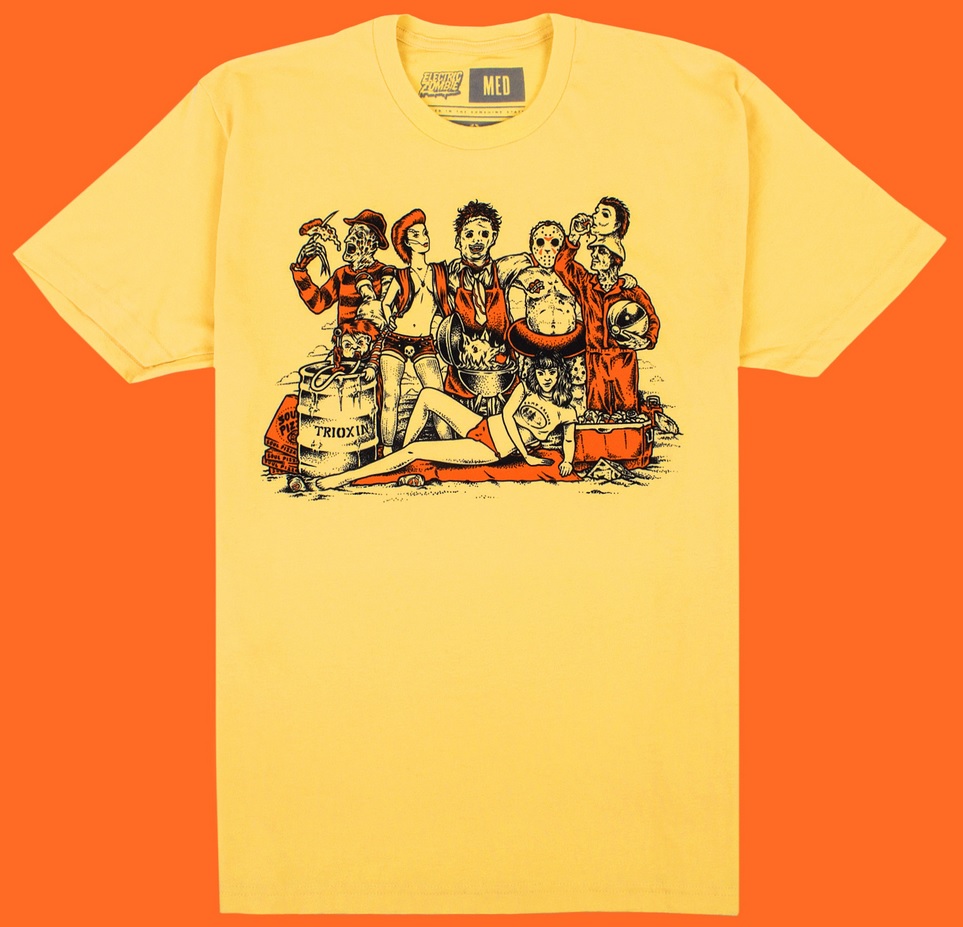 Horror/pop culture clothing company Electric Zombie just unveiled their summer 2015 line, which includes shirts inspired by everything from Gremlins to Return of the Living Dead, RoboCop to Teen Wolf. One of the coolest shirts in the new line is this one titled ‘Buzzkills,’ featuring a handful of horror icons hanging out at a particularly awesome summer party – including Chucky, Trash, Michael Myers and even Angela Baker. The shirts are selling fast, so don’t hesitate if you dig the design. 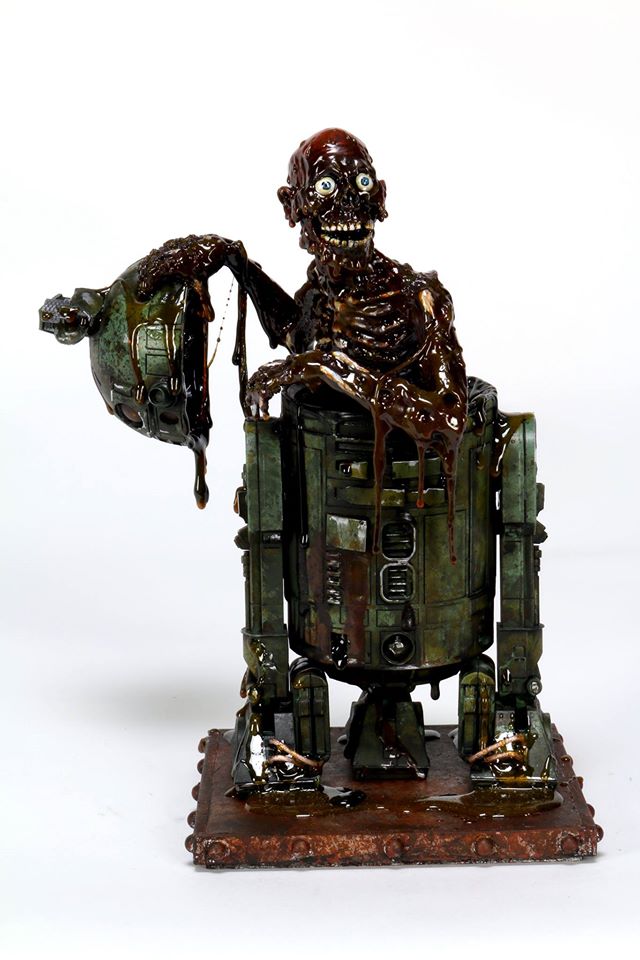 And finally, one of the coolest things on display at Comic-Con this weekend is Sideshow Collectibles’ R2-ME2 challenge, wherein the company tasked artists from around the globe with re-imagining an unpainted R2-D2 figure in their own vision. Artist Brian Dooley knocked his contribution right out of the park, turning R2-D2 into a Trioxin barrel, with Return of the Living Dead‘s Tarman emerging from it. Head over to Sideshow’s R2-ME2 gallery to see all of the awesome submissions.