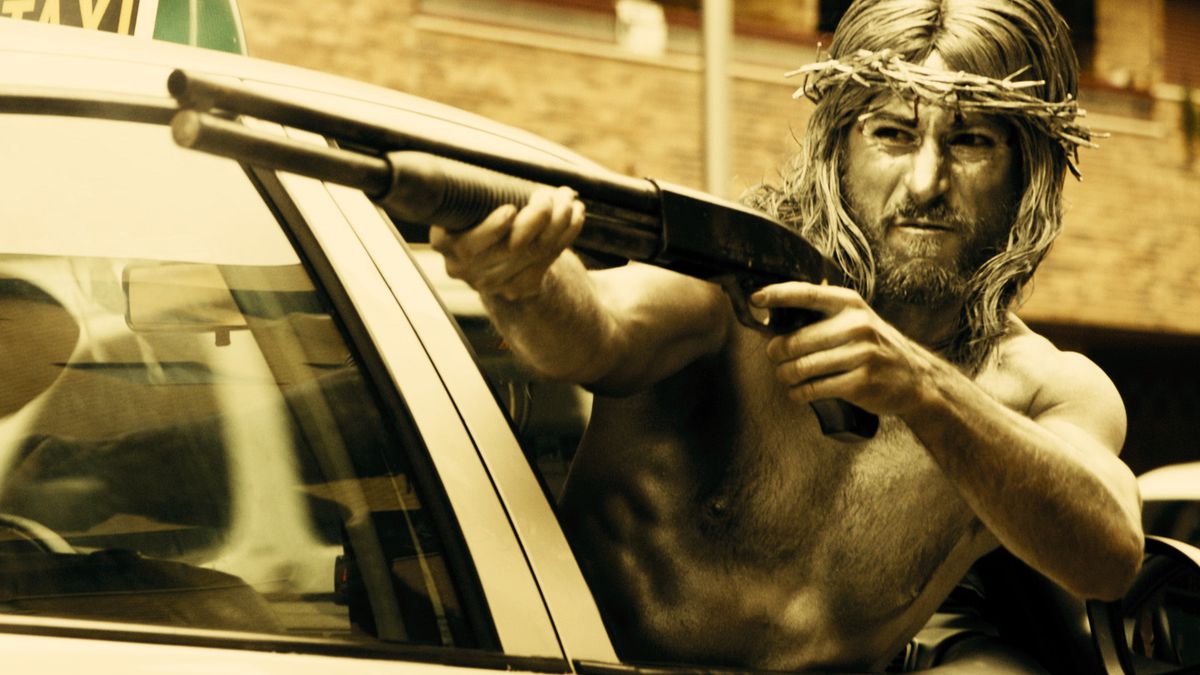 If you are like me, you spend a good chunk of October looking for new and unique movies that will get you into the holiday spirit. A few years back I came across an intriguing, fairly new film from Spain called Witching & Bitching. The title alone drew me in, though I thought it could swing either way and be a raucous good time or an embarrassing endeavor for all involved. Thankfully by the time the credits rolled I was in love with this movie and have since made it part of my yearly Halloween season viewing.

The film was directed by Alex de la Iglesia and riffs off of familiar movies like From Dusk Til Dawn telling the story of a group of thieves who have just pulled off a high-profile heist. Dressed as entertainers like Spongebob and the Statue of Liberty they find themselves on the run from the police after the robbery doesn’t go as planned. To make things worse the man leading this job has brought his young son along for the ride since it’s his weekend with the kid and, oh yeah, they run into a nasty coven of witches who want to eat them and use the child for their evil bidding.

The film moves at an incredible pace, moving from set piece to set piece and never seeming to slow down for anything. The movie opens right onto the heist and the chase that ensues immediately after so there is no waiting around for this story to get moving. From there the chase leads them to the town where this coven of witches lives and it only takes a few moments of screentime before they run straight into their worst nightmare. Juggling the main story and the side-plot of the main characters ex-wife the film is able to always show us something we want to see and in turn is without any real dull moments.

The story doesn’t take place on or around the holiday and there isn’t a jack-o-lantern in sight, so why do I think this is a perfect Halloween time movie? because the tone, the subject matter, and the all around atmosphere of the movie embodies everything we want to see come this time of year. There are decent scares, great characters, good laughs, and a genuinely spooky plot to focus in on.

When you consume horror year round like I (and I’m sure most of you guys) do the usual “scariest movies of all-time” isn’t what we want to watch to get into the spirit of Halloween. Rather, we are looking for a specific kind of cinema that evokes a certain set of emotions and memories that make up our love for the season. It’s not just about being scared, it’s about being reminded, in a way, of what is so magical about October 31st.

For me, this movie brings all of that together in an incredible way and every time I pop it on I am transported back to that October night when I first saw it. Though the story doesn’t take its “horror” turn until the back half of the film there is no time wasted getting into the thick of the action. In the beginning of the movie, we see all the would-be robbers dressed in costumes to disguise themselves. Used as a clever cover up for their identities this little plot device also manages to evoke Halloween imagery right away as they are all basically dressed in Halloween costumes.

I know, that’s kind of a stretch but it really hit me that way the first time watching it and when it quickly moves into the true plot of the movie that feeling is only intensified. Not to mention this entire opening heist sequence is packed full of great laughs and gorgeous action set pieces and once they run into the coven of witches I think the rest more or less speaks for itself. There are so few good movies dealing with this subject matter, which is insane considering you will see 200 kids dressed as them come Halloween night, so I feel that the ones that exist need to be cherished.

The movie focuses on three main witches who represent three generations of this wicked family, but there are a number of others who show up later in the film as well. They all have wildly different personalities and each will bring back memories of witches from your favorite movies. For example, it is easy to draw comparisons between the main three in this film and the Sanderson sisters from Disney’s Hocus Pocus. They also keep a wonderfully entertaining crazy old man named El Inadaptado Social (which translates to Social Misfit) around to do their busy work and he is exactly the type of creepy character we love to see in these movies.

He is just one of a number of great characters who populate this story. The main group of people, consisting of the robbers themselves and their now friendly taxi driver, are all distinctly different people who only share the need for money and power, and the way they clash together is a testament to the writing. Then there are the actual witches who also have a wide range of personalities among them. The youngest of them all is a gorgeous seductress who plays with the minds of men, her mother is a more professional, stylistic witch, and the grandmother represent pure old school carnage which is proven by her nasty set of metal teeth.

These people create the tone and atmosphere of the entire movie and in turn, create exactly what I adore so much about it. Not only does this movie have great witches, a solid plot, and great characters but it is also truly funny. The interactions between the characters and the situations they manage to get themselves through are sure to bring big laughs constantly throughout and that’s not something I fully expected when first going in.

Witching & Bitching may not do anything new and revolutionary for the genre or for witches in cinema but it uses what has been laid down before them to craft an intelligent and highly entertaining horror film. The near two-hour runtime will seem like a quick breeze as the movie moves at an incredible pace and only slows down for quick spurts to catch you up on the plot. It’s refreshing to watch a movie totally nail their witchcraft without trying to be some kind of arthouse interpretation of it. These are good old fashioned witches taking part in some good old fashion satanism.

Witching & Bitching is currently streaming on Hulu and is available to rent on iTunes in HD for $4.99