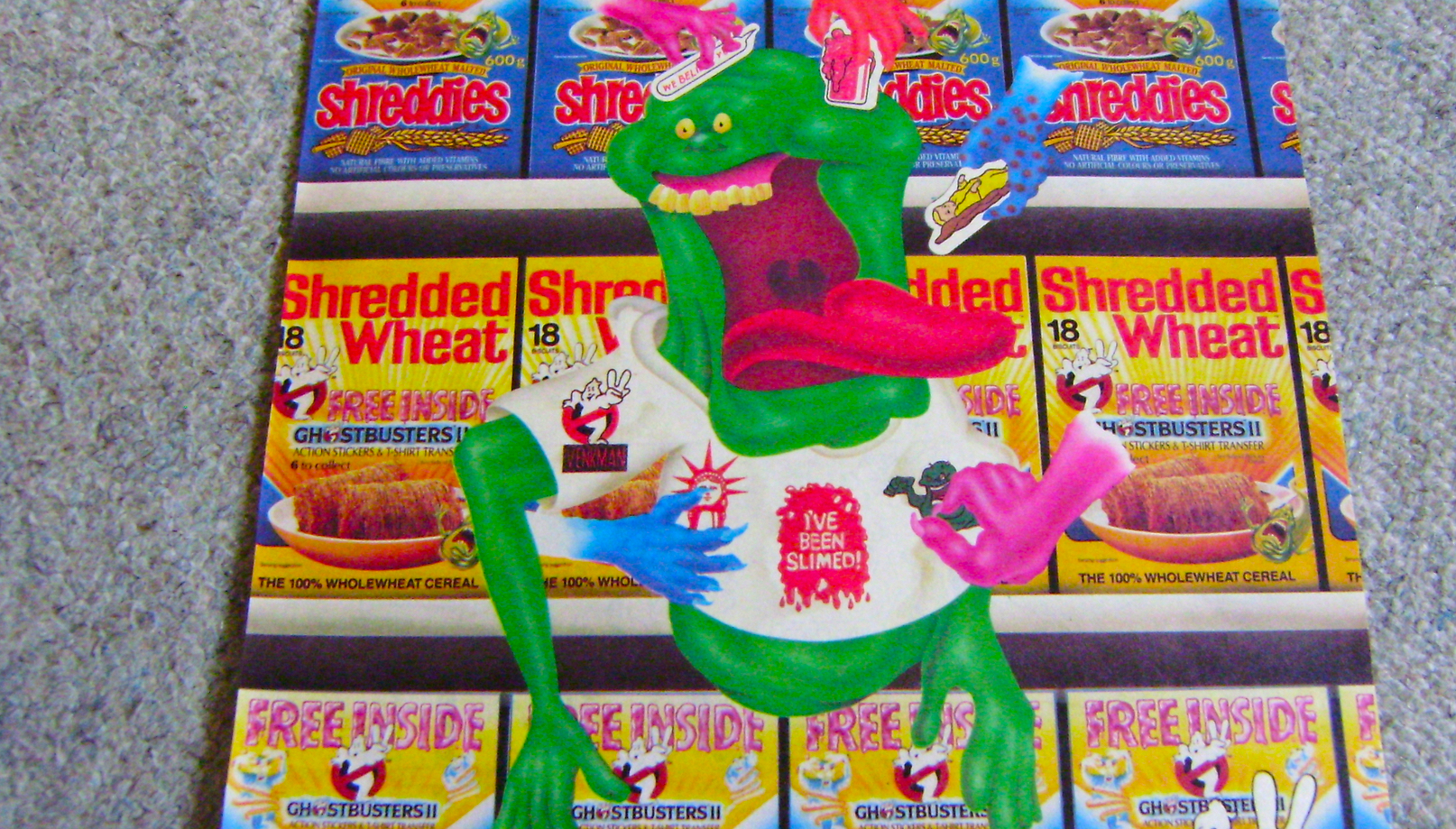 I loved the Ghostbusters! … The movies, the cartoon, the toys, the merchandise, all of it. Looking back it felt like you couldn’t open a magazine or enter a shop without seeing something associated with it for a few glorious years back in the 1980s.

I have a hobby that perfectly reveals just how much our fearless foursome were entrenched into everyday life back then, and I’m going to share a few examples with you here today.

The hobby in question is collecting original advertising pages from old magazines and British comics – and it started when I was faced with a ultimatum from my parents!

I visited them a couple of years ago and it was one of those classic moments where you get stern faces surrounding you, and are then presented with several boxes of your childhood possessions that “need to be dealt with or sent for recycling!” Most of it I could easily take back to my own place, but two VERY large boxes contained about 10 years worth of Computer Game magazines and issues of the the weekly ‘Beano’ children’s comic.

I sat in my old room flicking through random issues I had pulled from one of the boxes and started to realize that what I was finding most interesting wasn’t the stories and articles but the frequent one page adverts, each one of them bringing back good memories and making me grin like an idiot. I eventually decided to donate the comics to my local doctors surgery, so they could be enjoyed by kids in the waiting area, but I couldn’t bring myself to let the advertisements go with them, so they were all carefully removed and a new hobby was born that day.

I have hundreds now, and it’s fascinating to see how things were presented and sold back then now that I’m an adult. As a child these pages just annoyed me most of the time and I would skip past them without a second thought, eager to keep reading the comic story or the game review I was preoccupied with.

At some point I’m going to write a piece about how inappropriate some of the adverts would seem these days, especially some of the licensed horror movie computer game adverts that they got away with placing in magazines for kids, but today we will focus on the dominance of the mighty Ghostbusters.

Food, toys, and more … they were everywhere! I have more adverts featuring the Ghostbusters than any other characters from that time, and here are 10 of my favorites: 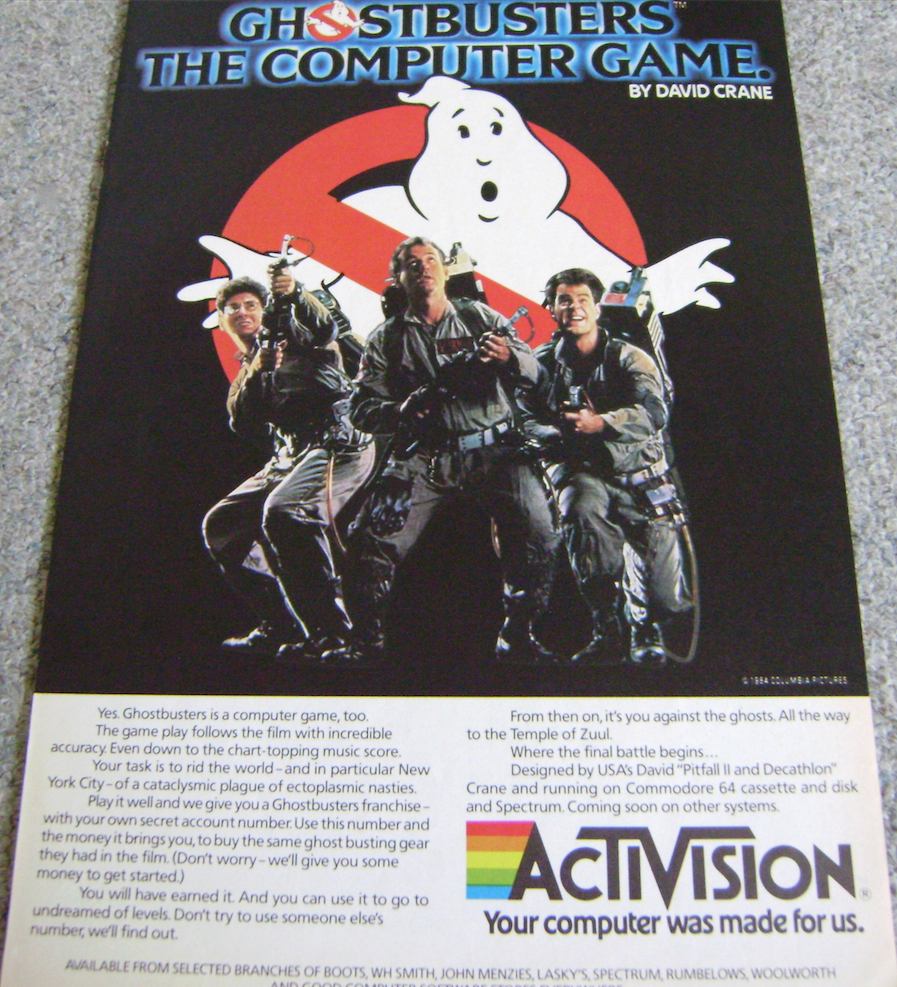 First we have two adverts promoting the official computer game. My brother and I owned a Spectrum 48k and when we bought this game on cassette we waited for it to load with unparalleled excitement and anticipation.

Most people now own wrist watches that are vastly more powerful than the 48k was, but when programmers made an effort the damn thing could deliver a very solid gaming experience (by early 80s standards). Sadly this game seemed to sell in massive numbers purely because of the Ghostbusters fever that was gripping the nation at the time, not because it was actually good. The second Ad shows just how successful it became. 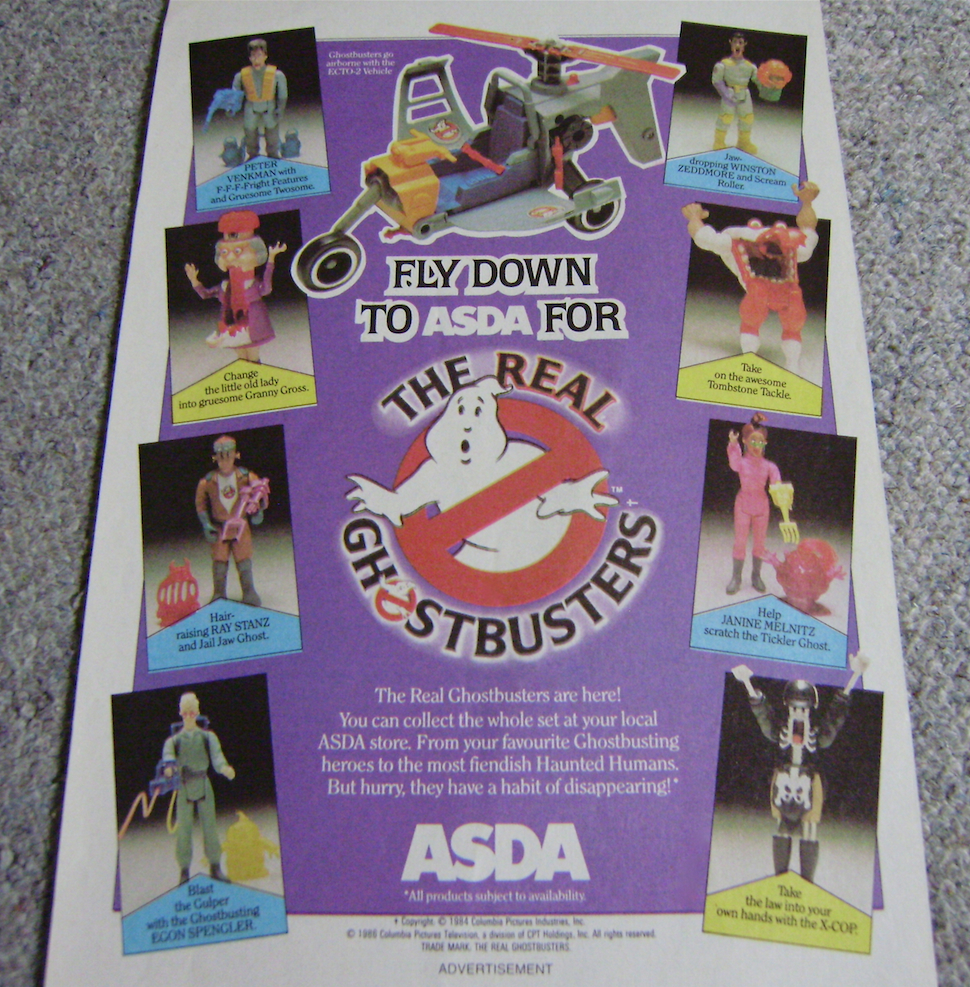 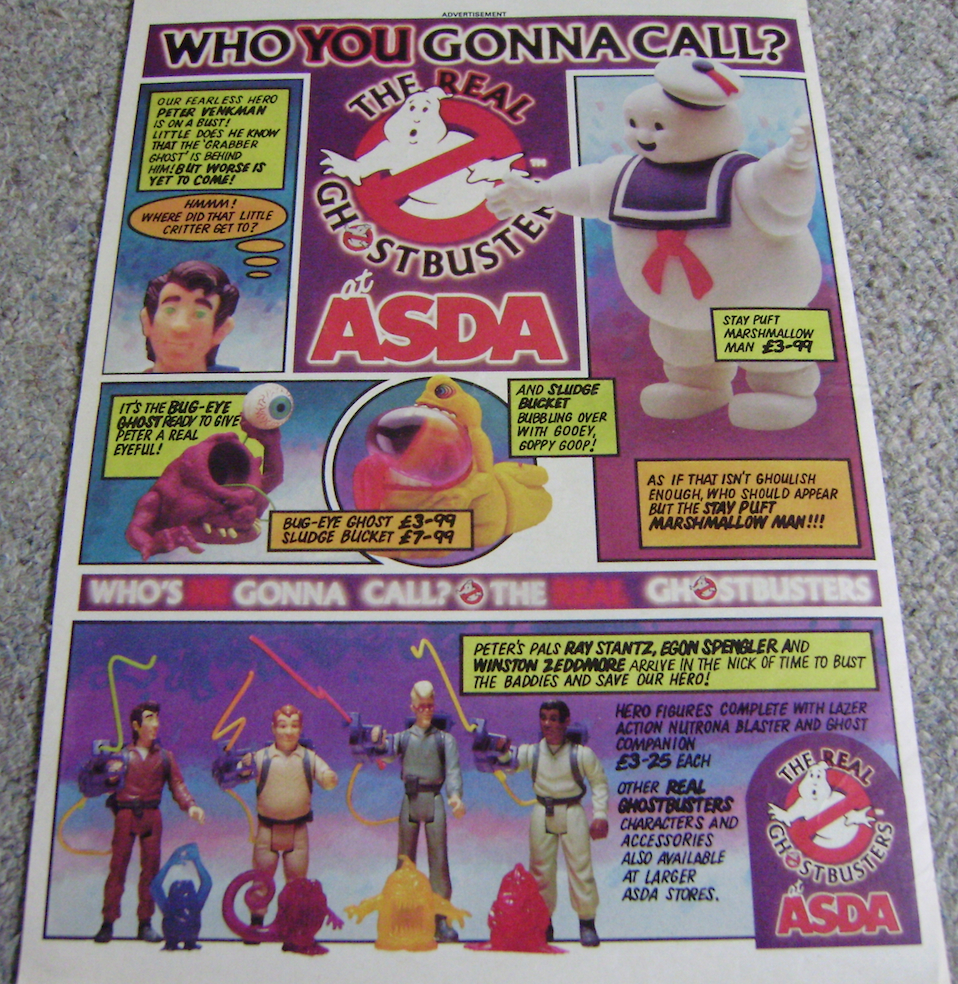 Next up are two awesome Adverts for The Real Ghostbusters figures and vehicles that invaded toy stores a few years later. That Christmas one of the most important presents I demanded from my parents was the Slimer figure. Turns out EVERY kid in the country had asked for the exact same thing mind you, so my poor dad spent weeks hunting one down across Devon toy shops.

ASDA was a fantastic supermarket at the time and is still going strong – just with less cool toys and more tinned fruit these days. 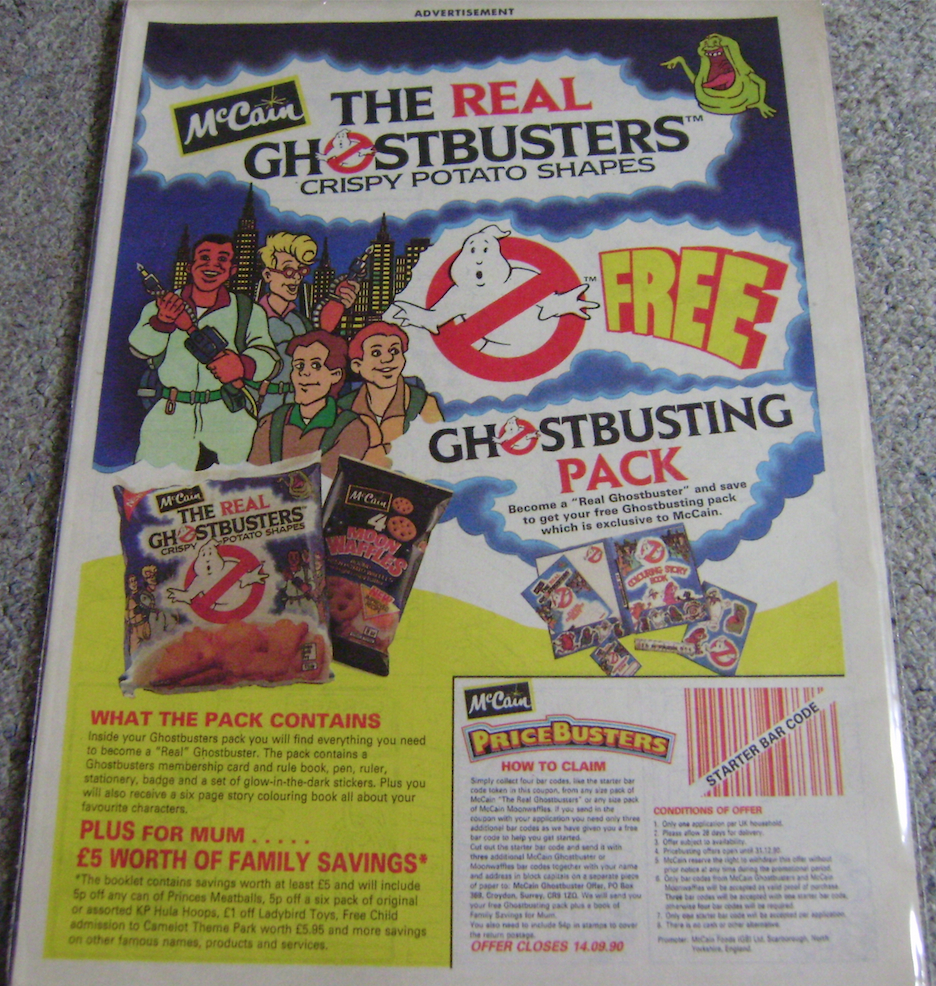 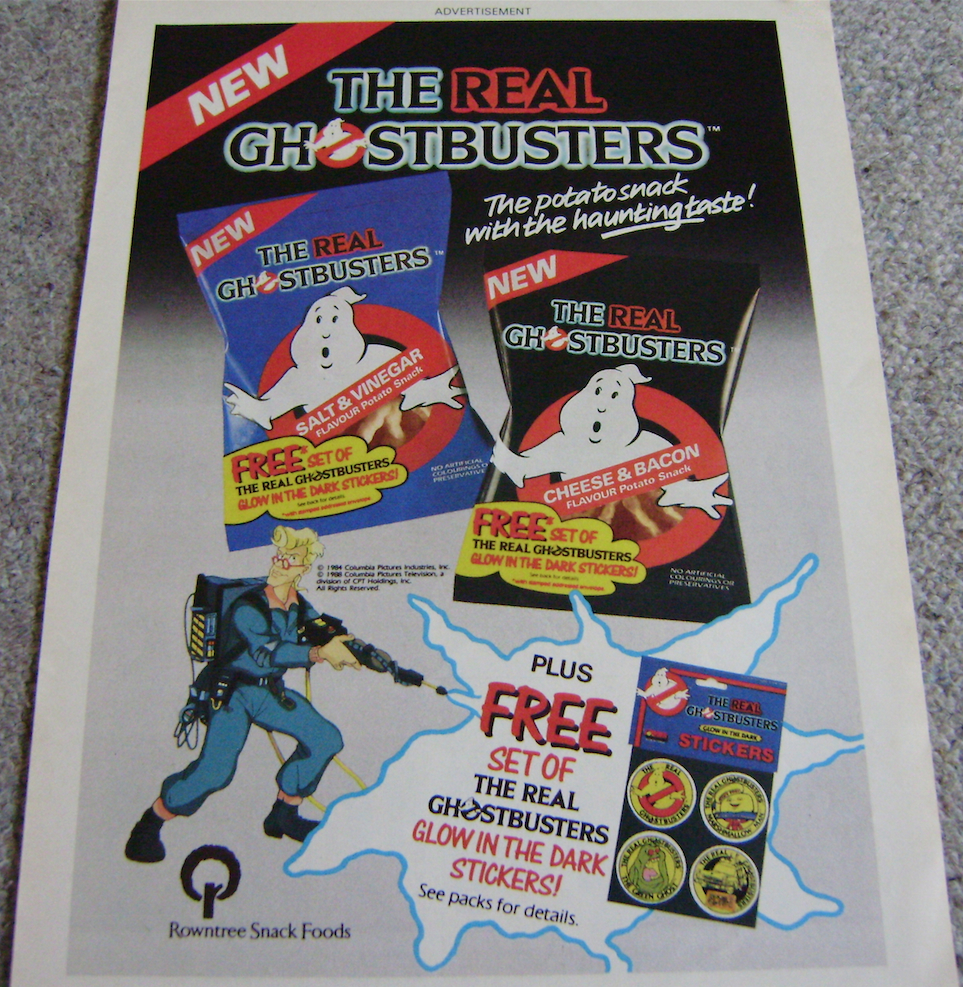 Both included tantalizing offers for mail-away goodies that ensured kids would beg their parents to add them to the weekly shopping list. 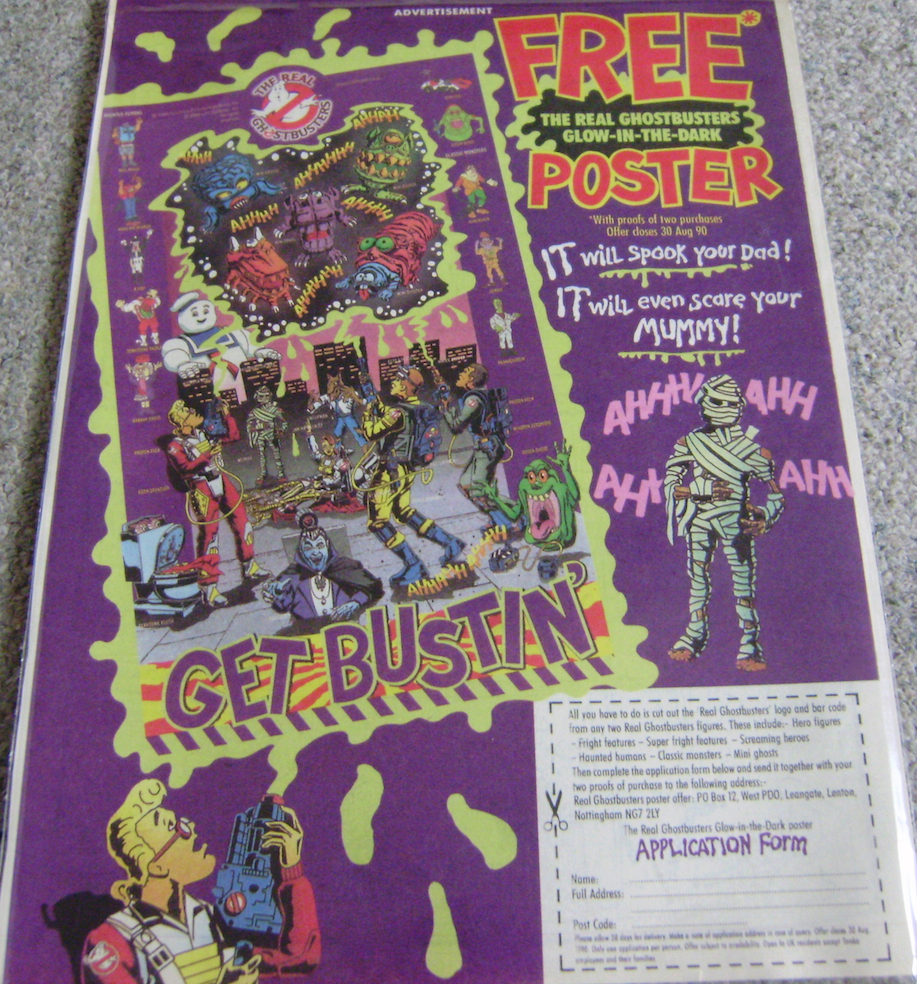 This advert promotes a mail-away offer for a fantastic ‘glow-in-the-dark’ poster featuring some of the toys. I never got around to sending for one of these but wish I had now. 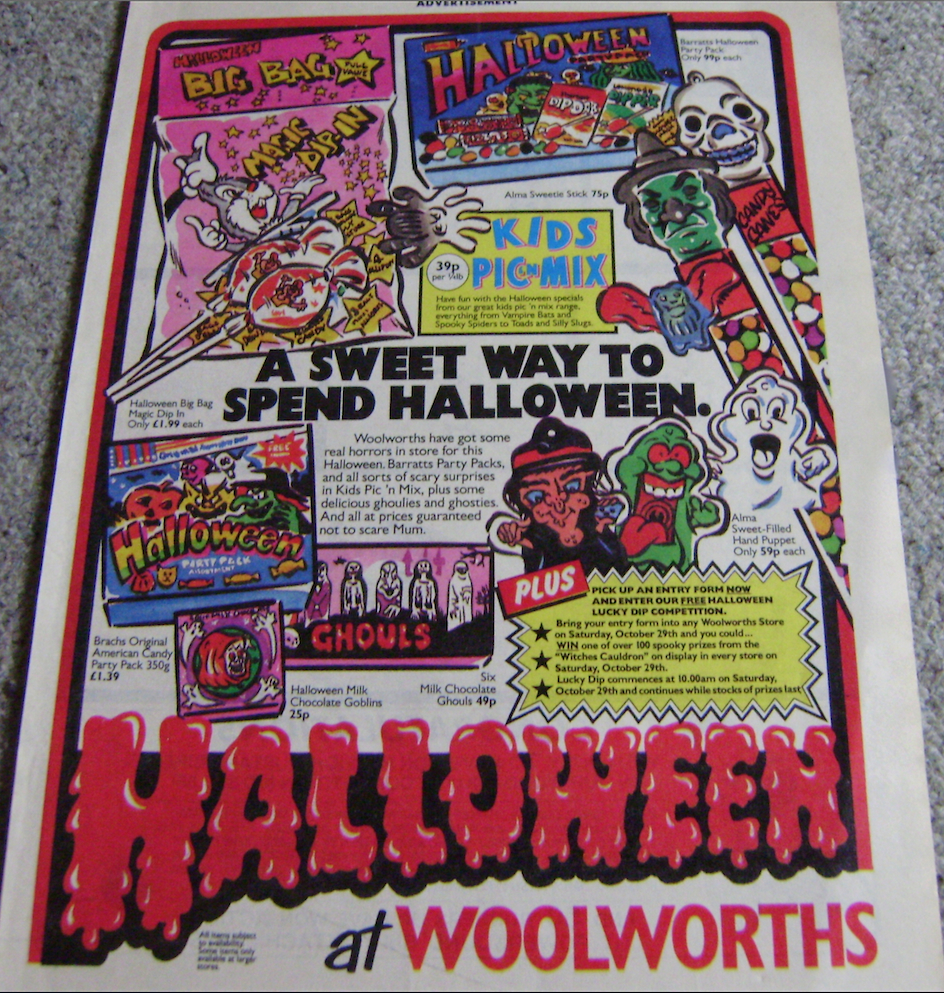 This one is slightly more random as it only features a small (and probably unofficial) appearance from Slimer, but I had to include it to pay my respects to Woolworths. It was a brilliant store that sold everything you could think of and during Halloween season they would really stock up on cool stuff. I mean look at that advert! … Doesn’t it just make you want to go there and buy candy?! 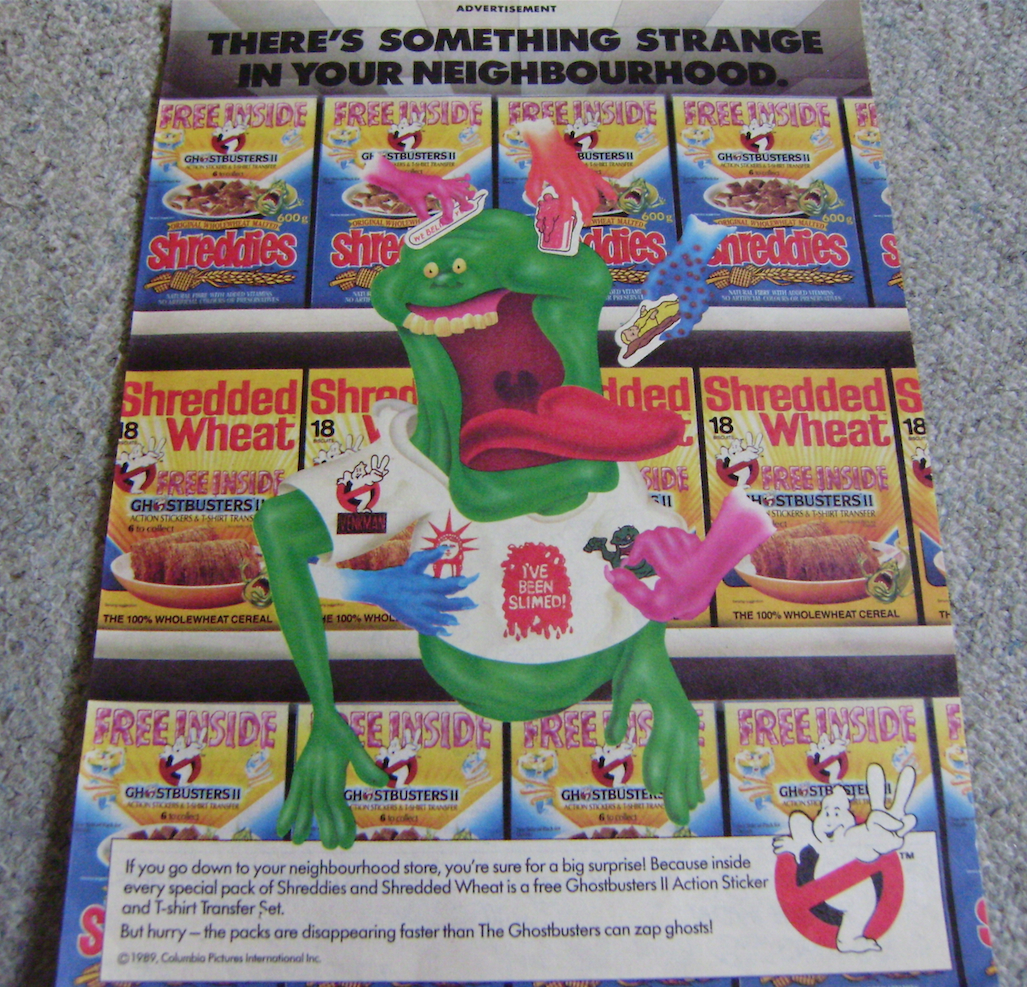 I miss the days when you would get actual gifts and surprises inside boxes of cereal. I’m not sure if it still happens overseas but here in the UK it’s slowly becoming a thing of the past. This advert is promoting the very cool stickers and transfers that could be found within boxes of ‘Shredded Wheat’ prior to the release of Ghostbusters 2. 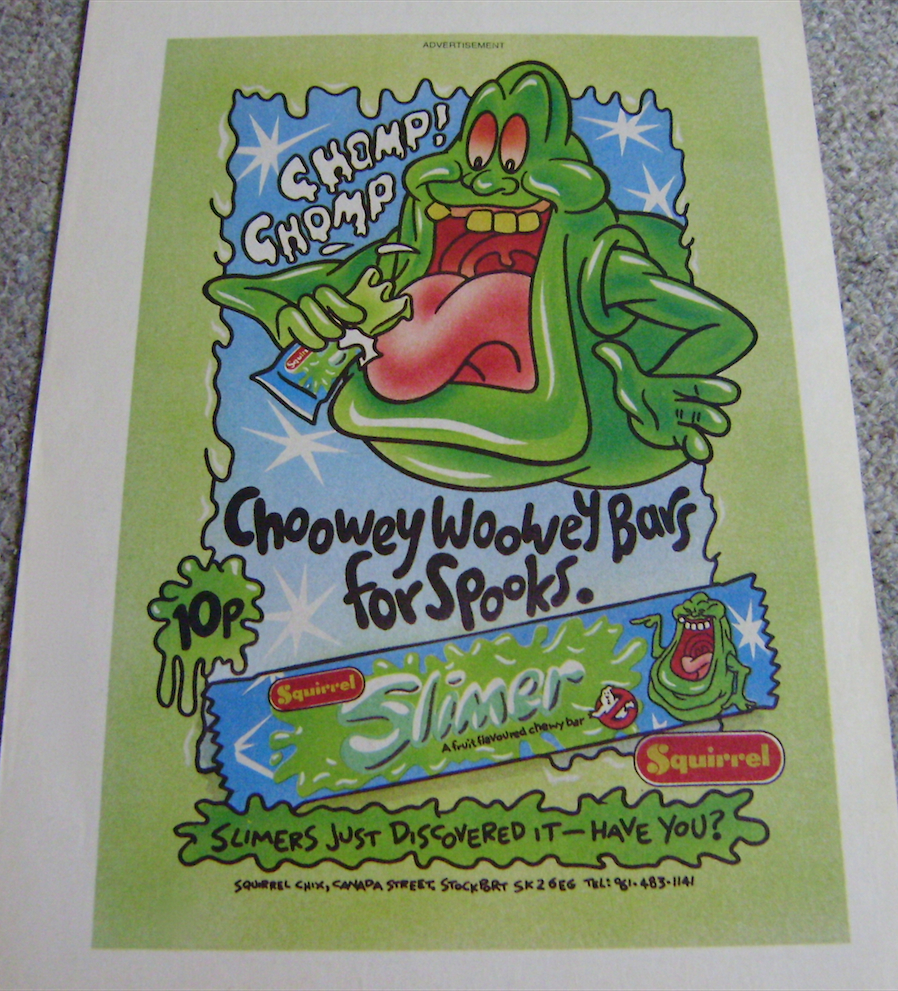 Last but not least I leave you with an advert for the Slimer ‘chewy bar’ … it was tasty and only 10p!

Man, I really want one now …