When presented with the idea of writing about my favorite horror film of all time, I must admit some hesitance on my part. How can you ever do it justice and really explain why it gets you all warm and fuzzy inside? But, being a gal who is almost always up for a challenge, welcome to Fright Night …for real. 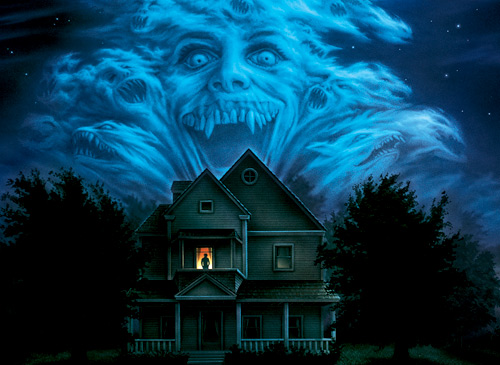 Opening in theaters on August 2nd 1985, Fright Night tells the story of a young boy named Charley Brewster who stumbles upon the grim reality that his next door neighbor, Jerry Dandridge, is a vampire. His friend Ed Thompson and girlfriend Amy Peterson aren’t on board with Charley’s plan to kill Jerry, so they enlist the help of Peter Vincent, noted TV horror host and vampire killer. Listen, this isn’t really a synopsis of Fright Night. If you’re reading this blog then chances are you’ve seen it. This is about what Fright Night means to me and why I’m nutty about it.

Fright Night has been my favorite movie since I can remember. When other girls were watching princess movies, I was watching Chris Sarandon get staked again and again. I was marveling at Stephen Geoffrey’s wolf transformation, I was feeling the plight of William Ragsdale and the intense seduction of Amanda Bearse.

It’s hard to say why any film tugs at us the way it does. I’m guessing the masterful script and direction of Tom Holland had something to do with it. But it’s always been more than that. One of the reasons that Fright Night is so beloved is because of it’s incredible practical effects.

This heart wrenching scene is one of the finest examples of practical effects gone right. The viewer watches as Evil Ed becomes a wolf, gets staked and slowly turns back into an innocent teenager. Roddy McDowall’s performance helps us to believe that this transformation is, indeed, taking place.

The audience is treated to a well written and believable script told by actors that have an incredible chemistry which only serves to help the audience believe it even more. Even though the subject of vampires is something we realize isn’t going to really happen, Charlie’s plight tugs at our heart strings because we all know what it’s like when people don’t believe us or understand the severity of a situation. It’s devastating and causes people to make rash decisions when cornered.

As a young child Fright Night inspired me. I wanted to *be* in front of the camera, to work with the make-up, to do script readings, to create a world that the viewer could fall into and enjoy. Fright Night was one of the first films that helped me realize how much I, myself, wanted to be an actress and an artist and as a result I am still creating art that is directly inspired from that long ago classic.

It isn’t so strange, you know. Every person has something that turned them on. It could be golf or The Beatles or video games or..or..or..ANYTHING! People tend to turn up their noses when you list a horror film as the inspiration for your lifes work but it’s all the same thing just wrapped in different packages.

Fright Night is funny, charming, sexy, scary, alluring and so many more adjectives. As horror fans we should be proud of the films that have helped to shape us, even if those films involve a fair amount of blood.