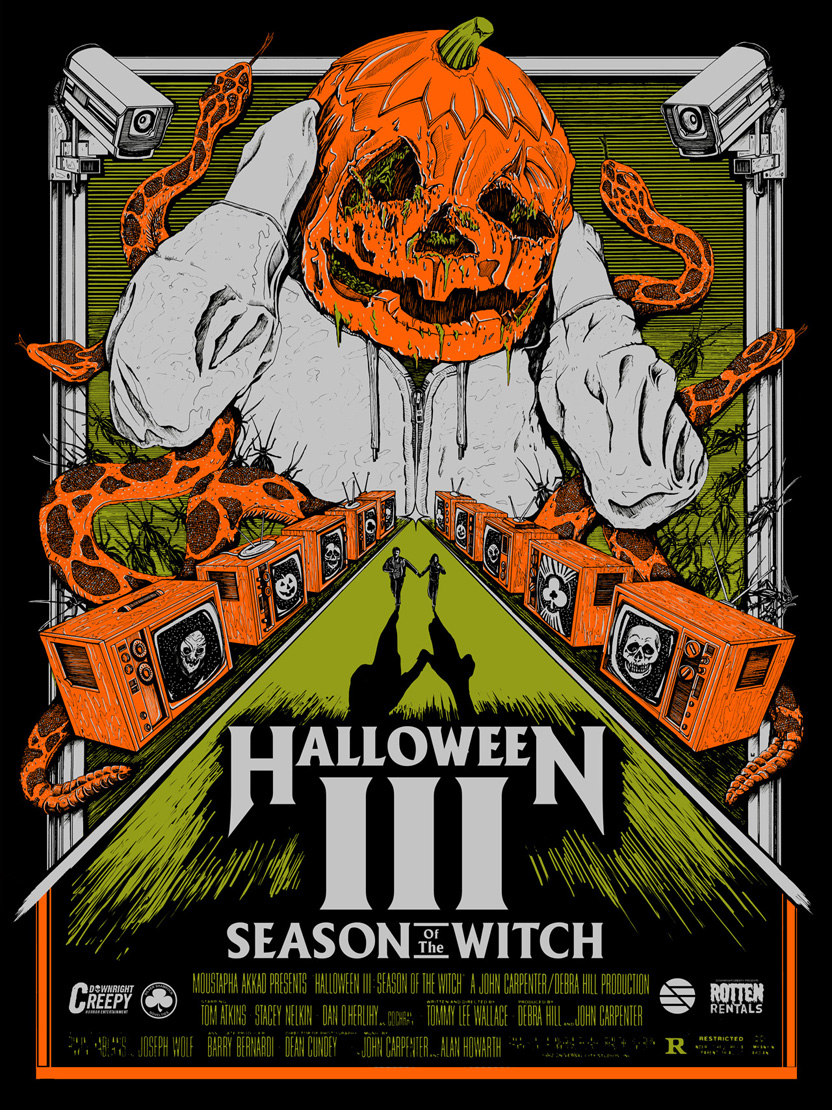 Rotten Rentals is paying tribute to Halloween 3 this season with a limited edition poster release, featuring this incredible art by Brandon Duncan. The 18″x24″ poster is selling for $40 and the art is also available on one of the company’s patented mystery packs ($20). Each mystery pack is made to look like a vintage VHS box, filled with all sorts of fun little goodies. Full color and black & white versions of the Halloween 3 packs are available, so head over there and poke around. 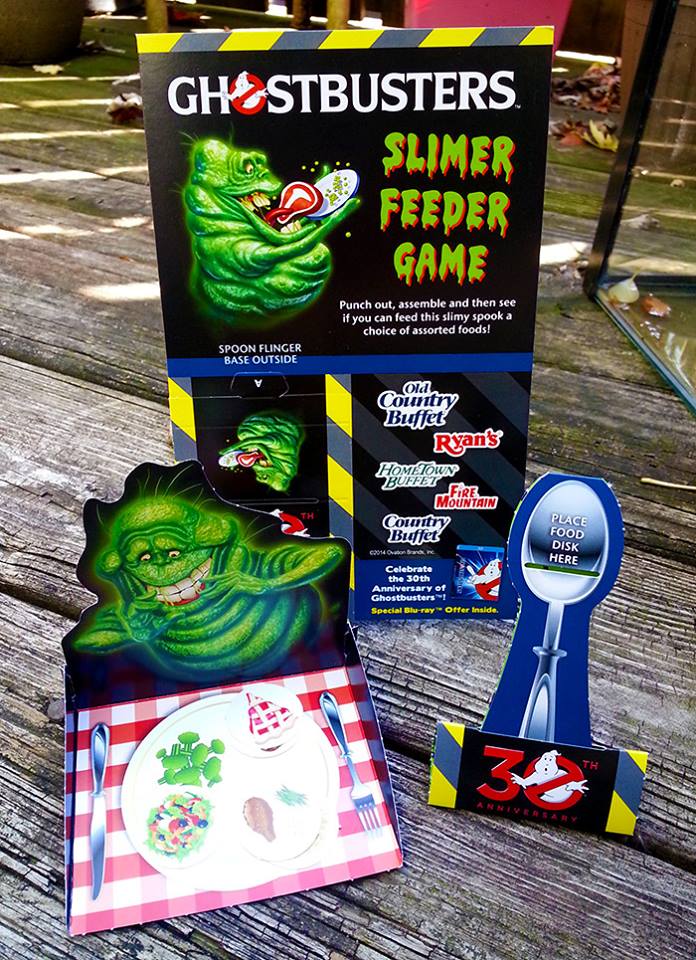 Much like Krispy Kreme, the connected restaurant chains Ryan’s, Hometown Buffet and Old Country Buffet are paying tribute to Ghostbusters‘ 30th anniversary with a special tie-in promotion, hosting themed activities through Halloween. As part of the deal, these ‘Slimer Feeder’ games were whipped up, allowing you to fling food into Slimer’s mouth. Credit for this picture of the game goes to Dinosaur Dracula, which should be a daily visit for all fans of Halloween and nostalgia. 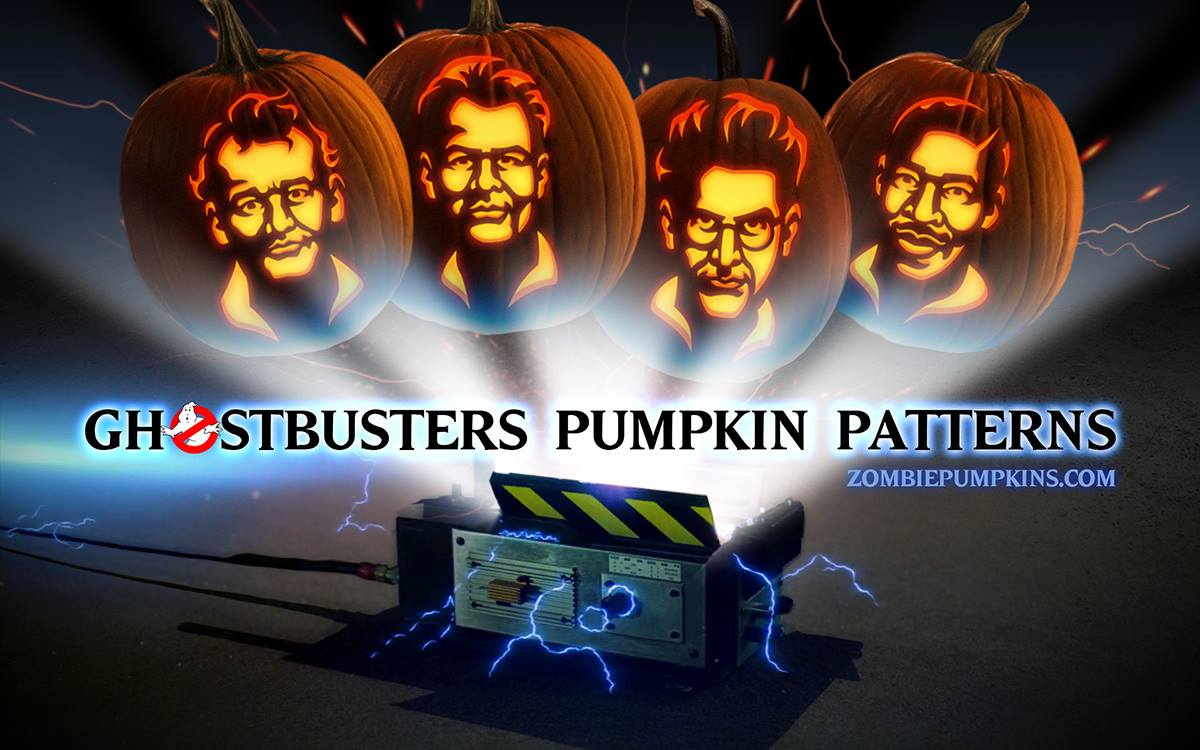 Speaking of Ghostbusters, carving pattern website Zombie Pumpkins has unloaded a slew of new patterns this year, including all four of pop culture’s favorite ghost hunters. Also new for the 2014 season are patterns of Slimer, Michael Myers and even The Walking Dead‘s Carol. If you want the coolest jack o’lanterns on the block, Zombie Pumpkins is the place to get your patterns, so check ’em out! 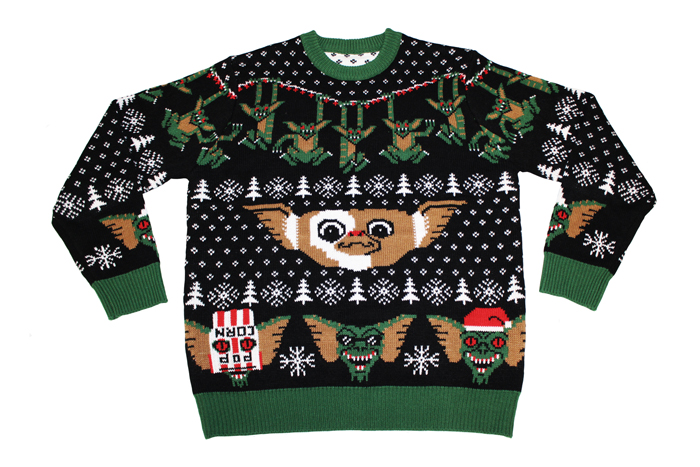 Another fan-favorite film celebrating its 30th anniversary this year is Gremlins, though fans don’t seem to be heaping as much love onto it as they are Ghostbusters. Over the weekend, Mondo corrected that with this ‘ugly Christmas’ style Gremlins sweater, which is now up for pre-order ($85) and will ship in December. The sweaters run from XS to 3XL, and I can’t think of a better gift for yourself this holiday season. 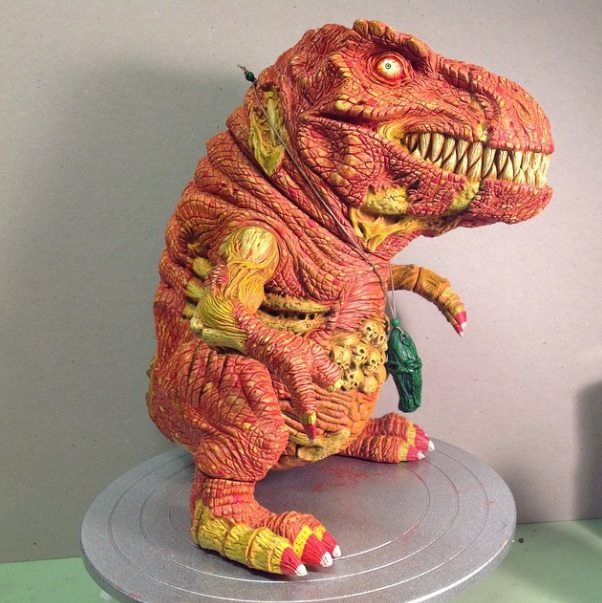 Madballs illustrator James Groman is the creator of the zombified dinosaur toy known as Rotten Rexx, and this here is a special Halloween variant that he designed for a show this past weekend at the Toy Art Gallery. Dubbed ‘Pumpkin Patch Rexx,’ the Halloween edition of Groman’s latest creation is limited to only one piece and can be purchased over on the gallery’s website, for $1,000. A bit out of my price range, but is that thing a beaut or what?! 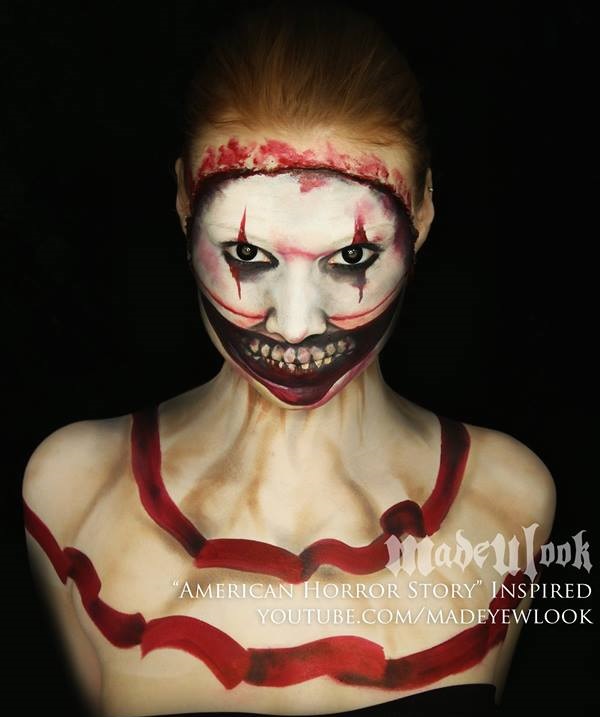 If you’re anything like me, you’re already addicted to American Horror Story: Freak Show, only three episodes into the new season. Though he’s got a lot of stiff competition, there’s no doubt that the show’s Twisty the Clown is already one of the most terrifying of them all, sure to give nightmares even to those who normally aren’t scared of red noses. Artist Alexys Fleming became Twisty this week using only makeup, and you simply have to see the transformation to believe it. Head over to the MadeYewLook YouTube channel to watch the amazing tutorial video. 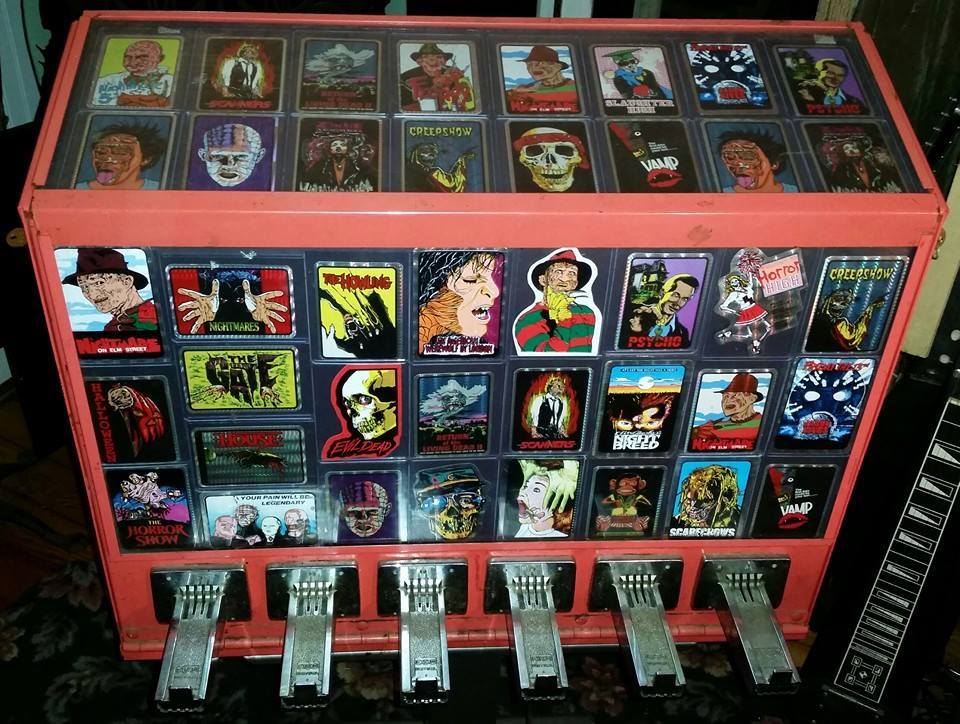 Apparently, from what I understand, someone stumbled upon this vintage vending machine in New Jersey recently, and this drool-worthy image has unsurprisingly been shared across social media in the wake of the epic find. Yes, that is an entire machine filled with old-school prismatic horror stickers, looking like it traveled from the 80s right into the present day. If that’s not the holy grail of horror finds, then I just don’t know what is. For his sake, I sure as hell hope whoever snapped the photo somehow ended up leaving whatever store it was in with the whole damn thing strapped to his back. Worth the hernia. MORE THAN worth the hernia. 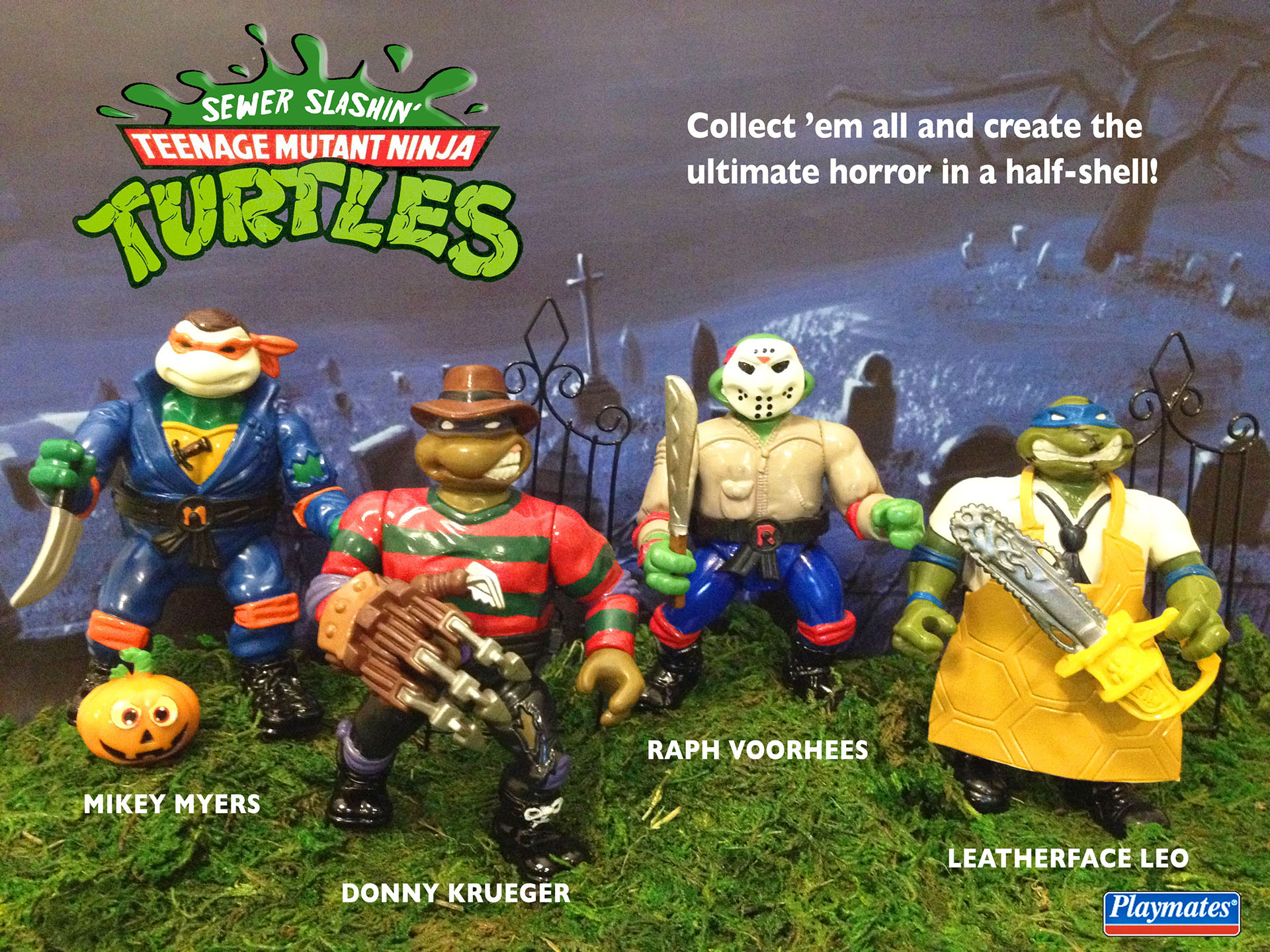 There’s a good chance you’ve already seen these Teenage Mutant Ninja Turtles custom figures already, but they’re so damn nice that they’re worth looking at twice. Back in the 90s, the Turtles mashed up with the Universal Monsters and even Star Trek for oddball toy lines, and these fan-made creations imagine a world wherein they came face-to-face with horror’s biggest icons. Unfortunately, they’re not for sale, but you can see more pictures and learn all about them over on their creator’s website, Chicago Toy Collector.

Have a greet weekend, friends. We’ll be back for more Halloween fun on Monday morning!