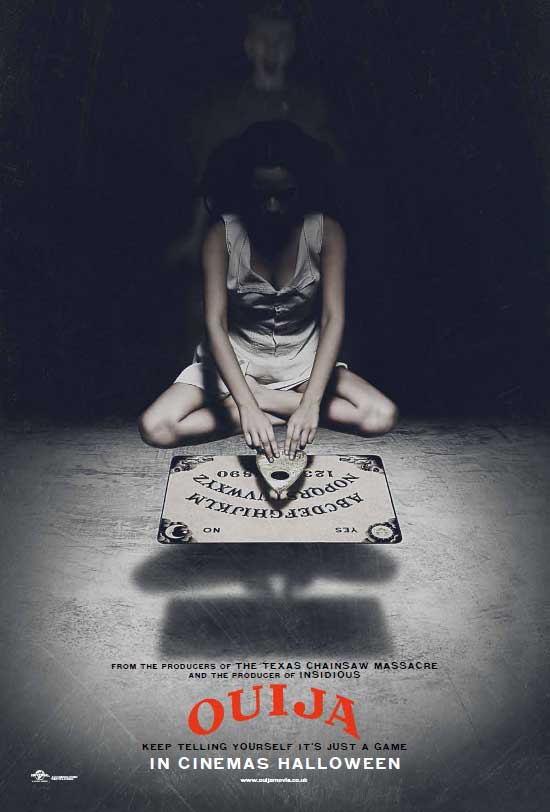 Theatrically released horror has been pretty awful in 2014, the box office inundated with endless clones that have all grabbed for the same slice of that sweet paranormal pie.

When Hollywood finds a formula that works, they hold onto it like a drowning man holds onto a life preserver, and the low cost-high profit formula of paranormal horror is one they’ve had a death grip on for years.

Producer Jason Blum and his Blumhouse Productions label have been leading the charge ever since they got their hands on the independently made Paranormal Activity, and the company has over the years mastered the art of turning tiny budgets into massive piles of money.

The Blumhouse formula, boiled down to its essence, is to make movies so cheaply that they’ll turn a big time profit no matter how little they actually pull in at the box office, and though that’s great for Blum and company, that’s not so good for the rest of us.

When there’s such little risk attached to any give movie, the quality of that movie always suffers as a result, as the guaranteed profitability leaves little need to take any chances or break any new ground. As less and less chances are being taken, theatrical horror has become more and more generic, and filmmakers have gotten all too comfortable serving us the same fast food over and over again.

If there’s a bottom to this particular barrel of generic paranormal horror, it’s just been found. Ouija represents Blum and his team scraping the bottom of that proverbial barrel, and watching their latest attempt to scare dim-witted teenagers is like watching something die. And that something is your desire to ever see another theatrical horror movie again.

A silly board game becomes a silly movie in Ouija, which centers on budding scream queen Olivia Cooke’s Laine Morris. When her best friend mysteriously dies after messing with one of the titular spirit boards, Laine and her other friends use the same board in an effort to make contact with their dead friend, but soon realize that they’ve opened up a portal to a hellish past. Because duh.

The best way I can sum up the experience of watching Ouija is that it’s a 90-minute highlight reel of everything wrong with the horror genre, the sort of film that thrives on unoriginality at every turn. Like a kid who’s deathly afraid of coloring outside the lines, Ouija is terrified of taking chances or bringing the smallest iota of a new idea to the table, rendering it a total bore that tests the patience of anyone who’s ever seen a horror movie.

If there’s a moment in Ouija that’s not totally idiotic then I surely blinked and missed it, as the movie reveals right from the get-go that it’s catering to the least intelligent members of the audience. Before aforementioned friend dies, she outright tells Laine that she’s been messing with the board, and is clearly spooked by it. And yet, after her horrific demise, it still takes Laine and her friends DAYS to realize that… their friend had been messing with a Ouija board. I shit you not.

Like all bad horror movies, the characters in this one are as cookie cutter as they come, barely brought to life by acting that’s as wooden as the board the movie is centered on. No emotional connections are ever formed with any of them, and it’s quite frankly hard to even tell them apart. I consider myself a pretty smart movie-goer and yet it took me a while to realize that Laine and the dead girl were friends rather than sisters, which is a testament to how poorly executed every little detail about the movie is. It’s tough to get a grasp on who’s who, and worse yet, it’s impossible to even care.

Olivia Cooke, god bless her soul, is a damn fine actress, but you’d only know that if you’d previously seen her in other roles – such as Bates Motel‘s Emma. Cooke can’t seem to catch a break when it comes to big screen horror, and in Ouija she’s a good actress stuck in a movie that’s very much beneath her. The screenplay feels like it was written in crayon by a five-year-old, and there’s only so much an actor can do with such piss poor material.

So loaded is Ouija with the tropes of the paranormal horror sub-genre that you feel like the entire film is the handiwork of those businessmen from Cabin in the Woods. You can literally visualize them plugging in all the familiar elements inherent to ghost stories, and damn near every single one of those aggravating things is on display in the film.

There’s the creepy attic, the creepy basement and the creepy doll, and yep, there’s even the old-aged Mexican woman who knows everything about contacting dead people. How about the ghosts with impossibly wide-open mouths? Check. The psych ward patient who offers help to the main characters?! Check. What about people being pulled off into darkness by an unseen force? But of course that’s another check.

Perhaps the biggest sin Ouija commits is that it renders the titular spirit board a complete joke, turning an admittedly spooky object into one of the least scary villains in horror history. I’ve always found there to be something creepy about Ouija boards, and the one I own is kept in the basement, as I don’t feel comfortable when it’s sitting around the house. Granted, I don’t believe in their dead-contacting abilities, but I just prefer not to mess with them.

I don’t know how they pulled it off, but as I sit here typing up this review, I find myself no longer creeped out by the board that resides in my basement. So silly and eye-rollingly bad is Ouija that it completely exposes the silliness of those boards, making me wonder why I was ever even scared of them in the first place. There’s nothing scary about a board game, and Ouija reminds you of that fact, rather than distracts you away from it.

When I imagined Hollywood turning the board game into a movie, my mind immediately conjured up a family-friendly adventure in the vein of The Goonies, with a cast of children using the board to make contact with the other side. And it’s funny because Ouija does oftentimes feel like a movie that was supposed to have a much younger cast than it does, as I frequently got the sense that I was watching a Goosebumps episode – only, for some reason, the kids were replaced by adults.

Maybe it’s because the dialogue is so childish and poorly written, or simply because it was clearly made for a younger audience, but Ouija very much feels like the sort of movie that would’ve benefited from centering on children. You get the sense that fun could’ve at least been had if that were the case, but since it’s not, the movie comes off like a total insult to anyone over 12. In other words, it’s got all the corniness of a Goosebumps episode without any of the charm.

Ouija, more than any other recent movie like it, represents the final nail in the coffin of theatrical horror, and serves as yet another reminder that true horror fans are better off staying home when the next big movie comes out. The only place you’re going to find good horror these days is on TV and VOD, so you’re better off popping a bag of popcorn and making friends with your couch, your remote and the streaming platform of your choosing.

The sad truth is that theatrical horror movies aren’t made for horror fans anymore, they’re made for bored teenage girls who want to be caught off guard with cheap jump scares, while they’re busy yapping away and texting their friends. That’s who crap like this caters to, and I can almost guarantee that the target audience will not only eat it up, but they’ll also go out to Toys R Us and buy a Ouija board immediately afterward.

You win, Blumhouse. You win again.