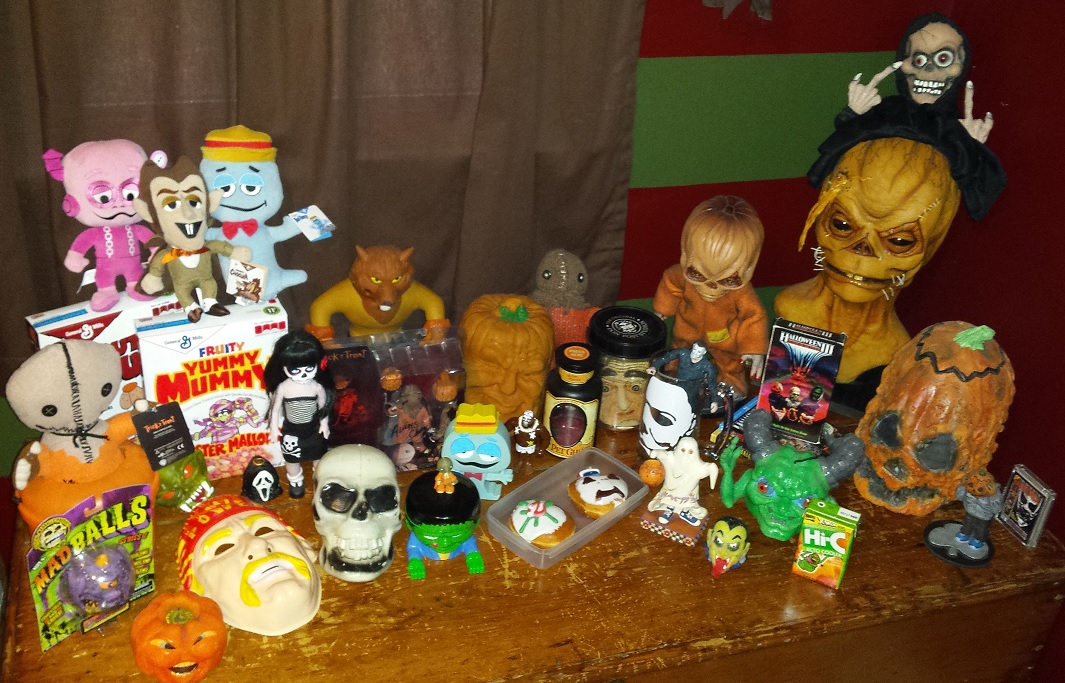 An annual tradition started by Matt from Dinosaur Dracula a couple years back, the basic idea behind the so-called Halloween Mood Table is to create a shrine to Halloween in your home, essentially as a place of Halloween worship. When your spirit is feeling low, you simply look at the shrine and VOILA… it’s completely restored to 100%.

This year, Matt has encouraged others to get in on the fun of building Halloween Mood Tables of their own, and I decided to take part for the very first time. Truth be told, it’s sheer laziness that has resulted in me never building one of these in the past, but it’s something I’ve always meant to get around to doing.

The surface I chose to decorate is a vintage wooden chest that sits in the corner of my office, which has become the place where I stash anything and everything that doesn’t fit on my walls and toy shelves. Quite frankly, the contents of the chest could be turned into a blog post of their own, as the thing is stuffed to the top with oodles of drunk convention purchases that I regretted in the morning.

The chest made the perfect surface for my Halloween Mood Table for a couple of reasons, the first of which being that there’s a whole lot of decorating room on the top of it. Of course, this means that I can’t open the chest until after Halloween, but who really wants to relive those convention regrets anyway? What the hell am I going to do with Alex Vincent’s autograph?

In addition, the fact that it’s in my office means that I have a constant source of Halloween inspiration staring me right in the face, which should help out a whole lot as I sit here typing up endless posts. Hell, I’m already feeling a lift in my Halloween spirit by just being in the presence of this thing, so I guess that means I must’ve done it right – though Matt notes that there is no wrong way to build one of his patented mood tables.

My surface chosen, I spent the last hour scavenging my house for objects and relics that reminded me of Halloween, and then another hour trying to take a picture of the table that didn’t look like complete shit. I’m not entirely happy with the photo I ended up with, but it’ll have to do. There’s only so much time in the day, after all.

In an effort to turn this into a blog post rather than an Instagram post with an unnecessarily long caption, let’s take a closer look at a select few objects on my 2014 Halloween Mood Table, shall we? 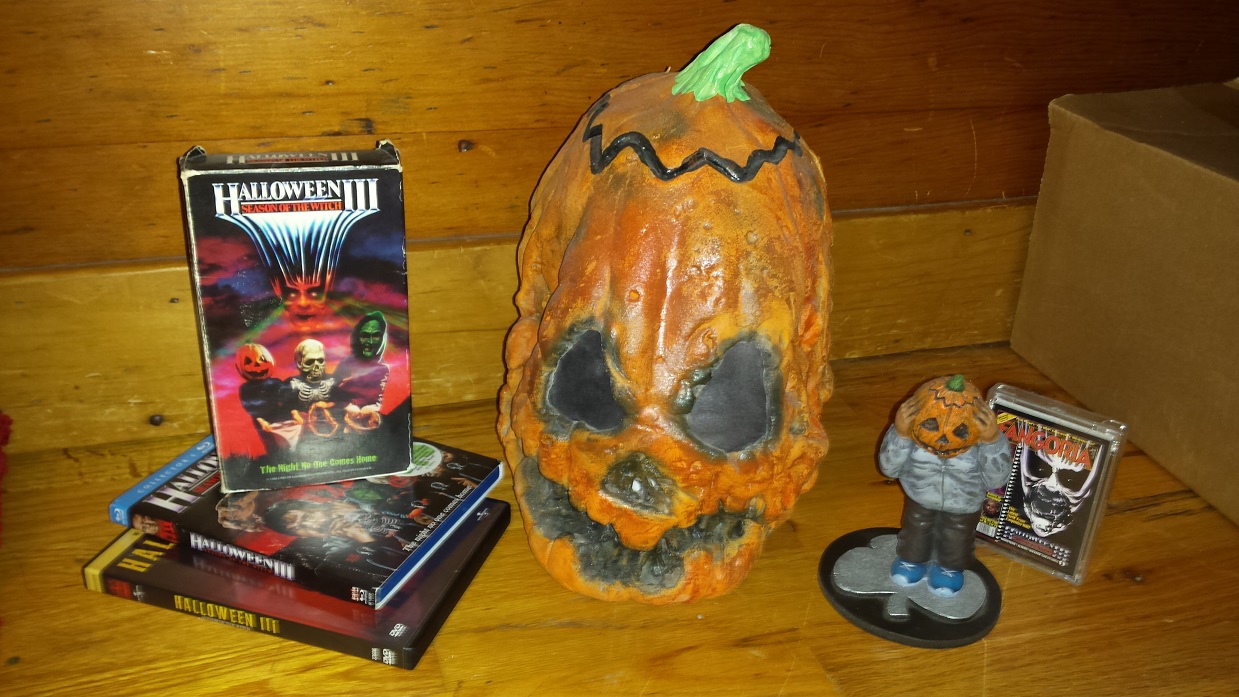 I know this is probably sacrilege to say but my favorite sequel in the Halloween franchise is Halloween 3, the one that everyone hated until they realized it’s way better than watching Michael Myers chase little kids. I’m such a fan of the movie that I have a Halloween 3 shrine in my office all year round, comprised of a few home video copies, a rotten Silver Shamrock pumpkin mask and a ‘Little Buddy’ statue. Oh and that’s a set of Fangoria trading cards to the right, with the Halloween 3 card serving as the cover. 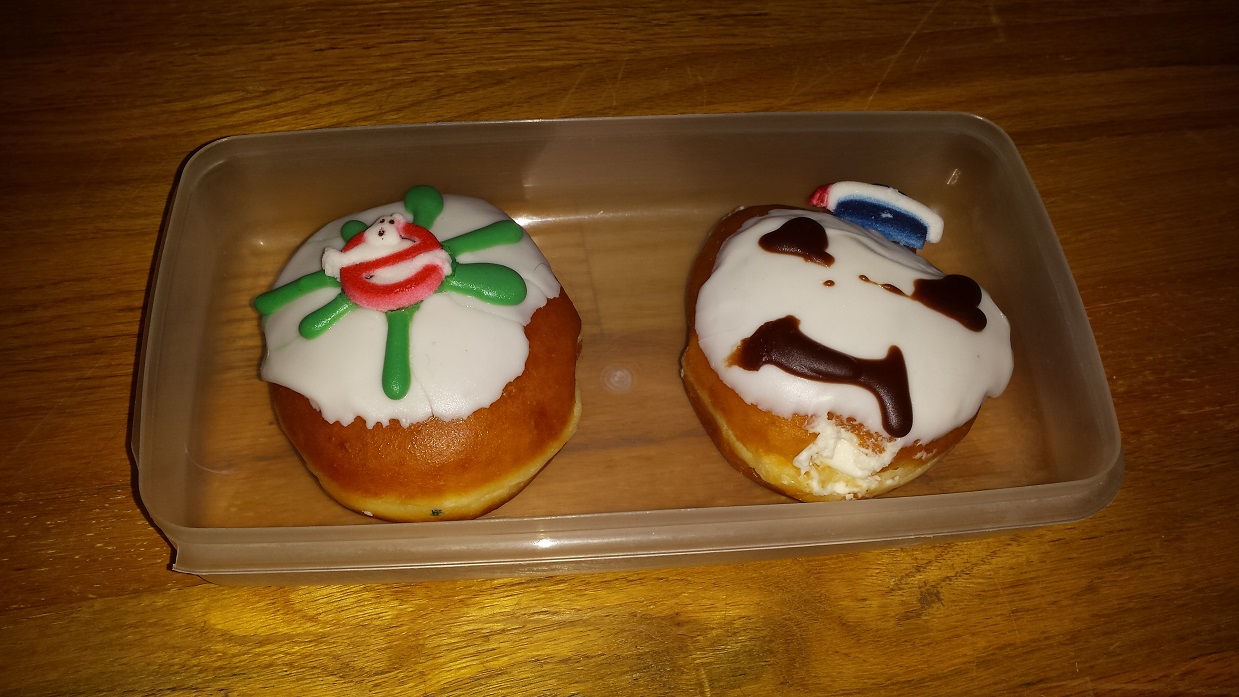 Though I would advise against adding sugary dessert treats to your mood table, for obvious reasons, I couldn’t help but add my newly acquired Krispy Kreme Ghostbusters donuts to mine. While General Mills won last year’s Halloween season with the return of Frute Brute and Yummy Mummy, Krispy Kreme definitely won this year’s with these bad boys, loaded with Stay Puft-inspired marshmallow filling. There are no Krispy Kremes near me so it wasn’t easy to get a hold of these, and I must thank my brother’s girlfriend Jess for coming through and making sure I didn’t miss out on the joy of holding them. Now, do I go ahead and eat them or save them as perishable collector’s items? That is the question… 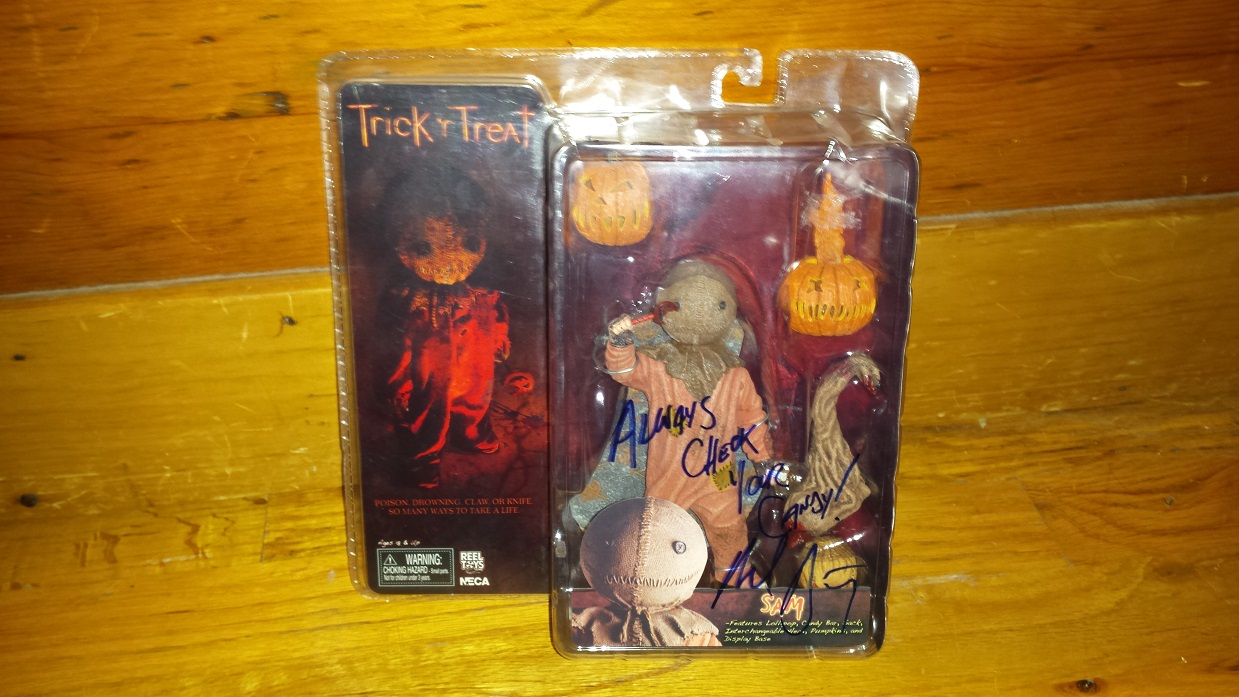 One of my favorite Halloween season memories in recent years was meeting Trick ‘r Treat writer/director Michael Dougherty at the October 2009 Big Apple Comic Con. My wife and I mostly attended the event to meet him and see the movie on the big screen, and we were incredibly bummed when we couldn’t find his table ANYWHERE in the place. Though we feared that we missed our opportunity, we ended up bumping into Dougherty later in the night, and he graciously signed our Sam figure free of charge. It was as if it was meant to be, and I’m happy to report that Dougherty was as cool as you’d expect the guy who made Trick ‘r Treat to be. 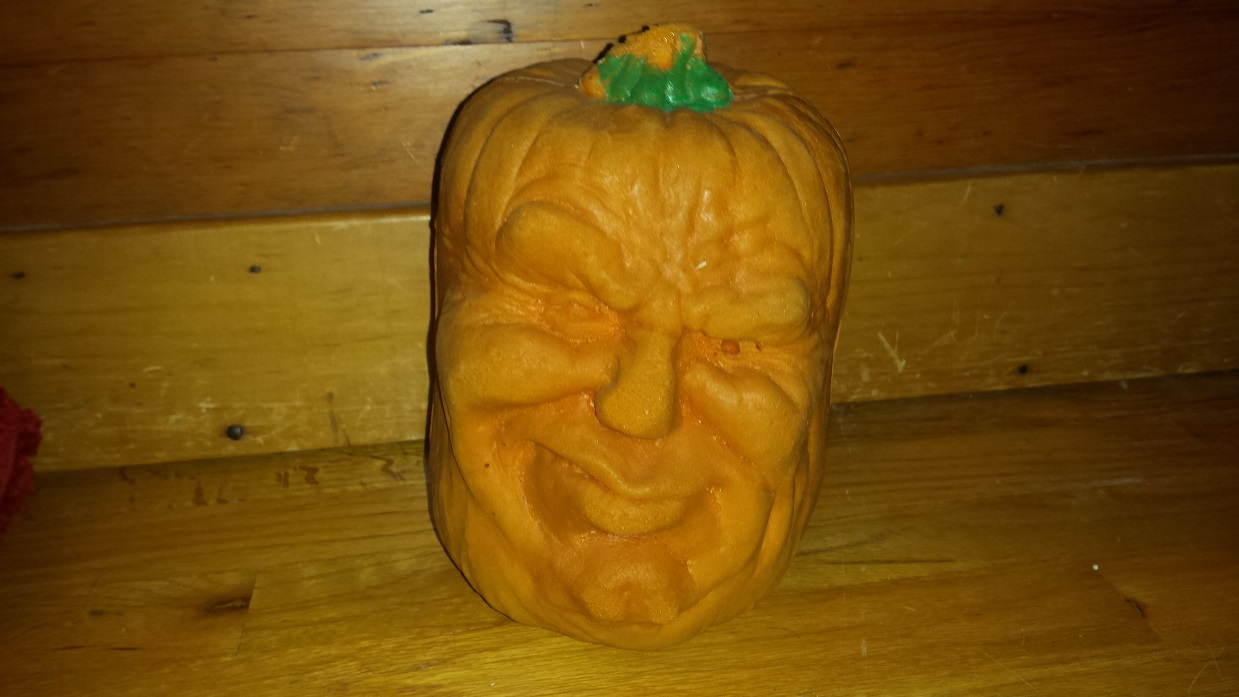 If there’s any Halloween decoration that I treasure more than any other it’s this squishy pumpkin head, which has been in my family for as long as I’ve been. Only a few years back did I realize it’s part of movie makeup artist Todd Masters’ Oh Lantern Family line, pre-carved foam pumpkins that were put out by ‘Pumpkin Productions’ in the late 1980s. Story goes that Todd originally carved the characters in an effort to get gigs in Hollywood, and people ended up digging them so much that he ended up mass producing them. These things are pretty hard to come by, as not all that many were made before the line was discontinued. As a kid, I always thought this one looked like “Hacksaw” Jim Duggan, which felt important to type right now. 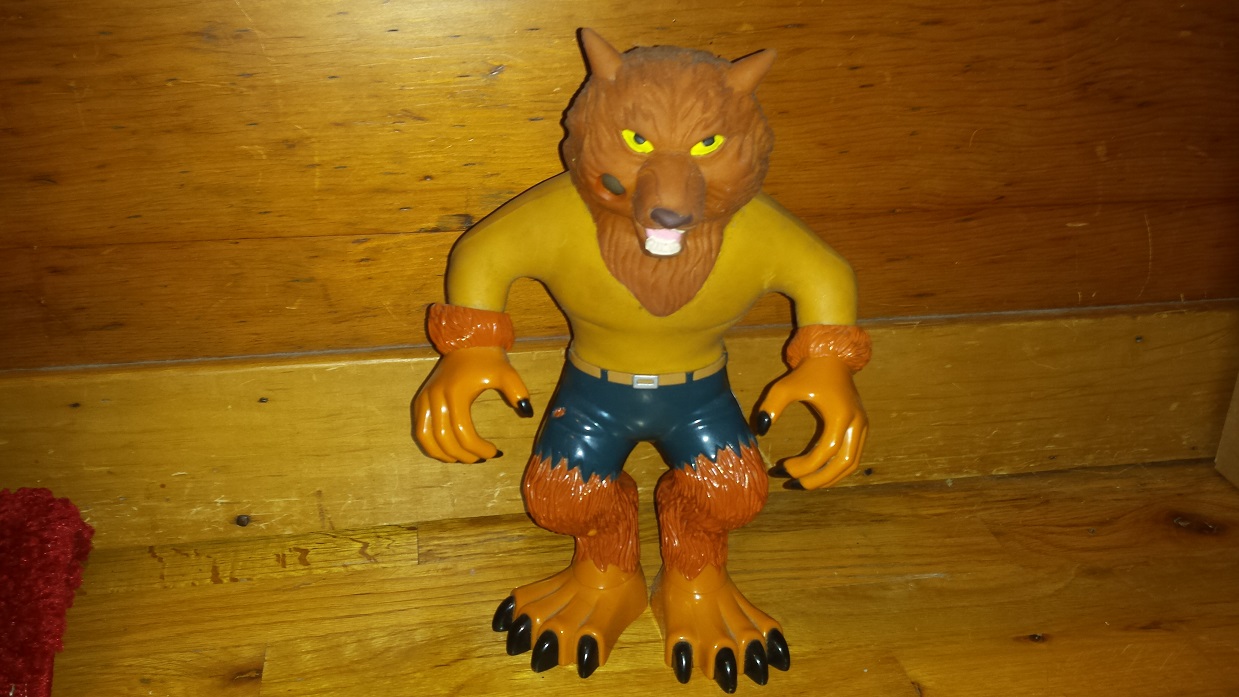 Halloween Mood Tables aren’t just about Halloween-themed items, but rather anything that helps put you into the spirit of the season. That’s why I wanted to spotlight this Wolfman toy, which was a part of Manley Toys’ Stretch Screamers line. Released in the early 2000s, they were monster-themed versions of the popular Stretch Armstrong toy, with plastic hands & lower bodies and stretchy heads & upper bodies. When you squeeze this guy’s head, an ooze bubble comes out of the hole in his face, and a press of a button on his leg even unleashes a werewolf howl. I picked up a handful of these at a yard sale a few years back, and though they reek of musty old basement, I don’t love them any less for it.

If you build your own Halloween Mood Table this year, drop us a comment below with a link. And of course, be sure to link to Dinosaur Dracula within the post, as Matt is the one who came up with the idea.

Now that I’ve built one for myself, I can 100% confirm that doing so lifted my Halloween spirit to untold heights. So I strongly encourage you to follow suit, no matter the current level of spirit that resides within you. If nothing else, DO IT FOR YOUR INNER CHILD!