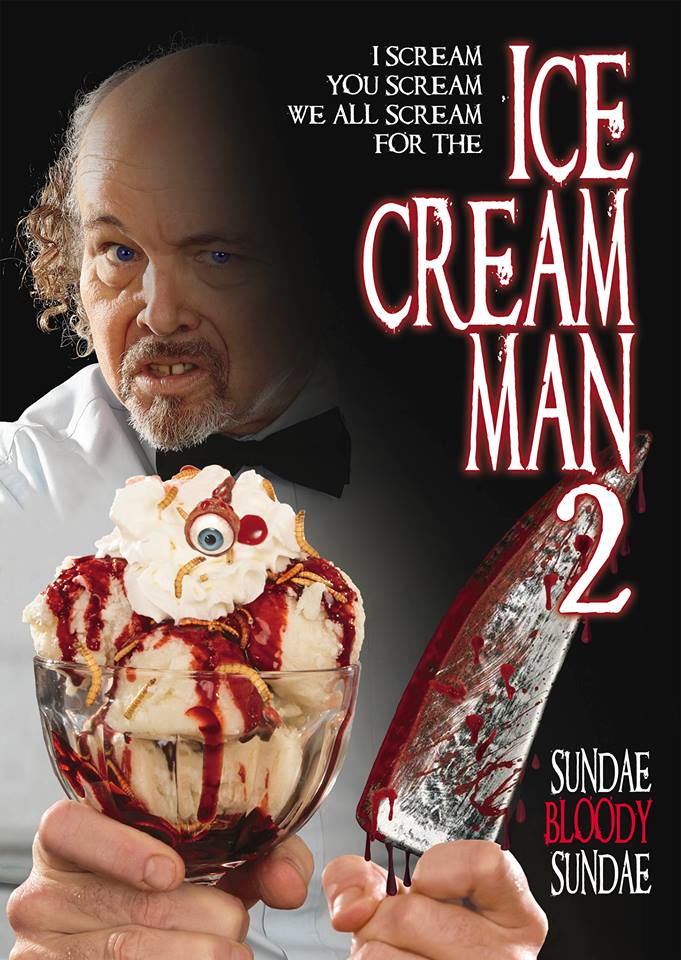 All horror fans tend to have that one special movie that they love more than anyone else in the community. For me, that movie is 1995’s Ice Cream Man.

I’ve been writing blog posts about Ice Cream Man for the last few years, including one here on Halloween Love, and it’s just one of those movies I love to talk about and convince people to watch.

If friends are over, and we’re all drunk, it’s typically the Ice Cream Man DVD that I’ll slide into my Playstation 3, as I’m always eager to force my special little guilty pleasure onto others.

Directed by Norman Apstein (who also helmed such classics as Edward Penishands and Sperm Bitches) and starring Ron Howard’s loveable brother Clint, Ice Cream Man is the story of Gregory Tudor, a demented ice cream man whose traumatic childhood has led him to add the local children to his confectionery treats.

Here in the horror community, I’ve essentially become known as the unofficial leader of the nonexistent Ice Cream Man Fan Club, and so it’s pretty common that I get messages on Facebook whenever anything pops up pertaining to the film. You can imagine my surprise when I opened up my inbox last week to discover a link to an Ice Cream Man 2 Kickstarter campaign, and I’m pretty sure pigs started flying in that very moment.

Due to the recent horror fan embrace of Ice Cream Man (I’ll take at least a little of the credit for that!), Howard and Apstein have decided to try and get a decades-later sequel off the ground, taking to Kickstarter in an effort to raise the money needed to make it happen. As soon as I opened the link, I knew that I needed to talk to Apstein and learn more, and I was delighted when he agreed to an interview.

Check out the Halloween Love Exclusive chat with Ice Cream Man director Norman Apstein below, which is loaded with information you won’t find on Kickstarter!

Let’s start with the obvious question: Why now? Why a sequel to Ice Cream Man, nearly 20 years later?

It took twenty years to become a cult hit! Clint and I had been joking around about it for a while: “son of Ice Cream Man”, “Clone of Ice Cream Man”. I always found it hard to believe it had gained an audience after all this time, but Clint kept insisting. He’s the one who got the most feedback being the face of the movie. He’d tell me he was constantly recognized from that movie much more than the others. The tipping point was seeing two 20 year olds of a friend of mine watching the movie and cracking up all the way through. I thought why not, let’s put it up and see if people really want another.

The ending to Ice Cream Man seemed to set up for a sequel, which of course never came. Were there ever plans in motion back then to continue the story, if the film did well?

Of course. Who knew it would take 20 years!

**Here what’s Apstein had to say about the plot of a potential Ice Cream Man 2, in the March 1995 issue of Fangoria: “There’s definitely sequel potential. The boy who Clint kidnaps at the end is seriously wigged out by the experience, and could perhaps become the next ice cream man. It’s definitely set up for that. I would probably take it into a more psychological vein next time, really get into the mind of a disturbed kid. That would be something really unique.”**

One of the most interesting aspects of the Ice Cream Man 2 Kickstarter is the mention of it being a straight up horror film. I remember reading in Fangoria that you re-wrote the original Ice Cream Man script, to make it more kid friendly. So what’s the reasoning behind going more hardcore for the sequel?

I think making it more kid-friendly was the kiss of death. I made a horror picture for pre-teens, but whose mother would let them go see it? Besides how fun is it going to be seeing Clint Howard in a straight up horror film!

I’m assuming that the plan is for you to return to the director’s chair? It’s been quite some time since you’ve directed a film, yes?

It will not be me in the director’s chair. Both Clint and I have our eye on a talented young director who’s perfect for this film.

The story of Ice Cream Man 2 is going to center on Gregory Tudor’s revenge on the kids from the first film. Do you plan on bringing all the original actors back to reprise their roles, or will new actors be filling their Converse shoes?

Of the kids, Anndi McAfee and Justin Isfeld are still acting according to IMDb, but not Mikey LeBeau or Jojo Adams. We’ll certainly look at that during casting. It’ll be fun to bring some of the actors back. Certainly some of the cameos would be fun; Steve Garvey, Olivia Hussey, David Warner. And I promised my ex-wife I’d have a role for her as well.

Can you tell us anything more about the plot of the sequel, aside from what’s listed on Kickstarter?

Well, Gregory Tudor died in the first, so you’d think bringing him back would be a bit of a challenge, but it actually worked to our advantage in the script. Small Paul, who’s been in and out of institutions throughout his youth due to the trauma of his kidnapping and killing of Tudor some twenty years earlier, has fallen into possession of the Ice Cream Truck. I’ll stop there, but you can be sure Clint’s return is something to behold.

Practical or CGI? And Will Mark Garbarino be coming back to do the effects?

Mark Garbarino is like a brother, couldn’t make it without him. Mostly practical but we have access to a full post-production studio including CGI for a nominal fee so you’ll probably see both.

Ice Cream Man was made for just under $2 million, as I understand. The Ice Cream Man 2 Kickstarter has a goal of $300,000. Does that reflect the entire budget, or is some money already allotted for the film?

The 2 million dollar figure isn’t really accurate – a bit of PR and a bit of accounting from my partner at the time who included a lot of distribution costs that weren’t part of the production. The actual cost to put it in the can was about 700K, and at least 200K of that was in overruns due to a first time director and first time producer. As I said earlier the post production will be almost gratis so that helps and Clint and I are both calling in favors. It’s tight at $300K but doable.

Suppose the Ice Cream Man 2 Kickstarter campaign fails to reach its goal. What then? Does the project die? Or is there a Plan B?

At this point there is no Plan B – we wanted to gauge the interest out there. If we don’t make our goal but get a significant amount of backers, there could be some production companies interested.

Looking back on Ice Cream Man, two decades later, how do you feel about the film? Is there anything you would change, if given the chance?

Wow, that’s a tough one. I love watching people laugh and it brings much more laughter today than fright. It was made to be campy but it didn’t have enough fright.

The fate of Gregory Tudor is quite literally in your hands. If you want to see Ice Cream Man 2 happen, head over to the Kickstarter campaign and pitch in. As Apstein said, even if the goal amount isn’t reached, a high number of backers could give the film a second chance at life, so don’t fail to donate simply because it looks like all the money isn’t going to be raised.

Perks for pitching in include finished copies of the film, posters and autographs from Clint Howard, with larger donations nabbing you things like production credits, roles in the film and even ownership of the actual ice cream truck that will be used in the movie!

Many thanks to Norman Apstein for taking the time to answer our questions. Best of luck with the film, sir!