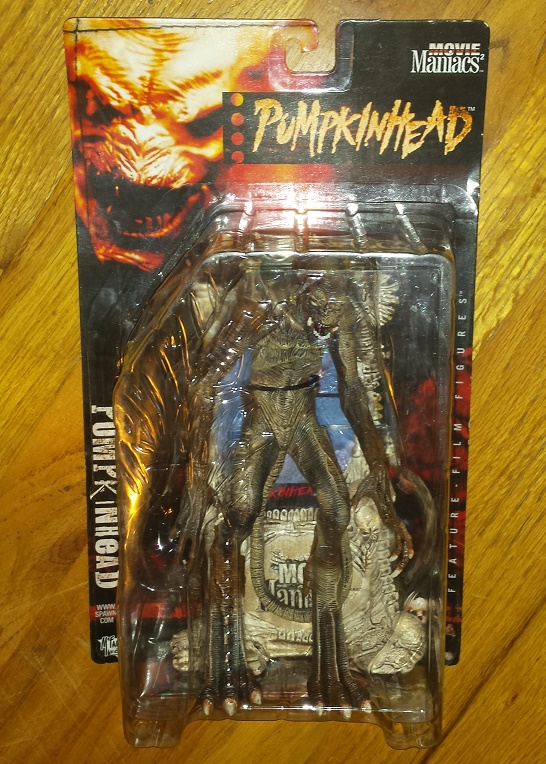 This past weekend marked the official start of summer, which means that yard sale season is now in full swing. The first weekend of summer is always a good time to head out there and check out your local yard sales, and though that was my plan, I woke up on Saturday morning feeling pretty damn crappy. But that’s okay, because the Yard Sale Gods brought the treasure directly to me.

Not long after waking up, my dad stopped by bearing a gift, which he informed me that my mom had purchased from a neighbor’s yard sale. Holding it behind his back, I was pretty sure it was some dirty trinket that I would have to pretend to be amused by, but my jaw nearly hit the floor when he revealed something that instantly made me realize I had underestimated my mom’s treasure hunting prowess.

Sitting before me on my kitchen table was a Movie Maniacs Pumpkinhead toy, still sealed in the package and so pristine that I felt as if I had been transported back to the late 1990s. “Mom thought it looked cool and figured you might get a kick out of it,” my dad noted. “Oh and she said that there were also a bunch more of them for sale, including Norman Bates and some others.”

Now before we go any further, a little history lesson. It was Spawn creator Todd McFarlane who launched the Movie Maniacs line back in 1998, and the seventh and final series was released in 2005. Before companies like NECA and Mezco came along and spoiled us all, the Movie Maniacs line gave us our first action figures of many horror icons, and it’s one of the coolest toy lines of all time.

Despite the fact that I had a pounding headache and a pain in my side that suggested a supernatural being had repeatedly stabbed me with a machete while I slept, I quickly got dressed and headed off to this yard sale, which promised a mother lode of Movie Maniacs toys. And I wasn’t disappointed when I got there, as Pumpkinhead did indeed bring some friends along with him. 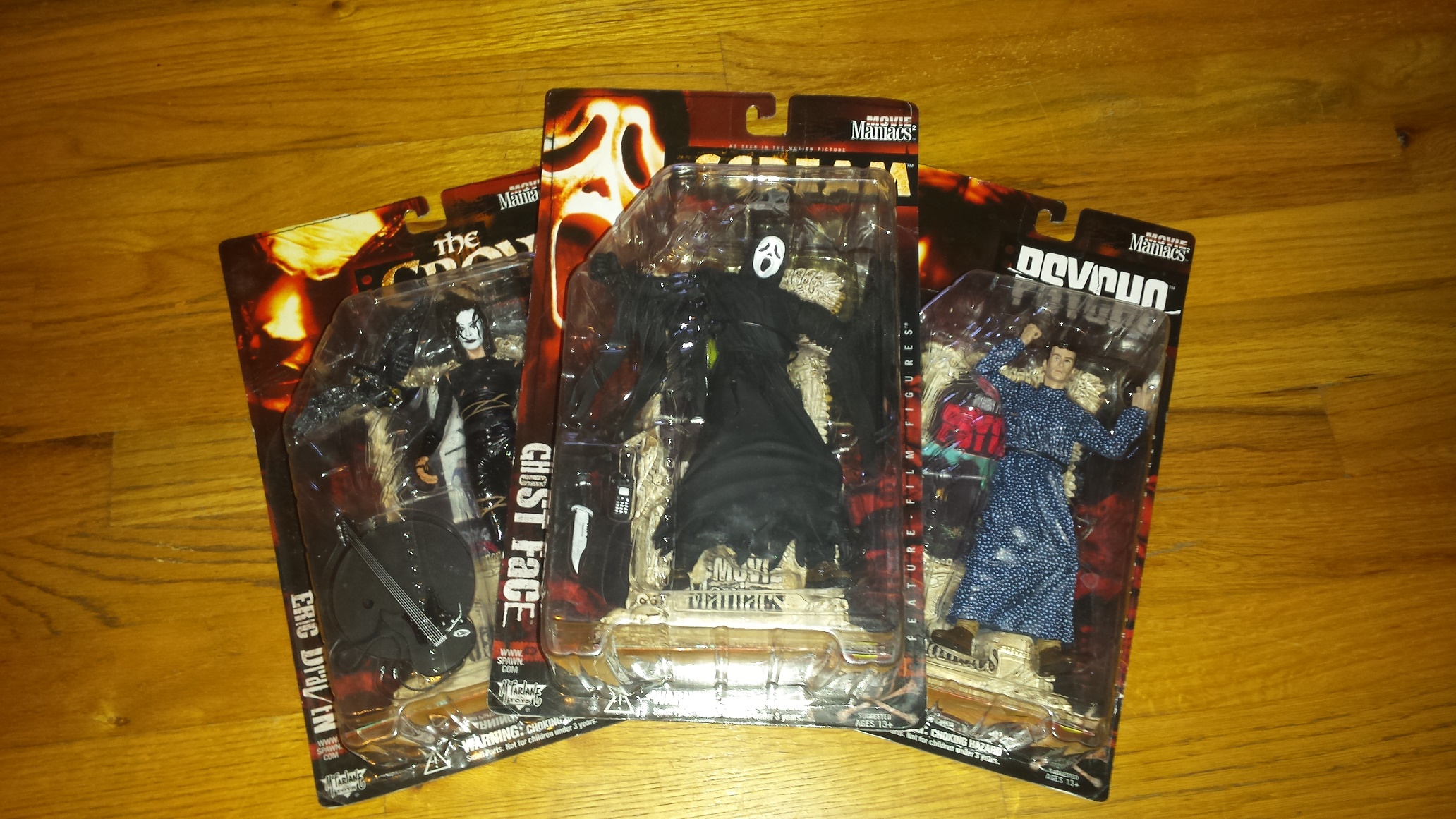 Sitting on a table next to various items that you’d never expect horror toys to be sitting next to were Movie Maniacs figures of Norman Bates, Scream‘s Ghostface and The Crow‘s Eric Draven, and they were all as mint-on-card as Pumpkinhead. Whenever I find Movie Maniacs out in the wild, which is quite rare, they tend to be sun-faded and damaged, but it was as if these had remained case-sealed for nearly 20 years.

All four characters are from Series 2 of the Movie Maniacs line, and my mom’s neighbor was charging $10 apiece for them – a high price by yard sale standards, but a damn good deal in comparison to eBay prices. She told me that her mom, who had recently passed away, used to own a video rental shop, which effectively answered the many questions I had rattling around in my brain at that moment.

Oddly enough, I can vividly remember going to one of her mom’s yard sales years ago, which wasn’t so much a yard sale as it was a backyard video shop. She was selling boxes upon boxes of horror tapes that year – many of which were rare and valuable – and it’s to date the hands down best yard sale I’ve ever been to. Unfortunately, it’s likely that all remaining tapes were trashed when her mom died, and the house was sold.

But for whatever reason, these four Movie Maniacs toys ended up in the possession of the woman’s daughter, who just so happens to live next door to my parents. Much like this year’s Texas Chainsaw Massacre-related find led me to believe, it seems it was my fate to inherit the toys, and there’s something about knowing that they used to be on sale in a video store that makes them that much cooler.

While it should’ve been $40 to nab all four toys, I ended up paying only $20, and even that was more than the lady wanted to take for them. Since she could tell I genuinely wanted the toys, she insisted that I just take all of them off her hands for free, and though I must admit to entertaining the thought, I just didn’t feel right about it. Besides, this lot is an absolute steal at $20. 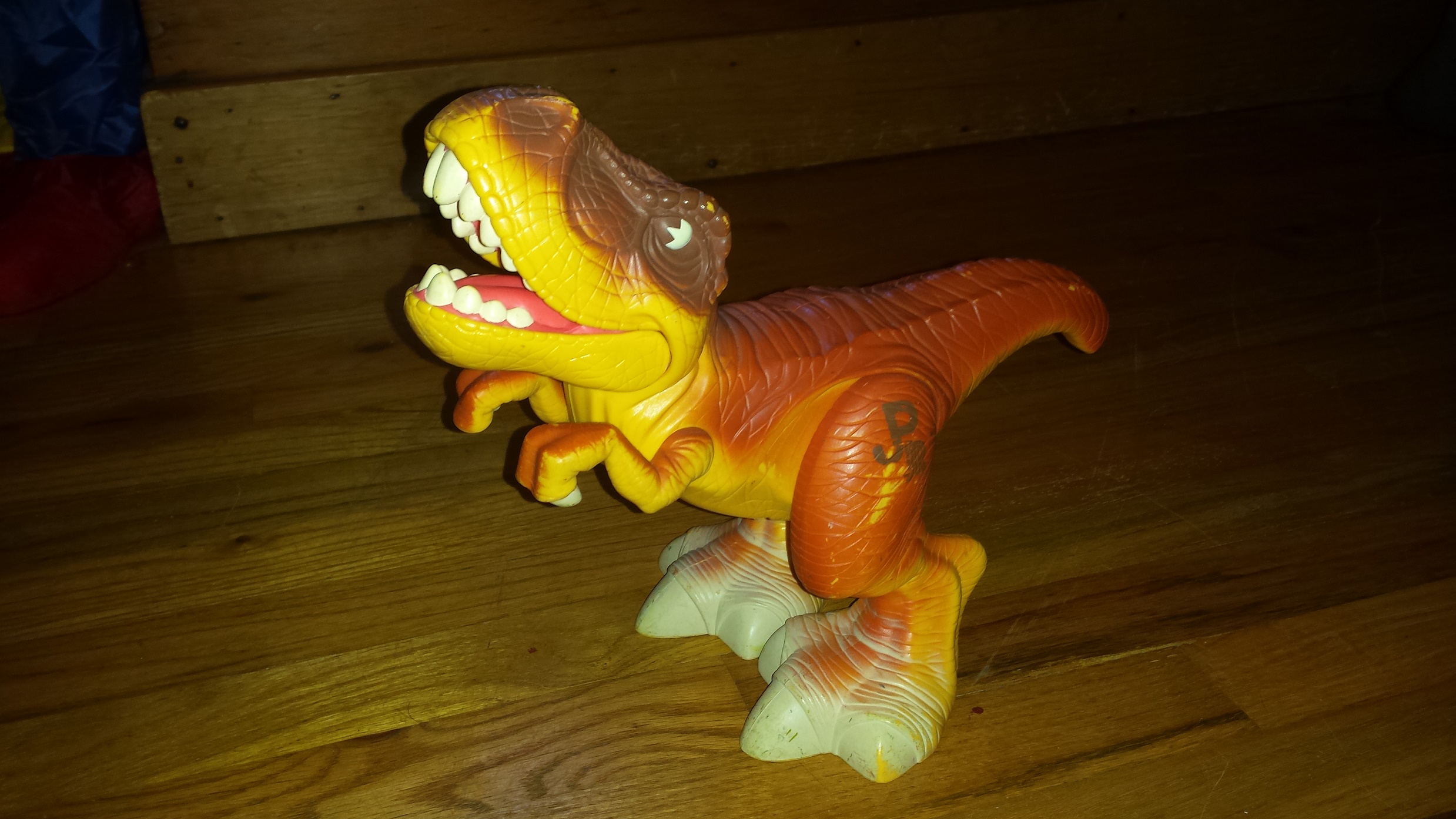 The only other thing of interest at the yard sale was a T-Rex toy from the Jurassic Park Junior line that Playskool put out back in 2001, which was lumped into the $20 price. This little guy makes a roaring noise when you push down his tiny arms and he’s colored like a piece of candy corn, so he was impossible to resist. Besides, I’m all about dinosaurs right now, in the wake of Jurassic World‘s sheer awesomeness.

Needless to say, yard sales have been pretty damn good to me this year. How about you? Have you found anything cool? Comment below and tell me about it!