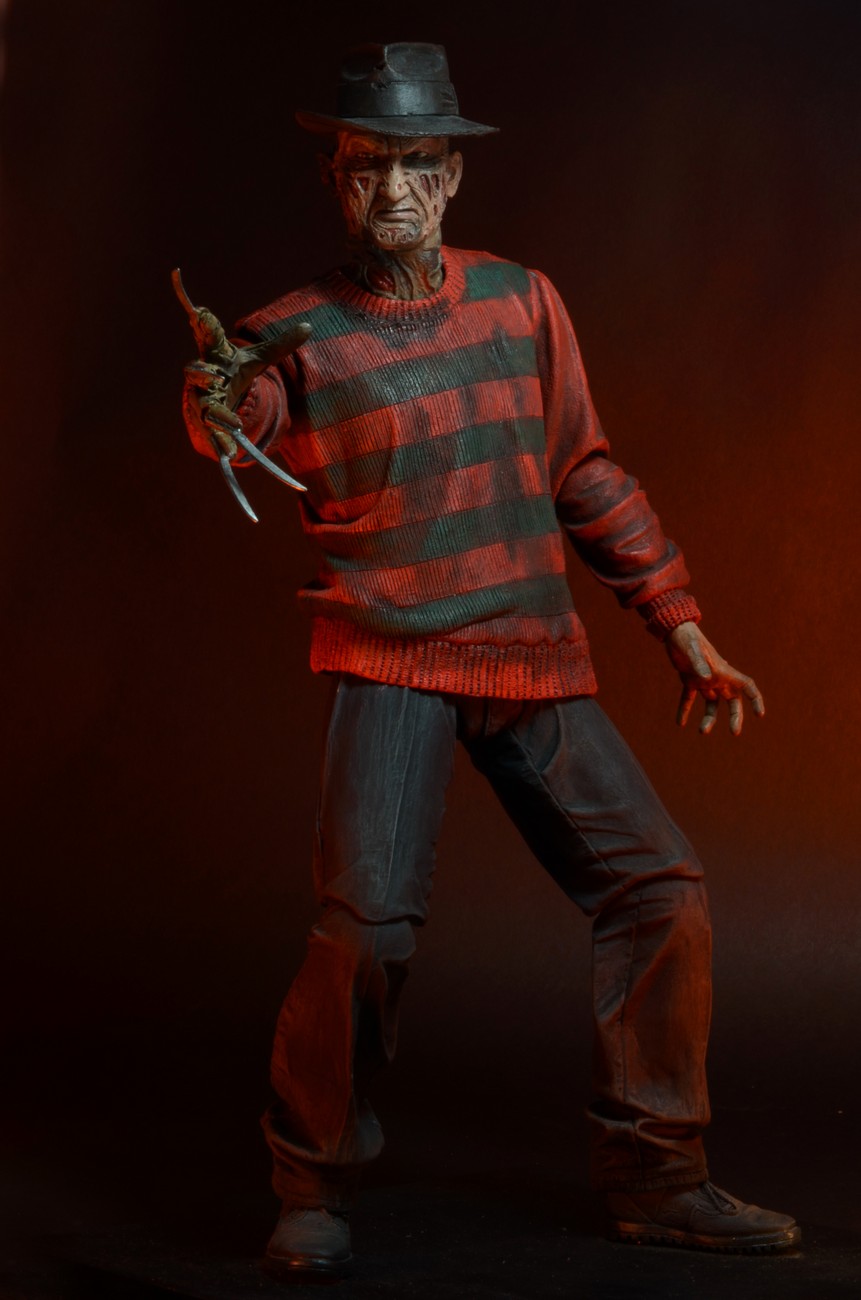 Way back in 1979, Kenner was famously forced to pull an Alien toy from shelves, amidst parental complaints that suggested the toy was much too horrifying for its intended audience.

We’ve come a long way as a society since then, and a quick trip into your local Toys R Us serves as the perfect example of that. Though the shelves were once only lined with toys for kids, the company has come to embrace the fact that there’s another side of the coin: adult collectors.

As one of those adult collectors, and of course as a horror fan, my love for Toys R Us has been reignited in recent years, as the shelves have become stocked with awesome action figures from toy companies like NECA and McFarlane.

My delight was palpable when I realized Toys R Us had broken the proverbial glass ceiling and started selling ‘collectibles’ right alongside ‘toys,’ and it’s not uncommon these days to see Predators and Aliens hanging from the store’s pegboards, alongside Freddy Krueger and Jason Voorhees.

It’s truly a beautiful thing. But have we really evolved as a society, as it seems? Or has Toys R Us’ recent foray into more adult-oriented collectibles simply slipped under the radar?

Unfortunately, I can’t help but answer ‘yes’ to the latter question, in the wake of Toys R Us recently responding to parental outrage by pulling NECA’s Breaking Bad action figures from all of their stores. It’s 1979 all over again, and what it means for the future of the store is troubling.

As I’m sure you’ve heard by now, Florida mom Susan Myers raised quite a stink earlier this week when she discovered Walter White and Jesse Pinkman action figures in her local Toys R Us, of course based on AMC’s hit series Breaking Bad. One of the accessories the figures include is a bag of meth, which is what sent Myers off the deep end.

And she’s not the only one. After starting a petition to demand that Toys R US IMMEDIATELY pull all Breaking Bad toys, 9,300 other uptight citizens joined the cause, and the campaign garnered worldwide recognition. It was only a matter of time before Toys R Us gave in, announcing this morning that they’re IMMEDIATELY following Florida mom’s orders.

Because, ya know. She’s the boss.

I’d say that I’m surprised by Myers’ reaction to the toys, or by Toys R Us’ reaction to her reaction, but honestly I’m not. We currently find ourselves in a generation that thrives on faux outrage, which quite frankly threatens to destroy all of our freedoms.

Not a single day passes where somebody doesn’t act all pissed off about something or other, whether it’s a commercial on TV or a tweet from a comedian, and it’s become the societal norm for apologies to be issued and for major companies to bow down to irate consumers.

Gilbert Gottfried lost his job because of a tweet. A white cosplayer was recently deemed ‘racist’ for painting her face brown, when she dressed up as The Walking Dead‘s Michonne. Rob Zombie was attacked for featuring a John Wayne Gacy-themed room in his haunted attraction.

Generation Outrage. That’s what we are. We’re pissed off about EVERYTHING, and we’re not going to take it anymore. We’ve discovered a way to become someone, and to have our voice be heard by the masses, and we just love to make ourselves look good by trashing the behavior and actions of others.

Why? Because it’s easy. It’s much easier to make yourself look like a good person by attacking someone for something controversial than it is to genuinely be a good person. And that’s why all of these attacks are made in public, for all to see, rather than behind closed doors.

Since the internet has given all of us a voice, many of us use it to force our own opinions and beliefs on society as a whole, and that’s precisely what Susan Myers has done this week. By giving in to her faux outrage over harmless action figures – if your young kids know what meth is, it’s not NECA’s fault… – Toys R Us is voting a resounding YES to this sort of cancerous behavior.

It doesn’t take a rocket scientist to figure out that Walter White and Jesse Pinkman aren’t the only pop culture characters that are going to be getting the axe, as folks like Jason and Freddy are quite frankly a whole lot more horrifying than a couple of drug dealers. In fact, Freddy molested kids, didn’t he? EEK.

If Toys R Us was so receptive to pulling their Breaking Bad stock, I can’t imagine that our favorite horror icons will be sticking around for much longer. Hell, pull the wrestling figures too. Those guys beat each other up, and we don’t want kids getting the idea that bullying is okay. Right?

I don’t know about you, but I’m deeply troubled by the fact that our society has become designed in such a way that the voice of one irrational personal can affect us all. The internet allows for silly beliefs to spread like wildfire, and in situations like this, companies like Toys R Us are left with no choice but to give in.

What we have here is a PR move, more than anything else, and avoiding bad PR unfortunately means appeasing whackos like Susan Myers. Because the last thing Toys R Us wants to become known as is the toy company that sells toys that have been demonized by the iron fist of Generation Outrage. Don’t blame them. Blame our society.

I fear, my friends, that the days of horror icons lining our toy shelves are numbered. I’d be shocked if Toys R Us doesn’t get cold feet about future orders from NECA, and since they’re the leading supplier of the horror toys you find in there, that means the store once again becomes Toys R Kids, rather than Toys R US.

As for us adult collectors, well, we’re just going to have to look elsewhere for the Satan-appeasing, world-destroying, innocence-shattering toys that we like to collect. Because Susan Myers doesn’t like them. So we can’t have them.

Since it was a petition that resulted in Toys R Us pulling the Breaking Bad toys, I’ve decided to start a counter-petition in an effort to prevent other toys from getting the axe. So click here to sign the petition and let Toys R Us know that you were a Toys R Us kid, and you wish to remain one as an adult.

Spread it around, if you feel the way I do about this issue.