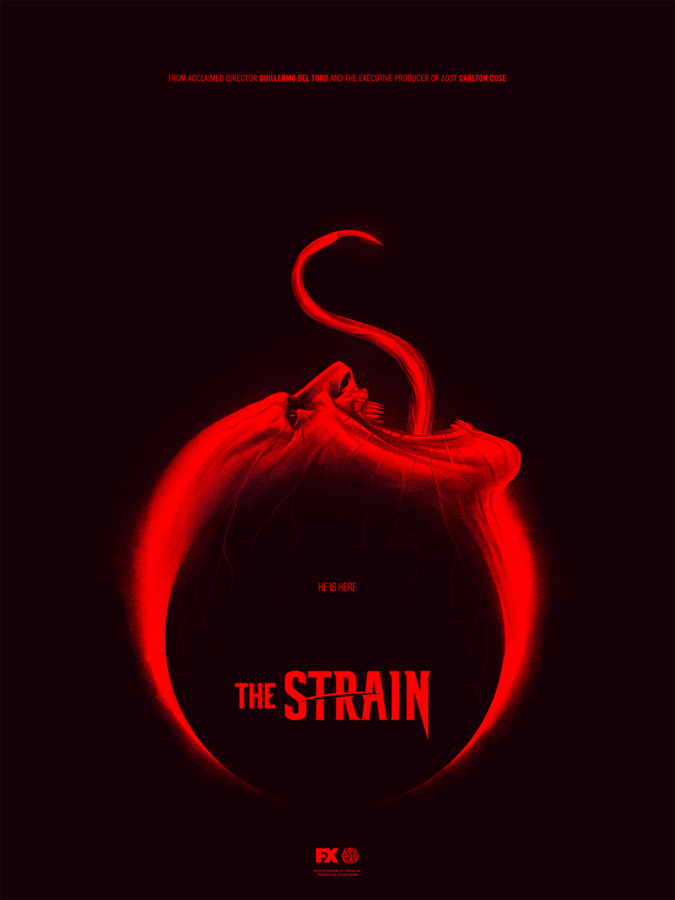 July 13th marked the series premiere of the Guillermo del Toro-produced FX series The Strain, based on a trio of novels he recently penned with Chuck Hogan.

Co-written and directed by Del Toro himself, the pilot episode effectively introduced the world of the series and the characters who will inhabit it, leaving me thirsty for more.

Episode 1 left us off on a chilling cliffhanger of a note, with a thought-to-be-dead young girl from the airplane massacre walking out of the morgue and returning home, hinting that Episode 2 was going to be chock full of monster action.

And if this was a movie we were talking about, we indeed would’ve seen a whole lot of that action this past Sunday night. But we must remember that it’s a television series, and with 11 episodes still to come, loads cannot be blown just yet.

Like the pilot, ‘The Box’ was fairly slow-paced and character driven, further establishing the world and developing the characters that we were introduced to a couple weeks back. That’s not to say there weren’t a few juicy moments of bloodshed, but those looking for all-out monster fun are just going to have to be patient.

The main character of the show is of course CDC doctor Ephraim Goodweather, who we learned a bit more about this past Sunday night. As he struggled to figure out what the hell happened on that airplane, Goodweather also paid his son a visit and even attended an AA meeting, revealing that he’s not just an absent father but also a recovering alcoholic.

But of course he is!

I think it goes without saying that character development is always a good thing, but most of Goodweather’s scenes felt like they belonged in the pilot, rather than Episode 2. I say this because it required a hefty amount of suspension of disbelief to buy into the fact that he was able to take so much time away from such an important case, with the AA scene in particular feeling very much like it was meant for the pilot, but shoe-horned into this episode.

I guess what I’m saying is that I’m not all that interested in what’s going on in Goodweather’s personal life, but again, you can’t really fault a show for spending time developing its main character. His story is just far too generic and lacks that compelling factor, which I suppose is the problem.

Aside from family and personal issues, Goodweather struggled throughout the episode to keep the survivors of the airline disaster quarantined, in the face of government officials insisting it was merely the result of a carbon monoxide leak. Refusing to back down, Goodweather was taken off the case (but of course he was!), forcing him to go rogue.

Most of the horror-heavy bits of the episode centered on those survivors, who were freed from quarantine, against Goodweather’s pleas; the goth rocker with the wig, the female lawyer, the pilot and the guy with glasses.

While lawyer lady’s eyes turned red and blood began to seep out of her mouth, goth rocker developed a taste for the red stuff, biting a groupie’s neck and licking her blood up off the floor in the episode’s most bloody moment. As for the pilot, he’s in perhaps the worst condition, laid up in a hospital bed with those blood-sucking vampire worms coursing through his face.

As it turns out, the four survivors were left behind as a means of carrying out the master plan of infecting the entirety of New York City – and, presumably, the world at large – though I’m still unsure as to what the difference is between them and those who were ‘killed,’ who seem to be doing the same thing – albeit a bit more aggressively. Something that will be explored in future episodes, I presume.

The biggest reveals of the episode gave us some insight into the characters of Thomas Eichorst and Eldritch Palmer, who were total mysteries in the pilot. As we learned, Eichorst is a Nazi vampire who was responsible for imprisoning Jewish badass Abraham Setrakian many years ago, which was revealed in a scene where he paid him a jail visit – the episode’s most chilling and well-acted scene. Eichorst, who hasn’t aged a day since they last met, refers to Setrakian by his Holocaust number, and promises him that he’ll have a front row seat to the end of the world.

As for Palmer, his health is declining and he’s involved with Eichorst because he wants to be turned into the immortal being he is, which is something only The Master can provide him. Toward the end of the episode, Palmer visited The Master – now freed from the airport, thanks to thug dude who loves his mommy – in a scene that gave us our best look at him yet, pulling back the hood to reveal a deliciously Del Toro creature underneath. We only saw the back of his head, but it will have to do for now.

The episode ended with a continuation of the pilot’s cliffhanger, with creepy undead young girl unleashing her massive tongue on her unsuspecting dad in the bathtub, almost instantly killing him. It was a pretty damn awesome scene, and I can’t wait to see more scenes like it in the future. Hooray for long-tongued vampire kids.

The other noteworthy aspect of the show’s second episode was the introduction of new character Vasiliy Fet, played by Kevin Durand. Fet is a badass pest exterminator who finds a rat at a fancy restaurant and shuts it down in totally badass fashion, hinting that he’ll have much bigger fish to fry as the weeks progress. And when I say fish, I of course mean infected Nazi vampire mice.

For those looking for the kind of campy straight up horror that the pilot episode seemed to promise, ‘The Box’ was likely a disappointing hour of fairly dull and boring television, which is an opinion I can’t entirely disagree with. But the way I see it, it was all about setting the stage for that campy and fun horror to come, and I’m a fairly patient man, so I don’t mind waiting.

We must remind ourselves that this was only the second episode of a full 13-episode series, and so it’s to be expected that the action isn’t coming our way hot and heavy, right out of the gate.

Be patient, my friends. Be patient.