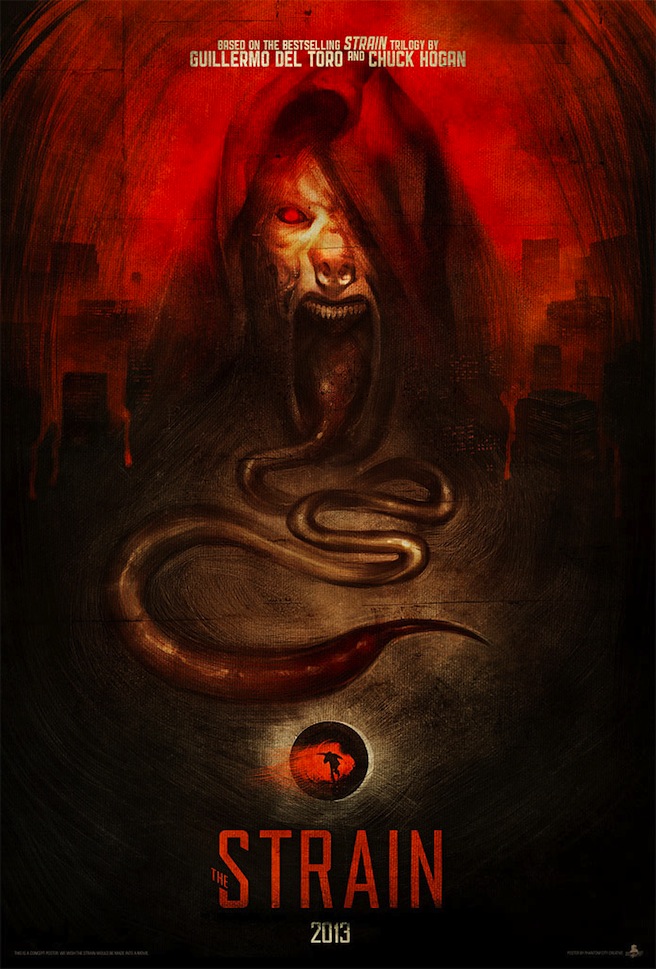 Right about now, us horror fans are in the midst of an absolute golden age of television, with the quality of shows on networks like AMC, HBO, A&E, FX and even NBC far surpassing most of the genre films that have been released into theaters in the past few years.

The Walking Dead, Hannibal and Bates Motel are just a few examples of the recent crop of exceptional horror-themed television shows, with From Dusk Till Dawn, True Blood, American Horror Story and Hemlock Grove also serving to make it a damn fine time to be a horror fan with a TV.

The latest of these ‘Viewer Discretion Advised’ programs is FX’s original series The Strain, which just premiered last night. Based on the same-named trilogy of vampire novels written by Guillermo del Toro and Chuck Hogan, The Strain centers on an infectious outbreak in New York City, which turns normal citizens into murderous monsters.

Despite owning the first Strain novel – which I purchased a few years ago at a Fangoria convention, and got signed by Del Toro – I’ve never actually read a single page of it, or the two follow-ups. Truth be told, I’m not nearly as much of a reader as I am a TV/movie watcher, but I’m actually kind of glad I never read the books, because it’s a lot more fun to jump into a show like this without really knowing what to expect.

Or perhaps that’s just me justifying my embarrassingly short attention span, which makes it almost impossible for me to finish books. But I digress.

Though I probably won’t be doing weekly recaps of The Strain here on HL – at least, I don’t plan on it – I just watched the premiere episode and I wanted to write up some thoughts on it, so here goes that.

Co-written and directed by Guillermo del Toro himself, the pilot episode of The Strain – titled ‘Night Zero’ – was primarily devoted to setting the stage, creating the show’s world and introducing us to the characters that inhabit it, as pilot episodes tend to do.

The episode kicked off with the reveal that some sort of giant monster was on board a plane bound for New York, leaving all but four of the over 200 passengers dead, prior to landing. With no visible wounds, the passengers seem to have just dropped dead at a moment’s notice, and the survivors don’t have much memory of what happened.

The mystery deepens when a giant coffin is discovered in the cargo hold, filled with dirt. It’s up to a CDC team led by Dr. Ephraim Goodweather to figure out what the hell is going on, and it soon becomes clear that both the survivors and the deceased passengers are infected with a deadly virus that threatens to take over the entire world.

Oh yea, and that giant monster is loose.

Goodweather, played by Corey Stoll, is an instantly likable main character, even if his story is about as generic as it gets. Extremely dedicated to his work, Goodweather has neglected his wife and small child, as he’s the kind of husband/father who’s either never there or is fielding important phone calls when he is.

Sure, he’s a character we’ve seen a thousand times before in a thousand other movies and TV shows, but Goodweather is nevertheless a guy we should have no problem rooting for as he finds himself deeper and deeper in some pretty deep ass shit.

Another instantly compelling character the pilot introduced us to was Holocaust survivor Abraham Setrakian (played by David Bradley), who was immediately portrayed as one badass dude. Setrakian is a pawn shop owner who’s dealt with the show’s main monster in the past, allowing for him to be the token character that knows a whole lot more than everyone else does.

Again, kind of a generic character, on paper at least, but Sertrakian is so totally awesome that it’s hard not to instantly fall in love with him. Out of everyone on the show thus far, he feels most like a Del Toro character, and I expect many badass moments from him throughout the season.

And then you’ve got Sean Astin as Jim Kent, a member of Goodweather’s CDC team, Richard Sammel as Thomas Eichorst, a mysterious man who’s behind the quickly spreading epidemic as well as Jonathan Hyde as Eldritch Palmer, who is on some level in bed with Eichorst.

I always love shows that have a strong focus on characters and The Strain looks to be one of those shows, with most of the pilot’s runtime devoted to establishing them and their various motives. Again, they’re all pretty compelling, serving to make The Strain’s world an interesting and engaging one.

Also bringing that world to compelling life is the show’s visual style, which was quite beautiful throughout the pilot. You wouldn’t expect any less from any project with Del Toro’s name attached to it, and The Strain very much feels like a Del Toro film, in the visual sense. I can only hope that continues as other directors take over, in subsequent episodes.

Despite the inherent character and world-developing nature of pilots, The Strain also manages to infuse a fair amount of bloody carnage into the inaugural proceedings, with two scenes in particular that are quite gory. Wishmaster star Andrew Divoff is sucked dry and totally pulverized in the first of such moments and the second feels like a scene ripped straight out of Re-Animator, with corpses rising from their slumber and feasting on the man who had been autopsying them.

Both scenes hinted at the sheer monster mayhem that’s surely to come in future episodes, effectively whetting my appetite for all that gory destruction. If the pilot was any indication, this is going to be one hell of a bloody show, and I’m thinking the body count is going to be quite impressive, once the season comes to a close.

Always hard to judge a show based on only a single episode but The Strain looks primed and ready to deliver an interesting spin on vampire mythology, with gruesome monster effects, engaging characters and a notable visual style working together to ensure that it will be yet another TV series that all horror fans should be tuning in to watch.

At the moment, I see no reason why The Strain won’t turn out to be further confirmation of the fact that TV is currently one hell of a home for kickass horror. So bring on the skin-crawling worms, the big ass tongues and all the monster action you can, Del Toro and company, because my interest has been piqued and I’m all in and ready for more!