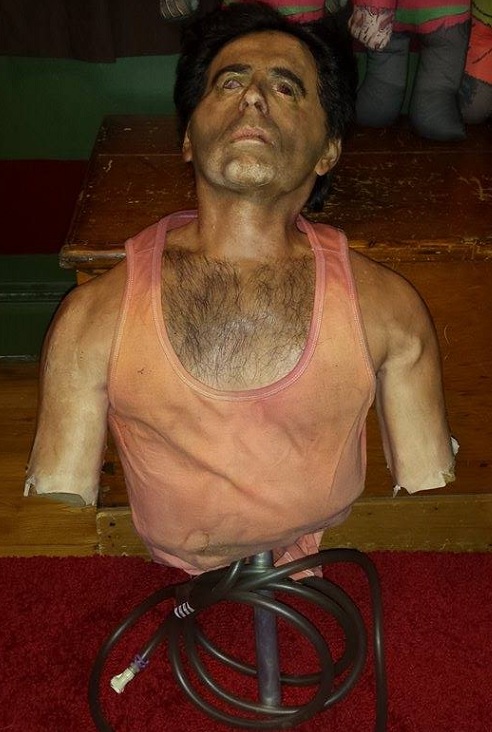 It’s a small world, as that painfully irritating jingle at Disney hammered into my head at a young age. And it has never felt smaller to me than it did this past weekend.

Back in 2012, when I was still running my own blog Freddy In Space, I wrote up a post about a handful of screen-used horror movie props that were, at the time, being sold by movie collectibles shop The Prop Store. One of those props was Eli Roth’s upper torso from Piranha 3D, selling for $1,995.

Roth had a brief cameo in the 2010 remake as the judge of a wet t-shirt contest, and he met his end when he was crushed between two boats – his entire head exploding into a glorious mess that seemed quite fitting for the director of gory gems like Cabin Fever and Hostel.

Being a huge fan of both Piranha 3D and Eli Roth, my whistle was more than wet by the prop, though the $2,000 price tag instantly dashed my dreams of owning Roth’s corpse. So instead of buying it, I simply wrote about it, as I often do when I can’t actually afford things.

This past weekend, a friend of mine dropped a link to an eBay auction in my Facebook message inbox. Yes, it was indeed an auction for Eli Roth’s corpse, and though the auction listed that no certificate of authenticity was available, it was unmistakably the very same prop sold by The Prop Store, back in 2012.

Though the original selling price was cut in half, with the seller looking to get $1,000 for the lifelike Eli Roth puppet, there was also a ‘Make an Offer’ button attached to the auction, and you better believe I was about to make as low-ball of an offer as I could possibly muster the balls to send over.

Now here’s where things get really interesting. Like, interesting to the point that I’m pretty sure owning Eli Roth’s corpse was my predetermined destiny in life – hopefully not my only destiny, but one of my destinies, at least.

Just as I was about to make an offer, I made something else: a shocking realization, which took this story in an unexpected direction. The seller, according to the listing, lived in a town a mere hour away from my own. Yes, of all the places in the entire world the owner of this prop could’ve lived – a prop that I’ve wanted for years – she lived a stone’s throw away from MY GODDAMN HOUSE.

The most exciting part of the realization is that I knew it gave me an upper-hand over all potential bidders. With the ability to pick up the prop, thereby saving the seller the extraordinary pain in the ass of shipping a life-size human torso, coupled with the fact that I could pay cold hard cash, I knew that no offer was too low for her to just say, ‘fuck it, come take this thing off my hands.’

And so I made an offer of $500, half of what she was asking for and 1/4 of what The Prop Store originally nabbed for it. Though she haggled me up to $520, she accepted the offer, and we set a date for me to come pick up Eli Roth’s hairy-chested corpse this past Sunday afternoon.

I keep referring to the seller as ‘she,’ though I truthfully had no idea I was talking to a female until I arrived at her house – in fact, I repeatedly called her ‘man,’ in our text message exchanges. Here I was expecting some scary-looking dude to hand me Roth’s corpse, and out comes a mild-mannered mother who insisted she wanted to get rid of the thing because it creeped her and her kids out.

The woman remained fairly tight-lipped about the specifics of how she obtained the prop, though she did indicate that she won it from a police seizure auction. I’m assuming she’s the type of person who actively seeks out things to sell on eBay, and saw in this prop the chance to make some money. By all accounts, she was not the type of person who knew quite what she was in possession of.

‘It’s a small world’ was ringing in my head when I deduced that the woman likely was able to identify the prop thanks to my aforementioned blog post from 2012 about The Prop Store, as the listing is long gone off the web and I am the only person who has actually written about it. So here I am, handing $520 to a woman who likely based her eBay auction off of a blog post that was written by yours truly – fate? I think maybe. 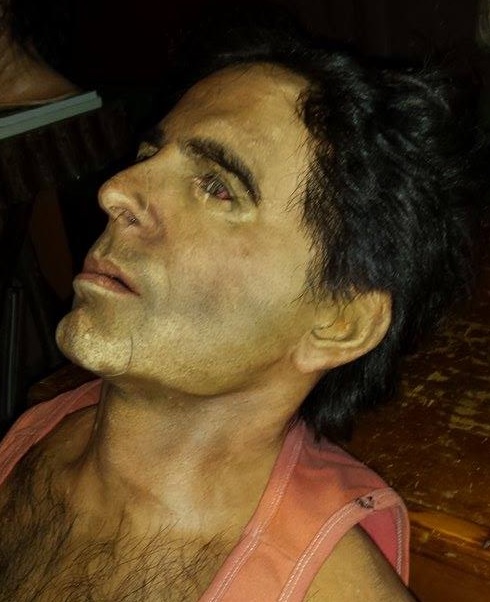 The exchange went off without a hitch, as the woman helped me load the prop – housed inside a giant magician’s chest – into the back of my car. As I drove off with the new centerpiece of my horror collection, I couldn’t help but think of how crazy it was that such a cool piece of horror history ended up on the floor of some woman’s garage – a single hour from the house of the one fan who probably wanted it more than anyone else.

Weighing in at 30 pounds, the eerily lifelike prop is made out of poly foam with a silicon skin cover, and features an 11″ metal rod support structure. Connected to the bottom of the torso is a 15-foot line of tubing that expelled blood from the top of Eli’s head, which has a large cavity underneath the hand-punched hairpiece. This bad boy is incredible detailed, right down to Roth’s trademark chest hair and yea, he totally even has nipples underneath that dirty tank-top.

Looking at the prop straight on, it’s not immediately clear who it’s supposed to be, but it’s quite creepy looking at it from the side, as the face is unmistakably Eli Roth’s. Considering his entire head is demolished in the film, I’m not exactly sure what this particular piece was used for, though I’m assuming it was perhaps one that was made for an additional take but never actually brutalized on-screen.

All I know is, this is as one-of-a-kind as horror movie props get, and I am proud to call myself the owner of it. Even if I never accomplish anything else in my life, I’m the dude who owns Eli Roth’s corpse from Piranha 3D, and I take a whole lot of comfort in that.

Now, where to put this creepy thing…