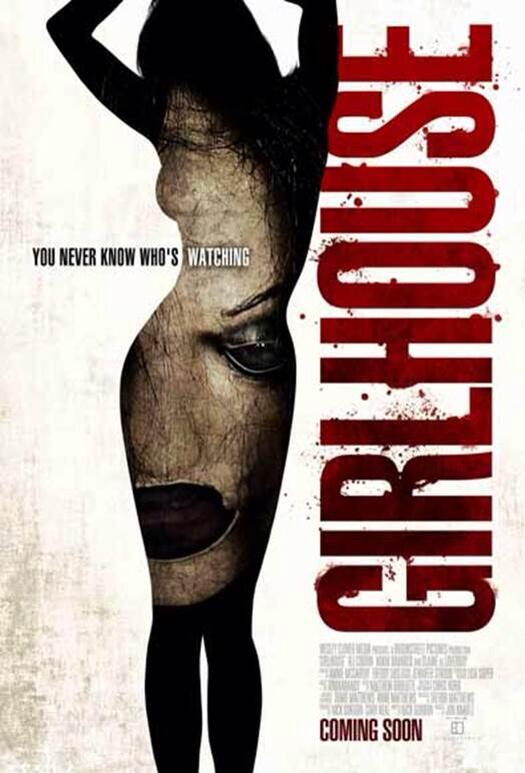 Internet-themed horror has become a bonafide sub-genre in the last few years, with recent films like Open Windows, The Den and the upcoming Unfriended exploring the inherent dangers of the world wide web. It’s a wonderful place, but oh boy is there a dark side.

Not long after meeting her new housemates, Kylie meets Loverboy, a regular customer with full access to the house’s live feeds. Loverboy immediately takes a liking to Kylie and it’s not long before his obsession turns deadly, as he hacks into the site and then comes hacking at the door.

Beginning with a sequence that establishes Loverboy’s past, Girl House is right off the bat an intriguing film. The villain (as a child) is teased by two young girls to the point of him killing one of them, and the well-directed flashback scene – coupled with a quote from Ted Bundy – seems to suggest that the film is going to explore the link between female sexuality and male insanity – now THAT is scary.

There’s a depth to the proceedings in that superior opening sequence, and the central plot of Girl House is one that is ripe for delving into some of those interesting ideas. Unfortunately, the film falls apart almost as soon as the action cuts to the present day, ultimately devolving into little more than another modern day horror film that badly wants to be one of those 80s slasher flicks that we all love so much.

That’s all good and well, because I’m nothing if not an advocate for the slasher sub-genre getting a revival. The problem here is that Girl House commits the cardinal sin of slasher films: it’s not fun. Worse yet, I couldn’t figure out if it was supposed to be. It’s almost as if it doesn’t realize it’s a slasher film until 60 minutes in, and by then the gore and goofy visual gags feel awkward and out of place.

The first hour of Girl House is spent on developing the characters, which is an odd thing to type considering we don’t really get to know any of them. They’re not fun to hang out with and it’s nearly impossible to even care about the protagonist (despite a solid performance by Ali Cobrin), making the ‘getting to know you’ portion of the film both long and boring. Kylie’s love interest is a particular drag, as the relationship is painfully unconvincing.

In Girl House‘s defense, there is some impressive brutality on display once Loverboy starts slashing up the ladies, and the focus is almost entirely on practical effects. It’s hard not to appreciate that fact, even if we never quite see as much as we by all means should. Matthews tends to cut away right when we’re about to see something brutal, robbing us of the full force of those gruesome moments – though gorehounds won’t be totally disappointed.

As for Loverboy himself, who is admittedly a menacing slasher, his uninspired look is a perfect representation of Girl House as a whole. His outfit, comprised of a fleshy mask with makeup on it and a women’s wig, is a clear nod to fellow hulking brute Leatherface, though the character’s look feels less like an homage than it does a reflection of the film’s creative bankruptcy – and a scene where he chases the final girl through the woods does nothing to curb the eye-rolling.

It’s often said that if you’ve seen one slasher film you’ve seen them all, and Girl House does absolutely nothing to dispel that notion. It’s clear that writer Nick Gordon is a fan of movies like House on Sorority Row and Black Christmas, and though the internet-based concept of the film suggests a fresh, modern spin on those slasher classics, there’s truly not a single creative bone in the proverbial body of his script.

While it’s always good to see a brand spankin’ new slasher film, especially one that highlights practical effects over CGI, Girl House is far too familiar and lacks the entertainment factor of the films it will undoubtedly remind you of. It’s a movie torn between taking itself seriously and having some good old fashioned slasher fun, and in the end it’s neither a good horror movie nor an entertaining one.