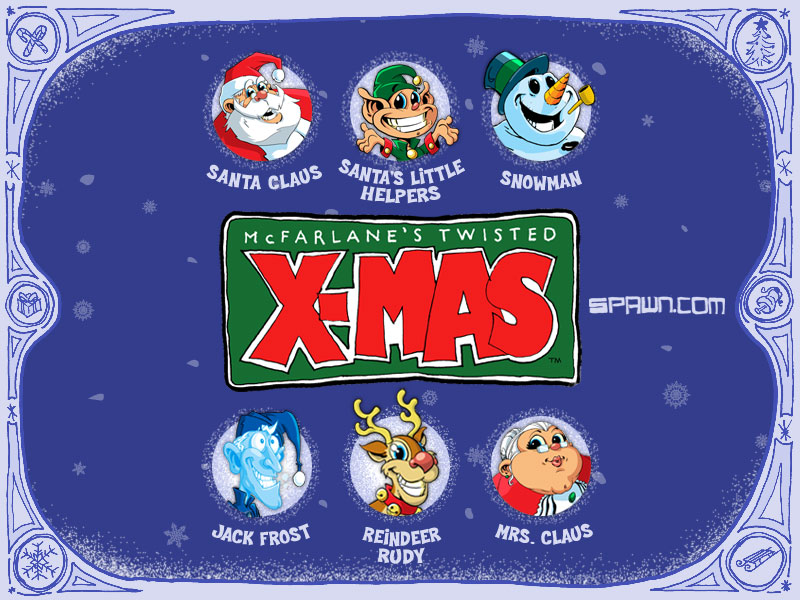 Todd McFarlane’s status as one of the reigning kings of horror collectibles officially began back in 1994, when he launched McFarlane Toys. 20 years later, the company is still one that’s fresh on the minds of horror fans, having just released a new set of Walking Dead toys that give LEGOs an adult-oriented upgrade.

Of course, the creator of Spawn is most known by horror fans for his line of Movie Maniacs, which brought many iconic horror movie characters to our toy shelves for the very first time. The line included Leatherface, Michael Myers and Ghostface, to name just a few, and it paved the way for companies like Mezco and NECA to come along and take over the reins.

One year prior to the first series of Movie Maniacs hitting store shelves, McFarlane tried his hand at putting his own spin on the classic Universal Monsters, launching a line of playsets in 2007 dubbed Todd McFarlane’s Monsters. We already covered those sets here on HL earlier this year, so go back and check that out if you’re interested.

Two series’ comprised the original Monsters line, which was given a complete makeover four years after the release of Series 2. In 2002, the playset approach was completely abandoned, as McFarlane set his sights on larger-scale action figures that were more in line with the Movie Maniacs. Again, the name of the game was reinterpreting iconic monsters, and the first series mostly borrowed from Universal’s films.

By 2003, McFarlane stepped away from traditional monsters and began to put monstrous spins on iconic pop culture characters, Series 2 of the Monsters line being dubbed ‘Twisted Land of Oz.’ For the series, the loveable characters from Wizard of Oz became a bit less family-friendly, Dorothy redesigned as a stripper and the Cowardly Lion ripping out his own intestines.

Each year for the next several, a new series was unleashed, the third based on historical killers (‘Six Faces of Madness’) and the fourth putting horror-inspired spins on the likes of Humpty Dumpty and Little Miss Muffet (‘Twisted Fairy Tales’). In 2007, following the previous year’s release of two three-pack sets (‘Icons of Horror’ & ‘Femme Fatales’), the fifth and final series of McFarlane’s Monsters was released, and boy did the line go out with a bang.

Looking back, it was only logical that McFarlane would find a way to make Christmas scary, as the basic concept of the line (for the most part, at least) was taking beloved things and turning them into evil things. Six figures comprised what was known as the ‘Twisted Christmas’ series, and let’s just say parents were none too happy about Todd’s take on the most joyful time of the year… 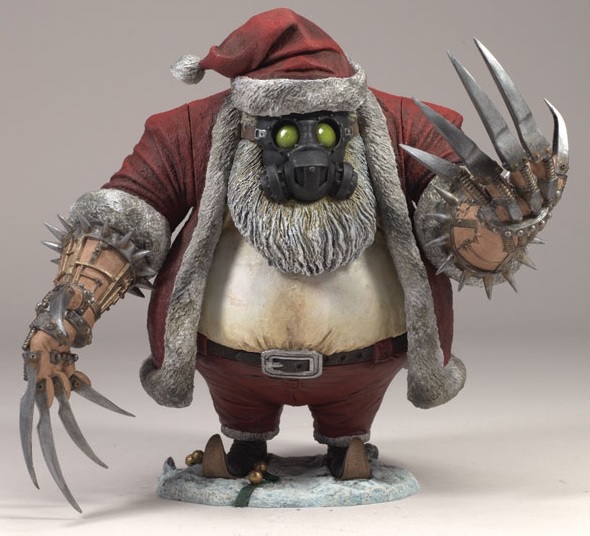 Wearing a dirty suit, a gas mask and rocking a pair of gloves that would make Freddy Krueger pee himself, Santa Claus was of course the ringleader of the series. As if he wasn’t already scary enough, Santa’s hat and mask are removable, revealing a rotten skull underneath. Suddenly, Billy Chapman seems like a goddamn saint, doesn’t he? 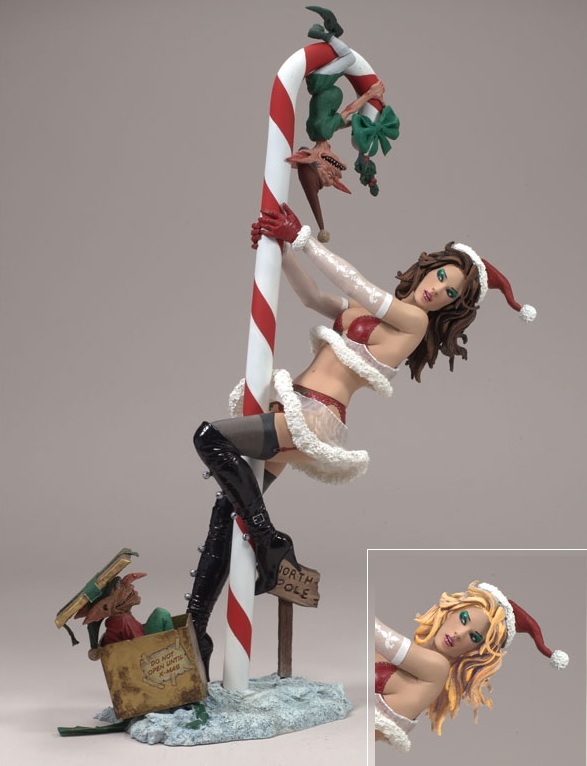 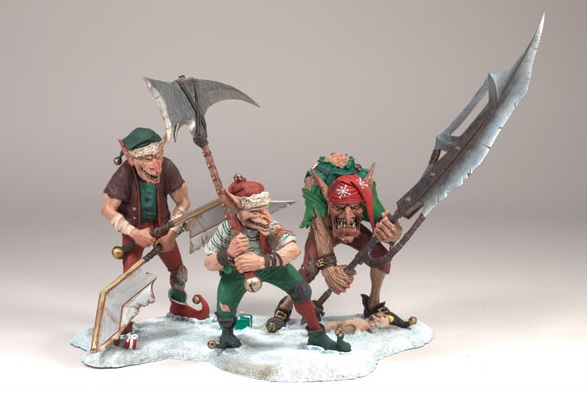 Not content with merely being accessories for Mrs. Claus, Santa’s little helpers received a set of their own, comprised of three of the mischievous little buggers. Wielding weapons of various sizes, the elves stand armed for battle, ready to defend Satan at all costs. I mean. Santa. 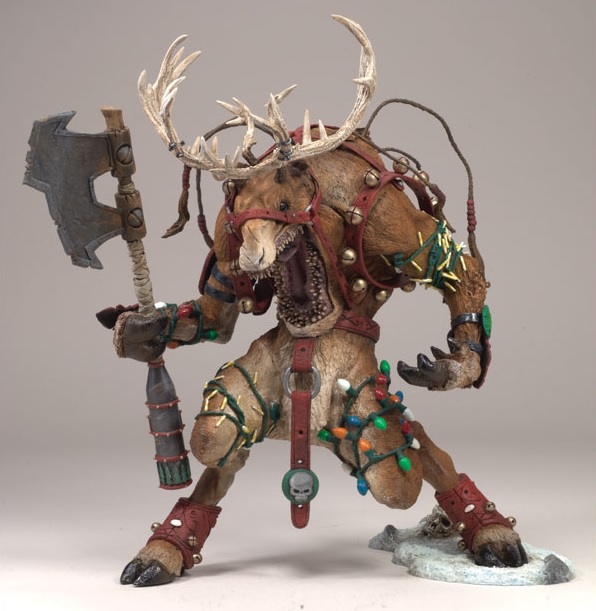 Santa’s right-hand reindeer shed the iconic red nose for his Twisted Christmas figure, dubbed Reindeer Rudy. Wrapped in Christmas lights and carrying a battle axe, this depiction of the lovable animal was pure nightmare fuel, his razor-toothed mouth ensuring that none of the other reindeer will ever again laugh and/or call him names. 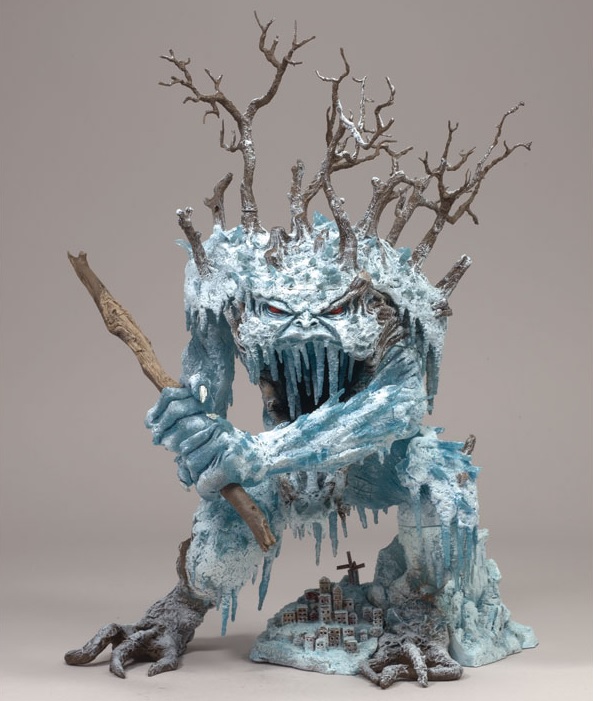 Standing high atop a frozen cityscape, McFarlane’s version of Jack Frost is clearly interested in doing much more than nipping at your nose, to say the very least. Ripping your entire head off and eating it, is more like it. And yet, this Jack Frost is somehow less creepy than the one Michael Keaton played. Go figure. 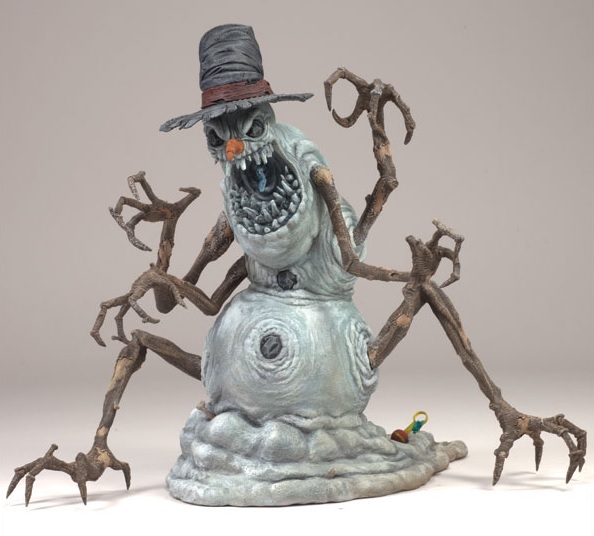 Rounding out the series was a sadistic Snowman, which is perhaps the coolest holiday horror of them all. With spider-like legs, McFarlane’s Snowman looks like something out of John Carpenter’s Holiday Special, the result of ‘The Thing’ trying to blend in with Outpost 31’s winter scenery.

Over on Amazon, you can still purchase all of the Twisted Christmas figures, including the blonde Mrs. Claus variant. They vary in price, ranging from a mere $14.89 to a whopping $68.59.

Fusions of Christmas and horror don’t get much more glorious than these bad boys. So thank you for that, Todd. Now, can we please turn this line into a movie? Pretty please?