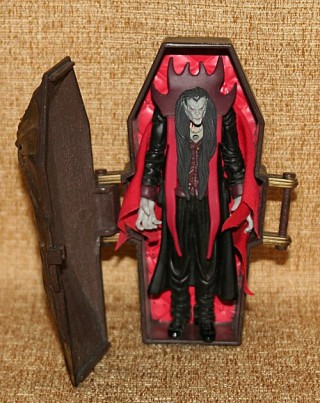 In a press release sent out earlier this week, Spawn creator Todd McFarlane announced that he’s looking to revolutionize the horror action figure game once more with a brand spankin’ new line of building block style toys, kicking off with a handful of Walking Dead-themed releases.

Set to exclusively hit Toys R Us stores this fall, just in time for Walking Dead’s return on AMC, the building blocks are essentially highly-detailed LEGOs for adults, allowing us to quite literally construct iconic moments from the series, to display on our toy shelves.

The Governor’s severed head fish tank room, the prison tower and a scene of Daryl Dixon riding his motorcycle are among the first releases in the Walking Dead ‘Brick Building’ line, with figures of the most popular characters being made available in separate blind bags.

The line represents the latest power move from Todd and his company McFarlane Toys, which is no stranger to doing things that have never quite been done before. In celebration of McFarlane’s next big step, we’re going to be spending some time this summer here on HL looking back on his company’s many contributions in the past, and there’s of course no better place to start than the very beginning…

As with most things in Todd McFarlane’s career, the beginning of his toy company can be traced back to the Spawn comic book series, which he launched in 1992.

Story goes that Spawn became so successful that Mattel was interested in making action figures based on the comic, though meetings with the company left McFarlane underwhelmed. While he envisioned highly detailed action figures that kids and adults alike would gobble up, Mattel didn’t quite have the same vision, leading the two to part ways.

Always eager to take matters into his own hands, Todd’s unhappiness with the way things went during the Mattel meetings inspired him to launch his very own toy company, founding McFarlane Toys in 1994. Though he originally focused on Spawn toys, which took the action figure world by storm, it wasn’t long before McFarlane branched out into the world of horror, starting the ‘McFarlane’s Monsters Playsets’ line in 1997.

The precursor to the Movie Maniacs line – which we’ll of course be delving into here on HL in the very near future – McFarlane’s Monsters Playsets were a way for Todd to re-imagine the classic Universal Monsters in his own vision, and Series 1 saw release in April 1997.

4.5” action figures packaged with build-able display dioramas, Series 1 of the Monsters Playsets line was comprised of Dracula, Frankenstein’s monster, the Hunchback of Notre Dame and the Wolf Man. Each figure also included various accessories and even additional bonus figures, allowing you to create your own horrific scenes.

Let’s take a closer look at each of the figures in the inaugural series. 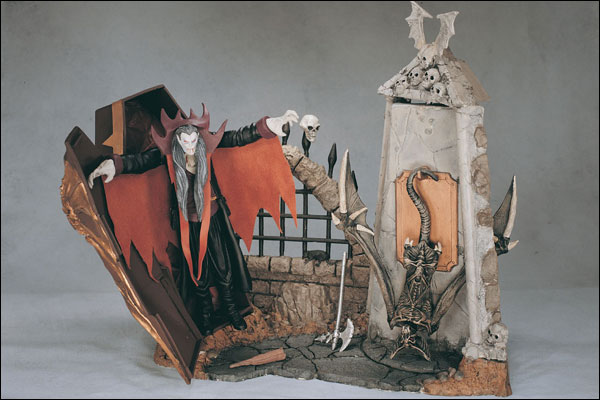 With a crypt-inspired base that included a removable coffin and rotating hideout, McFarlane’s take on Dracula was an extravagantly dressed monster with hair as long as his fangs, and a collar that would make Elton John jealous. Accessories ranged from a battle axe to a particularly cool-looking bat version of the character, which you could hang upside down on one side of the rotating wall. Also included was a wooden stake, with a hole in Dracula’s chest that the sharp end fit nicely inside. 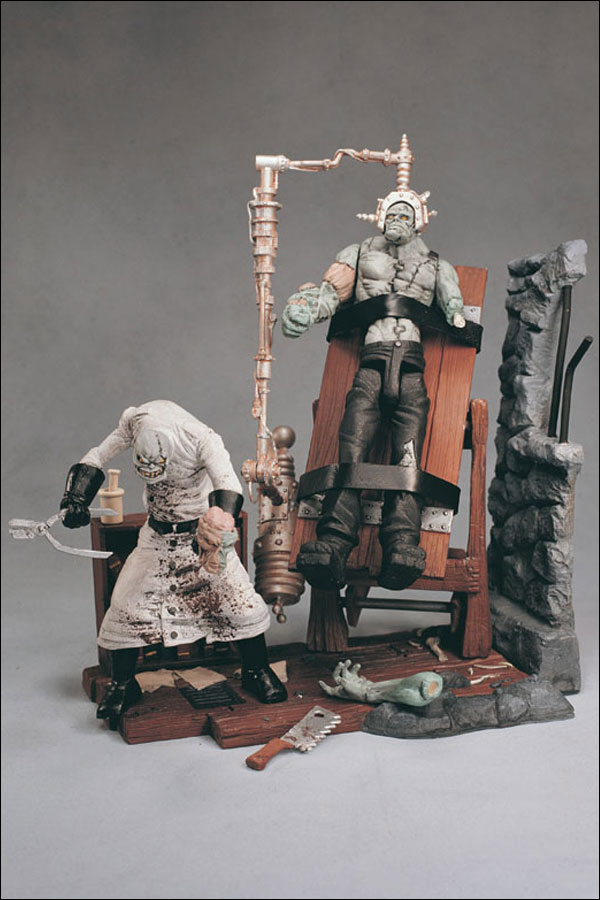 The Frankenstein-inspired playset included not just the monster but also the same-named doctor who created him, with the biggie-sized monster figure being the definite standout – and rightfully so. The monster’s body could literally be pulled apart piece by piece, and an alternate head was even included, with a removable brain. The laboratory display base for this one was also quite impressive, outfitted with an operating table and book shelf. Rounding out the set were small accessories like a knife, saw and hammer. 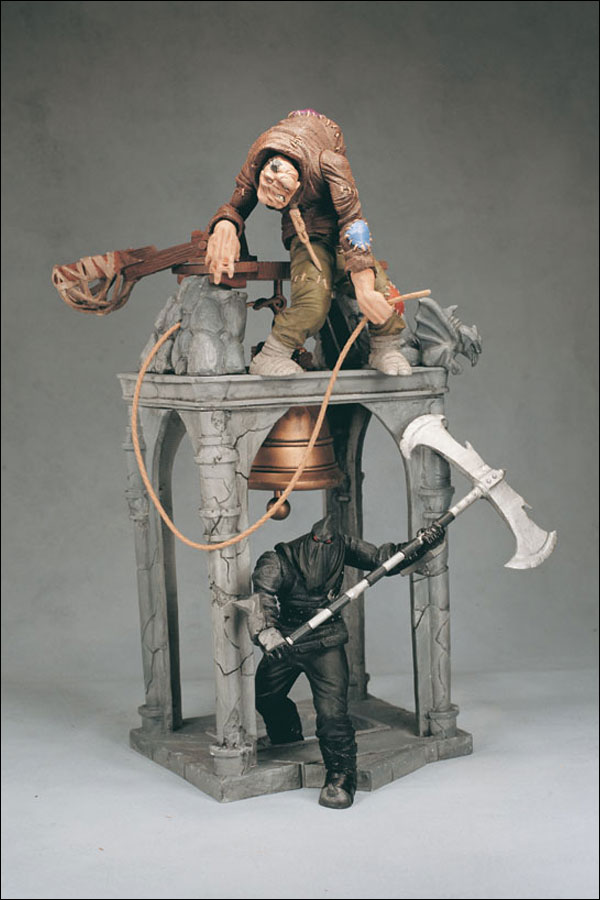 Up next we’ve got the Hunchback set, including both Quasimodo and an evil executioner. The bell tower display base included a bell (with rope), catapult and gargoyle sculpture, while the executioner wielded a blood-covered axe. Big fan of McFarlane’s executioner design in this one, which is utterly badass. Also love the fact that this playset came out just a year after Disney’s animated Hunchback of Notre Dame film – quite a different take on the story presented in that one, to say the very least! 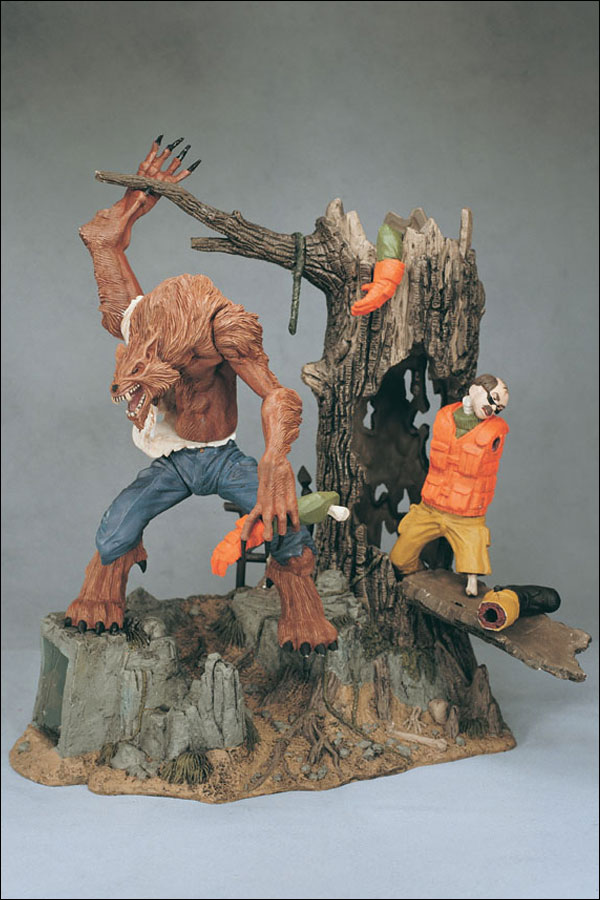 And finally, Series 1 was rounded out with the Wolf Man playset, packaged with a forest base that included a tree with a secret panel on one side. Though the werewolf figure is pretty cool looking, similar to the design of the wolves in Dog Soldiers, the coolest thing about the set is the included bonus figure of a hunter, whose body was comprised of five detachable pieces. Interesting to note that the ill-fated hunter’s head sculpt was based on McFarlane sculptor Steve Hamady, which is something the company often did with their generic human characters. 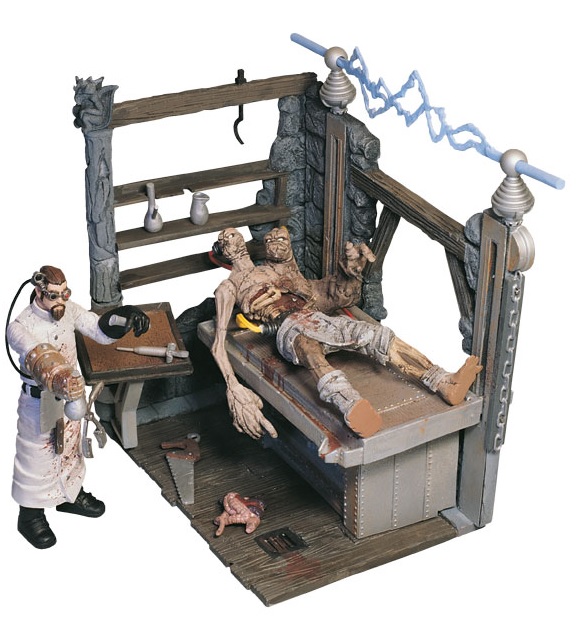 Oddly enough, Series 2 of the Monsters Playsets line, released in May of 1998, included another Frankenstein-inspired set, which again was comprised of the doctor and the monster. This alternate set was designed to link up with the Series 1 set, and in it the monster was designed as a two-headed abomination. The laboratory display base featured an operating table that rose up and down and accessories included various medical supplies and the monster’s internal organs. A cool companion piece to the Series 1 release, with a much gnarlier version of the monster – and a more human version of the good doctor. 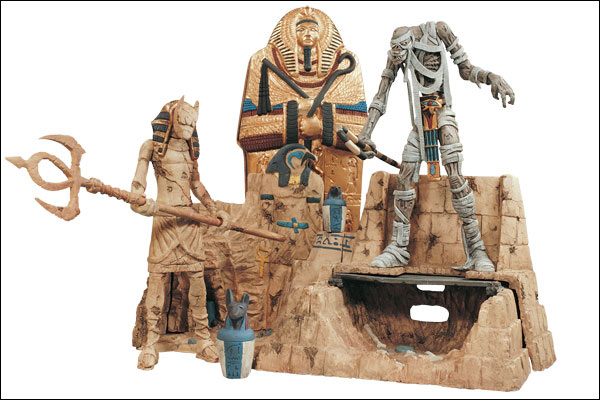 Also in Series 2 was the Mummy playset, comprised of the jackal-headed god Anubis and of course, a Mummy. The fittingly Egyptian display base featured a hinged sarcophagus, which was meant to house the zombie-like Mummy figure. A couple of canopic jars – used by the Egyptians to house the organs of the mummified – and two staffs were packaged with the set as accessories, as well as a two-headed snake that fit inside a pit on the base. 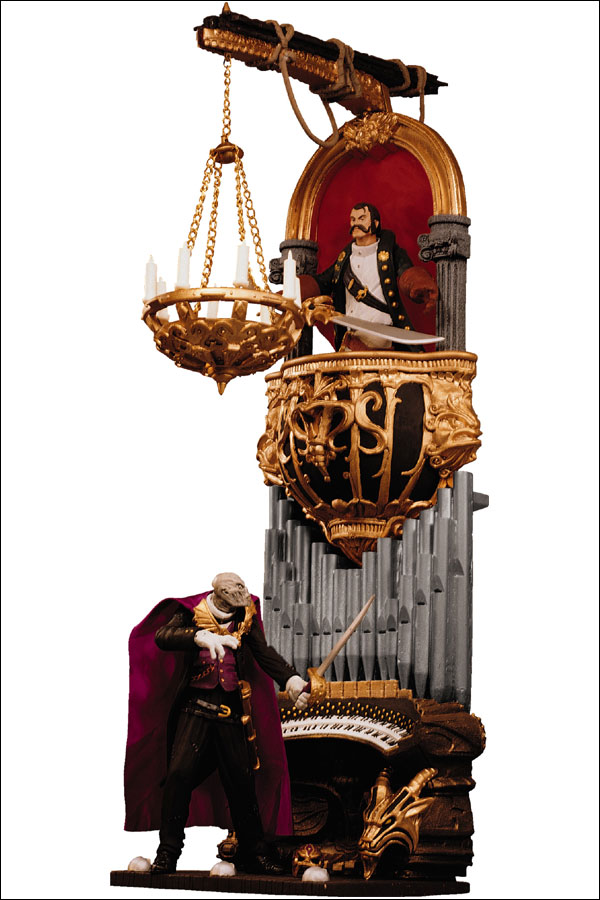 Next up is the Phantom of the Opera playset, comprised of the titular Phantom and a mustachioed actor. Both figures included removable masks and swords, and it was hands down the display base that set this one apart from the pack. Standing much taller than most of the bases in the line, the Phantom of the Opera set depicted an organ and theatrical balcony, as well as a hanging chandelier that could be dropped from the balcony with the push of a button. 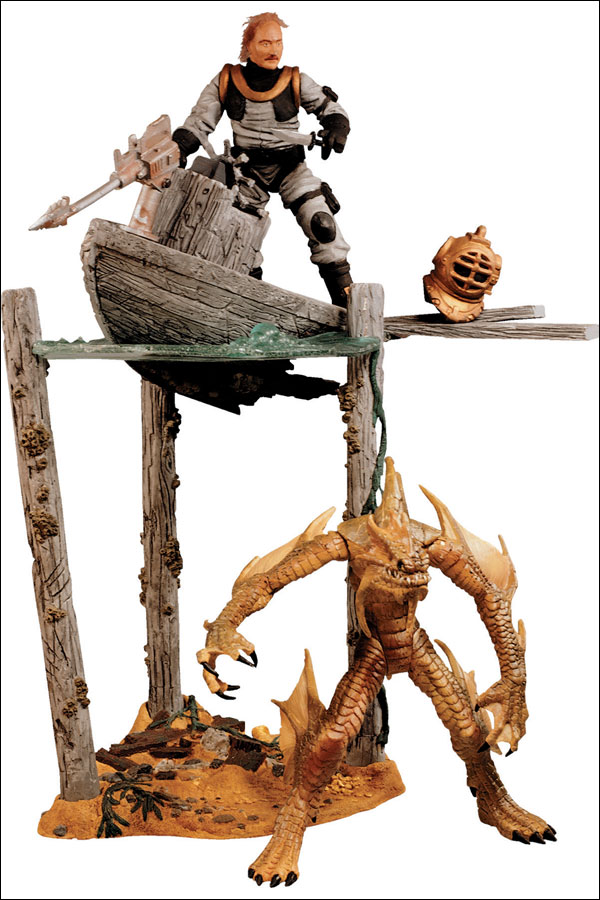 And last but certainly not least in Series 2 was the Sea Creature playset, including a diver with a removable helmet and McFarlane’s interpretation of the Creature from the Black Lagoon. The Creature may very well be my favorite of all the monster toys in the entire line, and the display base for this one was equally awesome. Conveying the idea of the Creature being underwater, the base was constructed with a sort of bunk bed approach, the top featuring a battle-damaged boat on a murky faux water surface and the bottom the ocean floor. The boat even featured a harpoon gun that actually fired, and the diver came with an alternate chewed up arm.

We’ll be delving into that line in Part 2 of our McFarlane Toys retrospective, so stay tuned for that real soon, right here on Halloween Love!