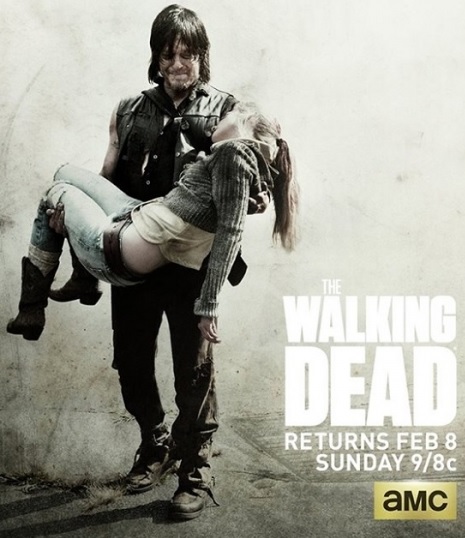 It’s somewhat unfair to review individual episodes of a TV show like The Walking Dead, as you can’t really judge any given season until the complete portrait is painted.

The final strokes of this particular painting were revealed last night, as Season 5’s first half was neatly, and tragically, wrapped up.

As a whole, Season 5: Part 1 was incredibly solid, though there’s no denying that the peak was achieved in the first few episodes. In many ways, episodes 1-3 of Season 5 comprised a stand-alone season of their own, and they were quite frankly some of the finest hours in the show’s entire history.

After an incredibly strong start, the subsequent episodes felt more like filler than anything else, with far too much time being devoted to one of the most dull storylines we’ve yet seen on the show: the plight of Beth, at Grady Memorial Hospital. I tried to care. I really did. But I just couldn’t.

Whereas the Beth storyline shouldn’t have been drawn out, and was, the Terminus storyline by all means should’ve been drawn out this season, and was not. That right there is my single biggest issue with the first half of Season 5, as a mid-season finale that saw Rick gutting Gareth would’ve been absolutely perfect.

In any event. Here are five major things that went down in ‘Coda’!

1) RICK PUT A BULLET IN LAMSON’S BALD HEAD. BECAUSE GRIMES IS BADASS.

The Walking Dead is at its absolute best when Rick Grimes is being a complete and utter badass, and boy was he ever in the first few minutes of ‘Coda.’ Grimes was in hot pursuit of Lamson, who had made his great escape at the end of last Sunday night’s episode, and when Lamson refused to stop running, the Sheriff of Badass rear-ended him with his own police car.

His back quite possibly broken, Lamson begged and pleaded for his life, but Grimes was having none of it. Finding himself with no desire to give the shady cop a second chance, Grimes put a bullet in his head, accompanied by a cool and collected one-liner that further solidified his status as a bonafide action hero: “Shut up.”

If there’s one thing that annoyed me about the previous episode of The Walking Dead it’s that Rick agreed to the Plan B suggested by Tyreese and Daryl, as he knows – like we do – that peaceful resolution just isn’t possible in this world. So it was really awesome to see that he totally reverted back to Plan A, when nobody was around to talk his finger off the trigger.

Now THAT is how you kick off an episode.

2) THE CHURCH WAS OVERRUN BY WALKERS. BECAUSE FATHER GABRIEL SUCKS.

Father Gabriel’s side mission was revealed last night, as it turned out that he simply wanted to see, for himself, whether or not the slaughtering of the Terminus crew was justified. Making his way to the school where Gareth and company ate Bob’s leg, Gabriel discovered the maggot-infested leg in question, finally making him realize that the world is fucked and he better start killing things.

With zombies hot on his tail, Gabriel quickly rushed back to the church, and begged for Carl & Michonne to let him back in. Proving that they’re better people than Gabriel, they responded to his cries for help by letting him in rather than letting him be eaten, though the opening of the church doors also let in a horde of walkers.

The church overrun with rotters, Michonne pulled out her trusty katana and sliced off a few heads, while Gabriel STILL refused to get his hands dirty – though he inadvertently split a zombie’s head in half, which was awesome. Thankfully, Gabriel had pulled up the floorboards last week, so he, Carl, Michonne and Judith were able to escape the church and crawl their way to safety.

As much as I hate the rampant CGI that’s present whenever Michonne’s sword comes out, it was nevertheless nice to see her go crazy with that thing again, as it felt like it had been a while since we really saw her do anything. Perhaps more than any other character, Michonne has really gotten the shaft this season, and hopefully that’s remedied in the second half.

3) BETH PUSHED A DUDE DOWN AN ELEVATOR SHAFT. BECAUSE SHE’S BRAVE AND STUFF.

For my liking, a bit too much time was spent at Grady Memorial last night, though I wasn’t complaining when a pretty epic fight went down. After one of the hospital’s cops confronted Dawn, and basically told her that he was going to oust her from power, Dawn drew her gun, which was quickly swiped down the elevator shaft. A fist fight ensued, and Dawn impressively held her own.

Realizing that she’d better choose a side, and determining that Dawn was the lesser of two evils, Beth got involved in the fight, pushing the crooked cop down the elevator shaft – to his immediate death. Beth had previously stated that she would never kill anyone, though this was totally a situation where it was justified.

After the fight, Dawn and Beth shared an adult cocktail, and Dawn once again tried to explain the confusing inner-workings of the hospital. She also expressed confidence that Noah would come crawling back to her, and it was that confidence that would be her downfall…

The episode was mostly a build to the inevitable hostage exchange, and the intense scene we’ve been waiting for comprised the last 10 minutes. Facing off in a hallway, it was Rick’s gang vs. Dawn’s gang, and all seemed to be going smoothly when Beth and Carol were handed over in exchange for the two cops.

Of course, peaceful resolution wasn’t meant to be, and it wasn’t long before Dawn got overconfident and demanded that Noah be handed back to her. Noah agreed, though Beth didn’t. She stabbed Dawn with a pair of tiny scissors, and Dawn responded by blowing a hole straight through Beth’s head. Once again, an even exchange was made between the two groups, as a sobbing Daryl put a bullet in Dawn’s head.

Though I tend to be emotionally devastated by Walking Dead character deaths, I must admit that Beth’s demise didn’t quite depress me the way others have. In addition to being painfully predictable, I always saw Beth as an expendable character, despite this season’s admittedly valiant effort to make her something more. A fine job was done in doing so, but I just never bonded with her the way I did other characters who met gruesome ends.

That said, there is something to be said for the way Beth went out, which was both heroic and yet so very innocent. In that moment before her death, I felt like I finally understood the character, just as she finally understood what Dawn was all about.

Still though, I’m more happy to see that storyline wrapped up than I am sad that Beth is gone – just being honest!

5) THE GANG RE-UNITED. BECAUSE MID-SEASON FINALE.

At the end of the episode, the entire crew of ‘good guys’ was finally reunited, though it wasn’t that happy sort of reunion. Just as Maggie approached the hospital, excited about the news that Beth was still alive, Daryl emerged with Beth’s dead body in his arms, pulling the rug right out from underneath Maggie and breaking her heart into a million pieces.

I hate to be a Walking Dead ‘hater,’ as there are already too many of those, but even I can’t justify the fact that the writers never bothered to show us that Maggie was sad about her sister being gone, prior to last night. I must admit that I had forgotten the characters were even sisters, which is needless to say not something I should’ve forgotten. One scene showing Maggie’s grief, earlier in the season, would’ve gone a long way, and I can’t help but feel the ball was dropped on that one.

Much like the Season 5 premiere, the mid-season finale ended with a brief scene involving Morgan, who found his way to the church. Inside, he discovered the map to Washington that Abraham gave to Rick, making Morgan realize that he’s not too many steps behind his old friend. Not sure where they’re going with this whole storyline, or why it’s continually being teased like it’s a big deal, but I can only assume that Morgan will be fully integrated back into the show come February. So… cool?

Everything that should’ve been wrapped up last night was wrapped up last night, so color me happy with the way things went down. It was far from the best Walking Dead finale we’ve seen, but it effectively brought about an end to a storyline that had quickly worn out its welcome, and I’m very happy about the fact that the show will once again be completely reinventing itself when it returns.

I honestly have no idea where the show is going from here, which is always an exciting feeling. Here’s to hoping Season 5: Part 2 is more in line with the first half of Part 1, than the second. The seasons tend to be book-ended by awesome, but I’d love to see a bit more excitement peppered in throughout, rather than reserved for big premieres and finales. Getting a bit too predictable, in that sense.

What did you think of last night’s mid-season finale? Let’s continue the discussion in the comments section below!