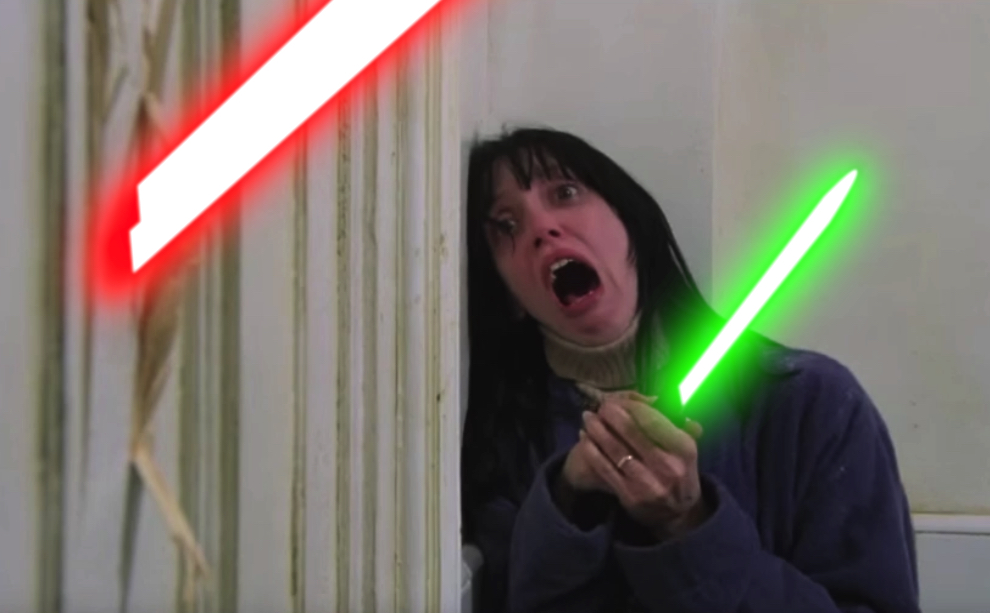 Like most kids born in the 1970s I spent a good portion of my childhood obsessing over Star Wars, and when I look back at those days I can see how it very clearly guided me toward an appreciation and love for ALL movie types and collectable merchandise. It was the beginning of a passion, and horror was the genre that emerged from the crowd to capture my heart the most as I got older. My childhood was a blur of plastic spaceships and copies of Fangoria magazine – I can’t think of a better way to grow up!

Today I want to celebrate this crazy combination (AND the impending release of the new Star Wars movie) by letting my imagination run wild. Lightsabers are the coolest weapons in movie history – so what would some memorable horror and Sci-Fi genre moments look like if these devices had always been a reality?

It’s now time to answer that question by calling upon my inner child to inspire me through a marathon photo manipulation session! I don’t think I’ll be getting a job at ILM any time soon, but considering how much he likes to change stuff, I’m sure uncle George would be impressed. Or at least mildly disturbed – I’d take either!

Blades and blunt objects are history. Bring on those buzzing shafts of light! 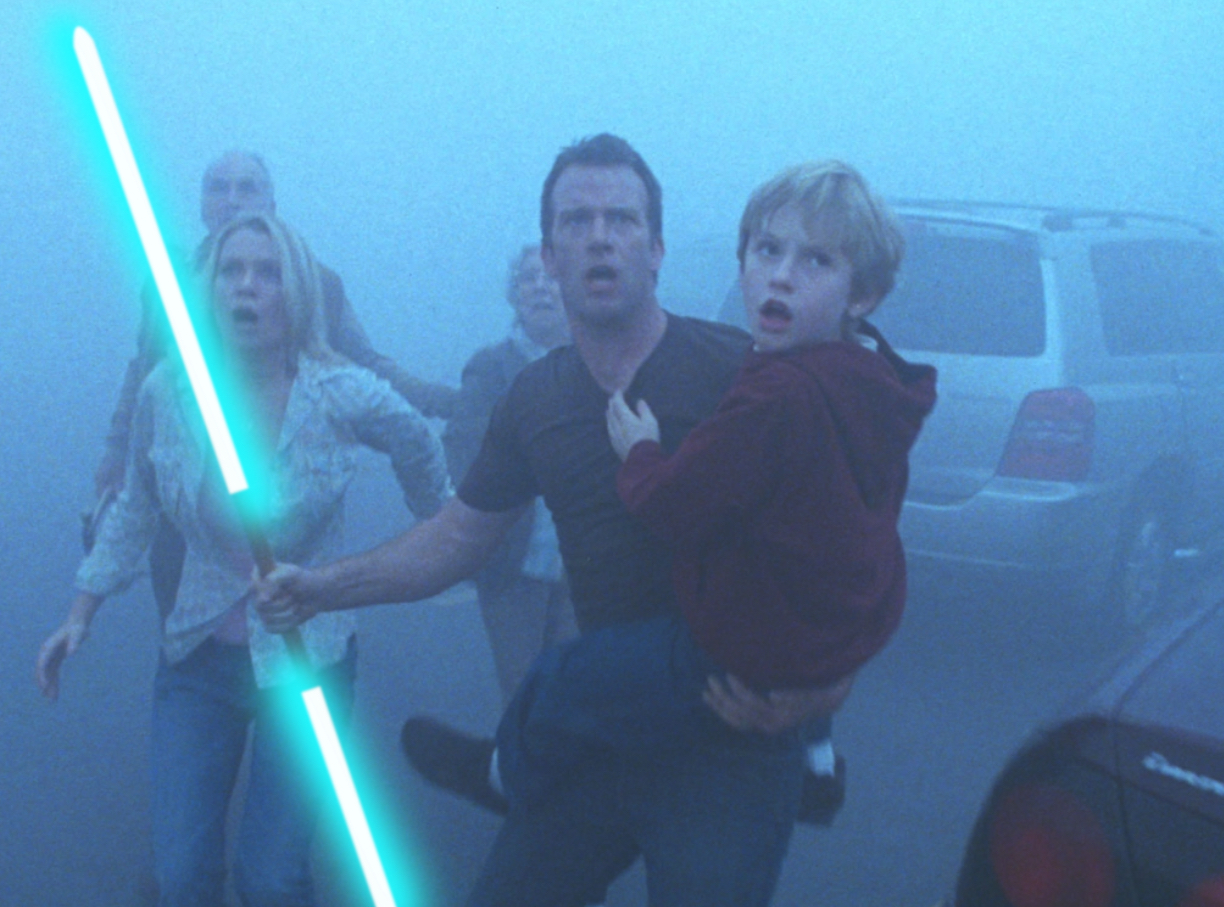 Fuck broomstick handles and guns! If Thomas Jane had been packing a double-bladed lightsaber he would have been out of that supermarket and back home in time for supper! Plus, don’t you think it sort of looks like one of those blue bug zappers you see hanging in restaurant kitchens? All he would need to do is stand still, hold it above his head, and await the inevitable hypnotized monster suicides that would soon follow.

The Silence of the Lambs. 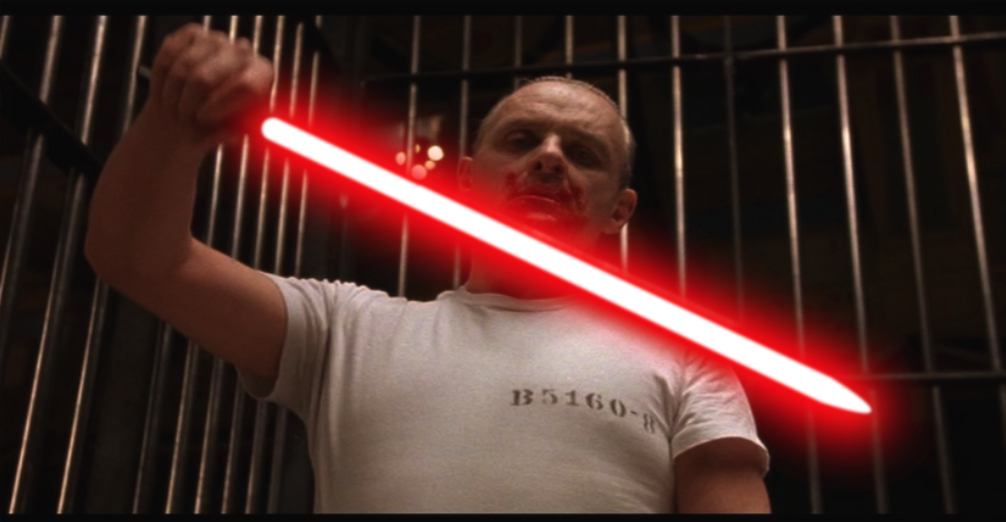 Perfect for everything from neatly slicing the face off a cop, to just dicing vegetables in the kitchen. Hannibal would get PLENTY of use out of this “elegant weapon for a more civilized age” … Admit it – this INSTANTLY makes AVP Requiem look about 200% better! Plus anything that illuminates this ridiculously dark movie can only be a good thing. 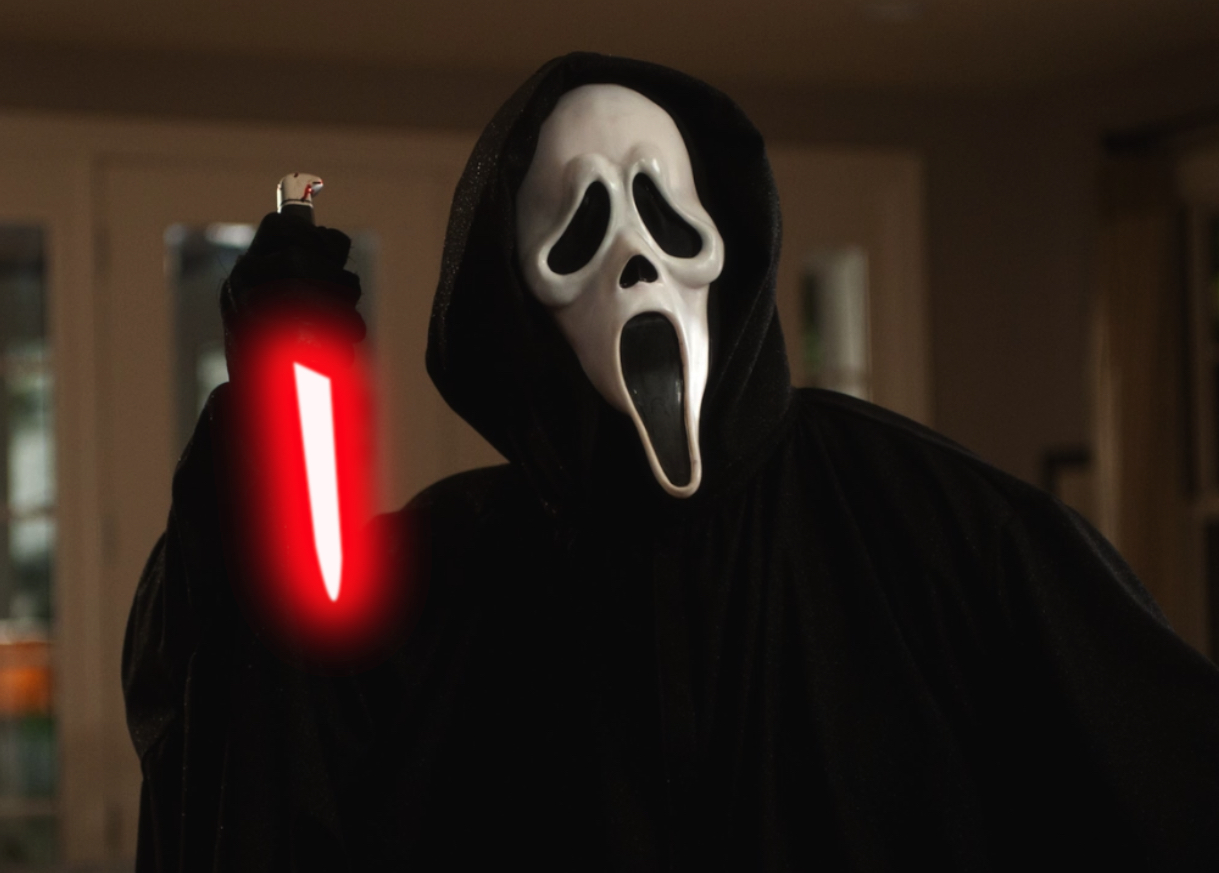 Ghostface likes to get up close and personal with his victims, so a light-KNIFE is much more appropriate here. The only problem as I see it would be the considerable amount of times Ghostface stumbles or falls when he’s chasing his screaming groupies. Basically, he’s a SERIOUSLY clumsy fucker! And when you’re carrying technology like this – falling on it really isn’t an option! 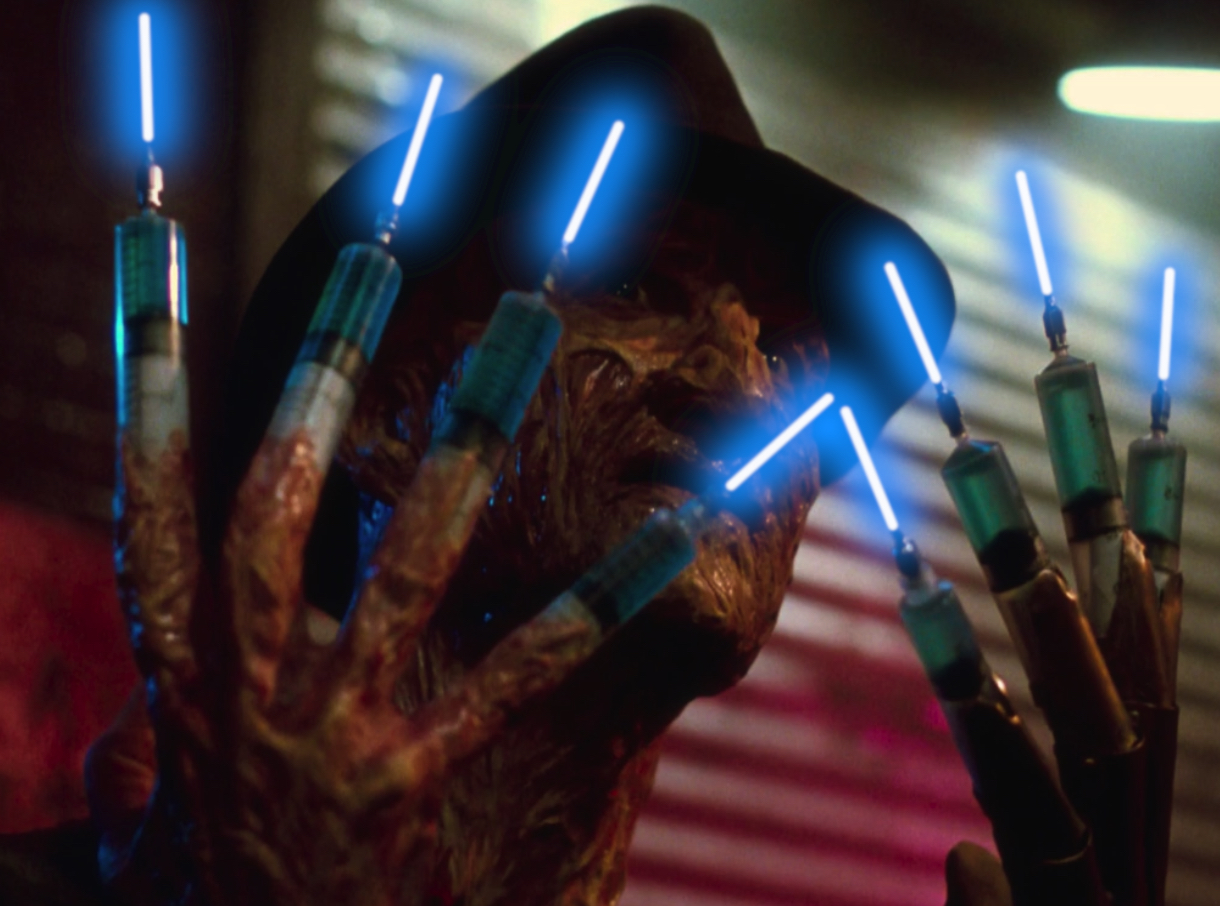 Taryn is about to get VERY high! Nothing gets through skin and finds an artery like a TEENY-TINY lightsaber. Ok, I admit Michael is losing a LOT of his stealth capabilities by carrying around a large glowing lightsaber, but come on! The guy never had a childhood, he would probably LOVE swooshing the thing around and chasing Laurie with it in the darkness. And I made it seasonal ORANGE! 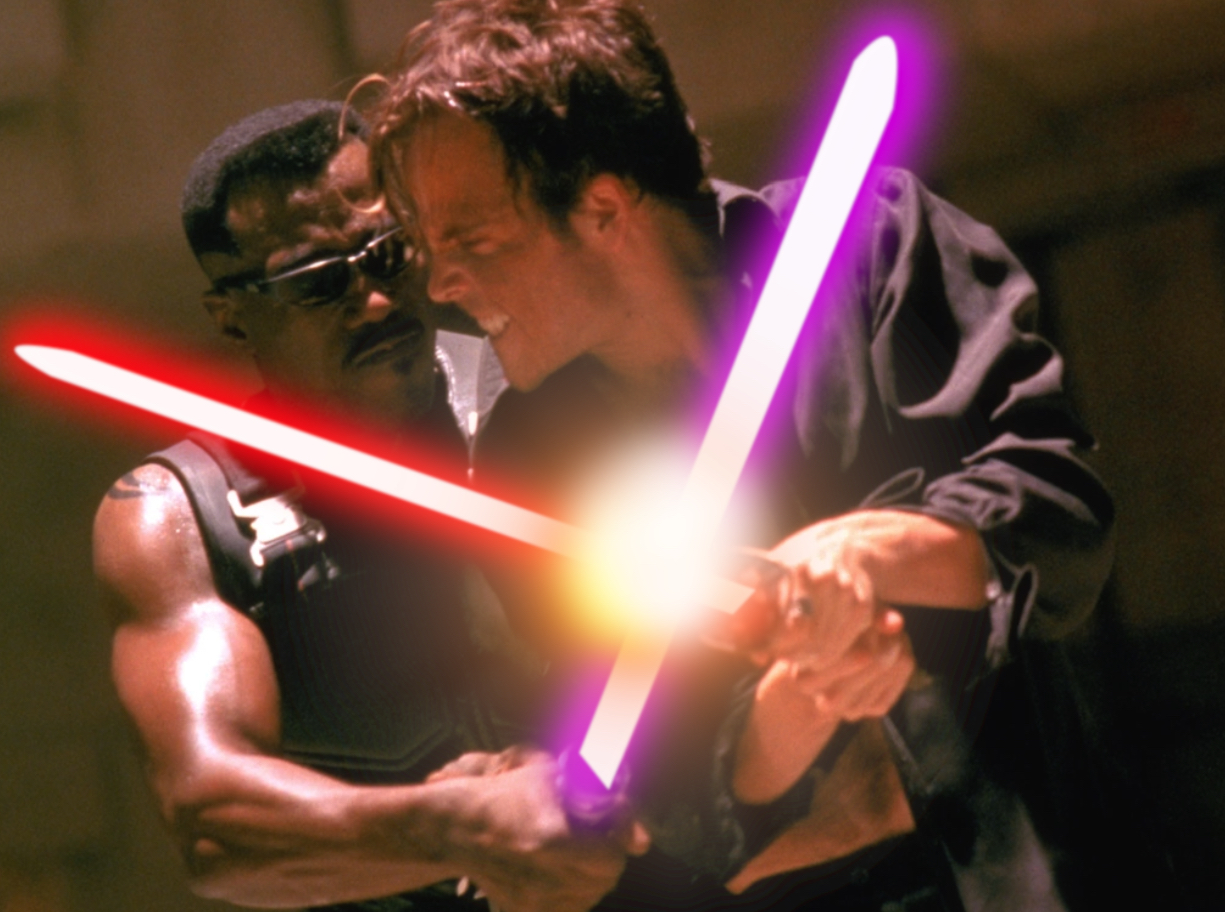 Rumor has it that only the coolest dudes in the galaxy get a purple lightsaber. So giving one to Wesley Snipes as Blade was a no-brainer. Dorff will have to settle for red. 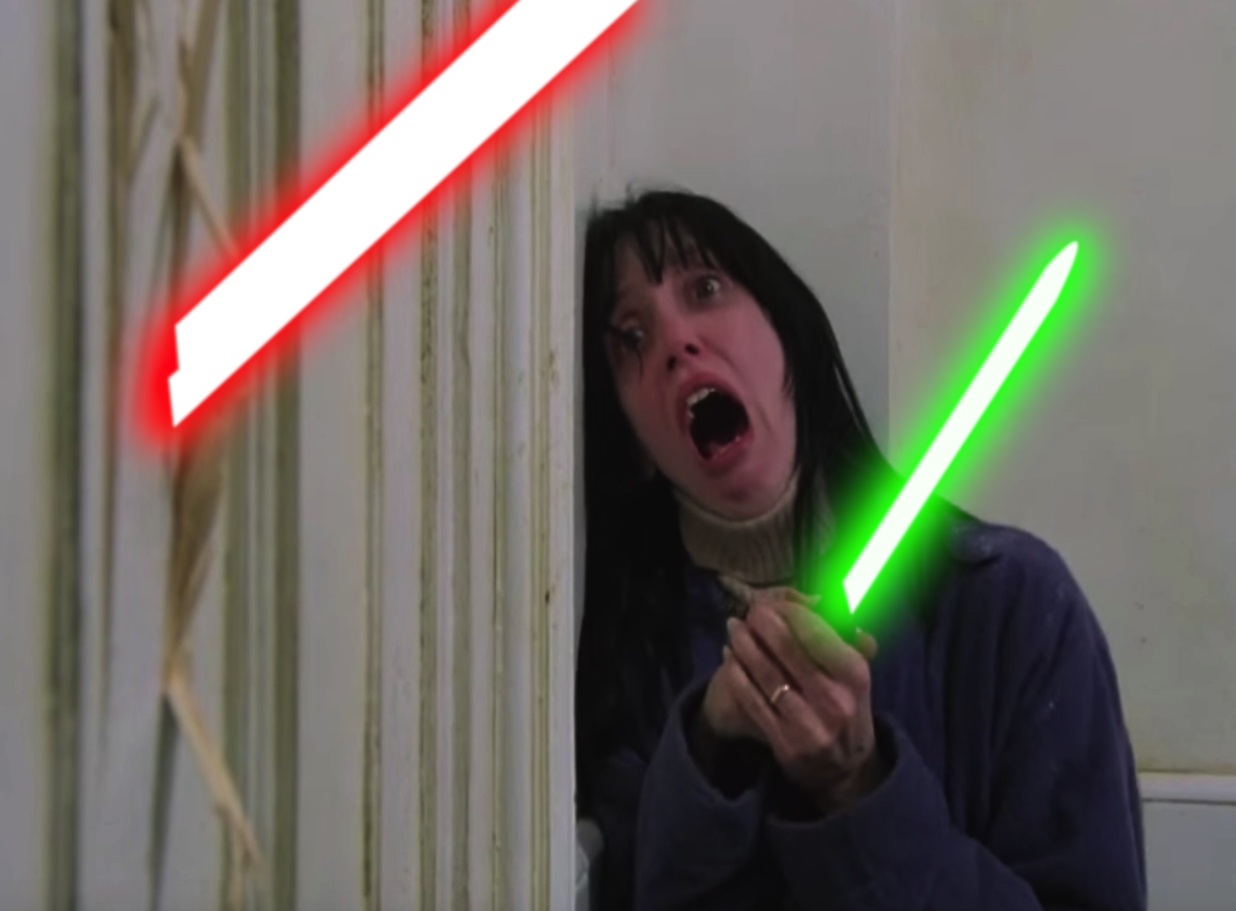 Sorry Wendy, but Jack is going to be through that door and grinning at you in about ten seconds, thanks to his upgraded door chopper! Then after he slices his way through the maze to find little Danny, he can return to the hotel for a well earned drink! 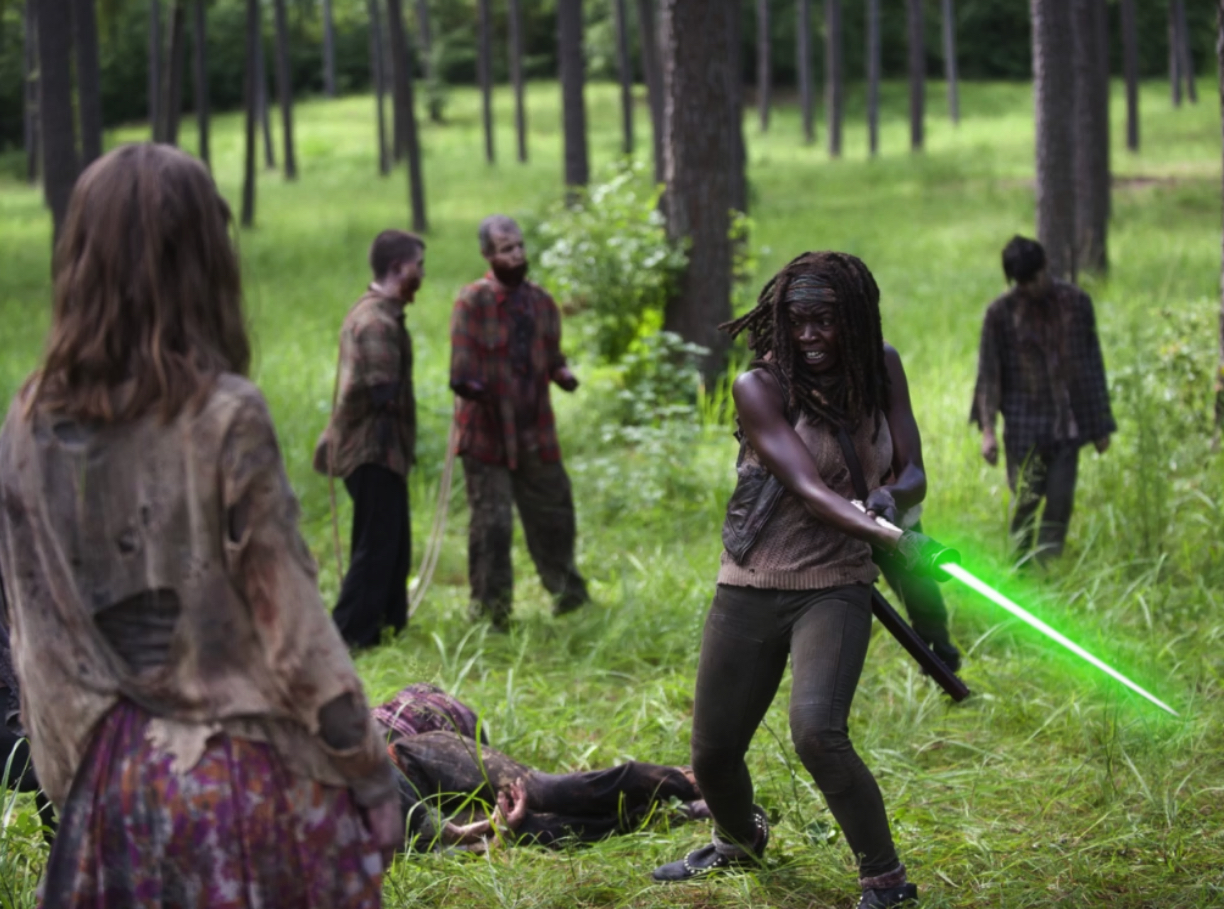 Zombie apocalypse? No problem when you have lightsabers at your disposal. Just find a picturesque spot in the woods, make some noise, and start swinging! You’ll be knee-deep in chunks of zombie by lunchtime.

A Nightmare on Elm Street. 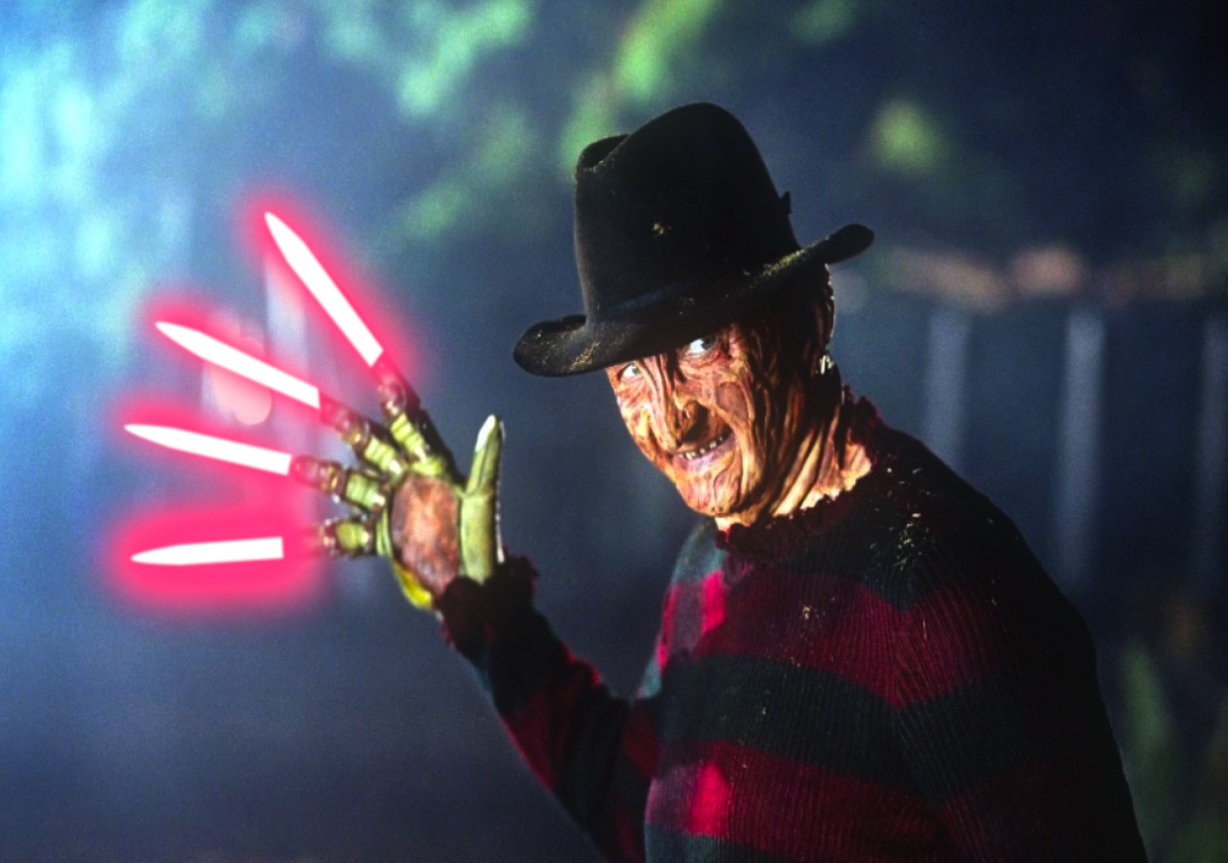 Nice! But I’m a little worried about how Freddy will react when he discovers that a glove like this will INSTANTLY cauterize all wounds, meaning no blood! Johnny Depp’s death scene would SUCK without the red stuff. Pulled into his bed then – NOTHING! Nope, light-GLOVE isn’t going to work guys, far too PG-13. 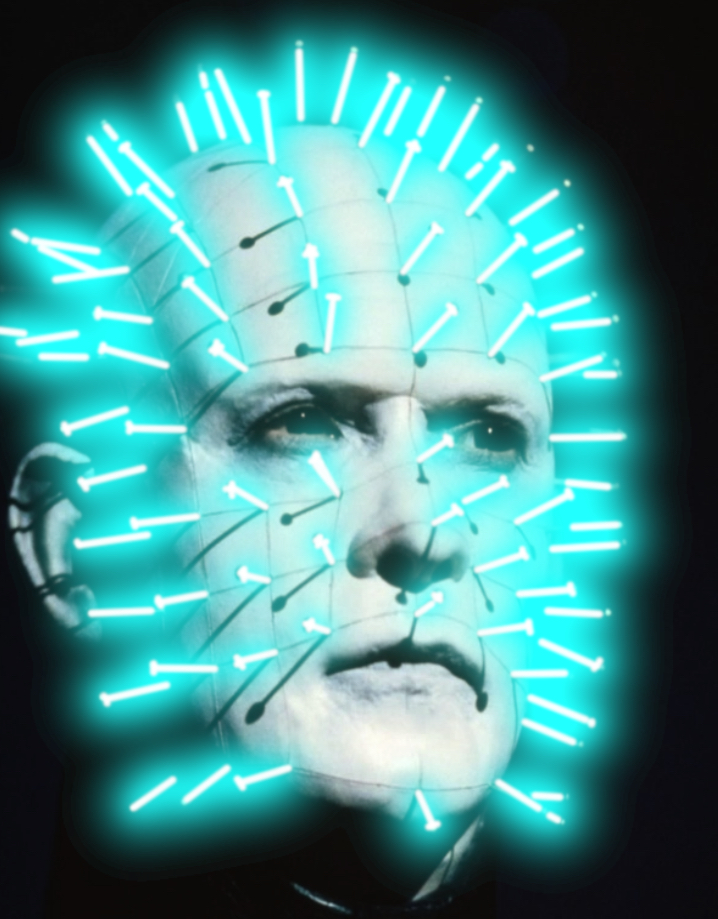 Errrrrrr … I dunno? Wanted to see what it would look like. Kinda festive.

Until next time, may the FEAR be with you!