Ok, I have a confession to make – I own a LOT of the Kenner Aliens action figures and am slightly obsessed with them. You know, those crazy lumps of plastic that warped Giger’s beautiful creation into bizarre and tacky toys that basically wanted us to believe that a facehugger would attach itself to ANYTHING!

Now, I hated them in my youth, they came out when I was in my early teens and all I really wanted were figures that looked like the Aliens I knew and loved from the movies. It was mildly exciting to see them release such an unusual and brave line of toys, but I just couldn’t really get on board with them, at all. However something changed as I got older and some sort of twisted nostalgia hit me about 18 months ago when I spotted an ebay auction that featured a near complete collection in one job lot. I waited, had a cheeky bid toward the end, and got the whole bundle for a very reasonable price.

Looking at them when they arrived, through adult eyes, there was definitely more to appreciate. As I mentioned above, it’s a fact that this was a daring and risky line of toys to create, the modern era of high quality adult targeted toy lines hadn’t properly arrived yet and visually they would only appeal to a very small range of children. They were generally fun to play with – each figure came with an ‘action feature’ that was usually activated by pressing a button or squeezing their legs together, this would then cause body parts to fly off like organic ‘missiles’ or in some cases the figure would simply fall apart, as if hit by some kind of pretend grenade – or maybe old age?

They are also robust toys. Solid, durable and designed to last. The collection I purchased had been played with but more or less looked as good as the day they were opened. 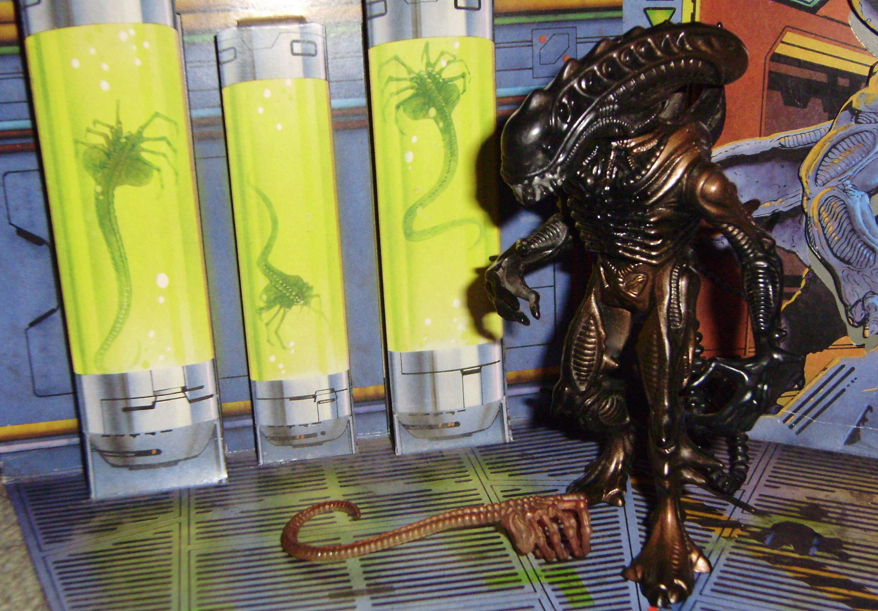 There were a few exceptions to the ‘crazy’ designs they were churning out. The strangely named ‘Scorpion Alien’ actually looked very good and had a similar design to the Aliens Jim Cameron featured in the second movie. They also released a 2-pack that included a VERY nice Alien figure with a smooth, slightly transparent head straight out of the original movie. Most impressive of all was the legendary ‘Queen Hive Playset’ which was a wonderful but head scratching anomaly within the Kenner line … 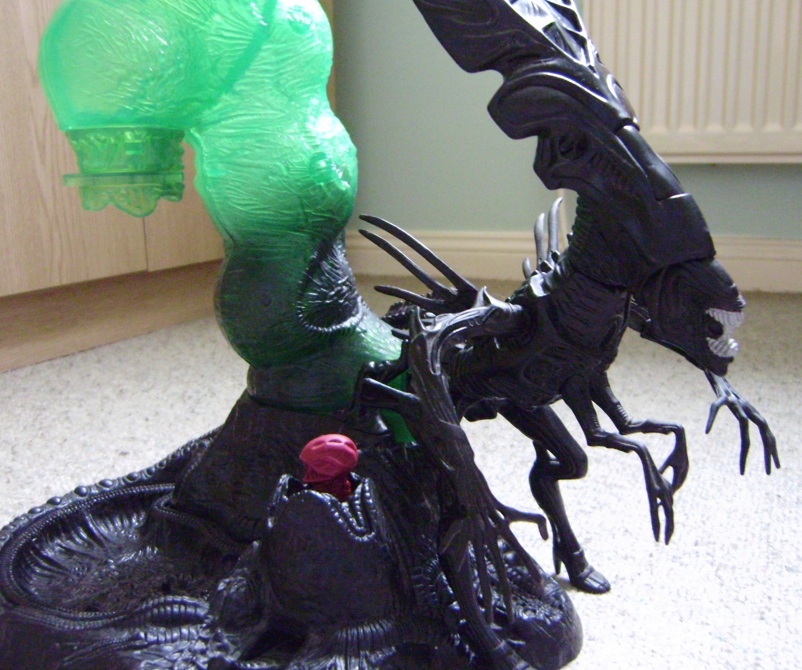 The base that came with the set was a horrible lump of plastic designed to ‘slime’ your human figures. It had a quite pleasant transparent green look going on, but it was very cheaply made and also featured a hilarious little ‘hatchling’ which looked like a lump of red clay that had been rolled into a small tube and then had a crude Alien face scratched onto one end. It was terrible!

None of that mattered though after you saw the figure of the Queen – she was STUNNING! Seriously, this thing is not far off being totally movie accurate, it just looks incredible and has nice articulation and a very cool little feature in the neck that allows the face to move from side to side without the rest of the massive head turning as well. I’ve seen recent Alien Queen figures that didn’t look this good. The Queen in the movies is slender, not bulky at all, this figure nailed that visually and is just perfect when on display.

I can only assume they decided the Queen didn’t need any crazy visual altering for this set, despite the fact Kenner also released an individual Queen toy that looked like it had been eating McDonalds its entire life. Though to be fair, ‘fat Queen’ DID have a snapping inner mouth that would zoom back and forth when you pressed a pad at the rear of her head. That was fun to use as a kid.

Of course with all these different Aliens running around you needed some human characters to battle them on your bedroom floor, and Kenner also went a bit nuts in that department by making figures based on many of the Marines from Aliens – but apart from their names you REALLY wouldn’t know that by looking at them. Not surprisingly they didn’t get image rights from the actors, so Ripley, Hicks and the rest of the gang got significant and unintentionally hilarious redesigns. My favourite being Bishop who was now a bald cyborg who enjoyed wearing some kind of bionic sunglasses. This figure even came with a character ‘bio’ card that featured Lance Henriksen’s face altered to look like the ‘kick-ass’ Bishop. The madness never stopped. 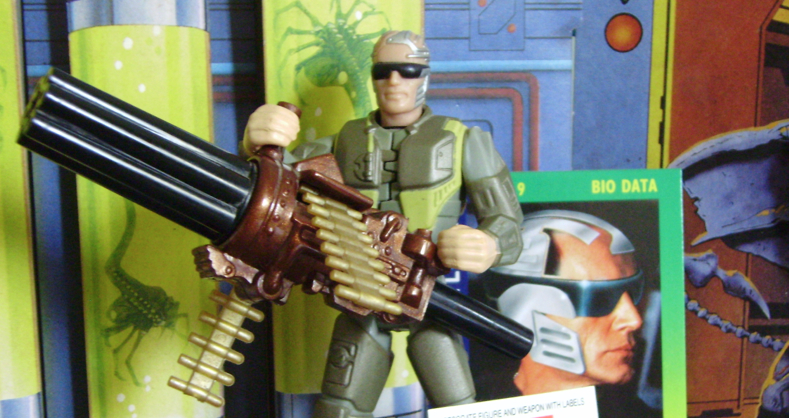 It was a crazy line of toys, ranging from the truly terrible to the impressively awesome, and I think that’s what I appreciate most of all now. There just hasn’t been anything like it before or since. They took characters from very adult movies and turned it into GI Joe in space. I don’t know who first pitched the idea but I’d shake their hand if I could, that person had balls!

AND, the insanity almost reached TV screens at one point as well, something I only recently discovered. Within the collection I purchased there were a few items that were branded with an ‘Operation Aliens’ logo. A quick search online revealed the true horror of what this potentially could have been – a Saturday morning kids cartoon show!

It never got off the ground and some stills from what must have been a pilot episode are all that remains of that little idea. As much as I love the Alien franchise I think we should all fall to our knees and be grateful that it never saw the light of day. I’m happy just to own the action figure carry case that DID make it to the store shelfs, and the funky prismatic jigsaw puzzle that I have yet to attempt. 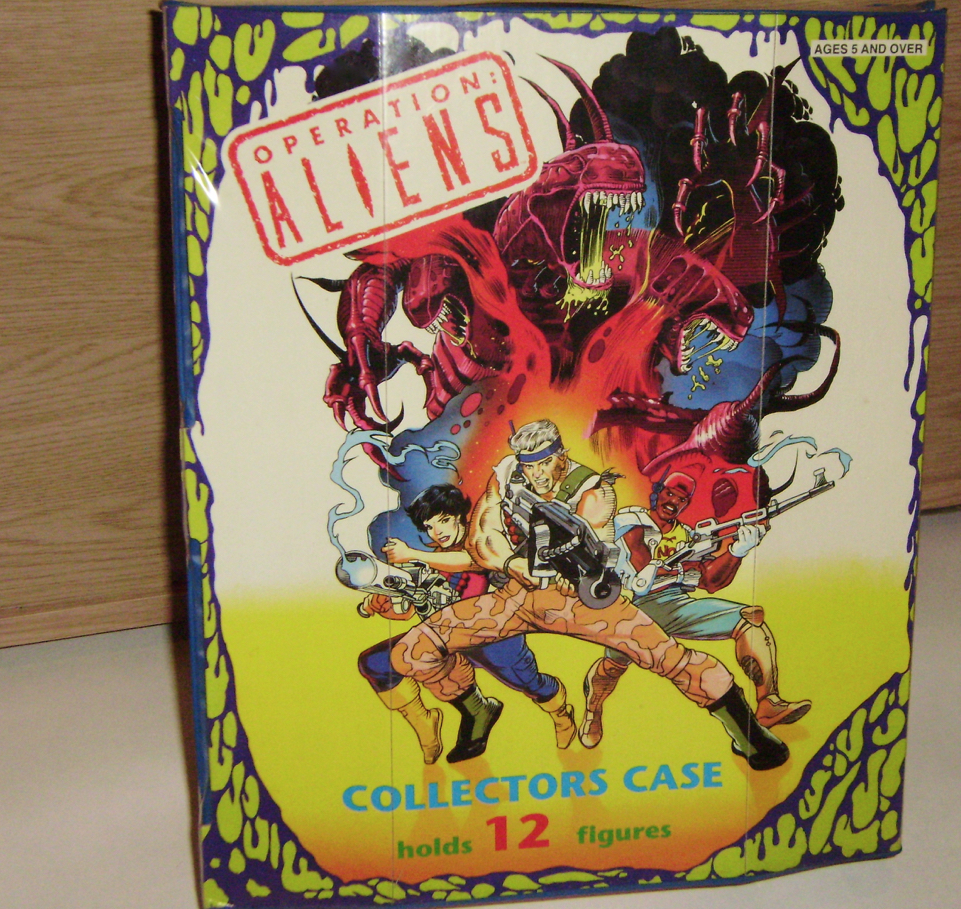 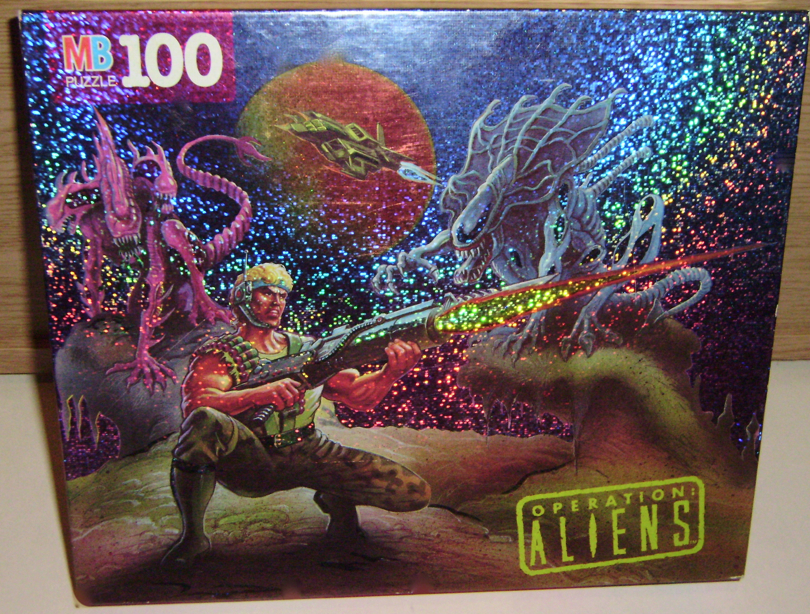 So I salute you Kenner and I salute your twisted little creations. Like watching a three legged cat trying to cross a street – you might start off pitying it, you might even find it slightly amusing – but ultimately you will be impressed at the sheer effort and stubborn determination involved to do something that should have been near impossible.

I’m off now to play with the Alien that apparently emerged from a praying mantis … How is that even possible?!! 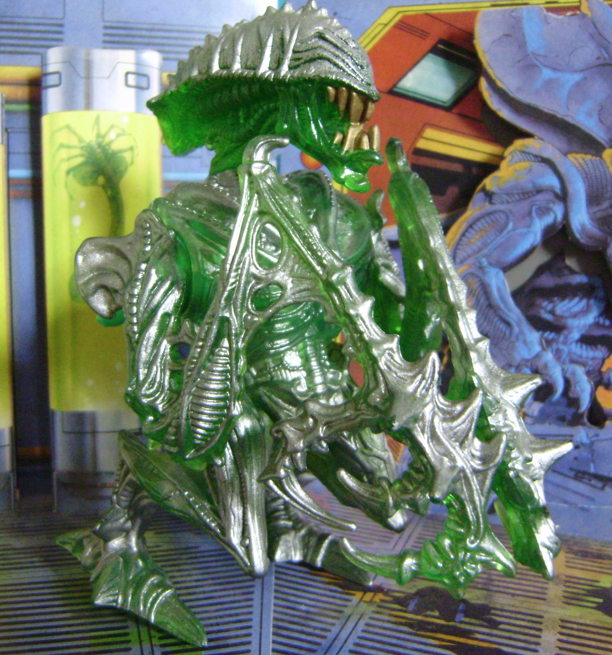