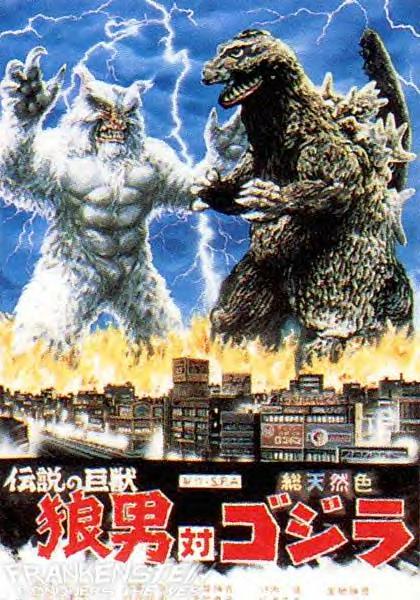 Yesterday we reflected on that time some of the biggest names in 80s horror almost made a Godzilla film, back in 1983, and today we continue the unmade Godzilla fun by looking back on another five planned movies starring the King of the Monsters, which never quite managed to get off the ground, and find their way in front of cameras.

You don’t get to 32 installments without losing a few along the way, and these five lost films are some of the whackiest of all time!

After Godzilla vs. Mechagodzilla and Godzilla vs. SpaceGodzilla, Toho decided to just go for it and let Godzilla battle himself, with Godzilla vs. Godzilla planned for release in 1995, as the 22nd official installment in the franchise. Sometimes referred to by the title Godzilla vs. Ghost Godzilla, the plot for the film was to see the rise of an identical radiation-created lizard creature, who ends up incurring the wrath of the original Godzilla, who died in the 1954 film. The original Godzilla was going to return as a ghost and engage in a battle to the death with his modern day counterpart.

Ultimately, the studio decided that the film was just too similar to the previous installments in the series, which saw Godzilla battling a robot Godzilla and then an evil space doppelganger, and the idea was completely abandoned. Godzilla vs. Destroyah ended up being the 22nd film.

After a failed attempt in 1963 to make their own version of Frankenstein, Toho decided to try again shortly thereafter, and pit the Universal Studios monster up against their monster. The basic gist was that the heart from the original Frankenstein monster was going to be exposed to radiation and then used to give life to a new monster, who would rapidly grow to the size of Godzilla. In the script, the Japanese Self Defense Force fears that the giant Frankenstein will eventually start consuming humans, and so they unthaw Godzilla, using one monster to destroy another.

Toho ultimately decided that it didn’t really make sense that Godzilla would be brought back to life to save the world from another monster, since he himself was a dangerous villain, and the project was forever shelved. They did, however, release Frankenstein Conquers the World in 1965, which similarly featured a battle being a giant Frankenstein’s monster and a Godzilla-like Kaiju.

Though Toho was churning out a steady stream of Godzilla films in the 50s, 60s and early 70s, they took a bit of a break after the release of 1975’s Terror of Mechagodzilla, and it wasn’t until nine years later that Godzilla returned. During that downtime, a few former Toho filmmakers got together and essentially made a Godzilla fan film, without the approval of Toho, titled Godzilla vs. Wolfman (poster seen at the top of this post). Much like Godzilla vs. Frankenstein, the film was centered on a giant-sized Wolfman doing battle with Godzilla.

Presumably because Toho didn’t give their approval to the project, Godzilla vs. Wolfman was never released in 1983, as planned, and in fact it still to this day hasn’t seen release. The film was completely shot, and footage has been shown at the annual Godzilla convention G-FEST, but as of now there are no plans for its release.

After the smash-hit success of 1962’s King Kong vs. Godzilla, Toho was naturally looking to mash their most popular property up with other big time franchises, and in 1965 they proposed a collaboration with the popular Batman TV series. The idea was to have Adam West’s Batman and Burt Ward’s Robin go on a business trip to Japan, where they’re forced to use all their tools and clever tactics to fend off a rampaging Godzilla. The film was proposed as a comedy, with the same campy spirit of the TV show.

Nobody knows for sure whether or not DC Comics was even approached with the idea, and before a script was fully written, Godzilla vs. Batman found its way into the dreaded development Hell.

GODZILLA VS. THE DEVIL

Though many have questioned whether or not this was an actual project considered by Toho, it’s been reported that Godzilla vs. The Devil was proposed in 1978, as a way of making up for the poor box office performance of Godzilla vs. Mechagodzilla. Allegedly inspired by the success of films like The Exorcist and The Omen, the film was to see Godzilla fighting off all sorts of different monsters, from a giant spider to a demonic fish, with him engaging in a climactic final battle with Satan himself.

It’s said that Toho ultimately wasn’t all that into the idea of infusing supernatural elements into the series, though again, it’s hard to tell whether or not such a film was ever really in the works, or if it’s merely a Toho myth.