A full sixty years after stomping his way onto the scene, Godzilla makes his long-awaited return to the big screen this weekend, in the form of a brand spankin’ new American-made reboot. The Gareth Edwards-directed film is the King of the Monsters’ 32nd outing, making Godzilla the longest-running franchise in cinema history.

In the massive wake of his initial arrival in 1954, the big green guy has gone on to battle other popular movie monsters in a slew of sequels and spin-offs, and he even gave birth to a son, back in 1967. I could of course go on and on about the many Godzilla films that have been released in the past sixty years, but instead, I thought it’d be more fun to shine the spotlight on one that never actually got made, finding itself in development hell over 30 years ago.

Believe it or not, it was Friday the 13th: Part 2 & 3 director Steve Miner that pitched an American remake of Godzilla to Toho back in 1983, proposing the idea of giving King Kaiju a three-dimensional makeover. Toho is the production company responsible for the original Godzilla film and since they own the rights to the property, anyone interested in doing anything with the character has to first get approval from them.

Titled Godzilla: King of the Monsters 3D, Miner’s pitch was approved by Toho, and the pre-production process began. Miner quickly put together an impressive team of talent to help bring the project to life, starting with Fred Dekker, who he hired to write the script. At the time, Dekker hadn’t yet made a name for himself in Hollywood, but it was a few short years later that he became a household name amongst genre fans, writing/directing fan-favorite 80s flicks Night of the Creeps and The Monster Squad.

Dekker’s script for the 3D Godzilla revival, which can be found online, kicked off with a meteorite colliding with a U.S. satellite, launching a nuclear warhead into the South Pacific. The atomic explosion results in the awakening of Godzilla, who emerges from the water and destroys a village near Tahiti, using his fiery breath to turn it into a desolate wasteland.

Though I encourage you to track down the entire screenplay, or at least a full rundown of the plot, the basic gist is that Godzilla eventually arrives in San Francisco, destroying the Golden Gate Bridge and threatening to lay waste to the entire city. The plan is to lure the beast out of the city and destroy him with Soviet anti-fission missiles that were found on a sunken Russian submarine earlier in the film, which goes awry when a villainous KGB agent – who has a retractable steel blade for a hand – demands the return of the missiles.

Eventually, Godzilla incinerates the Russian agent with a blast of his breath and he is indeed destroyed as planned, when one of the missiles is fired directly into his mouth. In the end, we were to realize that Godzilla was merely looking for the corpse of a fallen fellow Kaiju, in the possession of the U.S. military, and that he wasn’t all that much of a monster, after all. In a tender moment at the end of the film, Godzilla spends his final moments saving the life of a young child, who had developed sympathy for the beast. 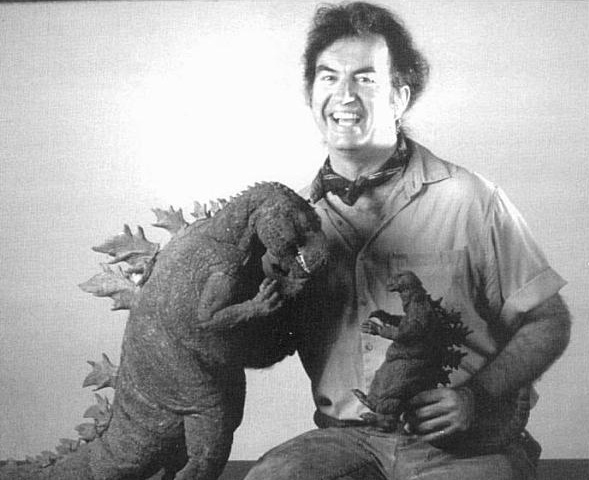 With the script written, Miner hired William Stout to develop concept sketches for the film, which serve as our only visual insight as to what the movie was going to look like. Stout is perhaps most known to horror fans as being the production designer for Return of the Living Dead, most notably designing the zombie known as Tarman, and he drew up several design drawings for the titular monster, which were used to develop a few storyboard sequences. Stout also created a concept sculpt of his version of Godzilla (seen above, on the left), which was going to be brought to life through stop-motion animation, rather than with a costumed actor.

In addition to Miner, Dekker and Stout, makeup effects artist Rick Baker – fresh off of winning an Oscar for his incredible work on An American Werewolf in London – was also on board, tasked with creating a cable-operated Godzilla head, for close-up shots. As far as I’m aware, however, the project never reached the point where Baker began work on the design.

Though a few different studios and producers were interested in Miner’s film, it was the budget needed to get it done that ultimately spelled the end of the project, as nobody was interested in dropping $30 million on what was at the time considered a “children’s film.” Miller eventually gave up on the idea in 1984, and he went on to direct films like House, Halloween H20, Lake Placid and that godawful 2008 Day of the Dead remake that most horror fans don’t acknowledge the existence of.

(Proving that the times have changed a whole hell of a lot, Godzilla 2014 was made on a budget of $160 million – more than 5X the budget that Miner was looking for!)

With so many talented people involved, you can’t help but feel that Miner’s reboot of Godzilla would’ve been something special, a film most of us horror fans would likely be looking back on today with a whole lot of fondness. Instead, we can only wonder what might have been…