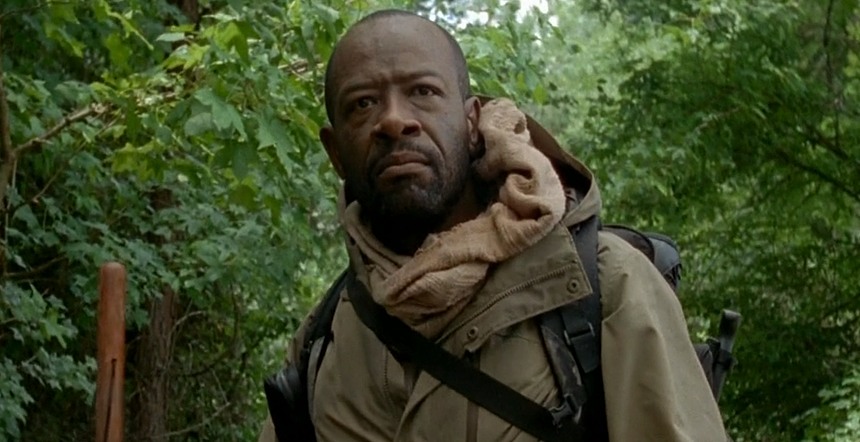 Last night’s episode of The Walking Dead, titled ‘Here’s Not Here,’ was an incredibly polarizing one, the extended 90-minute affair focused entirely on the so-called origin story of benevolent badass Morgan Jones. As we learned, Morgan was at one time a cold-blooded killer like Rick Grimes, but after spending some time with a kind man by the name of Eastman, he evolved into a much more peaceful warrior.

We also learned in the sixth season’s fourth episode that Morgan is keeping one of the Wolves locked up inside of Alexandria, hoping to reform the man in the same way that Eastman did for him – despite the fact that his prisoner unequivocally promised that he’d kill Morgan and everyone else inside the town’s walls. Morgan is convinced that all lives are precious, and thanks to this latest episode, we now know why.

Those who appreciate The Walking Dead‘s slower episodes, and recognize that they’re the most important ones, praised ‘Here’s Not Here’ for its acting and writing, and indeed it was an incredibly solid 90-minutes of storytelling. In the wake of the episode, Morgan has become the fully fleshed out character that he never quite was before, which is guaranteed to work in the show’s favor, going forward.

Despite how different the episode was, there was a distinct air of familiarity to the proceedings, as it played around with a theme that the show is unable to let go of. Several characters, most notably Rick, have struggled with adapting to the apocalypse, torn between retaining their humanity and completely shedding it in favor of doing whatever needs to be done in order to survive and protect their loved ones.

As it stands right now, Rick and Morgan are on the complete opposite ends of that spectrum, and if ‘Here’s Not Here’ accomplished any lasting goal in the world of The Walking Dead, it served as yet another reminder that though both human and inhuman villains are an ever present threat in the world these characters have been forced to adapt to, the show’s overarching villain is, ironically, kindness.

My issue with ‘Here’s Not Here’ certainly wasn’t that it was boring, but rather that I couldn’t help but roll my eyes throughout much of it. As the show has laid out for us time and time again, being compassionate and empathetic toward dangerous strangers is the worst possible way to conduct oneself in that world, and it was frustrating to see yet another character disregarding that obvious fact.

It was because Eastman let Morgan in that the good-natured man ultimately met his end, and furthermore, Eastman’s death was a direct result of Morgan feeling compassion toward the zombified version of a young man he had recently killed. Similarly, Morgan’s new prisoner poses a threat to the entire group, and as we saw last week, his inability to kill several Wolves during the Alexandria invasion nearly cost Rick his life.

Though Morgan is convinced that he’s the hero in all of this, the reality is that his benevolence is actually making him an unlikely villain, putting everyone at risk because he selfishly can’t deal with the fact that bad things need to be done in order to survive. More than anything, watching ‘Here’s Not Here’ felt like watching Morgan learn how to get everyone killed, as his good intentions are sure to be very destructive.

Of course, Morgan isn’t the first character to kill others – and eventually himself, in all likelihood – with kindness. Most recently, Glenn (possibly) lost his own life because he chose to spare a man who had once tried to kill him, and characters like Dale and Reg also died because others were unable to do what needed to be done. Tyreese is another righteous character who refused to make the necessary adaptations.

In many ways this whole season of The Walking Dead has been an affirmation of the fact that you have to be cold-blooded and ruthless in order to survive in the zombie-infested post-apocalypse. Right in line with Rick’s eerie predictions, the peaceful residents of Alexandria are dropping like flies, and there’s a good chance Eastman and Glenn would still be alive if they carried themselves more like Rick and Carol.

As it turns out, Shane was right. And as strange as it might sound, human kindness has proven to be The Walking Dead‘s most dangerous villain. In a world where zombies are rising from their graves and walking the Earth, driven only by the desire for flesh and brains, there’s something deeply terrifying about that realization.