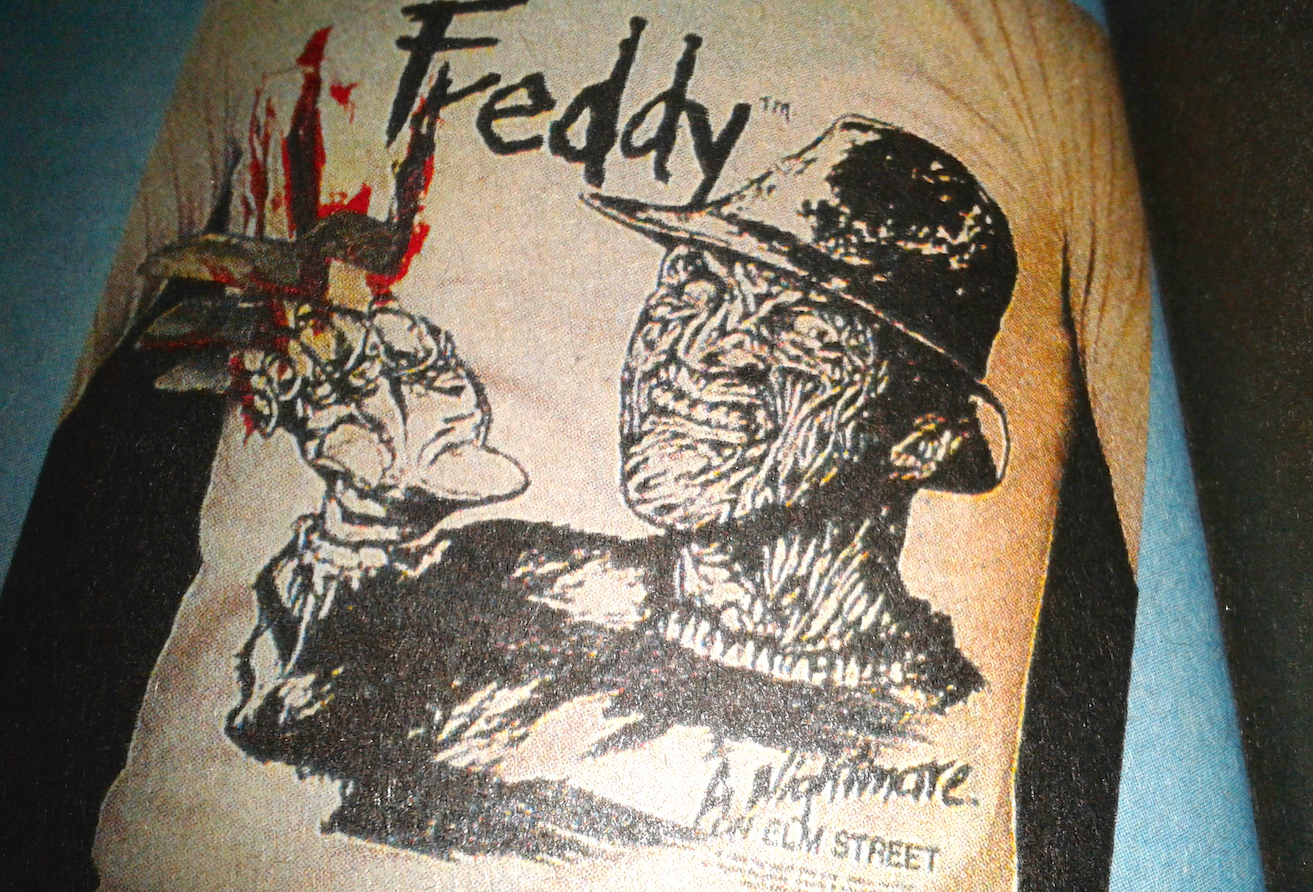 Welcome to my latest look at some classic horror and monster advertising from THE GOOD OLD DAYS!

This week we travel back to the early 90s and dust off some adverts that were found within copies of the UK Aliens and Terminator monthly comic magazine. Each issue featured a warning on the cover confirming it was unsuitable for young children, and that meant they could get away with trying to sell horror merchandise that you wouldn’t normally see advertised in England before the age of the internet.

Come on, it’s time to get nostalgic! 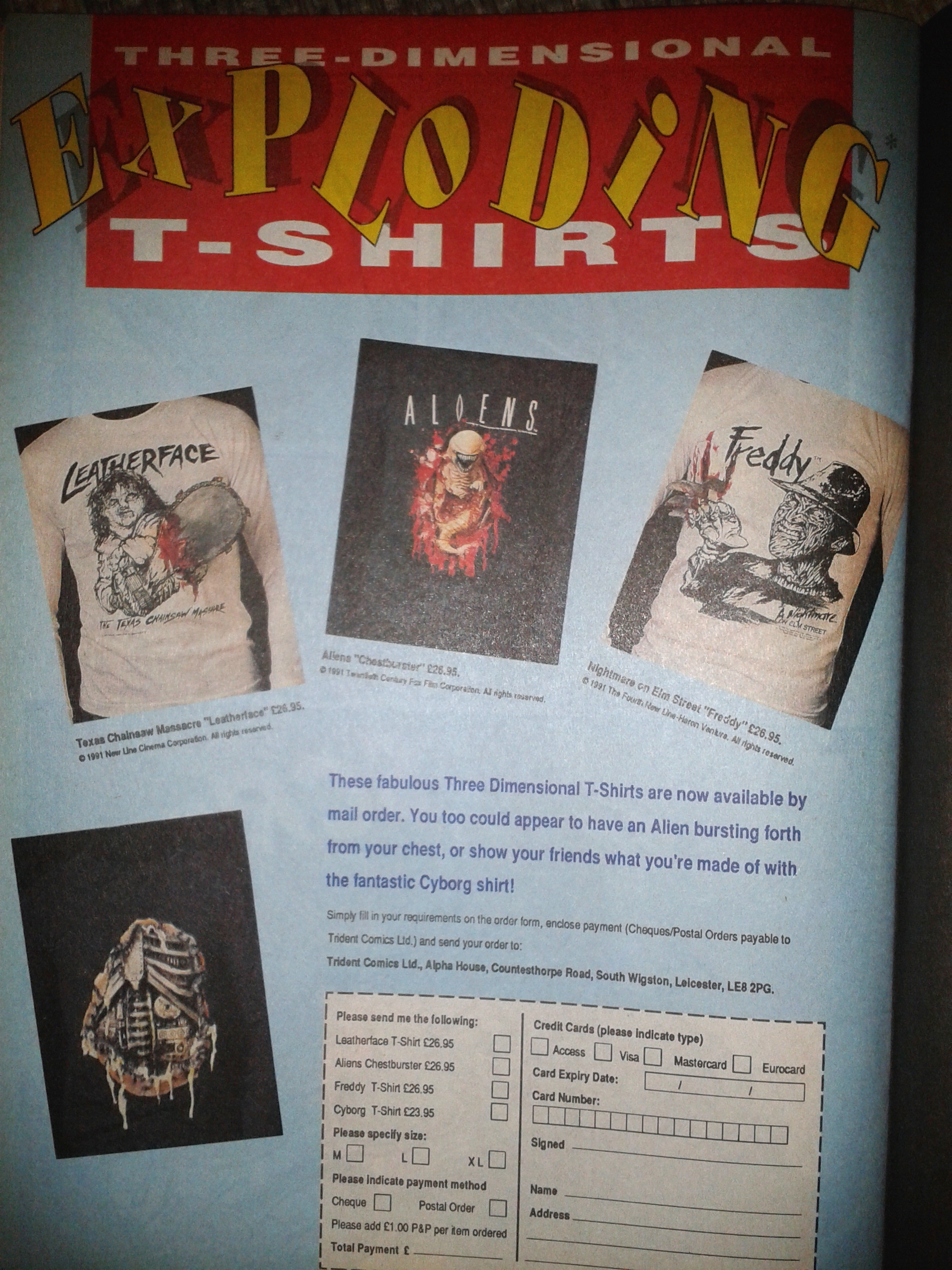 First up we have this advert from the April 1992 issue which wants readers to hand over some hard-earned notes for a Three-Dimensional EXPLODING T-SHIRT!! I remember these things being very popular for a short time during the late 80s, and you won’t be surprised to learn that I actually owned a similar Freddy Krueger shirt which I proudly wore for an entire summer before the rubber blades started to disintegrate after multiple trips through the washing machine!

The shirts listed here were available for £26.95 EACH, which back in 1992 was a fucking serious chunk of cash! According to an inflation calculator I used online, it would work out as roughly £52 in todays money, or $80 across the pond. EIGHTY Dollars for a cheap tee with some rubber hanging off the front!

And just in case you were wondering about safety, the bottom of the Ad reassures readers that “These T-Shirts don’t really explode” … Good to know! 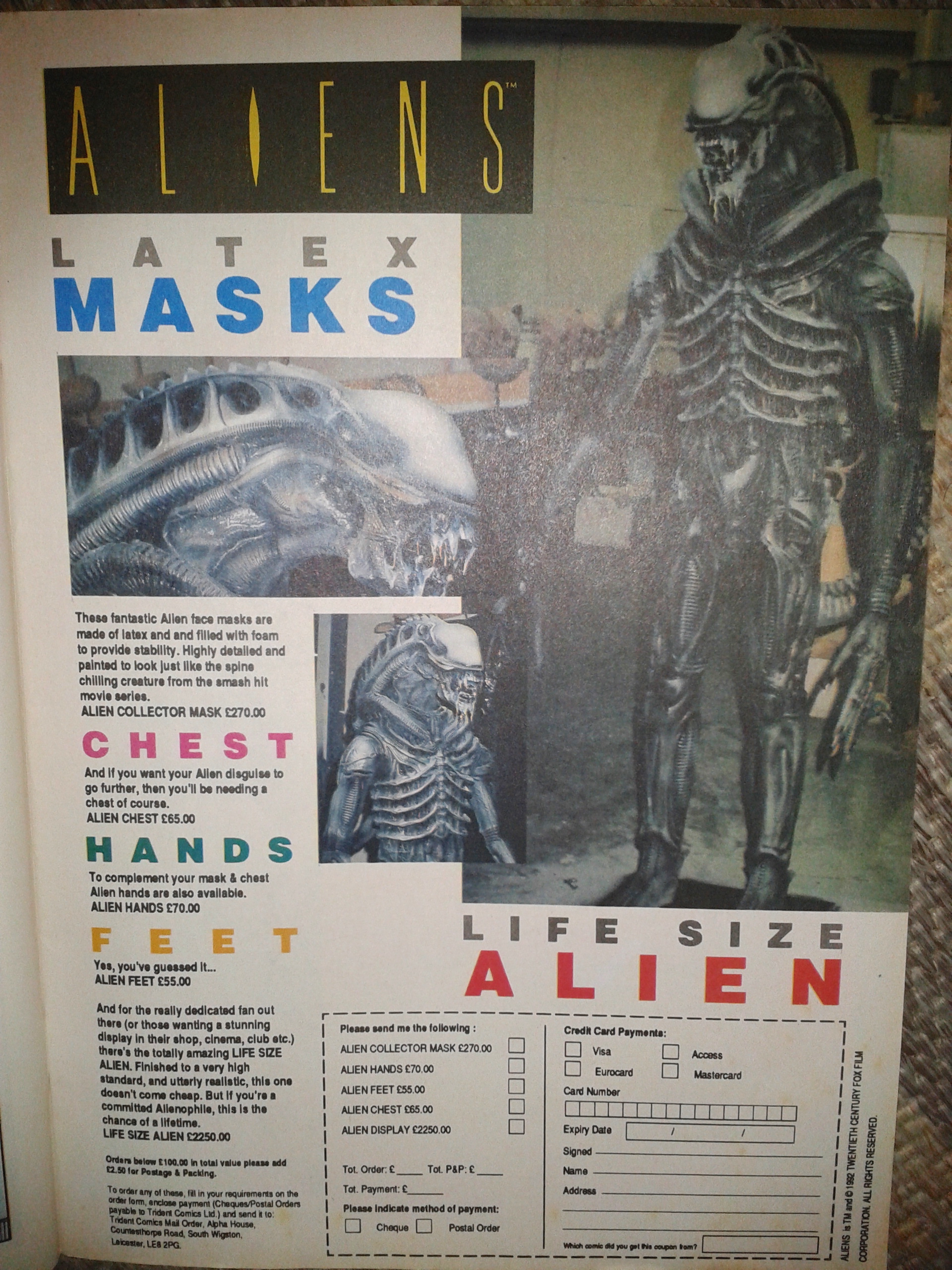 I’ve actually seen one of these “Life Size” Aliens in person, and I can safely say you would have been demanding a refund on your £2250 investment about ten seconds after opening the shipping box. 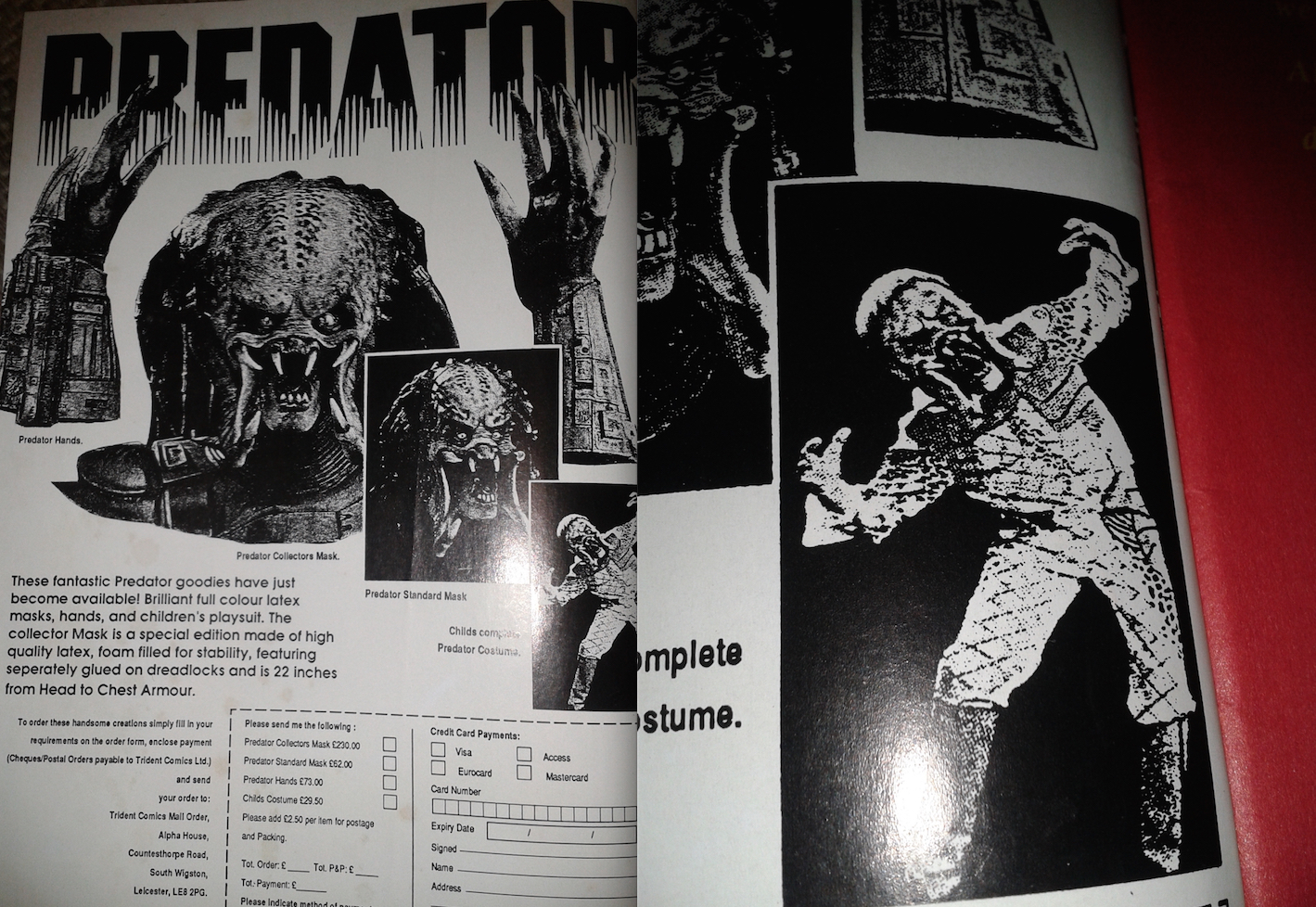 If you were more of a Predator fan back in the 90s then never fear, that very same issue also had an advert trying to tempt you to part with £230 for a “Predator Collectors Mask”. Unfortunately it seems that the color printing budget for that month was emptied by the time they put together this page, so you had to make your purchase decision based on some seriously low quality pictures that look like they were produced by a broken copy machine!

The “Standard Predator Mask” was a modest £62, and if you wanted to recreate the moment our favorite galactic hunter lovingly strokes a skull, then you could buy some “Predator Hands” for £73. Also check out the crazy kids costume! All that little dude needs is a spinal column to swing above his head! 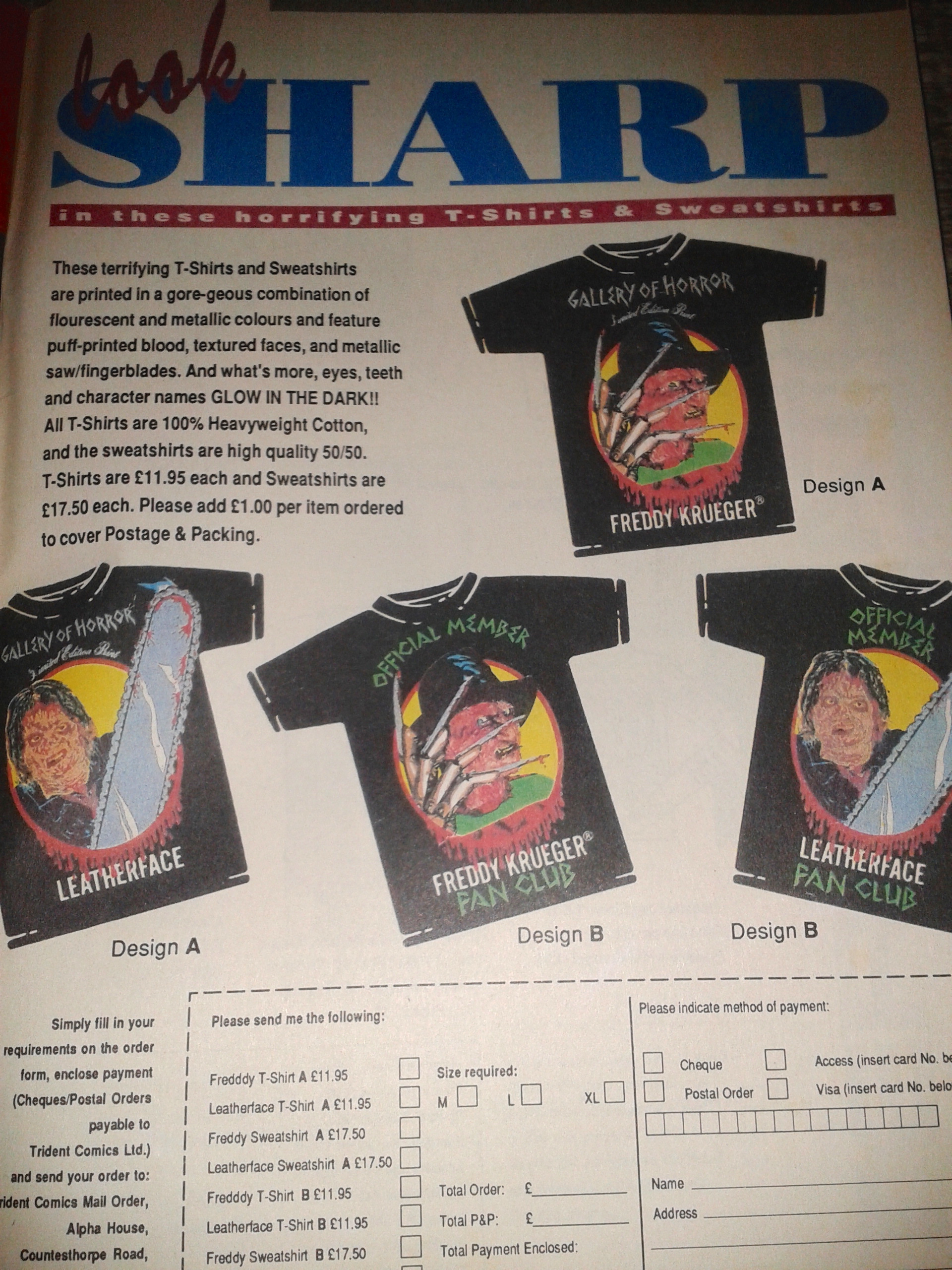 I grimaced when I first saw this advert featuring Freddy and Leatherface clothing. The pictures make them look like shit, BUT the description suggests that MAYBE I’m being harsh, and they just look bad due to some very poor page design work.

“These terrifying T-Shirts and Sweatshirts are printed in a gore-geous combination of fluorescent and metallic colors and feature puff-printed blood, textured faces, and metallic saw/fingerblades. And what’s more, eyes, teeth and character names GLOW IN THE DARK!!”

OK, that sounds fucking awesome! They had me at puff-printed blood! My only remaining concern is that each shirt proudly claims you are now an “Official Member” of either the Freddy Fan Club or the Leatherface Fan Club, but I’m just not sure that’s a promise they can make!

It’s a long shot, but if anyone ever reads this article who happened to buy one of these then PLEASE get in touch. I NEED to know what they were actually like. 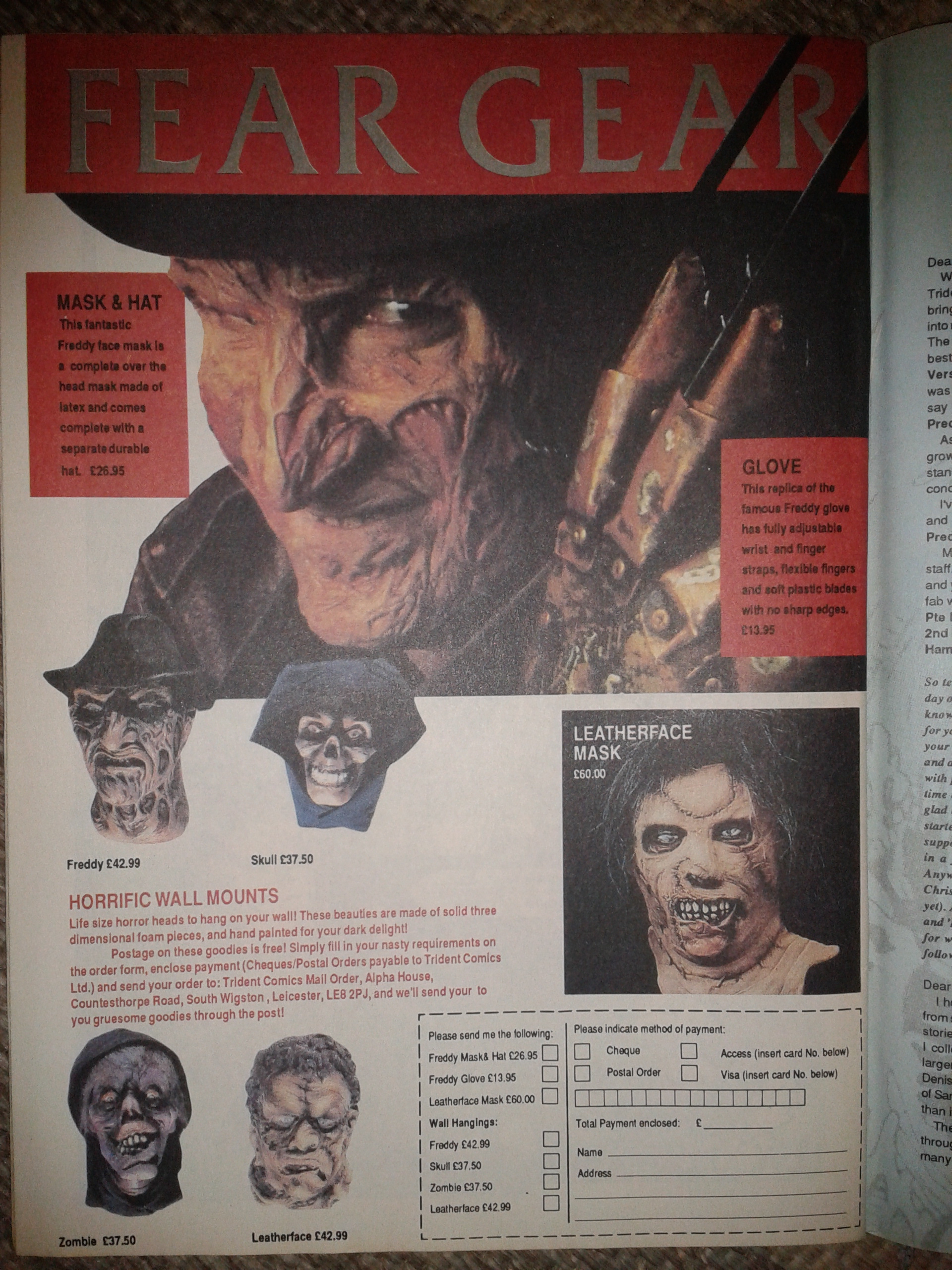 We finish for today with some FEAR GEAR! Which in this case was a few “Horrific Wall Mounts” and two deluxe masks. I’m immediately suspicious of this advert because it appears to be unwilling to show us the Freddy Mask & Hat they desperately want you to buy. Everything else is pictured, but if you wanted to look like Krueger you had to buy blind, because they are only prepared to include a picture from the movie!

It’s likely they didn’t want to show it because it looked like ass, but the wall hangings look ok, so maybe it was just SO awesome it simply couldn’t be photographed. Like Vampires!

Stay tuned for more awesome adverts in the near future …