Long before convention exclusives and store exclusives there were two words that generated excitement in the heart of every young action figure collector – Mail-Away!

The idea of chopping up backing cards to collect tokens, then dropping them into an envelope with a cheque for $5 and THEN watching the mail box for 12 weeks would sound crazy to the youth of today, but that’s how it used to be – and it was worth it, even with the agonizing wait for delivery it was worth it!

Growing up in the 1980s these elusive and mysterious mail-away figures helped to develop two passions within my collectors soul that have never gone away. The first was a love for variants – variations, exclusives and anything that was advertised as being DIFFERENT in a limited way. The second, which I’ll go into a little more detail about (just so you don’t think I’ve gone mad), was a growing obsession for transparent and translucent action figures.

I’ve always blamed Star Wars figures for my slightly worrying ‘clear plastic’ fetish. They would release transparent “hologram” and “ghost” versions of certain characters that were often mail-aways and exclusives, and over the years my brain started to automatically view ANY figure you could see light passing through as a desirable object. Come on! Who doesn’t love a little lump of clear, colored plastic that appears to GLOW when placed next to a window? The vast majority of mail-away figures were actually NOT transparent, but for whatever reason I’ve always associated them with being “hard to get” – and still do.

The ultimate example of these two ingredients coming together actually arrived a few years too late to be truly appreciated by myself at its time of release, and it’s a figure I want to pay tribute to today – The Kenner Ambush Predator mail-away exclusive! 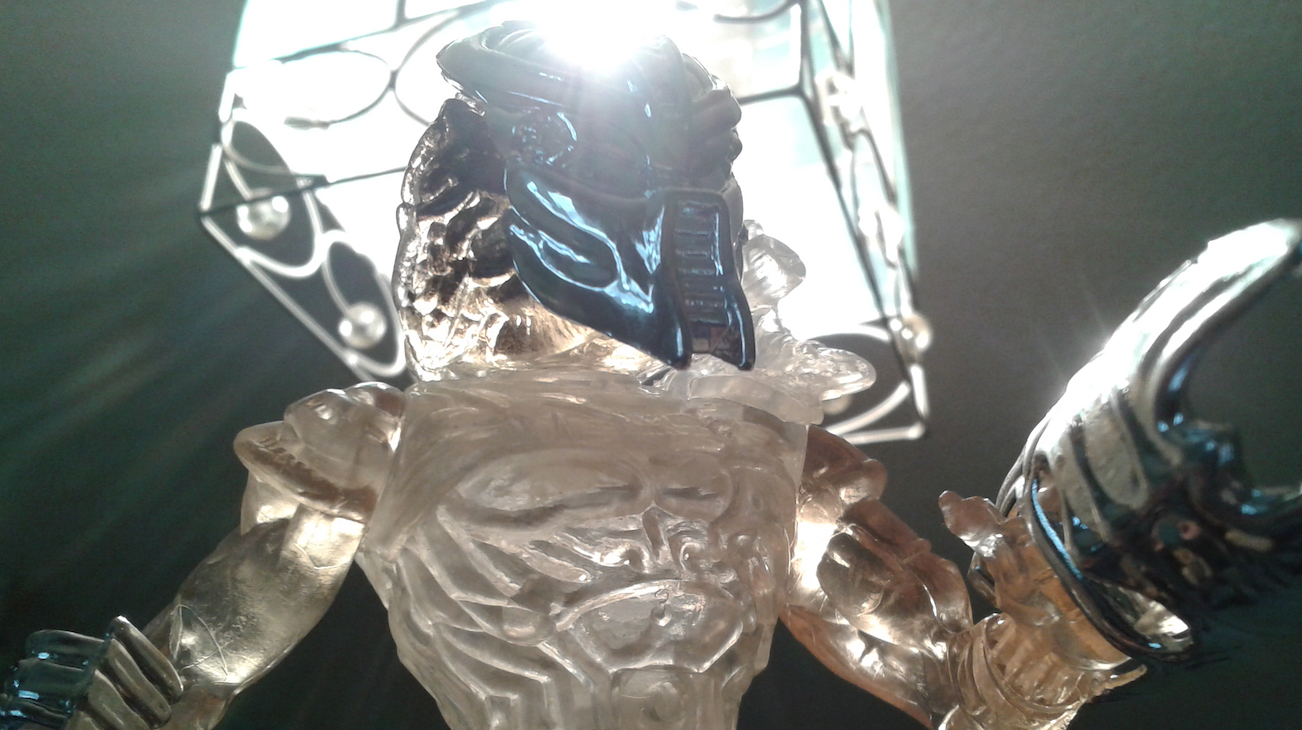 When this was made available in 1993 I was 17 years old and had slowly moved away from collecting toys – and memorabilia in general. I would then spend years admiring it from afar (thanks to the arrival of ebay) but never taking the time to actually purchase it. Finally, last Christmas I got one as a gift from my girlfriend and ALL of my desires for an item like this came flooding back. At last I was the proud owner of my own Ambush Predator.

Anyone who has collected the Aliens and Predator figures that were released by Kenner will know that articulation isn’t a strong point for these things. They are well made and durable toys that can be PLAYED with, but compared to modern toys there isn’t a lot happening. That’s never been an issue for me, I grew up with minimal articulation on most figures so it isn’t a deal breaker at all in my opinion. It stands nicely with a little adjustment, the sculpt is detailed with good proportions, and the small amount of black paint they added to the face really works. It makes the features stand out and the green glowing eyes are the perfect finishing touch. 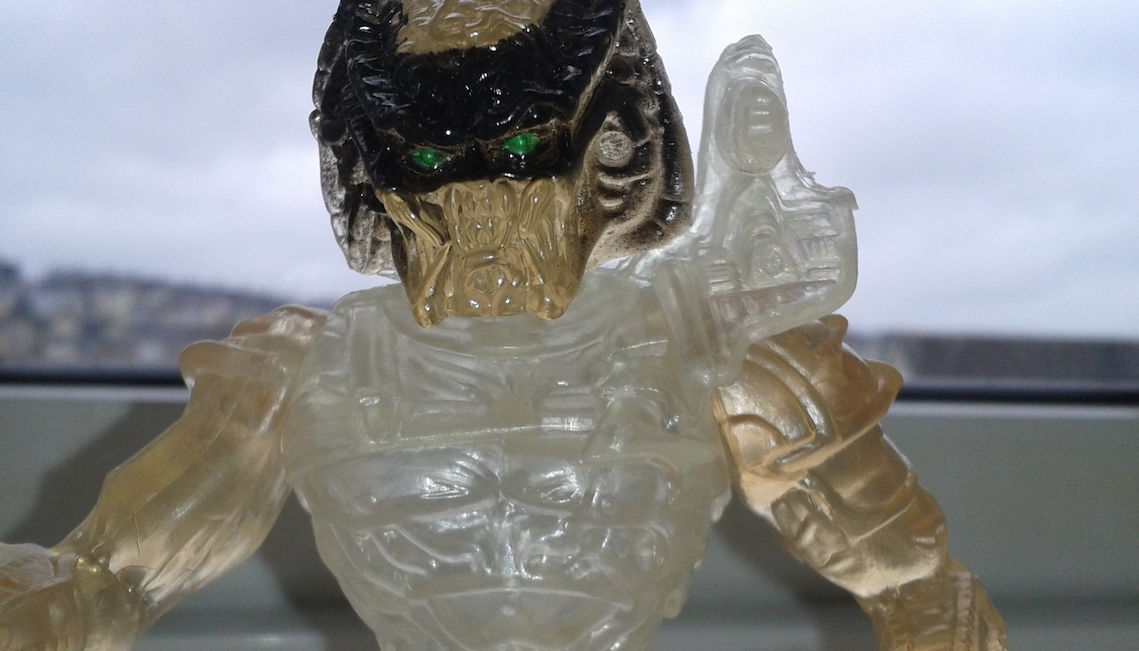 His removable silver mask and arm weapons are VERY cool. The bright silver seems to work well with the transparent figure and complements the “invisible” nature of what this is meant to look like. Hard to explain but hopefully you can see what I mean via the pictures. The black chest plate on the other hand is a very strange accessory and just doesn’t look right at all when it’s attached to the figure. Keep it in the box and let the little guy show off his muscles instead! 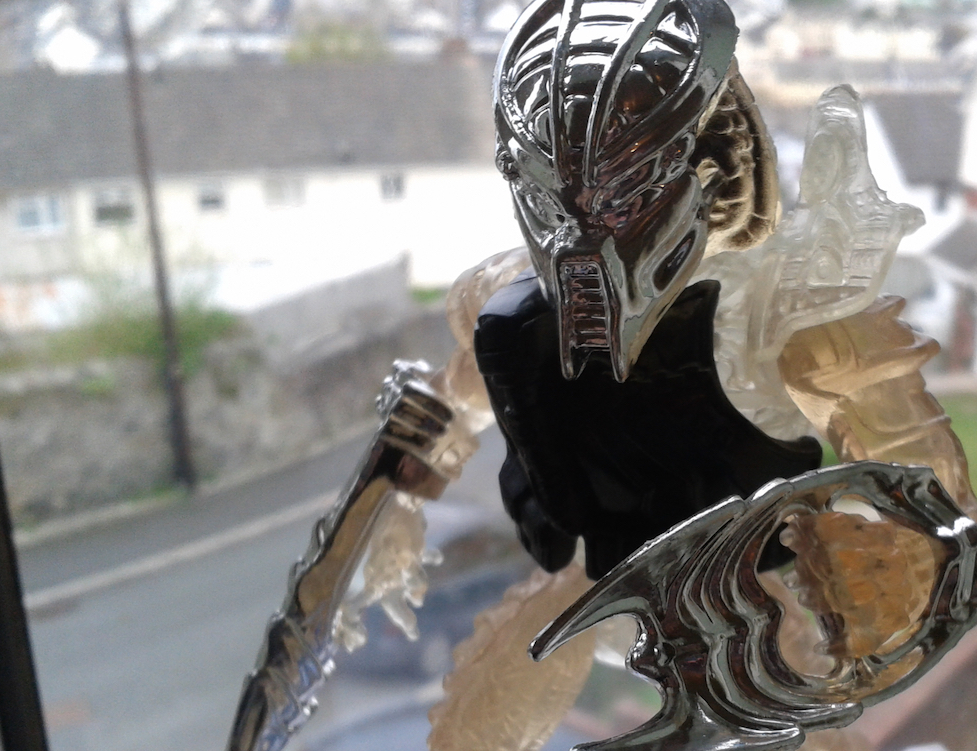 Negatives? – Well, the obvious talking point is the yellowing problem on the arms and legs that most of these figures seem to suffer from. I’ve read many theories over the years regarding this strange phenomenon and I’m not expert enough to give a conclusion here today, but the general opinion seems to be the use of poor quality or badly prepared plastic in the production process. I used to think the problem stemmed from the use of plastic that was more susceptible to air pollution such as smoking, but I’ve seen examples of this figure that have never been removed from their original sealed bags that STILL have limbs that have turned to a “urine” shade of yellow. My figure is a medium shade example – the yellowing is there but is relatively subtle. Some have very dark yellowing while a select few are still clear and white. 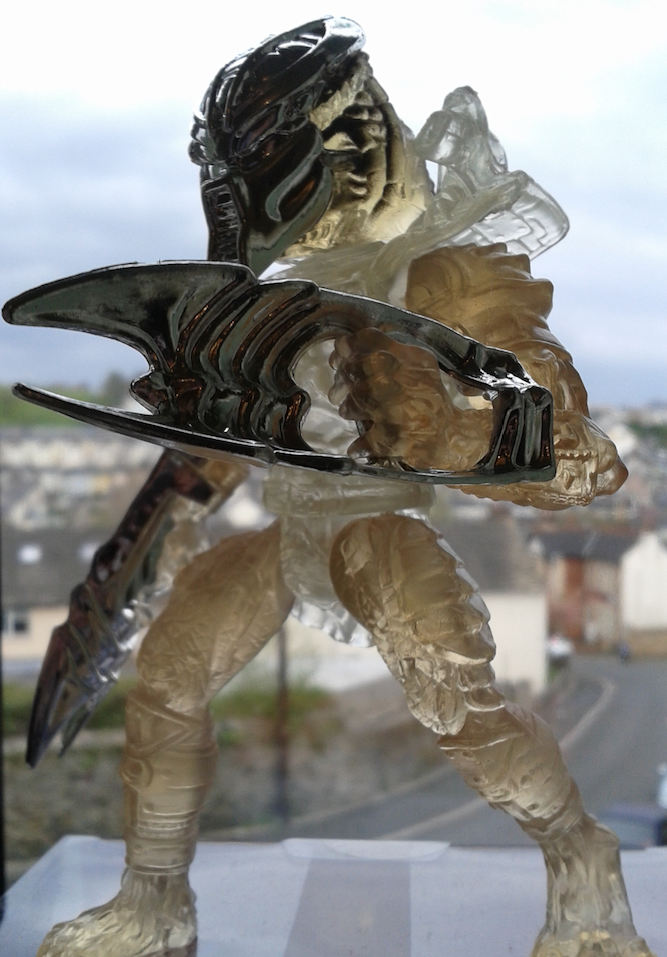 Between you and me, I actually quite like the discoloration, always have. Just don’t tell anyone else, ok?

What you have to remember when it comes to this figure is that it was the first “invisible” Predator ever made. These days there are many action figures out there that are based on Schwarzenegger’s most famous nemesis, and quite often the company producing them will also release clear variations of the figures as well. Time has passed, and toy manufacturing has progressed to staggering new heights, but at the end of the day there is still only one way to portray a Predator with his cloaking device activated – mould him using clear plastic!

My personal history with this figure came full circle when I finally got one, but while I was putting this article together a new twist in the story arrived in the form of an announcement from NECA that they are releasing an updated version of the Ambush Predator this year! It’s going to be a convention exclusive (of course), and looking at the pictures of it that were revealed by Action Figure Insider, they have gone to great lengths to make this something that fans of the original Kenner version will love. 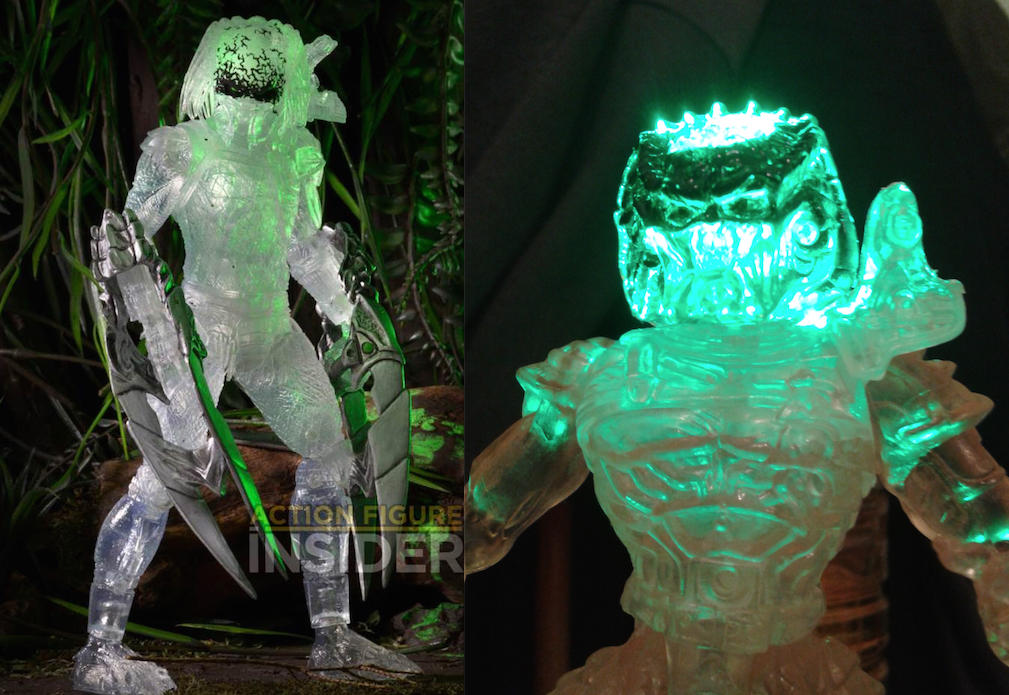 Ironically, living in the UK means I will almost certainly have to wait for one of these things to arrive in the mail if I ever decide to own it.

I’m older, taller and hopefully a little wiser – but I’ll still be just as excited waiting for the knock on the door. It’s like the 1980s all over again, just with less backing card mutilation and more articulation!