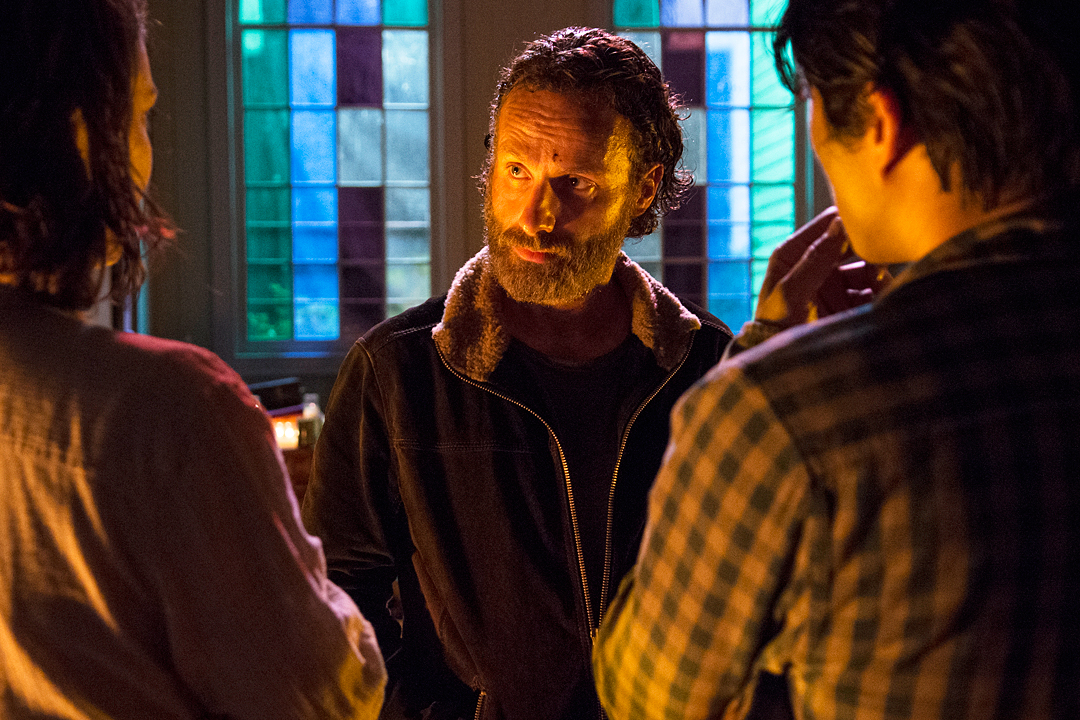 If there’s any major change from the first half of Walking Dead‘s fourth season and the first half of its fifth season, it’s that Rick Grimes has gone from pacifist to Punisher, fully embracing his badass side and committed to doing whatever needs to be done to protect his family.

Just as Grimes’ balls are bigger than ever in Season 5, so too are The Walking Dead‘s, the show pulling absolutely no punches in its quest to make this season one of the best in its history. And it’s off to a damn good start, just three episodes in.

Here’s your weekly rundown of five notable things that happened in The Walking Dead‘s latest episode, titled ‘Four Walls and a Roof’!

In last week’s episode, Bob was acting pretty strange after returning from the food bank, where we saw that he was attacked by a water-logged walker. Requesting a kiss from girlfriend Sasha and then heading outside to cry his eyes out, it seemed that Bob was likely bitten during the scuffle, though it was impossible to be sure.

Wasting no time, last night’s episode answered last week’s lingering question right off the bat, Bob revealing to Gareth and his surviving Terminus buddies that he was indeed bitten, thereby making his leg meat tainted. Naturally, the bad guys recoiled with fear at the twist ending to their meal, while Bob laughed maniacally – echoing a scene with Dale from the comics.

We also learned in the episode’s utterly satisfying ‘instant karma’ opening that women taste better than men, though I think we all already knew that.

Another question that last week’s episode left us with was in regards to new character Gabriel, who was clearly hiding some sinister event from the recent past. Confronted by a hot-headed Rick, Gabriel finally spilled the beans, as he was pretty much left with no choice but to do so.

According to Gabriel, members of his congregation tried to get into the church shortly after the world went to shit, begging him to let them in. Men, women, children and entire families clawed at the doors and screamed for help, and Gabriel did nothing to save them. He kept the doors locked as zombies tore the congregation apart, which sounds to me like a scene that we should probably be shown a flashback of at some point.

Likely because he somewhat atoned for his previous sins by providing a sanctuary for Rick and the gang, they all seemed to forgive Gabriel, brushing his horrific past under the rug. Besides, more pressing issues were at hand, as a one-legged Bob was dropped off at the church.

Their whereabouts revealed by Bob, Rick and his troops formulated a plan to attack the Terminus folks under the cover of night, having no idea that Gareth had the exact same plan. With Rick and a handful of his troops out in the woods, Gareth and his cannibals attacked the church, where several of our leader-less heroes were hiding out.

GPS Judith let out a cry that gave up their hiding spot, and just as Gareth and his men were about to turn the church into a bloody massacre, Rick, Abraham and the others showed up and quickly turned the tables. The church walls did indeed get decorated with bullet holes and a whole lot of blood, though it was the blood of the cannibals that served as the fresh coat of paint.

Making good on his promise from Season 5’s premiere episode, Rick disemboweled a begging Gareth with a machete, repeatedly hacking into his body and reducing him to a pulpy mess. Everything happened so fast that it was hard to tell who killed who, but all that really mattered was that our heroes prevailed, and butchered every last surviving member of Terminus – oh, and Michonne got her sword back.

I’m willing to bet I’m not alone in thinking that Gareth was going to be the lead villain of Season 5, and the fact that he’s already dead is proof positive that this season isn’t messing around. Though The Walking Dead has in the past had a tendency to drag storylines out, it seems they’re going right for the jugular this time around, wasting no time getting to the good stuff.

4) TYREESE PUT BOB OUT OF HIS MISERY

After sharing tender moments with Sasha and Rick, Bob was on the cusp of making the change from human to crawler, and Sasha was armed and ready to stick her knife into her lover’s brain and prevent the transformation from happening. Stepping up to the plate, Tyreese took the knife from his sister and performed the dirty deed, plunging it into Bob’s temple.

Not only did the scene mark the end of Bob but also the beginning of Tyreese’s growth as a character, as he’s finally come to terms with the fact that some nasty shit simply needs to be done, in order to survive in the post-apocalypse. Then again, we all thought he turned that corner when he seemed to have killed the dude from Terminus, so who knows with Tyreese.

Hell, for all we know, Tyreese didn’t even stick that knife as far into Bob’s brain as he needed to, as again we didn’t exactly see the full act. Rather than stabbing Bob in the head, he seemed to just kind of gently ease the knife in, so I can’t help but wonder if Tyreese once again failed to deliver the fatal blow that he needed to deliver.

Here’s to hoping Tyreese soon becomes the badass we all know he is deep down, and stops being a big ole teddy bear.

Early on in the episode, Abraham insisted on leaving for DC rather than bothering to exact revenge on the Terminus gang, though Glenn was able to talk him out of it. Glenn and Maggie agreed to road trip to Washington with Abraham’s crew if Abraham agreed to stick around and help them kill Gareth and company, and all of those promises were kept.

At the end of the episode, Glenn and Maggie joined Abraham and friends and headed to DC, using a fixed up church bus as their means of transportation. Rick and the rest of the group stayed behind to wait for Daryl and Carol to rejoin them, promising that they’d depart for Washington when they returned.

After some rustling was heard in the woods, Daryl emerged without Carol, and he ominously told an unseen person to come out of the woods as the episode came to a close.

Next week: Who was Daryl talking to? Where the hell is Carol? And WHO TOOK BETH?!