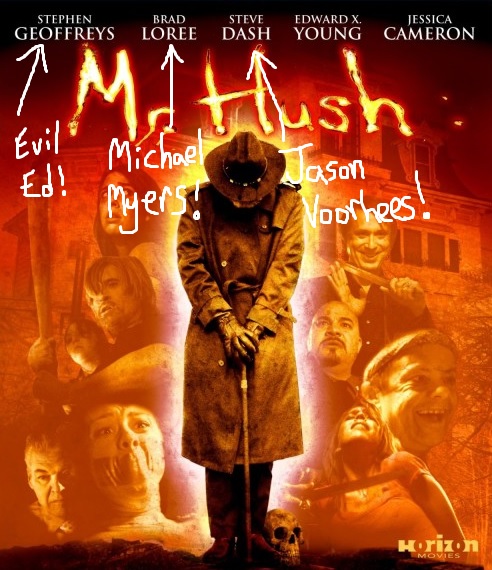 I’ve been attending horror conventions for nearly a decade now and one of my most memorable con experiences was at Monster Mania a few years back, when I met Stu Charno.

Stu played loveable goofball Ted in Friday the 13th: Part 2, and though I initially just wanted to say hi and grab a quick autograph, the encounter ended up taking a turn for the totally surreal when he invited my wife and I to sit at his table with him, and pound back Blue Moons.

Yes. I got drunk with Ted from Friday: Part 2 – the only character in the history of slasher cinema that survived because of his taste for alcohol, rather than died because of it. A high point in my life as a horror fan, to say the least.

Now the reason I bring this up today is because of something Stu said to me, while we were chatting and enjoying our adult beverages. I asked him what he had going on at the time, in terms of his career, and he essentially told me that he gets regular offers from fans to appear in their horror movies, but that he knows he’s only being offered the roles because he was in a Friday the 13th movie.

I was surprised by how honest and open he was being, when he said that, and he seemed kind of bummed by the thought that he’s only in demand as an actor because his is a name that horror fans recognize and are at least somewhat familiar with.

It’s called stunt casting, and it’s become so rampant within the horror genre that nearly every newly released indie film has at least one name attached to it – oftentimes several of them. I can’t tell you how many press releases I read on a weekly basis that throw names like Bill Moseley, Tony Todd and Linnea Quigley around, in order to pique the interest of horror fans, and though I love to see talented actors like them getting a whole lot of work, I can’t help but be bummed out by this growing trend – the same way that Stu Charno seemed to be, when I discussed this topic with him.

The real problem here is that far too many filmmakers are relying on stunt casting to get people to see their movies, rather than actually trying to make good movies that can stand up on their own two feet. And in doing so, they’re actually doing a disservice to the horror icons that they love so much; instead of writing good roles for them and helping to take their careers to the next level, all they’re really doing is tarnishing their legendary names, by taking advantage of the fact that they need work and will likely come on board any project that promises a paycheck. Just look up names like Bill Moseley, Tony Todd and Kane Hodder on IMDb, and you’ll see what I mean.

Now again, I want to make it clear that I’m a big fan of all of the actors I’ve mentioned thus far, and I think they’re all incredibly talented. But I always feel a little sad when I see their names exploited time and time again, slapped on countless DVD covers for the sole purpose of compelling their fans to rent shitty movies that were made with little care or effort. True, those filmmakers are providing these guys with steady work, which is awesome, but wouldn’t it be nice if fans tried harder to write good roles for their favorite genre icons, rather than shoe-horning them into their movies to make a quick buck?

I know Rob Zombie gets criticized a lot for putting the same people in all of his movies, but if you’re asking me, Zombie’s one of the few filmmakers who has actually provided roles for horror icons that have helped their careers, rather than hurt them. Bill Moseley, Sid Haig, Ken Foree and Michael Berryman all come to mind, and roles like Captain Spaulding and Otis Driftfood show that Zombie actually cares about his movies and the actors. He’s not just putting these guys in his movies to draw fans in, but rather he’s giving them roles that are tailor made for them, and which really allow them to shine as actors.

Unfortunately, for every Chop Top and Otis Driftwood, there are 100 roles for an incredibly talented guy like Bill Moseley that totally squander his talents.

Adam Green is another filmmaker who’s doing it right, and with his Hatchet franchise he’s given actors like Kane Hodder, Tony Todd and Danielle Harris career resurgences, thanks to roles that are some of the best that have ever been written for them. You can criticize Green and Zombie for their stunt casting all you want, but what they’re doing doesn’t really fit the definition of the term, since they’re inserting certain people into certain roles for the good of the movies and the actors, rather than for the sole purpose of getting people to see their movies.

So to all the aspiring horror filmmakers out there, who want to work with the icons that they grew up watching, I ask you to please write good roles for them, rather than merely hire them so you can put their names into press releases and onto DVD covers. And most importantly, I ask you to get us all to see your movies because they’re good… not because of who’s in them.