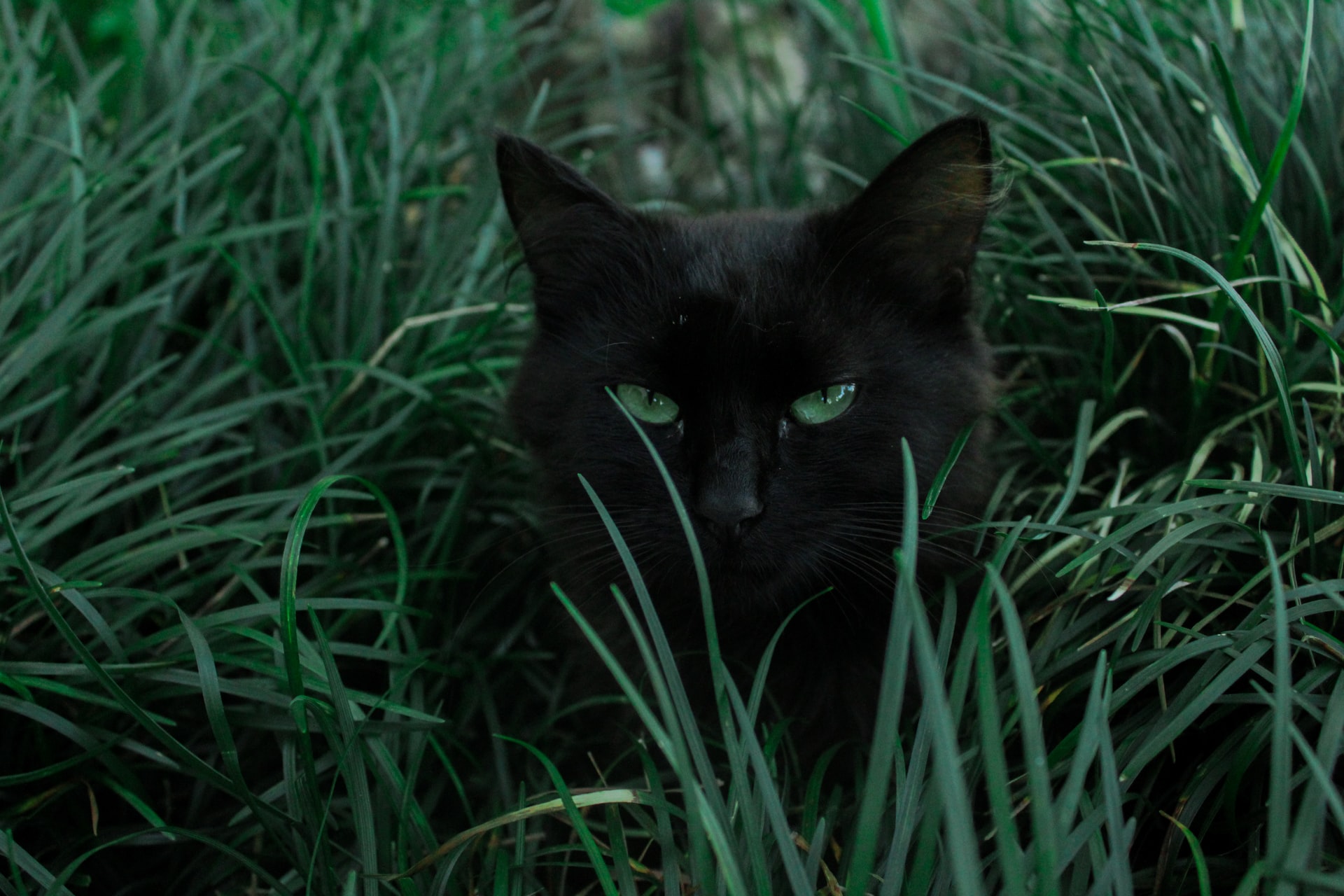 The legends of black cats living in and around the Piney Woods region of East Texas and Central Texas Hill Country have been told for generations. My stepfather, who would often take us boating in a lake outside of Tyler, was the first person to tell me of the cats when I was around 6-years-old. He told me to watch the shores as we fished, saying sometimes the big black cats would come out of the trees and on to the lake for a drink, to cool off in the water, or to catch a fish of their own. I thought this was legitimate for at least 10 years after I first heard the stories from him, always in love with the thought of a huge black cat cooling itself off with a swim by our boat as we drifted around the lake.

Panthers play a variety of different roles in Native American lore. In some Western tribes, seeing a panther or hearing its call is an evil omen. In some Eastern tribes panthers are considered noble animals with powerful hunting luck and blessings for medicine. Among the Pueblo tribes, the Mountain Lion is one of the six directional guardians, representing the north and the color yellow. In South America, panthers were associated with wealth and good earth, and many Quechuas still consider it lucky to catch sight of a panther today.

During my research, I found Large Black Cat reports in the East Texas area dating back to the 1790s. The early reports documented by Spanish Missionaries, who received warnings about big cats from the native inhabitants of the woods, speak of an ear-piercing female shriek followed closely by a sighting of a large black beast with a long tail, slinking away into the trees.

The stories and first hand sightings continued so strongly into modern times that the Texas Parks and Wildlife Department have issued an official statement that “Black Panthers or other similar-sized large black cats do not exist…” in the Lone Star State. Those who have spotted something large, dark, sleek, and strange are told by TPWD that they’ve most likely misidentified a black hog, large feral house cat, or even an otter. 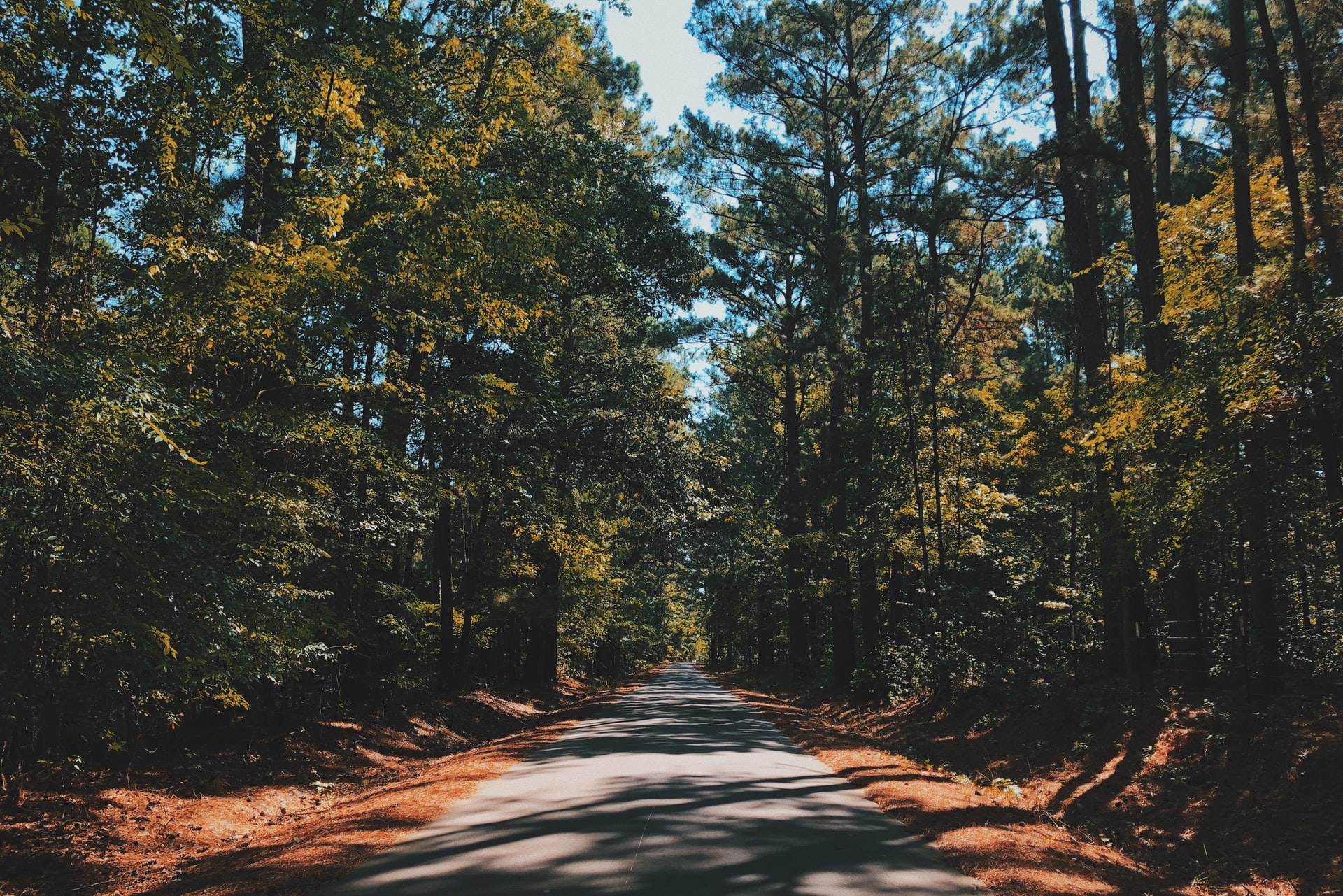 Missing pets or livestock being found disemboweled and hanging high in a tree have also been reported, perpetuating the beliefs of Texans that a predatory cat of some sort must reside in the Piney Woods region. Some people even still report the piercing cries found in the reports from over 200 years ago the night before their animal goes missing.

It’s reported that in Civil War times, East Texas families would bar and shutter their windows at night in an effort to keep out large black cats, despite the hot and humid air of the region. I found one report that states over the course of the late 1800s, there were a number of articles printed in regional newspapers with respect to “panther” attacks, including some victims who were said to be eaten!

Before the population boom in the area around World War II, East Texas was mostly enormous fields of cane, muck, and marsh grass. From the early 1900s through the 1930s I found reports of locals in the area that said during some parts of the year, always around dusk, large black cats would emerge from the marshlands and head towards the higher ground of the hill country, most likely in search of a meal.

In modern times, the reports continue. I found a Waco Tribune newspaper article from 2013 that says police and animal control officers have set traps in following reports of “black mountain lions” roaming an area neighborhood.

“Two women- Julie and her daughter Sarah, are among those who have kept Waco police and animal control officers aware of their sightings since claiming they first saw the family of four black mountain lions… around September.“

Another account from the same paper regarding a different area in East Texas says:

“Cora Bickly, of China Spring, also is sure about what she saw. She snapped a dark, blurry picture of what she said was a black cougar in August near Childress Creek. Like Julie and Sarah, she described it as big and black, with lime green eyes and a long tail. This big cat had a baby with her, which hid in the woods as Bickly took the picture.“

Later in the article a zookeeper says he “…is not sure why the city used fish guts as bait to try to catch the big cats. A live chicken that would make noise to attract the cats would have been more effective.” This made me chuckle.

My significant other’s uncle tells of his own personal sighting. In the late 1970s, a teenage Uncle Tracy was walking his family’s land in Autumn at dusk, as he likes to do even to this day. Off to the forested side of his property, he heard quite a bit of rustling and commotion as some birds took flight from their spot near the edge where the trees meet the tall grasses. As he focused his eyes in the direction of the noises he saw what was unmistakably a large slinking black panther, bobbing in and out of the treeline, ducking as it entered the tall blonde grass, between Tracy and the forest, then jogging back into the trees, as if it was hunting something.

Uncle Tracy was a little taken aback by what he had just seen, but not in complete disbelief. As many other Texans have, he had grown up with stories of large predatory black cats in and around the family land. He decided to head back to the house after the sighting, just in case the hunter missed catching its prey and decided Tracy looked like an easy catch. Since that sighting at dusk, he’s caught glimpses of something big and black moving through the grass from time to time, as well as had neighbors find feral hogs disemboweled in the forest adjoining their properties. 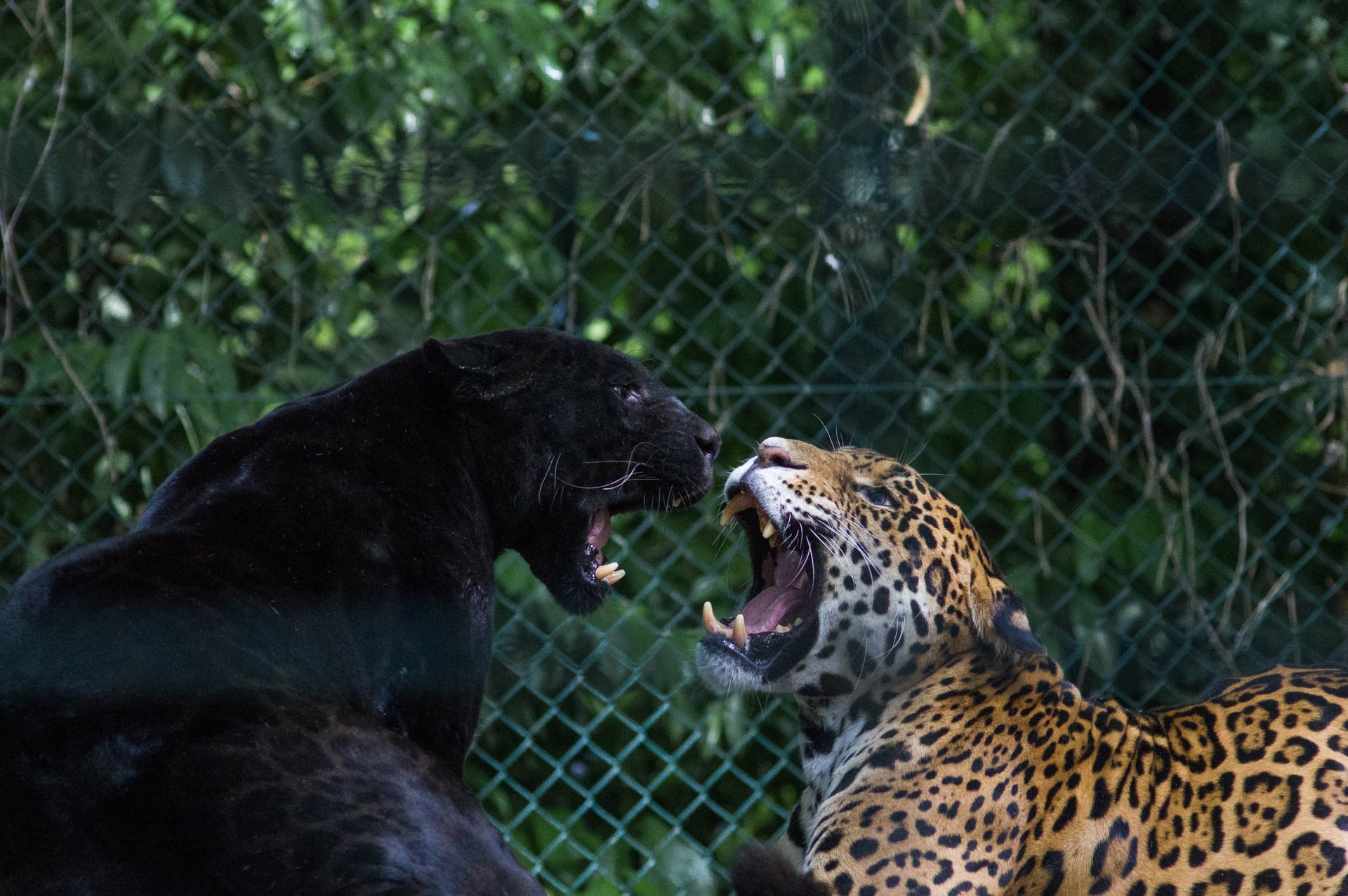 Jaguars, whose primary habitat is located from the Southwest U.S. down to Northern South America, and Mountain Lions, who live from the Canadian Yukon to the Southern Andes, might be spreading out as their habitats become threatened by human sprawl and deforestation. Maybe Melanistic Cats are more likely to be part of the population on the move- due to their mutation making it harder for them to hunt and hide. If these cats breed with other melanistics, the chance of their offspring also carrying the mutation increases.

Typically, a Jaguarundi only reaches a weight of about 20 pounds in adulthood, but they have very long tails. If a dark-colored Jaguarundi was a little larger than typical, could their tail length combined with the slinking movement of their short, powerful legs create an optical illusion? These wild cats, who are native to South America all the way up to Texas, can appear much larger than they really are, especially at a distance.

In the mid-1980s, several jaguarundis were relocated from a game-hunting ranch in south Texas where the cats were disruptive to the large white-tail deer and quail that the game ranch stocked for their customers. Since the jaguarundis were a protected species, they were trapped and moved north instead of just added to the list of available animals to hunt.

Some Say it Could be Actual Black Leopards

Who reproduced after escaping or being released by people who kept these wild animals, native to tropical rainforests of Southeast Asia and India. It is (and I am pretty sure has always been) legal to own exotic pets in the state of Texas. In the 1930s and also during the 1970s there was a huge surge of popularity in keeping wild animals as pets in East Texas and the Hill Country.

Small “zoos” dotted the landscape, run by big cat enthusiasts wanting to share their love, and greedy opportunistic land owners looking to make a quick dollar off of road-tripping families and curious locals. I would imagine once the owners found out they were unable to properly keep the large cats, or if the owners passed away and their next of kin had no desire to keep exotic pets, the animals would just be let go to wander off into the trees and fend for themselves.

During the brief period of time in early 2019, I spent time living on land about 30 miles south of Tyler. I regularly saw country folk driving out on the dirt roads near my house, and tossing their dog out into the trees and speeding off, as well as packs of mutt strays roaming all over the forests and fields, presumably after generations of being dumped and meeting up to mate. I don’t see why this couldn’t also be the case with Black Leopards.

Is that these cats are an undiscovered or unconfirmed species whose numbers are so small and whose human avoidance skills are so great, that biologists simply cannot recognize them until somebody delivers a body, dead or alive, which as you’ll see with the Kellas Cat (whose story is below), is entirely possible. 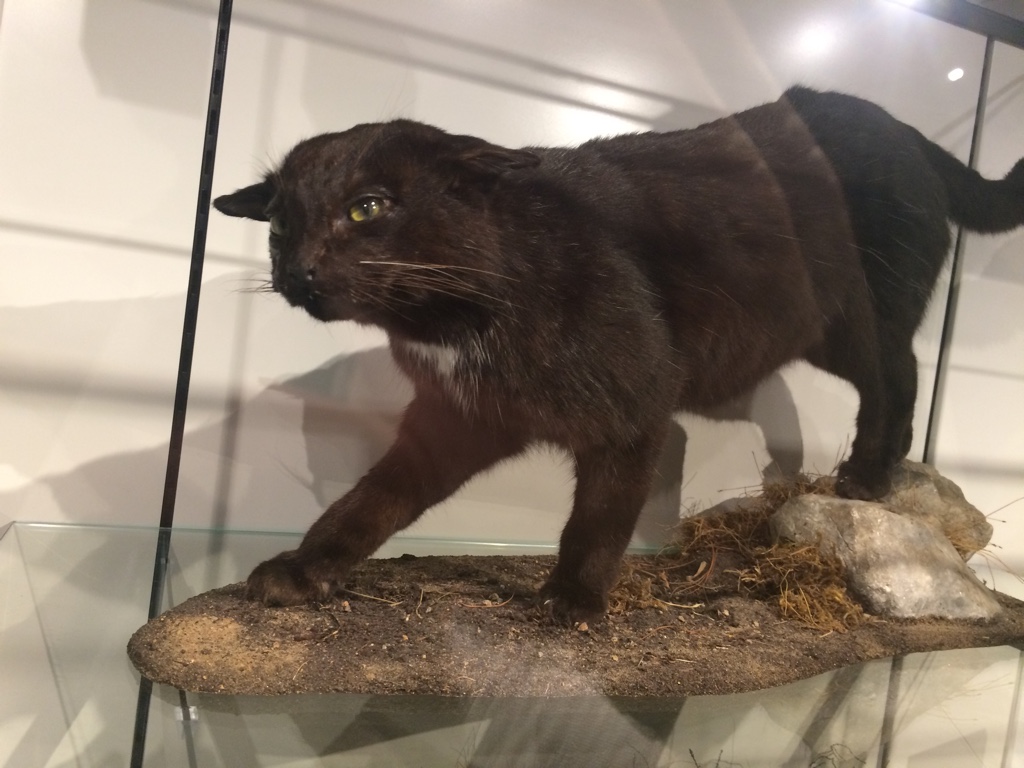 Similar Cryptids and Critters from Around the World

Is a small black feline found in Scotland. Once thought to be a mythological creature, with its few sightings across the ages dismissed as hoaxes, a specimen was shot and killed in 1984. It was found to be a hybrid between wild Felis Silvestris and feral domestic Felis Catus (AKA a very big black cross between the European Wildcat and a house cat). The specimen was named after the village of Kellas, Moray, Scotland, where it was first known to be shot and killed. It is 25 inches from nose to butt, with long hind-legs and a tail about 12 inches long. A taxidermied specimen is kept in a museum in Elgin, Scotland.

Is a legendary big cat that has been reported by residents of the Blue Mountains area, west of Sydney, New South Wales, Australia, for over a century. Blurry photographs and first-hand accounts are still being submitted as proof of this creature’s existence to this day.

Is described by locals as a panther-like creature, spotted around England since 2008. It has been reported attacking dogs in yards and is blamed for several missing house cats. It has been investigated by the British Big Cats Society, who stated “It could be a panther.” Warnings were issued to local residents in 2008, just in case an actual unreported escaped exotic big black cat was on the loose.

Is a creature that has been reportedly spotted among the trees in New Zealand. This creature appeared fully black, but was not seeming to be a solid, like a dense, black large-cat-shaped, mist. It is said to be very stealthy and can disappear right in front of your eyes after it is sighted, like an apparition. Shadow Panther is reported as being 10 feet long from nose to tail which is 5x the length of the average house cat!

Also known as the “ghost cat,” is a creature that has been reported in India. In 2010, a resident reported a feline cryptid ate forty-five pigeons and one goat from his property across 10 nights. The sightings of the creature have been mostly reported in the area of Pune, India, which is across the country- about 1,250 miles- from where any big cats’ natural habitat would be in the country.

What Do You Think?

Do you have large black cat sightings in your region? Do you think the people reporting such creatures are full of bologna? As always dear reader, I’d love to know what you think!

Reach out to me on Twitter and let me know!