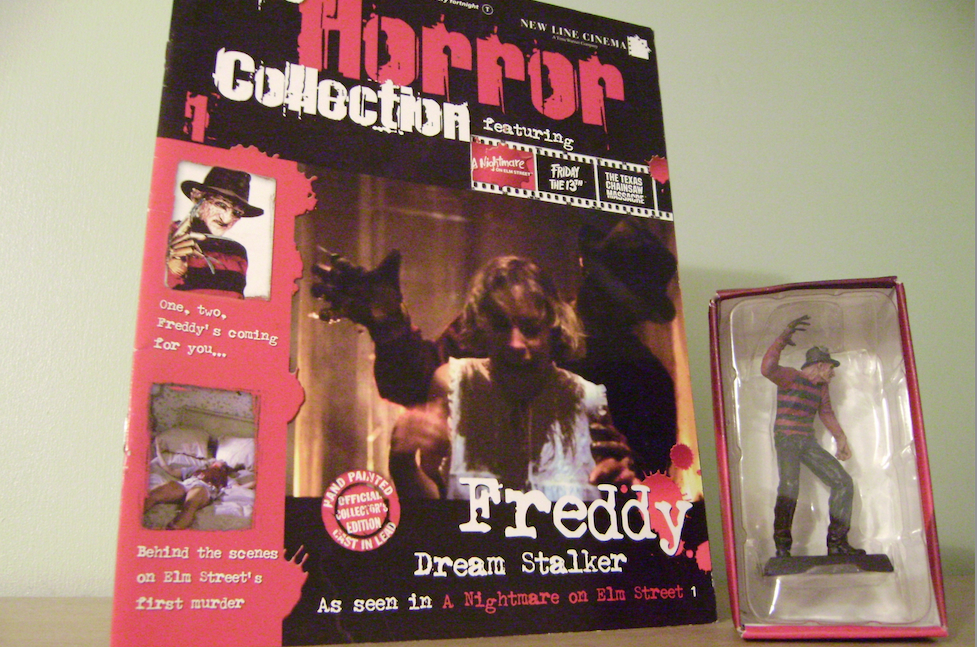 Eaglemoss are a European publishing company who specialise in what they call ‘Partworks’ … In their own words a Partwork is:

“A finite number of magazines and cover-mounted collectables. Unlike traditional magazines, they don’t carry advertising and are designed to build into a single “work”.

Recent examples of such magazines are the VERY popular Batman Automobilia collection that is still going strong and various Marvel / DC collections that normally feature figurines or character chess pieces. Basically they are targeted at collectors of all ages and nearly always feature popular characters and subjects that are very mainstream. Some consistently sell in huge numbers while others start strongly then fade over time, at which point they are swiftly cancelled and any collection you were building will remain unfinished for all eternity … (I’ve been there and yes, I’m bitter!)

SO, back to 2007 … What I had found was the first issue of a Partwork based on Horror movies! Every issue would focus on one classic film and include a hand painted, horror icon lead figure … Seriously, this was the stuff daydreams are made of!!

In this article, and Part 2, I will guide you through the issues that I owned, give you insight into the contents of the magazines and tell you about the figures. I’ll also give you my opinion on why this was ultimately an ultra cool BUT doomed venture from the very start.

It all began with a natural choice … The original A Nightmare On Elm Street was the focus of issue 1 and the very first page gave us a look at Krueger’s big screen introduction and the dream sequence involving Tina. Then a page was dedicated to a close look at the free figure followed by several pages that really went into detail about Freddy’s history, motives and creation. The centre pages concentrated on Tina’s legendary death scene and then Wes Craven was put under the spotlight as they looked into his career and early life. It finished with an interesting article about lucid dreaming and recurring nightmares.

Cover to cover the magazine was only 20 pages long but it was big, colorful, glossy and confident. The REAL star of the show however was the figure.

The first thing you notice is how heavy it is, very solid. It came in a nice little cardboard display box that was blood red and featured the silhouette of the character contained within on the side. Considering its size (Only about 3 inches tall) the sculpting was excellent and the paint job was highly detailed and very well done. Freddy frozen in a classic glove raised pose … it looked fantastic on display. I heard that in later years the paint would sometimes flake off when the figures were handled so if you ever go searching for these online make sure you get a good look before you buy.

Normally the first issue of a Partwork magazine is sold at an incredibly cheap price, to entice buyers to start collecting. If memory serves I think I only paid about £2 for this first issue.

Sounds awesome, right? … well it was. And it would only get cooler as more issues were released, but good things rarely last.