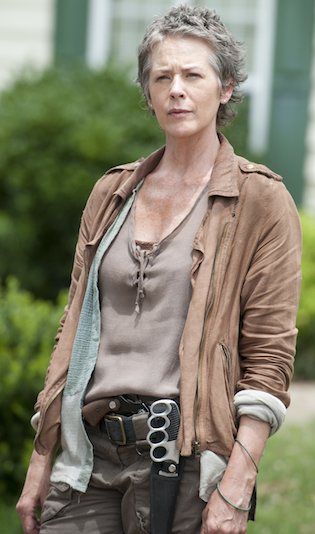 In addition to giving The Mist a run for its money as one of the most depressing pieces of entertainment in the history of entertainment, last night’s episode of The Walking Dead was also a pretty damn exceptional one, one that further drove home my personal belief that the “slow”, character-heavy episodes of the show are not just the most important, but also the best.

Needless to say, if you haven’t yet gotten a chance to watch the episode, it would probably be a wise choice to avoid reading this post until you do, because spoilers aplenty are down yonder!

Last night’s episode, titled ‘The Grove,’ mostly centered on Carol Peletier, one of my personal favorite characters on the show. While none of the characters have been excused from pain and sadness, this being the zombie apocalypse and all, Carol has endured some of the worst of it, and her streak of bad luck and mental/physical trauma began long before the dead started rising from their graves.

Abused by her husband prior to the start of the apocalypse, Carol was dealt a transformative blow to her psyche when her young daughter Sophia went missing, and subsequently turned up as a zombie. Losing everything she loved, Carol from that moment forward became a true survivor, blossoming into a hardened badass by the time Season 3 rolled around – the female version of Daryl, if you will.

It was of course in Season 4 that Carol became one of the most controversial characters on the show, when she first started teaching the young children rescued from Woodbury how to kill walkers, and then took it upon herself to murder Karen and David, who fell deathly ill during the viral outbreak in the prison. When Rick found out about what Carol did, he banished her from the group, sending her off to fend for herself.

Returning at the start of Season 4’s second half, Carol was once again thrust into an extremely depressing situation last night, when she had to kill not one, but two young girls; both of whom she’d come to love as surrogate Sophias, so to speak. After discovering that Lizzie killed her young sister Mika, in an effort to prove that zombies are ‘friends,’ rather than mindless monsters, Carol was forced to not only destroy the brain of the soon to be zombified Mika, but also put a bullet in Lizzie’s head, after coming to the realization that she just wasn’t fit to be around other people.

Yea. Heavy shit. Very heavy shit. And a perfect example of why Carol is the true unsung hero of the show. So step aside, Daryl. Or just make out with her already, will ya?!

I think it’s safe to say that a lot of fans turned on Carol when she killed Karen and David, the same way that Rick did, and last night’s episode served as an utterly heartbreaking clarification of the fact that Carol is a good person, stuck in a situation where being a good person means doing shit that wouldn’t necessarily be considered ‘good,’ in the world us viewers spend our daily lives in.

Perhaps more than anyone else in the group, Carol has always had the best interests of everyone in mind, and she has never hesitated to do what needs to be done, no matter how hard it is to do whatever needs to be done. Remember when Lori was pregnant, and she figured that the baby may have to be delivered via C-section, like Carl was? What did Carol do? She killed herself a walker, cut her open and practiced on it (above), so that she’d be prepared to deliver the baby when that time came. That’s Carol for ya; always keeping the bigger picture in mind, and thinking ahead.

How about when Andrea broke free from Woodbury and arrived at the prison. What did Carol tell her to do? She told her to seduce the Governor, have sex with him if need be, and then kill him while he was at his most vulnerable. Think of how many lives would’ve been spared, had Andrea taken Carol’s advice. Didn’t think of that one, did ya Rick?

As for teaching the kids to use knives and kill walkers, that’s just another example of Carol focusing on the bigger picture, and helping the group to be better prepared for the inevitable. In the world they find themselves in, the cold hard truth is that it’s kill or be killed, no matter how old or young you are, and Carol seems to be the only one who really understands that. Like she said last night, not having a mean bone in your body may be a good quality to have, pre-apocalypse, but when the world is overrun by zombies, it’s a quality that will result in nothing but your demise.

When Rick cast Carol out of the group for killing Karen and David, I was reminded of his similar treatment of Shane, who also more or less had the best interests of the group in mind. I never saw Shane as a bad guy, but rather one that was just doing what needed to be done, and Carol is very much the same way. While everyone else is afraid to make the tough choices and do the hard things to do, Carol steps up to the plate and takes charge, which quite frankly makes her a better leader than Rick has proven himself to be.

Would Rick have put a bullet in Lizzie’s head, the way Carol did last night? Probably not. And I’m willing to bet that a lot more people would’ve died, as a result of that decision.

It’s easy to look at Carol as a villain of sorts, due to her oftentimes shocking actions, but last night was yet another example of her doing what’s best for herself and her fellow survivors, and going above and beyond the call of duty, to protect the people she cares about. Lizzie was just a young kid, this is true, but she proved that she was a threat to the safety of the group, and in a world where the dead are walking the earth, human threats have to be dealt with the same way zombie threats do; with a bullet to the head. Cold. Hard. Truth.

And lest you think Carol’s just playing God with everyone else’s lives, don’t forget that at the end of the episode she gave Tyreese the opportunity to end her own, if he felt that she was unfit to be around people. Thankfully, he was able to see that bigger picture and realize Carol was just doing what needed to be done, no matter how much it hurt him personally, though Carol’s willingness to put her own life in the hands of someone else proved that she’s got no problem sacrificing herself, if it’s in the best interest of others.

You’re a true survivor and a true hero, Carol Peletier, and I salute you. Just please don’t die anytime soon. The group needs you. The whole world needs you.