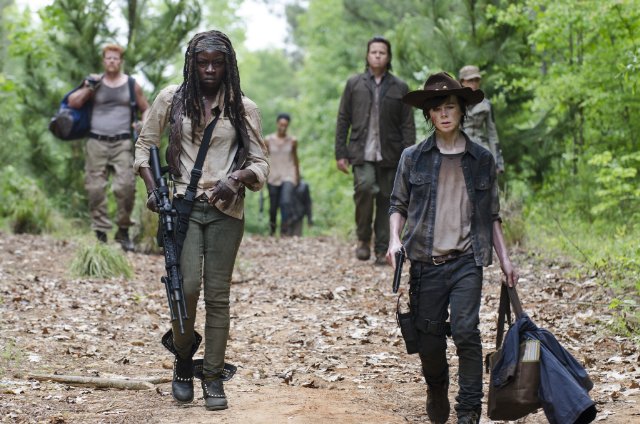 It was to be expected that Season 5’s action-packed premiere episode of The Walking Dead would pave the way for a handful of slower ones, centered mostly on driving the story to an epic mid-season conclusion.

Anyone who’s been watching The Walking Dead with any regularity surely knows the way the show works at this point, and anyone who thinks ‘story’ and ‘boring’ are synonyms should probably click over to Syfy and watch Z Nation instead.

In an effort to curb the boring nature of TV recaps, I’ve decided to try something new this week, which I’ll probably be sticking with in the weeks – and shows – to come. After some deep soul searching (not really), I realized that in-depth breakdowns of EVERYTHING that happens in an episode are inherently bland, so let’s give this new approach a whirl.

Here are five notable things that happened in ‘Strangers,’ along with my thoughts on those five major developments!

1) OUR HEROES MADE A NEW FRIEND!

After Rick & Carol officially made peace with one another and Daryl’s squirrel senses tingled, letting him know that someone is watching the group, the gang heard the screams of a man in serious peril, and quickly came to his rescue. Because, ya know, they’re good people.

This marked the introduction of new character Father Gabriel, a priest who claims to have not yet gotten his hands dirty, despite the world going to shit long ago. It was immediately clear to Rick – and to us – that something isn’t quite right with Gabriel, as his ‘I’ve never killed a man, woman or zombie’ speech reeks of serious bullshit.

Gabriel took the gang to his church, where empty food cans littered the floor and not a single other soul was in sight. Low on food, he informed them that there’s a food bank close by, which hasn’t yet raided because it’s been overrun by zombies.

Gabriel’s church eerily appeared to have been untouched by walkers, further adding to the shadiness of his story. After all, if there’s anything we’ve learned in the last couple seasons, it’s that there is no true sanctuary left in the world.

2) OUR HEROES (WITH THEIR NEW FRIEND) BATTLED SLIME ZOMBIES!

At the food bank, our brave heroes discovered that Gabriel wasn’t lying, and that horrifying zombies indeed do stand between them and a hearty meal. But these aren’t just any zombies. Oh no. The basement of the bank was totally flooded with water, turning these particular zombies into ooey, gooey SLIME ZOMBIES.

Not that the zombies on The Walking Dead haven’t always been awesome but it seems that making them more memorable and horrifying than ever was a big goal of Season 5, as we’ve already seen more truly revolting monsters. The flooded basement in last night’s episode was full of them, their water-logged flesh dripping off their faces like candles left out in the hot Georgia sun.

Of course, Rick and company prevailed, managing to kill/trap enough of the water walkers to exit the food bank with several shopping carts full of canned goods. Bob was almost devoured in the process, though we’ll get to Bob in just a minute. Bob. Poor bob.

3) OUR HEROES’ NEW FRIEND IS DEFINITELY HIDING SOMETHING…

The gang’s fears about their new friend were all but confirmed when Carl discovered some mysterious markings on the side of the church, including deep knife cuts. Carved into the wood were even the words ‘You’ll burn for this,’ suggesting that Gabriel is the ‘You’ll’ in this situation.

If I was a betting man, I’d bet that Gabriel ‘fed’ the other members of his clergy to walkers outside the church at some point in time, as a way of appeasing them and keeping them away from him. All signs throughout the episode point to this being the case, and it would explain why Gabriel’s story just doesn’t jive with the facts.

He’s hiding something. And everyone knows it. As Rick promised him toward the end of the episode, if that ‘something’ negatively impacts his family, he will not hesitate to decorate his dirty clothes with priest blood. You’d better fess up before it’s too late, Father.

4) DARYL & CAROL ARE HOT ON THE TAIL OF BETH’S KIDNAPPERS!

While Rick and select group members were battling the slime zombies, Daryl and Carol went on a mission of their own, discovering a working car on the side of the road. Though they initially planned on leaving it there as a back-up plan, it wasn’t long before the engine was fired up…

Their bellies full and their BACs high from the Last Supper that took place in Gabriel’s church, Daryl and Carol spotted the same car that kidnapped Beth last season (the one with the cross on the back window), and engaged in a hot pursuit of the vehicle. We only saw the very beginning of the chase, and I can only assume we’ll be seeing more of it next week.

The hint that was being dropped here is that Beth is perhaps still alive, which was unfortunately already spoiled by the Season 5 trailer. I wish it wasn’t, because the suspense of wondering right now would be much more effective if we didn’t already know the answer.

Then again, it’s entirely possible that she is dead at the present time, and those clips from the trailer were flashbacks to a time when she wasn’t, so let’s hold off on that thought for now.

There was a lot of eating going on last night, and I’m not just talking about zombies eating humans. After the aforementioned Last Supper, wherein Rick agreed to go to Washington, Bob shared one last kiss with Sasha and then headed outside, where he appeared to be having some sort of emotional breakdown.

As the tears of either joy or serious depression streamed down his face, Bob was slammed in the back of the head by a shadowy figure reminiscent of the one who was watching Daryl and Carol earlier in the episode, and we soon realized it was someone from Terminus.

In the shocking finale of the episode, Gareth and friends had a feast of their own at their campground, and it was revealed that they were eating Bob’s leg – while Bob, still very much alive, watched on. Gareth promised Bob that the rest of his group would be the next course, as the lines between human and zombie became even more blurred.

One thing I couldn’t help but wonder was why Bob requested one more kiss from Sasha and then left the safety of the church, actions that led me to believe he was bitten during the slime zombie massacre. If that’s the case, that would mean that Gareth and his men consumed tainted meat, which needless to say wouldn’t be a good thing for them.

Also, did anyone else spot the dude that Tyreese claimed to kill last week, in the final moments of this week’s episode? I could swear the camera very quickly caught a glimpse of him, and his face appeared to be in good shape. I was pretty sure last week that Tyreese didn’t actually kill him, though we know for sure that he beat his face up pretty badly. Hm…

Other things that happened last night; Rick told Carl to never let his guard down, Gabriel came face-to-face with the zombie version of a girl he once knew, Glenn found a bunch of silencers, and that chick who used to run with The Governor has the hots for Glenn – and his silencers.

Next week; Rick yells at Gabriel! A one-legged Bob gets kicked in the face! Daryl and Carol shift into second gear!