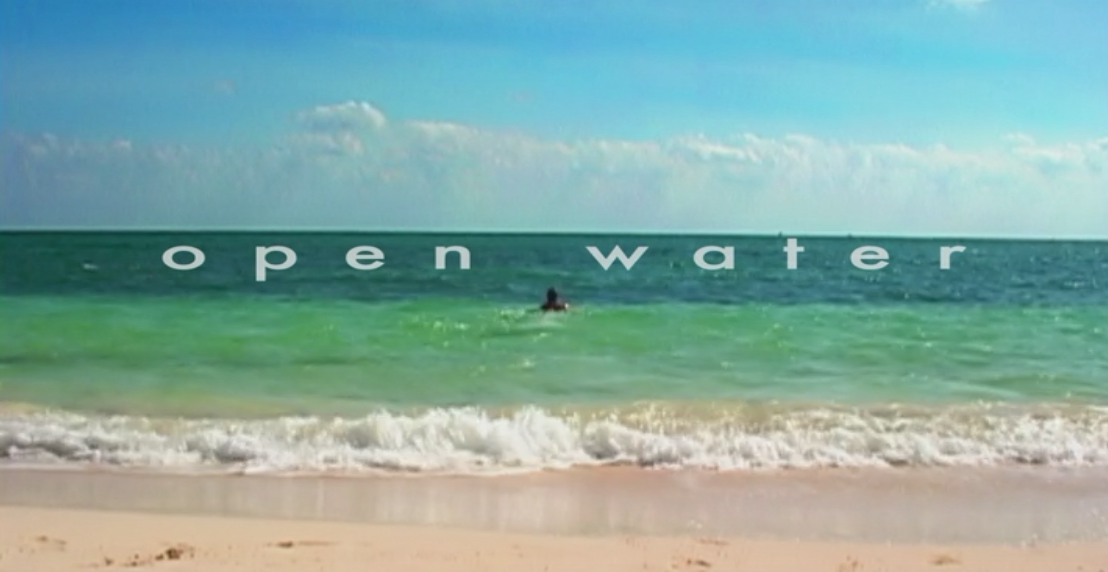 I just rewatched Open Water, and felt like talking about how great and underappreciated I think it is.

How anyone can watch this movie and not find it to be wholly terrifying is beyond me, yet it holds a sad 32% audience score on Rotten Tomatoes (despite having a much more respectable 72% on the critic-based Tomatometer). Just mention it on social media, and people come out of the woodwork to bash it. But whatever. To each their own. I just want to talk about why I like it, and why I think those whose opinion of it isn’t incredibly high may want to consider giving it another watch.

For one, it’s been out for about eleven years, and it still holds up. I found it to be just as effective as I did when it came out if not more so.

Open Water’s effectiveness lies in its realism as well as its simplicity. This isn’t a monster movie or even so much a shark movie as it may seem on the surface. If you’re going in expecting Jaws, you’re going to be let down, and I can’t help but wonder if that’s why it didn’t resonate with so many people. It’s not about sharks. It’s about desperation, helplessness, and the absolute terror that goes along with those.

The movie is based on real events. The characters aren’t representative of their real-life counterparts, but the situation is pretty close, and it’s a goddamn terrifying situation.

In case you haven’t seen the film (and by the way, this article is full of spoilers), it’s about a couple who go on vacation, go out in the ocean with a group of people to scuba dive, and get accidentally left behind only to find themselves alone in the middle of the ocean. It’s scary because it happened, but it’s even scarier because it could happen to you. It’s the kind of movie that you tend to think of when you’re doing anything that could potentially lead to such a scenario, and these are the kinds of films that I typically find most frightening.

If I’m going out into the ocean (or honestly if I’m anywhere near it), I’m thinking about how terrible it would be to find myself in an Open Water-like situation. If I fly on an airplane, I’m thinking about Flight 180 in Final Destination (or United 93). When I’m driving on the interstate, I think about the pile-up in Final Destination 2. When I drive over a bridge, I think about the collapse in The Mothman Prophecies (sorry, but I saw that way before the last FD movie). I would never get on a ski lift, but if I did, there’s no question that I would think about Adam Green’s Frozen.

These are cinematic scenarios that stick with me long after I leave the movie theater or turn off the DVD. They can’t be unseen, and they will stick in my mind probably for the rest of my life.

Funnily enough, one of the characters in Open Water comments that she wanted to go skiing as opposed to going to the ocean, which watching now only made me think about Frozen.

In addition to desperation and all of that, some other scary themes running through Open Water are those of the unknown (not knowing what’s lurking beneath the water) and the consequences of the choices we make (the vacation they chose, the decision not to swim toward one of two boats within view early in their predicament). The film makes a great comment on just how fragile our lives really are. Any decision we make can set in motion events that will lead to our end (or worse…our suffering).

Watching it this time around, I found some scenes that I hadn’t really given much thought to in previous viewings to be particularly haunting. One that comes to mind is a scene that simply shows children playing on the beach. It happens while the two main characters are stuck in the ocean (obviously), and it’s just disturbing to see it happening knowing that somewhere out in the distance the two are in the situation they’re in.

Another scene like this shows people back at a beach resort drinking, dancing, and having a great time as the night falls, and the main characters are just about to run out of hope entirely. It’s chilling to think that at anytime while we’re living our lives and having fun like the people at the resort, there are other people out of view who are suffering in ways we don’t even know (not to mention those who are suffering in ways in which we are well aware).

I don’t know if filmmaker Chris Kentis was going for that degree of depth with such a scene, but it works on that level for me.

Open Water was shot on digital video, which gives the movie an authentic, almost found footage feel, but without the found footage gimmick, yet it manages to simultaneously keep a cinematic feel thanks to the camerawork and score by Graeme Revell.

The dread consistently builds throughout the entire film, as the movie gives you plenty of time to imagine yourself in the same situation. The fear comes from sharks, but also from anything else that lives in the ocean, from the idea of being left alone in the sea if the one person you’re with disappears or dies, and even from the thought of just being stuck out there until you ultimately die from dehydration.

The film’s conclusion is devastating even though you basically know the whole way through it’s not going to end well for the characters. It’s made all the more soul-shattering when you consider that it really happened.

Fan of the movie? Hate it? Tell us what you liked or what you didn’t about it in the comments.