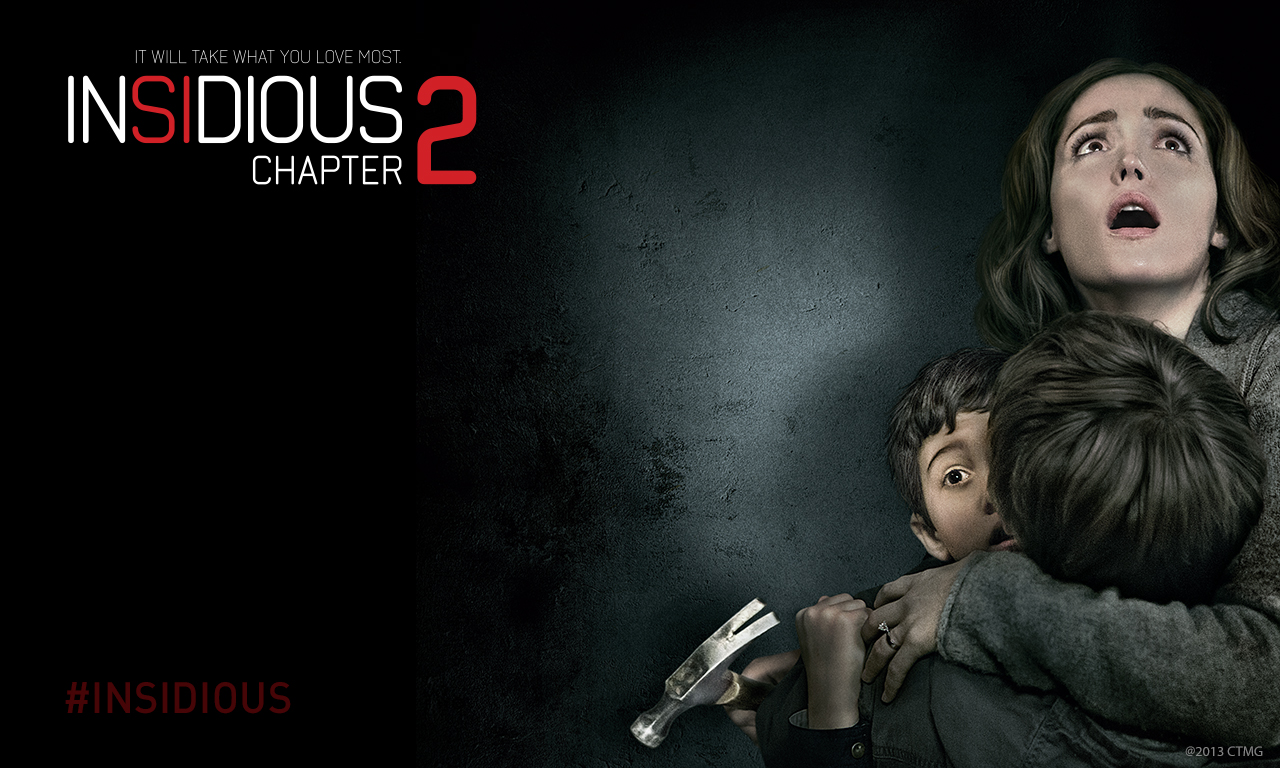 When Insidious was released back in 2011, the general consensus was that the first half of the film was incredibly effective while the second half was a little too silly for its own good. Indeed the movie does take a turn for the relatively goofy once a couple of bumbling ghost hunters are introduced, and fans have for years bemoaned the look of the sinister ‘Red-Faced Demon.’

Director James Wan responded to this criticism in a very interesting way, first by making The Conjuring just a couple years later. Wan’s follow-up film was very much in line with the tone of Insidious‘ first half, catering directly to those who prefer classic haunted house spook-shows. Up next he made a sequel to Insidious, which is almost tailor made for those who dug the first film’s wacky second half.

Released in 2013, Insidious: Chapter 2 was unsurprisingly criticized by many, with the general feeling being that it was an expansion on all the bad parts of the first film – rather than the good ones. And it’s hard to argue that point, as Chapter 2 much more prominently featured not only goofy ghost hunters Specs and Tucker but also delved much deeper into the world of The Further.

At this point in my life, the thing that impresses me most about horror movies is, quite simply, when they dare to take chances. And in a genre so full of sequels, remakes and even original films that do little more than rehash old ideas and play around with established tropes, the only movies that really stand out are the ones that aren’t afraid to, well, stand out.

In spite of its flaws, Insidious: Chapter 2 stands out. And that’s why I can’t help but love it.

Rather than simply trying to recreate the magic of Insidious, writer Leigh Whannell and director James Wan admirably traveled down a much riskier path with the first sequel, expanding heavily upon the characters, their situation and the overall mythology of the franchise. And they indeed do take many chances, making the film a whole lot wackier than you’d expect a Hollywood sequel to be.

For starters, there’s a purpose to Insidious: Chapter 2‘s existence right off the bat, as the first film left us off on a serious cliffhanger. Elise Rainier was choked to death by a possessed Josh Lambert at the end of Insidious and the sequel more or less picks up from that point, immediately making us question whether Josh is actually who he appears to be.

Insidious: Chapter 2 is mainly the story of Josh, whose haunted past is heavily explored thanks to flashbacks both to his childhood as well as the childhood of the entity that tormented him as a child – and has possessed him as an adult. For almost the entirety of the sequel, Josh isn’t actually Josh, while the real Josh is stuck somewhere out in The Further.

And that’s where things get really interesting. While Josh’s physical body is possessed by a demonic spirit, and quickly deteriorating, his spirit body is lost in The Further. Whannell has a whole lot of fun with this idea, allowing for ‘spirit Josh’ to literally enter scenes from the first Insidious as well as past events from his childhood. I’m not saying it all makes sense, but it’s damn sure fun.

Then there’s of course the so-called Bride in Black, who has taken over Josh’s physical body. Merely a creepy image in the first film, the Bride in Black is developed into a fully fleshed out character in Chapter 2, and though it wasn’t exactly necessary for Whannell’s script to head down that path, it’s precisely because it does that the sequel feels like a genuine expansion, rather than a cash-grab rehash.

We learn that the Bride in Black is actually a man by the name of Parker Crane, who was a patient at the hospital Josh’s mother used to work at. Admitted to the hospital for trying to castrate himself, we also learn that a young Parker was forced by his insane mother to dress up as a little girl, insisting that he call himself Marilyn – Parker was the name given to him by his father, and she hates his father.

Yes, the Bride in Black actually turns out to be a cross-dressing old man, and the script goes one step further in establishing that Parker was a serial killer who mostly targeted young women. As the film explains, the reason Parker is so attached to Josh is because he reminds him of the boy he always wanted to be, this little tidbit furthering the Insidious mythology in a totally unexpected way.

The savior at the end of the film is again Elise Rainier (Lin Shaye) who pops up for a special appearance as a spirit. In a film less wacky than Insidious 2, her return as well as the corny dialogue she spouts off would drag the movie down, but it’s hard not to be totally on board by the time she shows up – though I must note that the scenes of a young Elise are ruined by the unnecessary need to dub in Shaye’s voice.

Another thing that really works in the context of Insidious: Chapter 2 are Specs and Tucker, who seemed a wee bit out of place in the first Insidious – especially since they enter the movie right when it’s at its scariest point. The sequel, however, feels a movie tailor made for them, and when they do silly things like play their own version of ‘rock, paper, scissors,’ you laugh rather than roll your eyes.

Of course, the best thing Insidious: Chapter 2 does is not only expand upon the story of the Lambert family but also wrap it up neatly with a bow. There’s a reason Chapter 3 is a prequel and that’s because there’s really nothing more to tell in regards to Josh and his family. Considering they’re such likeable characters, it’s a real treat that we got to see a definite beginning, middle and end to their story.

Is Insidious: Chapter 2 as scary as the first film? Absolutely not. And I’d have a hard time arguing with anyone who feels that it’s overall an inferior effort. But Chapter 2 is the sort of sequel that isn’t afraid to take chances and be wacky, and in the world of horror sequels, you can’t ask for much more. You get the sense that Whannell and Wan really just went for it, and I for one appreciate that a whole lot.

Besides, Insidious 2 has two Pat Wilsons and Lin Shaye beats a woman to death with a rocking horse. So. Ya know. It’s kind of hard to not love it.