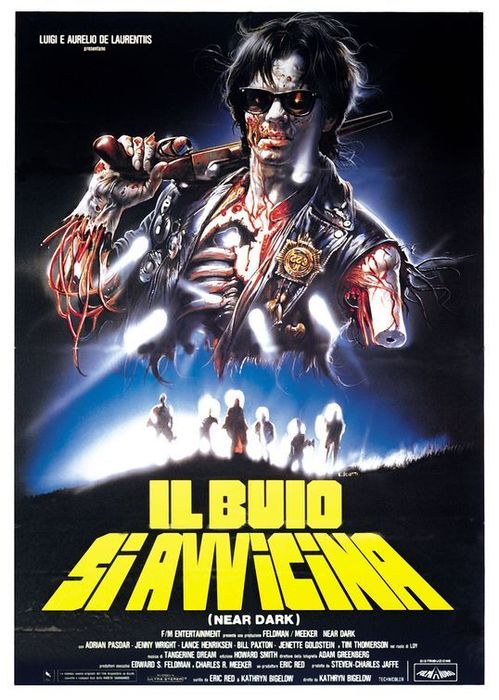 Whenever anyone asks me to list off my all-time favorite vampire films, the first movie that comes to mind is always 1987’s Near Dark, directed by Academy Award winner Kathryn Bigelow.

One of the best vampire love stories ever told, Near Dark centers on the character of Caleb Colton, whose life is flip turned upside down after a chance encounter with the beautiful Mae. As it turns out, Mae is a vampire, and after a bite to the neck turns Caleb, he finds himself torn between his humanity and life with his new girlfriend’s vicious vampire clan.

Starring Bill Paxton and Lance Henriksen, who had previously appeared together in Aliens, Near Dark is about as good as vampire movies get, seamlessly merging beautiful romance and gory brutality. With incredible performances all around – particularly from Paxton and Henriksen – and a mesmerizing soundtrack from Tangerine Dream, it’s oozing with both style and substance, and is one of my personal horror favorites.

Back in 2008, when Twilight-fever was sweeping the nation and horror remakes were all the rage in Hollywood, it seemed inevitable that Near Dark would soon find itself on the ole chopping block, and indeed it did. In fact, it was a couple years prior that Platinum Dunes announced a Near Dark remake was in the works.

Samuel Bayer – who went on to direct the Nightmare on Elm Street remake – was originally attached to direct the movie, written by Matt Venne (White Noise 2). “The film is a gritty look at the life of this small group of people trekking through the Southwest—who also happen to be vampires,” Venne said of the project, expressing his love for the “poetic” original.

Christopher B. Landon, writer of all the Paranormal Activity sequels, was at one point brought in to rewrite Venne’s script, and the production reached the point that casting was set to begin.

A casting breakdown for the character of Caleb hit the net around this time, with Adrian Pasdar’s original role being re-written as a 19-year-old party dude, who comes across Mae at a pinball arcade. Word was that casting agents were looking for an actor to fill the role, though it wasn’t long before the kibosh was put on the whole project.

In 2008, Platinum Dunes producer Brad Fuller revealed that Twilight had oddly enough hurt rather than helped move the remake along, suggesting too many similarities between the films with derailing the company’s Near Dark plans.

“Near Dark is probably not going to happen,” he said. “I think that Twilight was the same type of thing we were going for although Near Dark was a much darker, sexier, rated R version of that. But I’m concerned that, conceptually, that Near Dark and Twilight are too similar in terms of a vampire movie. For now, that movie is on hold.” 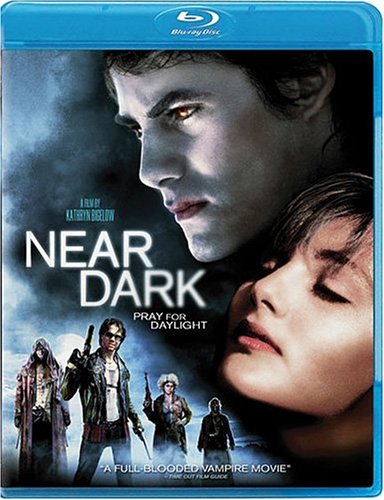 Instead of a remake, we got a Blu-ray release of the original Near Dark shortly after Fuller announced the death of the project, which played up the very same Twilight connection that turned Platinum Dunes off. The disc featured brand new cover art that closely resembled the Twilight poster, which naturally led many to boycott the release.

Now the reason I bring all this up today is because I just stumbled upon a Wikipedia entry for the aborted 2008 Near Dark remake, which suggests that the film had actually been partially shot, before finding itself in development hell. While it’s of course entirely possible that the whole entry is some sort of fan-submitted prank, it nevertheless caught my interest, because I had never before heard that the film had at any point found its way in front of cameras.

Describing Near Dark 2008 as “an unfinished vampire film,” the entry includes a cast list and even a director, as well as a budget of $6 million. The director listed is not Samuel Bayer but rather Ryan Zeller, with Matt Craven and Kathryn Bigelow listed as writers. All of this is very strange, considering Craven is an actor, and Zeller doesn’t even appear to have an IMDb page.

‘Filming took place in the summer of 2007, but was halted after several weeks by the studio’s disapproval of the dailies,’ the entry reads.

If I’m reading this correctly, the suggestion being made is that a remake was partially shot BEFORE Samuel Bayer and Matt Venne were hired, which is again very interesting considering I never heard a peep about the project until those two were brought on board. The entry goes on to say that ‘A new script was later received, a new director hired, and the majority of the film re-cast,’ presumably referring to the Bayer-helmed project we were all informed of.

The other interesting thing about the Wikipedia entry is the cast list, which includes Bill Paxton as Jesse – the character Henriksen played in the original – and even Nightmare on Elm Street star Heather Langenkamp as Diamond – who was played by Jenette Goldstein in the original. Oddly enough, Goldstein is also listed as being part of the cast, playing the role of Mae – which makes absolutely no sense, given her age.

Milo Ventimiglia and Sophia Bush round out the cast listing as new characters Court and Cordelia Blue, with Tyler Thompson playing Homer and Benjamin McKenzie as Joshua.

While I wouldn’t be surprised to find out that most – if not all – of the entry is complete and utter bullshit, I can’t help but wonder if a Near Dark remake had in fact been partially shot, and I’d be incredibly curious to see some pictures or learn a bit more about the production – if, in fact, there’s any truth to any of this.

For now, I’ll have to do some more hunting and digging. If anyone knows ANYTHING about this supposedly half-shot first draft of the Near Dark remake, please do get in touch with me and share your knowledge!