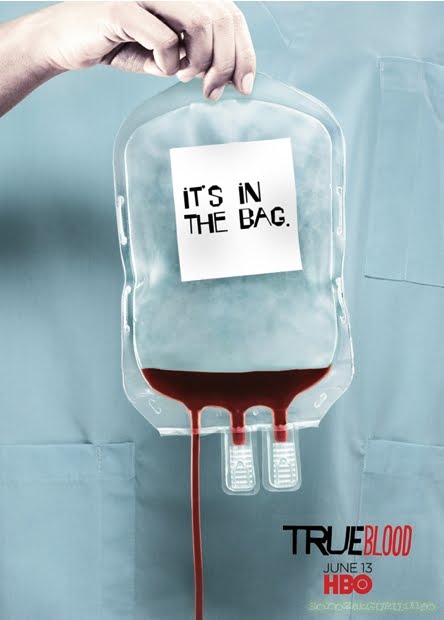 You know when you’ve got something to do – say, a doctor’s appointment – in a couple hours, and you’re not quite sure what to do before it, so you just sort of mosey around and kill time? That’s what last night’s episode of True Blood felt like.

Titled ‘Karma,’ the sixth episode of True Blood‘s final season was for the most part a time killer, primarily centered on setting the stage for the (sure to be) explosive finale. But that doesn’t mean it wasn’t a good one, nor does it mean nothing major happened.

First up, we found out that Sookie is infected with the H-Vamp virus, which she realized/was positively tested for in the wake of Jessica informing her that Bill’s got it.

Remember in the Alcide death episode, when Sookie was showered in infected blood? Well, it turns out she had a cut on her arm at the time, allowing for the tainted blood to alter her fairy blood. Bill had subsequently drank Sookie’s blood, of course having no idea that she was infected.

On a related note, we also found out that there is in fact a cure for the virus, which is something I’m pretty sure we all expected to pop up – after all, it’s unlikely that Sookie, Bill AND Eric will all meet the true death before season’s end. The source of the cure, however, was a big surprise.

As she revealed to her sister, Sarah Newlin consumed a heaping vial of an antidote while at last season’s vampire holocaust camp, meaning that her body is quite literally the cure for the epidemic – ironic, and quite fitting, given the fact that she was responsible for creating it.

Proving that she wasn’t full of shit, as she usually is, Sarah (or should I say ‘Noomi’) cured her sister, a few sucks of her blood completely erasing those pesky black veins that are synonymous with the disease.

Speaking of which, Bill was contending with a whole lot of those black veins throughout the episode, with his strand of the disease seeming to spread a whole lot faster than everyone else’s. His major goal of the episode was meeting with a lawyer and altering his will so that Jessica will get everything when he succumbs to the disease, which is easier said than done.

After the lawyer informed Bill that he wasn’t able to make that change, unless he was to actually adopt Jessica, she tried extorting him out of $10 million, claiming it was the only way to get the proper paperwork filed before it was too late. Fed up, Bill stabbed her in the throat with a letter opener, in a scene reminiscent of Kevin Bacon’s death in Friday the 13th.

Always fun to see Bill kill people, and I just loved the fact that after all he’s been through in the vampire world, it was a human lawyer that made him totally lose his shit. I’m right there with ya, Compton!

Over in Pam and Eric’s neck of the woods, they were captured by the Yakuza after a weakened Eric tried in vain to go all Oldboy on the entire gang, chained up in front of a glass window and forced to watch the sunrise together. Right as their faces were starting to form weird CG ‘burns,’ the show’s two best characters were freed from their shackles, with the promise that they’d help the Yakuza leader track down – and kill – Sarah Newlin.

At the very end of the episode, they indeed led the gang to the Newlin household, where Sarah’s cured sister was found. For a second there, I was thinking they were going to storm into the house and eviscerate Sarah, without ever realizing she had the cure coursing through her veins, which would’ve been pretty funny. But alas, Eric and Pam knew what was up the minute they laid eyes on Sarah’s sister, so now they’ll have to try and extract Sarah’s whereabouts from her.

Elsewhere, Lafayette and Lettie Mae drank James’ blood in an effort to make contact with Tara, Lafayette finally realizing that maybe Lettie Mae is only 99.9% crazy. In the dream world, Tara took them to her childhood home and started digging up dirt in the backyard, seemingly intent on showing them something. The V-trip was broken up by Lettie Mae’s reverend husband, presumably because the storyline needs to be expanded over the course of a few more episodes.

Still not entirely convinced that Tara is actually dead, for the record…

Last week, Violet overhead Jason and Jessica doing the nasty, which she responded to last night in an unexpected way; she seduced Jason, in an effort to remind him that they belong to one another. After Jason received a phone call in the middle of the night from Jessica, however, Violet went into a fit of rage, leaving behind a note at his house that indicated their relationship is over. It was precisely what Jason wanted, though we can be pretty sure that Violet isn’t done with him just yet.

The other big sub-plot running through the episode was the budding relationship between Adilyn and Wade, who have fallen in love and started having sex. Of course, this is strange considering the fact that their parents are now engaged, and Andy is none too pleased about the two sharing a sex life.

After snapping at them, Adilyn and Wade ran away from home and hid out at Fort Bellefleur, where Violet tracked the young lovers down. Convincing them that her intentions were good, Violet led the two to an unknown hide-out destination, where I can only assume she intends on drinking them both dry.

Finally, we’ve got Sam, who is dealing with some love issues of his own. His pregnant fiancee Nicole has finally had enough of Bon Temps and wants to skip town with Sam, though he’s torn between his town and his love. The episode left us hanging on Sam’s decision, though it’s likely that most don’t care either way.

It’s sad, really, because Sam is a great character, though it’s been far too long since he’s had any semblance of a compelling storyline. Sam is in many ways the perfect example of the constant struggle the writers have when it comes to properly utilizing the wealth of characters they’ve created over the years – it’s become quite common for some of those characters to get lost in the shuffle, and it has definitely happened to Sam, much like it did Alcide.

The episode’s extended scene of Bill in a human setting (the lawyer’s waiting room) was more or less the perfect summation of ‘Karma’ as a whole, as time-killing was primarily the name of the game. But hey, at least we were killing time with the characters we actually care about, rather than the ones we don’t. It’s for this reason that ‘Karma’ was one of the better hours we’ve seen thus far this season, if only because of the quality time spent with those core characters.

That said, the episode admittedly left me feeling like there’s just not all that much meat on this final season’s bones, which is something I had forgotten about in the wake of the past two weeks’ standout episodes. It’s as if the destination is in sight and we’re being ever so slowly dragged toward it, and I can only hope that things start to pick up a bit.

As it stands right now, more than halfway over, True Blood‘s final season has been equal parts lackluster and entertaining, and now’s the time to really kick things into high gear and wrap things up on the highest of high notes. Here’s to hoping!