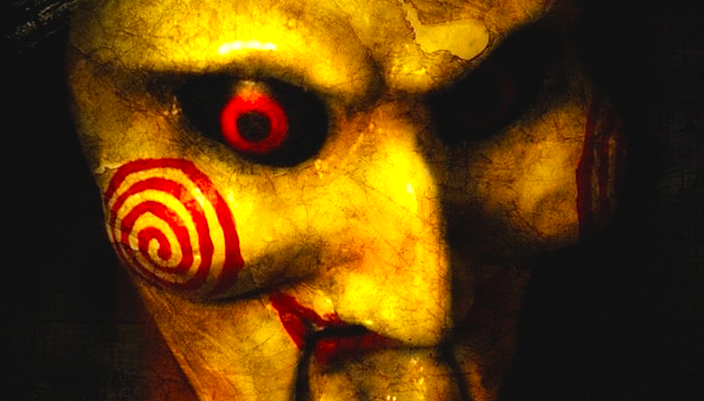 I’ve always believed there is a quite unique and special story running through the Saw movies that was constantly fighting to get out. The first two or three films got close to making that story happen (especially the original), but the longer the series continued the more it got twisted and replaced by a large dose of senseless gore.

Luckily I LOVE a bit of senseless gore, so in general I am very fond of the entire Saw franchise. I think it came damn close to being something truly amazing, but when the dust settled it didn’t quite hit the mark.

Saw is at its best when the on-screen victims AND we the viewers are presented with a trap that CAN be escaped from. It challenges the characters to push themselves to the limits of physical sacrifice, and challenges all of us to consider a simple question: “Could I do that to survive?” …

This trap plays on three of my biggest fears: Claustrophobia, drowning, and, errrrrr, stabbing pens into my neck! … Well, pens, knifes, anything really. My neck is a no-stab zone! The cube was of course designed with no means of escape, but Special Agent Strahm (Scott Patterson) is a tough guy, so an emergency tracheotomy with a Biro was just another day at the office. He never had to deal with crap like this on the ‘Gilmore Girls’ …

Like the ‘Greed’ victim from Se7en, this trap involved removing body parts in order to tip a set of scales. In the red corner we have a fairly overweight gentleman who decides to hack away at his love handles with a knife (good plan) … and in the blue corner a slim woman who has far less ‘excess skin’ to work with. Two contestants, only one can walk away. Just as it seems Man-Flesh is going to win this brutal contest … a meat cleaver is raised and Girl power prevails due to the removal of an entire arm just below the elbow!

I’m not a huge fan of the final instalment but this opening scene provided an interesting predicament for the unfortunate trio involved. Two young guys unknowingly dating the same girl and both thinking she loves them, unaware of her cheating ways. The game will only end when one of them is VERY dead. Will the guys team up to punish a shared source of pain? Or will they fight for the damsel in distress and try to kill each other in romantic combat? … Nah, they waste her!

Jeff (Angus Macfadyen), must decide if he has the strength to burn items that belonged to his deceased son in order to gain access to a key that will save a judge from drowning in blended rotting pig juice. The judge gave a lenient sentence to the man who was directly responsible for the death of the boy so Jeff isn’t exactly in a hurry to release the terrified dude and he gets quite a few mouthfuls of maggot-filled liquid pork before freedom is finally granted.

I think I’d be capable of doing quite a lot to save my skin, but cutting out my own EYE with a scalpel to retrieve a key implanted behind it? Nope, nope, nope. A friend once asked me if I thought it would hurt less by “keeping your eye tightly closed” … I’m thinking no. Probably not. A beatable trap but this was Jigsaw pushing a subject to the very limit.

Cecil (Billy Otis), had the privilege of being the first person to ever face a Jigsaw trap. After some early problems he successfully pushes his face through the blades and gains freedom. But instead of thanking Jigsaw for his time and carefully backing out of the room to fight another day, he tries to attack his captor and somehow manages to fall face-first into a large bundle of razor wire. He deserved it though, so it’s all good.

A simple test that most people probably secretly tried as they were watching it unfold. Two captives, and a challenge to hold their breath as long as possible. Each time they gasped for air a large clamp would close around their chests crushing ribs and doing serious damage. Only problem is that one of the ‘contestants’ was a heavy smoker with heart disease while the other was in good health, guess who made it? David Blaine would breeze through this.

I’m not keen on needles. When I have blood taken or get an inoculation of some kind I’m the guy who closes his eyes and looks away. So watching someone get dropped into a pit full of dirty and blood stained syringes was … unpleasant for me. It’s the sort of test someone WOULD have to push me into, I couldn’t jump in there myself. I’ve watched Jigsaw mess up humans in some seriously disturbing ways, but this makes me wince more than anything else.

Dr Gordon (Cary Elwes), and Adam (Leigh Whannell), were part of a far bigger and more complex game than they could have ever imagined, but when you strip away everything else the decision they faced was simple … Could YOU cut off your own foot to gain freedom?

The trap people tend to remember more than any other, and maybe the most pure example of what Jigsaw was trying to achieve. Compared to what would follow, escaping this device was relatively straightforward. Just find a key hidden in the stomach of a dead dude on the floor (he wasn’t dead, that was a big fat LIE), and you are free! Of course time is a factor and knowing my luck I would spend sixty seconds rummaging through someones bladder by mistake just before getting my face ripped open. Challenging and terrifying, but very escapable if you are able to maintain focus and paid attention in Biology class …