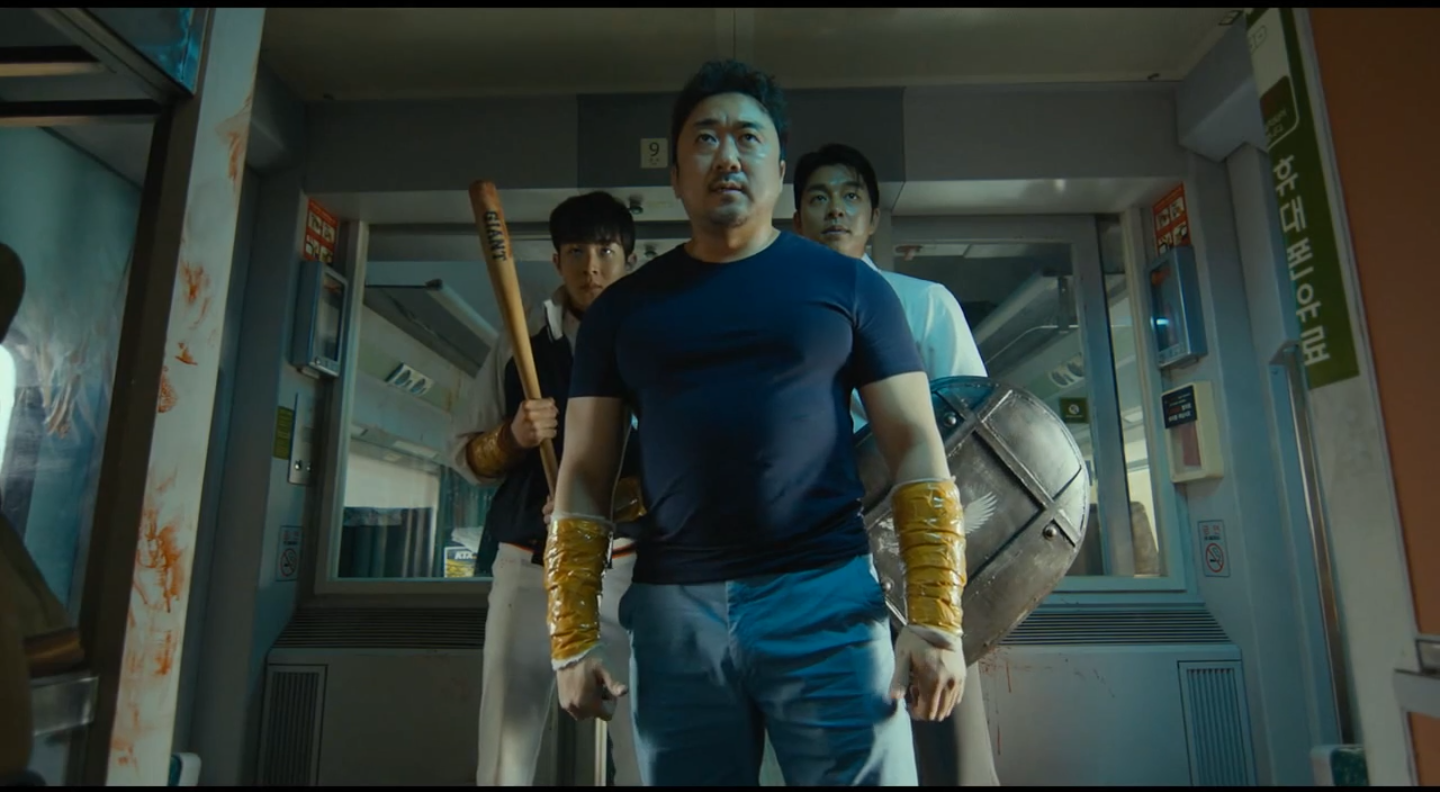 If there is one sub-genre that horror fans keep claiming is “dead” or “used up” it’s the zombie flick. With The Walking Dead being as massive as it is and every amateur filmmaker making their attempt at a Night of the Living Dead the market has become more than saturated. That doesn’t mean, however, that the sub-genre is dead, there is always potential for another great movie, and South Korean filmmaker Sang-ho Yeon aims to prove that with his new film Train to Busan. Boasting an extremely simple premise, this film is able to draw tension, suspense, and terror like we haven’t seen from this kind of movie for the better part of a decade.

The film uses a classic set up, as a chemical spill causes an outbreak that turns most of the population into flesh-eating zombies. This outbreak just happens to occur on the same day Seok Woo (Yoo Gong) is taking his daughter Soo-an (Soo-an Kim) to see her mother in Busan. A recently infected girl finds her way onto the train last second and before long the virus begins rapidly spreading through the cabins. Stuck on a speeding train, the surviving travelers must find a way to stay alive until they reach their destination.

Like I said, the film operates within a simple setting, but it uses it to create a truly intense experience. What makes Train to Busan so heart-poundingly refreshing is the fact that it isn’t about the bigger picture scenario. This movie is about the people on the train and their struggle to survive, they don’t waste time on the “why” of it all and in turn that makes this movie that much more thrilling. You feel like you are in it with these people, you feel like if they survive you survive and it makes for a wonderfully unique horror experience.

Sang-ho Yeon, who comes from the animation world, directed the film and as his live-action debut, it more than proves he can handle the reality of it all. The way he directs some of these scenes, both of action and pure dramatics, feels authentic and real. Characters stop to mourn the death of friends rather than just run away, other passengers fear the spreading infection and make drastic decisions, it all feels like a real scenario with real people.

Yeon also manages to build upon the zombie mythology in some cool and creative ways, mostly in the use of their vision. Without spoiling anything I’ll just say he found a great way to allow his survivors to navigate the infected cabins and it makes for some of the most edge-of-your-seat intense moments I’ve seen in a movie all year. This movie is rarely, if ever dull and is always moving forward, I couldn’t take my eyes off the screen for even a second and by the final act, I was literally screaming at my television due to the suspense of it all.

A movie like this, regardless of how good the zombies or special effects are, is reliant on the performances of its main characters. This is a movie that wants to feel real and to do so the characters have to be authentic. Yoo Gong does a wonderful job playing the crappy father trying to please his daughter Soo-an, who gives a great child performance herself. The standouts, however, are Dong-seok Ma as Sang Hwa and Yu-mi Jung as Sung Gyeong, the loving couple expecting a baby. The two draw most of the emotion from the film and play a huge role in getting you attached to the surviving passengers. Eui-sung Kim also puts in a fine performance as the paranoid upperclassmen Yong-suk, adding a level of villainy to the flick.

This is a zombie movie, though, so I guess we have to talk about the monsters themselves, which are great. They didn’t go for anything out of the ordinary here but instead blended together two types of modern zombie that have worked effectively in the past. The creatures featured here are more or less a hybrid between the infected in 28 Days Later and the zombies from World War Z. They are fast, vicious, and keen on swarming like locusts to get to what they want. Their raw intensity is absolutely terrifying and adds another level of thrilling suspense of the entire story.

Typically when talking about a horror film that runs nearly two hours it is pretty simple to pick out one or two unnecessary things, or some fat that could be trimmed. There is nothing unnecessary in this movie, there is no fat and you won’t be able to take your eyes off the screen for the entirety of it. Train to Busan is a purely intense horror thrill ride that I urge every fan to take. I welcome any amount of new zombie movies that are going to operate on the level of Sang-ho Yeon’s masterful work here because horror movies don’t get much better than this.