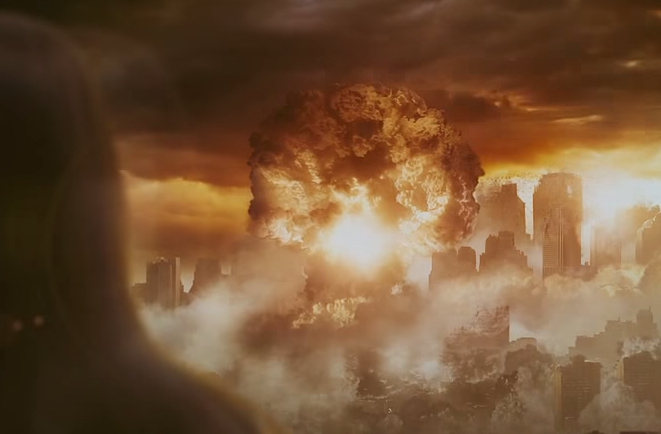 It’s time to take a look at another very real phobia, and list some of the movie moments that could cause sufferers some genuine distress!

We started with Coulrophobia (Fear of clowns). Then we looked at Ommetaphobia (Fear of eyes and eye damage). And now we arrive at Nucleomituphobia – which is basically this …

People who suffer with this phobia will sometimes have a bomb shelter constructed in their homes even if the possibility of nuclear warfare in our times now is very unlikely. They will show symptoms of anxiety when faced with pictures or movies about nuclear weapons, nuclear warfare and civil unrest. Some may opt to stay indoors for fear that nuclear weapons will be launched into the sky at any moment.

It goes without saying that this is a fear many of us probably have or HAD on some level, you would have to be insane to not be bothered by the idea of a global nuclear conflict! But for a select few it can be an intense and constant fear that they will try to avoid thinking about at all times. My Father worked with a man many years ago who suffered from this very phobia, and he would become extremely agitated the moment a TV programme or movie even hinted at a possible nuclear war scenario.

Many films over the years have taken this fear of nuclear weapons detonating and created stories built around or featuring such an event. Some are better than others, but they all have one thing in common – when the bombs drop they don’t hold back! Mushroom clouds became a hauntingly regular sight in movies thanks to the cold war era, and here are ten examples of the most damaging and disturbing!

T3 is a solid but unspectacular movie which plods along until it reaches a surprisingly dark and sombre finale that many didn’t see coming. Just when it seems everything will be ok, John Conner (Nick Stahl), and Kate Brewster (Claire Danes), discover that Judgment Day wasn’t stopped in T2, it was only delayed. Countless missiles are launched across the globe, and the future Conner was always prepared for finally arrives.

Boy meets girl. Boy and girl instantly fall in love. Boy inadvertently takes a phone call telling him a nuclear war is about to start – I’m sure we’ve all been there.

Don’t be fooled by the lighthearted vibe this movie has in the early stages, because Miracle Mile very swiftly becomes an intense look at the chaos that could erupt when the population of a city discovers annihilation is on the way. You really start to care about the characters and hope they will make it out of the insanity safely, but happy endings and nuclear weapons rarely go together.

So you spend a night surviving toxic gas, acidic rain and brain munching zombies – how can things possibly get any worse? Well, you could also call the military in the hope they will swoop in and save the day, only to discover that their idea of assistance is to NUKE your location, making all of your survival efforts ultimately pointless. Now that’s some shitty luck!

The Divide begins where many movies would end, with total nuclear destruction! At the very start we find Eva (Lauren German), staring blankly out of a window as Manhattan is totally obliterated due to an unexplained and mysterious attack.

Along with her boyfriend and several other residents she manages to find shelter inside a reinforced basement under her apartment building, but it soon becomes clear that succumbing to the horrors of what happened on the surface might have been preferable to the claustrophobic insanity that awaits them all below.

When the residents of Ogden Marsh, Iowa start acting aggressively toward each other for no clear reason, town sheriff David Dutton (Timothy Olyphant), discovers the unusual behaviour is linked to a crashed military jet and its mysterious cargo that appears to have contaminated the local water supply. As the infection spreads, the town descends into chaos which is only worsened by the arrival of armed troops ordered to stop the outbreak by any means necessary.

Dutton and his pregnant wife Judy (Radha Mitchell), ultimately escape the area with only seconds to spare, as the military decide the best solution is to destroy the entire town with a very large nuclear strike! (Must be the same guys from Return Of The Living Dead!)

I’m cheating a bit with this entry because it isn’t from a movie or even a TV drama, but if there was ever a broadcast that would strike utter terror into the very soul of someone who fears nuclear conflict, it is this!

On the morning of June 17th 2007, hackers tampered with the live feed of a Czech television programme called ‘Panorama’, which displays peaceful panoramic shots of Prague and other idilic locations around the country. The hackers spliced in their own footage which after a few moments of looking perfectly normal suddenly contained a bright flash followed by a CGI nuclear cloud. They even remembered to add some EMP static and picture distortion a few seconds later to make it all seem even more authentic! Mild panic ensued, and dedicated Panorama viewers all across the country were swiftly picked up by mental health experts to begin intensive counselling sessions.

Special Bulletin is an unnerving made-for-TV movie that delivers its story through simulated/fake news reports from the fictional RBS television network.

As events unfold, we discover that a small boat docked in Charleston, South Carolina has been seized by a domestic terrorist group who claim they have constructed a crude nuclear device that they will detonate unless certain demands are met by the Government. Reporters arrive on the scene to cover the incident with a ‘live’ broadcast, and just when it seems the President has agreed to cooperate, a commando team stealthily boards the ship and kills all but one of the terrorists.

A news camera is placed within the ship to record what everyone assumes will be a routine procedure to defuse the device and end the crisis, but as the presenters in the studio conduct an interview with a nuclear expert, the bomb disposal team can be seen starting to panic on the live feed which suddenly goes blank. When contact is restored we discover that the weapon exploded, and Charleston has been left in ruins.

James Cameron isn’t the sort of man who would feel the need to shy away from showing the devastation a nuclear attack could cause, and that was never more evident than during the dream sequence Sarah Conner experiences toward the end of T2.

Los Angeles is silhouetted against a terrifyingly large mushroom cloud, buildings are vaporised, skin is ripped from bone, and a playground full of children and their parents instantly combust before being reduced to ash by the powerful shock wave that arrives seconds later. Despite being 23 years old the effects have aged very well, and this scene remains one of the most disturbing nuclear blast moments ever created for a film.

I’m going to skip having an entry at number two because in my personal opinion the number one spot needs to be jointly occupied by both of these uncompromising and incredibly powerful TV movies. They present nuclear war and the aftermath of such an event as the ultimate horror it would almost certainly be should it ever actually happen.

The characters are all regular people leading normal lives, and the political events unfolding across oceans and thousands of miles away are at the back of their minds and totally out of their control. When the bombs eventually fall it is sudden, apocalyptic and irreversible. The world they knew is gone forever, and for most of the survivors radiation sickness and slow death is all they have ahead of them.

I wrote much more about Threads here – and if you’ve never seen either of these movies I strongly urge you to do so.

Did I miss any scenes you personally think should have made the list? Drop a message below and let me know.