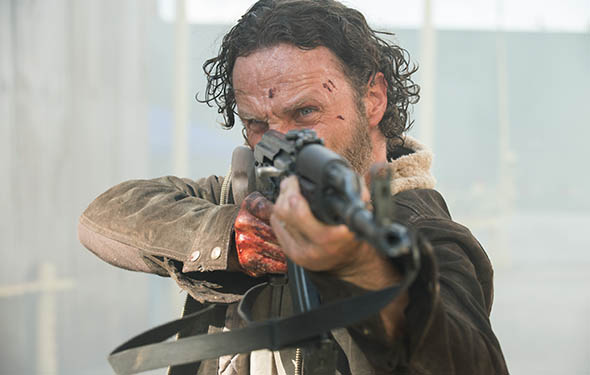 These are just a handful of things we’ve come to expect from The Walking Dead, the reigning king of horror television whose feet, perhaps now more than ever, all of us fans should be bowing before and kissing.

Because all of these things were packed into Season 5’s premiere episode, and holy shit was it awesome – the perfect representation, in many ways, of what The Walking Dead is all about.

How do you kick off a new season of the most popular show on TV? Well, ‘No Sanctuary’ was a pretty damn fine ‘how-to’ guide for doing just that…

Intensity was the name of the game right from the get-go, as Rick, Daryl, Glenn and Bob were split from the rest of the group, violently removed from the train car and brought into the bloody heart of Terminus. Lined up like cattle, our heroes were paired up with others who arrived at Terminus under false pretenses, each of those nameless characters brutally executed right before their eyes – and ours.

We’ve seen some pretty disturbing shit go down on The Walking Dead over the years but few scenes compare to the sheer horror of last night’s Terminus executions, carried out via a baseball bat to the back of the head and then a slice to the throat. Viscerally disturbing is how I’d describe the episode’s opening moments, letting us know right off the bat that Season 5 is going straight for the jugular.

After the four unnamed prisoners were executed, Rick, Daryl, Glenn and Bob managed to avoid the one-two punch of bat and knife, thanks to a well-timed explosion that shook Terminus to its very core. Moments later, we were shown that it was Carol who was responsible for the life-saving explosion, firing a shot into a fuel tank on the grounds – and having no idea just how crucial that power move was.

Zombie Kill of the Week: Surrounded by zombies, the fuel tank explodes and sends dozens of them flying into the air, re-killing many and turning others into flaming walkers. You go, Carol!

While Rick and the gang’s lives hung in the balance over in Terminus, Carol and Tyreese (plus baby Judith) dealt with their own problems a stone’s throw away, kidnapping one of Terminus’ own and finding themselves unsure of what to do with him. While Tyreese stalled, the man got the upper hand on him, threatening to kill Judith if Tyreese didn’t head outside and essentially sacrifice himself to a hungry horde of walkers, in exchange for Judith’s life.

Though Tyreese reluctantly agreed to the deal, it wasn’t long before he came bursting back through the door on a revenge mission, killing the man and saving Judith. It seems Tyreese has finally realized that he’s going to have to start embracing his dark side if he has any chance of surviving and protecting his people, making peace with the fact that this means killing both zombies and humans.

Of course, Tyreese carried out the dirty deed almost entirely off-screen, so whether or not he actually killed the dude is up in the air right now. But here’s to hoping he didn’t make the wrong decision.

Carol, cloaking herself in zombie guts (a nice call-back to Season 1), was off on her group-saving mission while Tyreese chatted it up with the dude he may or may not have killed, proving that she has become a complete and utter badass – the female Daryl Dixon, if you will.

After blowing up the fuel tank, Carol bravely ventured inside Terminus and came face-to-face with Mary (Denise Crosby), who spilled some back-story on the place. According to her, Terminus was once the sanctuary it was advertised as, though unwelcome invaders essentially forced the people there to choose between being the cattle and being the butchers – and, of course, they chose to become the butchers.

Taking little pity on Mary, Carol shot her in the leg and left her for dead, opening a door and allowing a horde of walkers to come inside and turn her into a hot lunch. Mary’s story was later confirmed to be true in a quick flashback scene, where we saw her and Gareth being tossed into a train car by a hulking brute. It seems Gareth will become a main character this season, and it will be interesting to see if he continues to be evil or can get back in touch with his good side.

Using the fuel tank explosion as a distraction, Rick, Daryl, Glenn and Bob got the upper-hand on their Terminus captors, brutally murdering them and then launching an all-out assault on anyone and everyone – zombie or human – on the premises. Arming himself with a high-powered assault weapon, Rick once more asserted himself as the badass, take-no-prisoners leader, mowing down everyone and everything in his path to safety.

After freeing the other members of the group from the train car, the gang reunited with Carol, Tyreese and Judith, providing the episode with one of The Walking Dead‘s patented ‘all the feels’ moments. Rick embraced Judith while Daryl embraced Carol, the latter of whom was reintegrated into the group by Rick, who finally realized something we all knew; Carol ALWAYS has the best interests of the group in mind.

In a post-credits sequence, at the very end of the episode, we saw that Season 1 & 3’s Morgan Jones is still alive, headed to an unknown destination for his own slice of sanctuary. Can’t help but wonder if his story will be picked up in the impending spin-off series, or if he’ll be re-integrated back into the main show. Only time will tell.

One other thing worth mentioning about the episode is that Eugene outlined his plan to save the world, revealing that he was a member of the Human Genome Project – a group of scientists that developed ways to instantly wipe out all of humanity, if need be. He thinks that by flipping the script, he can use those same means to wipe out all dead things, thereby ridding the world of walkers.

Anyone else love Eugene, and the way that he seems to belong in a different show than everyone else?

Only one hour into Season 5 and it’s already clear that The Walking Dead is not only back but also better than ever. If the premiere is any indication, we’re in store for the most intense and action-packed season we’ve yet seen, and I fully expect Season 5 to push the boundaries of what’s acceptable on TV.

Hell, it already has, and we’ve only just begun. Ridiculously high ratings are the rock to censorship’s scissors, and only good things can come of that, for us diehard horror fans.

If The Walking Dead had feet, I’d be kissing them right now. And I’d encourage you to do the same.