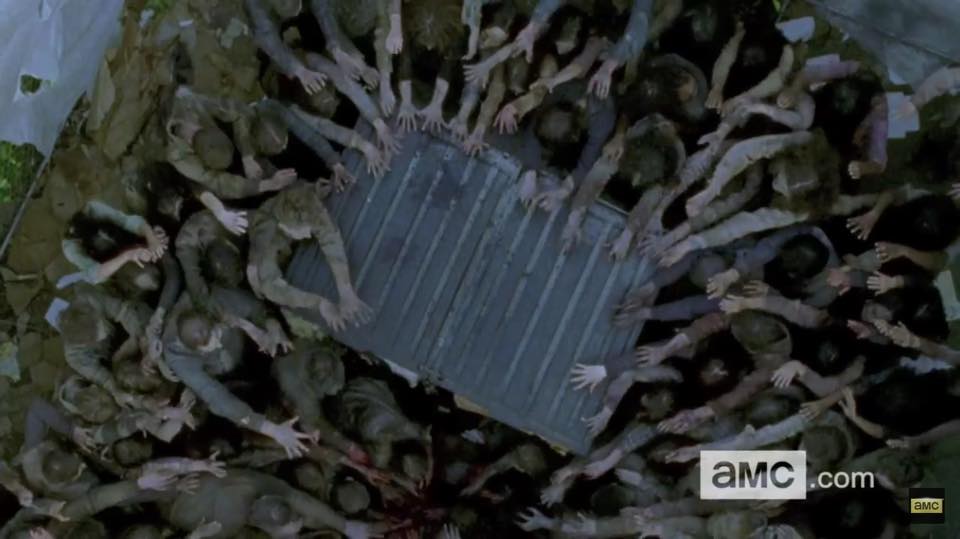 This past Sunday night’s episode of The Walking Dead, titled ‘Thank You,’ has spawned no shortage of internet discussion in the past couple days, mostly in regards to a major character death that nobody expected. If you haven’t yet seen the episode, I can guarantee you that this post will be loaded with spoilers, so I strongly encourage you to stop reading and come on back once you’ve checked it out.

You have been warned!

The sixth season of The Walking Dead has been focused on the group’s efforts to divert a massive horde of walkers away from Alexandria, and a handful of characters – mostly minor ones – have lost their lives helping to achieve that goal. In ‘Thank You,’ another secondary character proved that the community’s original residents aren’t cut out for this world, and then tragedy struck the show in a major way.

Separated from the group, Glenn and Nicholas found themselves surrounded by walkers, seeking refuge on top of a dumpster. Looking down at the hungry mouths, Nicholas realized he couldn’t go on any longer, and after thanking Glenn for taking him under his wing, he committed suicide. As his body fell to the ground, Glenn was dragged down with him, and he seemed to have been torn apart by the zombies.

Not only was Glenn’s death completely out of nowhere, but it was also executed in a decidedly casual fashion, in contrast to previous main character deaths on the show. Held up against the fairly epic swan songs of characters like Hershel, Shane, and Dale, Glenn’s demise felt like a throwaway death scene befitting a character much less beloved than him, and if you’re asking me, that was the brilliance of it.

As I mentioned here on HL earlier this year, The Walking Dead has long been in need of a shocking main character death, as it’s begun to feel like there are certain characters who are completely immune to the zombie apocalypse. When characters die, they’re often relatively minor ones, and when major players do meet gruesome ends, their deaths are often telegraphed to the point of being highly predictable.

Glenn’s death, however, was an entirely different beast altogether, serving as a shocking and utterly heartbreaking reminder that NOBODY is safe… EVER. Unlike the aforementioned characters, there were absolutely no warning signs indicating that Glenn’s time was almost up, and I’d argue that by killing such a major character off with such little fanfare, The Walking Dead instantly became a better show.

In the wake of Glenn taking his final breaths, the show immediately felt more dangerous and palpably terrifying than it has in a very long time, hammering home a much-needed reminder that the slow-moving zombies are as much of a threat as the series’ many villainous antagonists. Rick and friends are often dispatching walkers with relative ease, and it’s often easy to forget that they’re formidable foes.

It’s a huge bummer that Glenn is no longer with us, but his unexpected death also bolstered the theme that Alexandria’s residents are much weaker than Rick and friends – and therefore pose a whole different threat to the group. Glenn is the latest in a long line of characters to die as a result of their weakness, proving Rick’s point that there isn’t much room for humanity in the zombie apocalypse.

Another brilliant aspect of Glenn’s death was the placement of it, coming just three episodes into the show’s new season. We’ve recently become accustomed to major things only going down in finales, either mid-season or end-of-season, and by hitting us over the head with something so traumatic and ballsy in a random episode early in the season, the stakes have been raised for ALL subsequent episodes.

Going forward, it feels like anything can happen to anyone at any time, and though you may be disappointed that Glenn didn’t get a final goodbye or a fitting end-cap to his story, I can’t think of another character whose death helped change The Walking Dead in such a major way. Like it or not, it was precisely what the show needed, shattering the feelings of safety provided by Alexandria and taking the series to a new level.

You can be mad at the writers for killing off Glenn, but what you’d really be getting mad at is great television. When your heart is broken over the loss of a character, that’s when The Walking Dead is at its absolute best. And if the first three episodes are any indication, the show’s sixth season may be its finest to date. It’s firing on all cylinders, and for the first time in a while, I’m afraid to see what happens next.

*Before anyone comments and criticizes this post, I must point out that I’m well aware of the possibility that it was actually Nicholas’ body we saw the zombies tearing into, suggesting that Glenn is still alive. No matter how this all pans out, my sentiments written here remain the same, and I sincerely hope they don’t play that sleight of hand trick on us. That would be pretty cheap, and the show is quite frankly better than that.