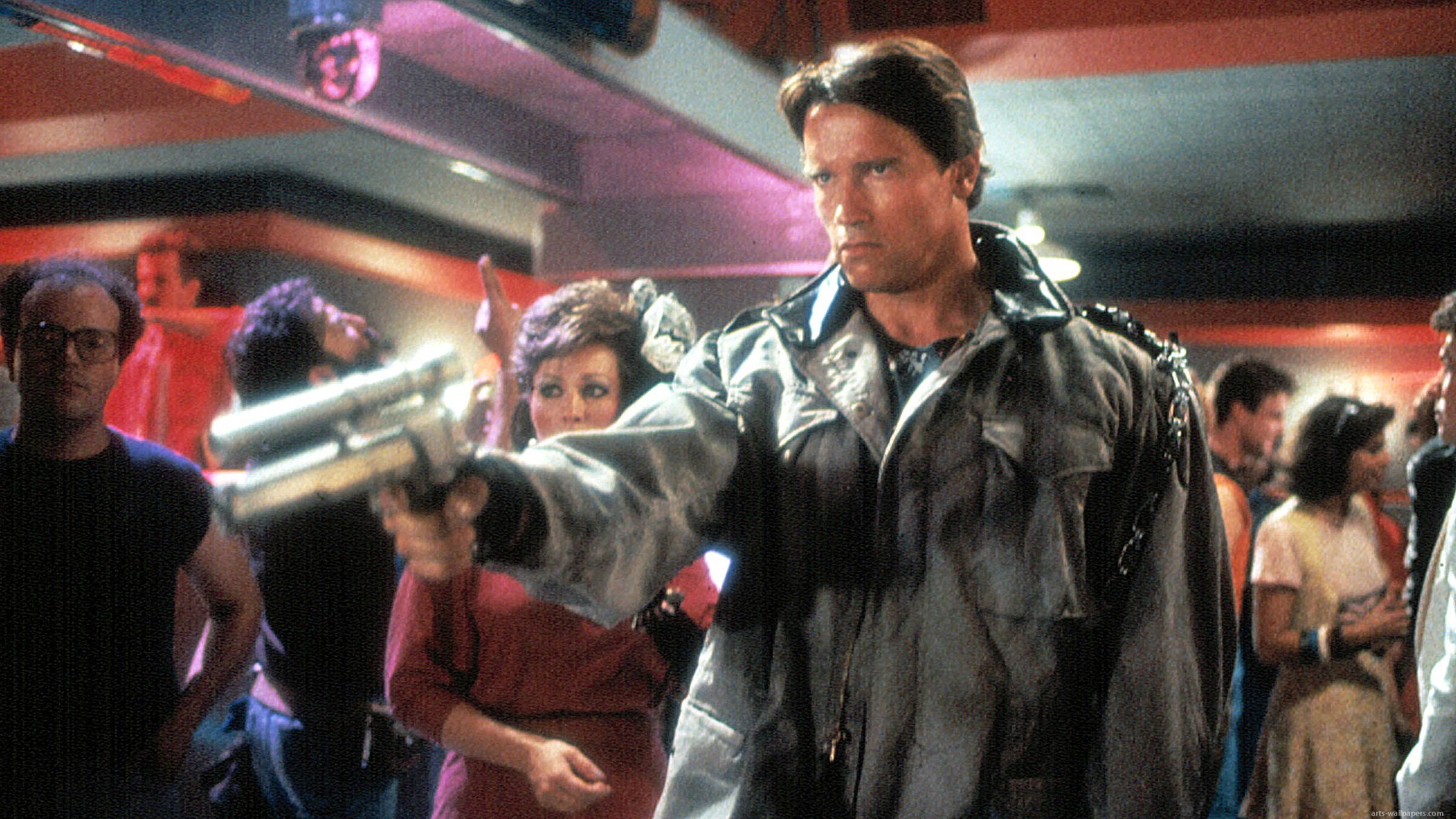 James Cameron’s Terminator franchise gets a fifth installment this week in the form of Terminator Genisys, which has a plot so confusing that I honestly can’t even keep track of what’s happening in the two-minute trailer. At this point, the franchise is such a mess that I’m not sure I’ll even bother heading out to my local theater to see it, but I was compelled this week to at least revisit Cameron’s original film.

Though it spawned a muddled and highly confusing franchise, The Terminator is actually a very simple movie. In so many words, it’s about a woman who’s being pursued by a relentless killer and the man who’s trying to save her life, and though there’s a much grander story at play about time travel and robots destroying humanity/taking over the world, the film’s plot can be boiled down to that core idea.

And when you strip away The Terminator‘s sci-fi fluff and fully expose its skeleton, one thing becomes immediately clear: it’s a well-disguised 1980s slasher film, through and through.

James Cameron has over the years made no secret of The Terminator‘s horror inspirations, and his famous origin story for the film suggests that the idea came to him in a scary fever dream. Sick in Rome, right around the time his directorial debut Piranha 2: The Spawning was released, Cameron dreamt of a metallic creature dragging itself away from an explosion, armed with knives and coming toward him.

As Cameron has noted, the imagery of the dream felt like it was ripped straight out of a slasher film, and he has even mentioned being heavily inspired by John Carpenter early in his career – particularly Carpenter’s debut effort, which was of course Halloween. In so many words, Cameron wanted to make his own version of Halloween, and the creepy dream was the catalyst for bringing that vision to life.

Production on The Terminator began in early 1983, at a time when the horror genre’s slasher boom was in full swing. Halloween 3 had just come out and Friday the 13th was also up to its third installment, along with a never-ending stream of similar films inspired by those two hit franchises. And the slasher-heavy landscape of genre cinema at the time is very much evident in Cameron’s action sci-fi classic.

For starters, Arnold Schwarzenegger’s titular character is more or less Michael Myers with a leather jacket and a cool pair of shades. A relentless killing machine who never stops, no matter how much damage you do to him, the Terminator is a villain ripped straight from the Slasher 101 handbook, right down to wearing a mask to hide his monstrous face and always being armed with a trademark weapon – in this case a gun, rather than a knife.

Much like Michael Myers and friends, the Terminator brutally kills anyone in his path, punching through stomachs and blasting holes into an endless array of innocent victims, all the while expressing no human emotion whatsoever. Though he appears to be human, he’s truly a monster who is only interested in leaving a body count in his wake – and he doesn’t care who you are, or how he has to go about achieving that goal.

Just listen to Kyle Reese’s explanation of the character, which suitably describes all the great horror icons…

There’s one particular scene where the film wears its slasher inspiration proudly on its sleeve. On the hunt for Sarah, the Terminator barges into her apartment, where Sarah’s roommate and boyfriend have just finished making love. While the boyfriend sleeps, Sarah’s roommate heads off into the kitchen to make a sandwich, and the Terminator massacres both in a way that would make Jason Voorhees proud.

If Arnold Schwarzenegger plays The Terminator‘s horror villain than that makes Linda Hamilton’s Sarah Connor the so-called final girl, and it’s a box she tends to fit neatly inside. Like Laurie Strode and Alice Hardy before her, Sarah Connor is an ordinary woman thrust into an extraordinary situation, forced to get in touch with an aggressive and badass side that she had previously been unaware she even had.

Like all good final girls, Sarah Connor goes through her heroic change when she fully embraces her role as chosen hero and saves Kyle Reese from certain doom toward the end of the film, subsequently finishing off the Terminator once and for all. You can see the moment she finally wields the power we know she has, that moment calling to mind Laurie’s attack on Michael and Alice’s decapitation of Mrs. Voorhees.

In the end, Sarah Connor is the sole survivor of all the bloody mayhem, successfully vanquishing the bad guy and walking off – or in this case driving off – into an unknown future, changed forever by the events of the film. Hamilton’s character is in many ways the quintessential final girl, embodying almost all of the characteristics shared by the iconic female horror characters that fall under that umbrella.

Of course, the Terminator franchise shed its horror inspirations for the sequels, but the 1984 original that started it all is unquestionably a film that owes a huge debt to the slasher craze that was going on at the time. It’s a science fiction movie and an action flick, perhaps first and foremost, but underneath it all is an elevated slasher film that plays around with all the tropes and formulas of the sub-genre.

So while you’re out at your local theater this weekend, enjoying Terminator Genisys, keep in mind that the franchise likely wouldn’t exist if it weren’t for icons like Michael Myers and Jason Voorhees paving the way, and inspiring a young filmmaker to take that slasher ball and run with it. Well, don’t blame them for the series’ not-so-great installments, but at least thank them for the original classic.

Despite some dated effects toward the end, The Terminator is still as badass as it ever was.