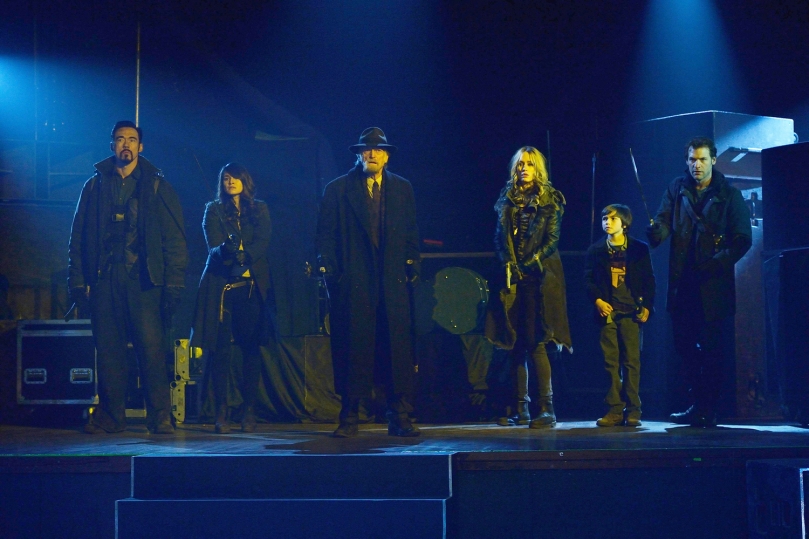 It feels like just yesterday that a plane full of undead passengers landed in New York, and long-tongued vampires began ravaging the city. And yet, it was nearly three months ago that The Strain premiered on FX, the show wrapping up its inaugural season with last night’s 13th episode.

Throughout the course of the season, The Strain has always managed to do enough to make each episode entertaining and leave me wanting more, and that was precisely the M.O. of its very first finale.

In the Season 1 wrap-up, aptly titled ‘The Master,’ the name of the game was setting up for the future more than it was delivering any real payoff. As such, not all that much really happened, though each of the show’s main storylines were left off on cliffhangers that are sure to make Season 2 a super-charged version of Season 1.

The episode kicked off with the reveal that Eldritch Palmer was not turned into an immortal vampire by The Master, as he thought, but rather was temporarily given his health back. This disappointing bit of news was revealed to him by Eichorst, who informed him that continued loyalty to The Master will eventually result in the immortality that he seeks.

After his right-hand man finally worked up the courage to leave his side, upon realizing that he’s working for one evil son of a bitch, Palmer barged into the CDC with Eichorst, in an effort to obey The Master’s orders and ensure that the city wasn’t quarantined. To achieve this goal, Palmer fully embraced his dark side and threw the CDC’s Secretary of Health off the side of the building, to her death.

Elsewhere, our group of brave heroes re-formulated their plan to hunt down and kill The Master, after failing to complete the mission a couple weeks back. Eph and Vasiliy grabbed the proverbial bull by the horns and tracked the uber vamp to goth rocker Gabriel Bolivar’s Tribeca hideout, where they discovered that his coffin was being rebuilt.

Equipped with this knowledge, the two headed back ‘home’ to rally the troops, though Eph wasn’t so sure if he should leave his son behind or bring him into the belly of the beast. After some words of encouragement from a devastated Nora, Eph realized that he had to keep his son close and protect him, finally making peace with the fact that Zack needs to start learning how to kill vampires.

I’ve compared The Strain to The Walking Dead several times throughout the course of the season and that comparison has been strongest when it comes to Eph’s family life. Like Carl Grimes, Zack Goodweather is being forced to grow up a whole lot faster than his father wants him to, and that process began in the finale when Setrakian gifted him with a sword – which Eph reluctantly taught him how to use.

Armed with weapons and ready for a fight, Eph, Vasiliy, Setrakian, Nora, Dutch and Zack headed off to Bolivar’s lair, where they encountered a few dozen ‘security guard’ vampires. All out war ensued, as heads were cut off and brains blown out. Amidst the chaos, Setrakian came face-to-face with The Master, while Vasiliy tangled with Eichorst.

After smashing all the windows in the building, Eph and Setrakian got the upper-hand on The Master, who was weakened by the sunlight pouring in. The Master managed to knock Setrakian to the ground and Eph was able to push him out of a window, where it seemed like the sun was going to drain the last bits of life out of him.

Much to the surprise of Eph and Setrakian, the sun weakened The Master but didn’t kill him, and in a blaze of questionable CGI he crawled down the building and once again escaped their grasp. As The Master retreated, so too did his red-eyed minions, who eerily walked backward and were drawn away from the fight with Fet and the gang.

Feigning an asthma attack, Zack was able to convince his dad to head back to their home on the hunt for inhalers. As expected, Eph’s ex-wife/Zack’s mother wasn’t far behind, the two coming face-to-face with an undead version of their loved one. Eph fired a shot at Kelly which shattered the glass she was standing behind but didn’t hit her, and she fled the scene.

After the traumatic event, Eph fell off the wagon and poured himself a glass of liquor, which he quickly sucked down. It’s all becoming too much for the show’s main character to handle, and we can expect that Eph will be going full Rick Grimes next season.

As for Gus, he found himself tied up to a chair in the mysterious Quinlan’s lair, and it was revealed that the badass vampire wants to recruit him, rather than harm him. Attempting to run away, Gus found himself in a room where three stone-like vampires were sleeping, which Quinlan informed him were ‘The Ancients.’

The Master broke an ancient vampire truce, Quinlan explains to Gus, and he and his men are getting set to go to war with him. They want Gus on their side, and after promising a whole lot of money in exchange for his troubles, as well as the chance to get revenge on Eichorst, Gus agreed to align himself with the mysterious band of mercenaries.

As the episode came to an end, our heroes drove off into next season in the bread truck, leaving a burning New York City in the rear-view.

It was hard not to be disappointed by The Strain‘s Season 1 finale, as it suffered from something all the most disappointing season/series finales do; it felt like just another episode, rather than the special hour of television that we all expect finales to be. On top of that, the pursuit of The Master felt pretty repetitive, rendering the episode a whole lot less entertaining than it by all means should’ve been.

But again, the aim here was clearly to set up an exciting second season, rather than end the first on an exciting note, which I suppose I can live with. That said, The Strain has very much been a tease of what’s to come, throughout the entire season, and I can admittedly foresee myself losing interest somewhere down the road, if those payoffs remain as elusive as they’ve been. So here’s to hoping things start to really heat up, next year.

In a season comprised of a select few great episodes and a handful of serviceable ones, the finale found itself somewhere in the middle, getting the job done while ultimately disappointing. Like even the worst episodes of Season 1 managed to, the episode nevertheless left me anxious to see what’s next, so I guess I can’t complain too much.

The Strain‘s first season proved itself to be a sufficient Sunday night filler before the return of The Walking Dead, and though I certainly wouldn’t put both shows on the same level, I was entertained and engaged enough throughout to consider FX’s attempt to reel in the Walking Dead audience a successful one. At this point, I’m hooked, and totally on board for whatever is next.

Above all else, The Strain has been fun, and I look forward to many more Sunday nights filled with long tongues and colorful characters. It’s rare that I stick with a show for an entire season, and even rarer that I’m looking forward to the next one, so the fact that The Strain managed to tick off both of those boxes says to me that the first season did a whole lot more right than it did wrong.

Weekly recaps of The Strain continue sometime in 2015. See ya then!