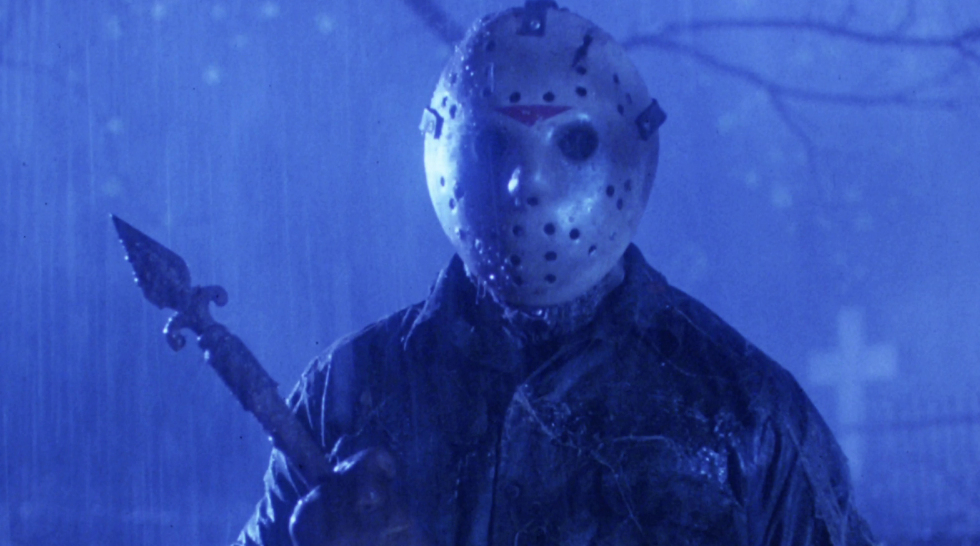 To celebrate the journey toward Halloween 2014 I’m going to do something I’ve wanted to attempt since I first started writing here on Halloween Love … put together a definitive list of my personal favorite horror movie moments and scenes.

I hope you will agree with some, maybe raise an eyebrow at others and fingers crossed a few will be pleasant surprises.

Tommy Jarvis (Thom Mathews), makes one of the biggest mistakes in horror movie history when he decides to exhume our favorite hockey mask wearing killer, and inadvertently brings him back to life thanks to a moment of anger and a very badly timed lightning strike. Covered in maggots and filled with rage, Jason Voorhees has become an undead monster, ready to continue his work and make Mom proud.

Jason Lives is probably my favorite Friday. I love all of them for various reasons but the sixth instalment of the franchise just seemed to raise the bar, and of course it gave Jason back to the fans by basically turning him into a zombie. The first actor chosen to (mostly) bring a rotting Jason to the screen was C.J. Graham … Towering and powerfully built he was a perfect choice who brought something truly memorable to the role and the movie.

I recently had an opportunity to send some quick-fire questions to Mr. Graham, and I can’t think of a more perfect place to slot them in considering what my latest list choice has just been. He’s a very busy man and as always I really appreciated him taking a moment to zap back some cool little replies …

Halloween Love: Can you tell me a little bit about how you landed the part of Jason in ‘Jason Lives’?

CJ Graham: “Originally the part went to Bradley (Dan Bradley), because he was a stuntman. First daily came back, Mr. Bradley did not project the right image for the character, so the next day Paramount studios called me. Four days later I was on a plane to Georgia.”

HL: Do you remember the first time you were in full costume, on-set? … I’ve read comments from other actors who portrayed Jason over the years where they said it is a strange and powerful feeling to be fully made up that first time?

CJ: “Oh yes I remember feeling the impact of the transformation. Like a kid always wanting to be batman and wearing the costume, I wanted to be JASON.”

HL: For many people (Myself included), Part 6 is their favorite Friday. It has a real energy and impressive production values. Was it possible to tell something special was coming together while you were all making it?

CJ: “Director Tom Mcloughlin’s ultimate goal was to make something different, and with Jason Lives he was very successful.”

HL: What’s it like working under the mask and did it create challenges when you approached the stunt work?

HL: Is there one memory or moment from your time filming that you remember most fondly?

CJ: “That would be my very first scene with full makeup and walking toward the mobile home with the two kids inside of it.”

HL: Finally, what’s it like travelling to conventions and meeting passionate fans of all ages, that must be a wonderful feeling to know you are a big part of such a loved franchise?

CJ: “I am always amazed at the impact that the film gave to the audience. I feel very fortunate to have played this part and I really enjoy the conventions and meeting the fans. After all, it’s the fans that keep JASON alive.”