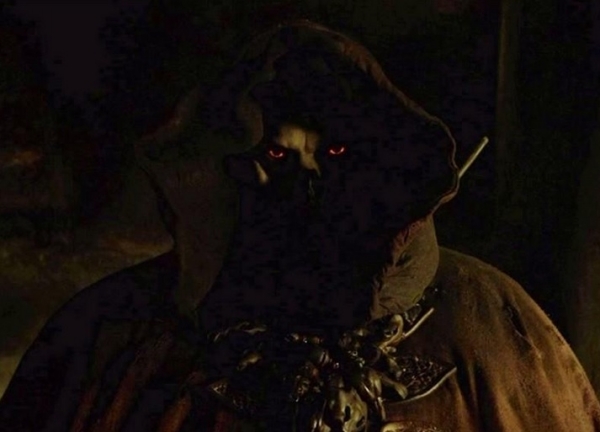 A great episode of a TV show is one that’s good not just as a standalone hour but one that also changes that show for the better, going forward. I can’t think of a more fitting way to describe The Strain’s eighth episode, which finally swapped out ‘shit is about to go down’ for ‘shit is most definitely going down.’

Over the weekend I was reading an interview with The Strain’s producer J. Miles Dale, in the latest issue of HorrorHound. “Our aspiration is to be the next Walking Dead in terms of viewers and what people say about the show,” Dale said in the interview, which totally made sense after having seen Episode 8.

In last week’s recap, I favorably compared the episode to The Walking Dead, as it brought most of the main characters together and forced them to hide from/do battle with the monstrous antagonists. Hell, nearly every character on the show even compares to one from The Walking Dead’s group of survivors, making it almost impossible to not draw such a parallel.

That Walking Dead vibe continued in last night’s ninth episode, titled ‘The Disappeared,’ which proved that The Strain is indeed a better show than it ever was before, in the wake of the previous week’s game-changer.

At the start of the episode, Ephraim’s young son Zach was dropped off at his mother’s house by a friend, but his mom was nowhere in sight. Instead, Zach was greeted by his infected step-dad Matt, who made several attempts to attach his monster tongue to the little boy’s throat.

Making a pit stop on the way to Setrakian’s pawn shop, our group of heroes showed up at the house just in time, and Ephraim was forced to decapitate his ex-wife’s boyfriend with a shovel – right in front of Zach. Well, I’m not sure ‘forced’ is exactly the right word, as Eph seemed to get some semblance of enjoyment out of the slaying, but I suppose you can’t fault him for that.

While the rest of Episode 8’s survivors (Setrakian, Vasiliy and blonde-haired hacker Dutch – with Zach in tow) drove off to the pawn shop – where Nora’s angry mother was waiting for them – Ephraim and Nora stayed behind to completely destroy Matt’s headless body, setting fire to it out the lawn.

Again, Eph totally seemed to enjoy the total eradication of Zach’s step-dad, refusing to say any last words as his corpse was turned to smoldering ash. Rightfully so, he’s more concerned with his missing wife, who is either on the run, dead or something much, much worse. Well, he was actually more concerned with making sweet love to Nora, which again you can’t really fault him for.

Before seeking comfort in the pawn shop, Dutch was dropped off at her apartment, escorted inside by Vasiliy. After realizing that her roommate – who safely escaped the convenience store last week – stole her computer files, it wasn’t long before a stoner friend stopped by, revealing himself to be a vampire. Vasiliy saved the day by bashing his head in with a small hammer, and the two once again joined the others.

While at the pawn shop, Dutch revealed to Setrakian that she was the one who shut down all forms of modern technology, at the request of Eldritch Palmer and Eichorst. Setrakian respected her honesty and asked if she could reverse the damage she caused, telling her that it’s not too late to do so.

Setrakian also gave Zach some life advice and pumped Vasiliy up to kill The Master, encouraging him to leave his humanity at the door and become the badass killing machine we all know that he is.

We were also treated to a few more Setrakian flashback scenes, taking us back to 1940s Poland. We learned that Setrakian made a failed attempt to kill The Master one night, resulting in all ten of his fingers being crushed under the massive power of The Master’s grip.

We also found out how Setrakian was able to escape the Nazi internment camp, narrowly freed from imminent execution by the Allied forces. After the attack, Eichorst hid out in an underground bunker outside the camp, where we were shown the moment he was turned into a vampire by The Master.

In one of the most visually striking moments in the show’s brief history, The Master’s full form was finally revealed, including his nose-less face. He looked like a giant rubber Halloween decoration, but I can’t honestly say that I was turned off by that. In fact, that’s in many ways precisely the way I had imagined him looking, so you won’t find me complaining about the admittedly cheesy reveal.

In other words, it was more ‘that’s awesome!’ corny, rather than the kind of corny that makes you roll your eyes.

As I’ve mentioned in past recaps, the decades-spanning relationship between Setrakian and Eichorst continues to be one of the strongest aspects of the entire show. As evil as Eichorst is, Richard Sammel’s acting is so good that the character’s relative compassion for Setrakian bleeds through the surface at all times, adding an extra layer to their extended rivalry.

Like all great heroes and villains of fiction, it’s almost like they need one another in order for their lives to have purpose, and I’m so glad their past was delved into with the exceptional flashback scenes we’ve gotten throughout the last several episodes.

Elsewhere, Gus and his infected friend were transported in a van with a gaggle of other prisoners, which at long last provided the payoff to the infection that we had been waiting for. Gus’ friend unleashed his tongue on the two police officers, forcing Gus to unload two well-placed gunshots to his head – before running off into the night.

The scene wasn’t nearly as wild as I was hoping it would be, but it nevertheless infused some fun into a mostly character-driven episode.

Toward the end of the episode, Vasiliy left the pawn shop to gather supplies and Eph & Nora joined the rest of the group in Setrakian’s lair, Eph promising his son that he will never give up on looking for his mother.

In summation, ‘The Disappeared’ was the calm after the storm that was ‘Creatures of the Night,’ the writers smartly taking some time to focus on the characters, and their dynamics with one another. Though I can’t say they’ve done as good of a job as The Walking Dead has at making us truly care about those characters, the groundwork is being laid for those genuine connections, which is nice to see.

Here’s to hoping that last night’s episode was both the calm after the storm and the calm before the storm, if you catch my drift!