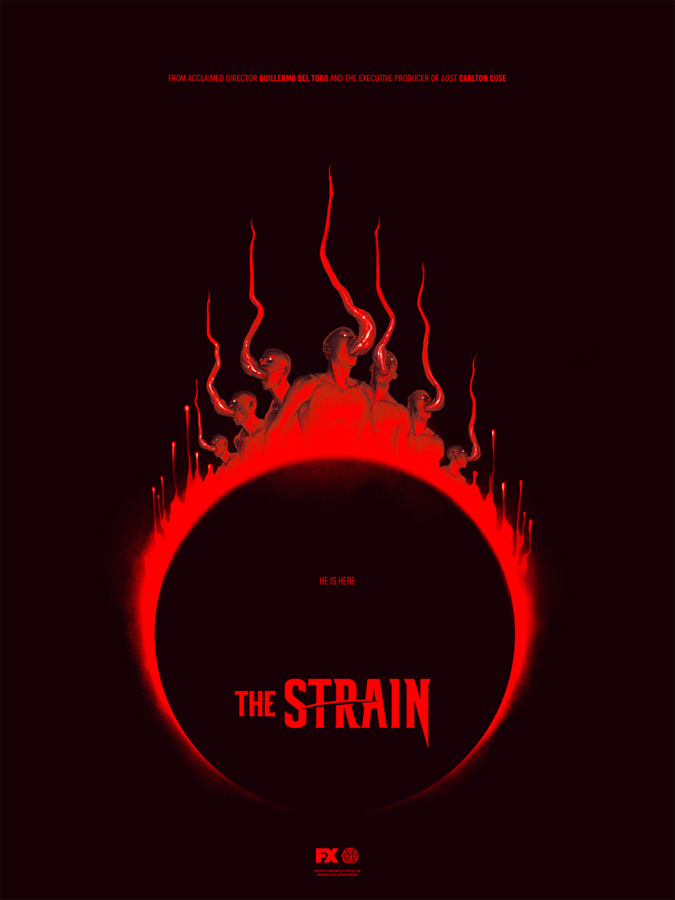 Through reading internet message boards and my social media feeds, I’ve picked up on the fact that the reaction to the first two episodes of The Strain was quite mixed, with many feeling that there’s just not enough crazy action to make the slower bits worth sitting through.

Remember when I said last week that all those who feel that way just need to be a little more patient? Well on this past Sunday night’s third episode, a dude’s dick fell off into the toilet. I don’t know about you, but in my mind, that means business has officially picked right the hell up.

The wait for The Strain to fully embrace its crazy, it seems, is all but over.

The aptly titled ‘Gone Smooth’ kicked off with a particularly awesome opening scene, showing us exactly what Thomas Eichorst really is. Underneath his human costume, it turns out, he’s a hideous fanged vampire creature with no nose, which he covers up with facial appliances as part of his morning ‘beautification’ ritual.

Eichorst spent much of the episode handling damage control duties, which began when he coerced Sean Astin’s Jim Kent into continuing being a mole inside the CDC. We learned that Kent’s wife has cancer, and was recently denied entry into a groundbreaking clinical trial, which the powerful Eichorst remedied under the agreement that Kent now has two bosses; Goodweather and him.

It was nice to see Jim’s character developed at least a tiny bit, because the last couple weeks he’s essentially been hidden in the background. For the first time he actually feels like a human being, rather than ‘CDC Underling #3,’ so that’s always a good thing.

After handling Kent, Eichorst next paid a visit to the head of the ill-fated airline at the center of the story, forcing him to blow his brains out with his own handgun. The idea behind the faux suicide was of course to perpetuate the idea that the disaster was the fault of the airline, rather than the start of the vampire epidemic that it truly is.

Elsewhere, Abraham Setrakian was released from jail, convincing the judge that he’s just a frail old man who barely knows what he’s doing. After failing to convince Nora that the bodies of everyone that was on the plane need to be completely destroyed, Setrakian took matters into his own gloved hands, paying off an amateur sleuth to come up with a complete list of every passenger, along with the names of family members they may have come into contact with.

The assumption here is that Setrakian is going to spend the remainder of the season going down the list and destroying everyone on it, which is a suggestion that has got me all kinds of excited about future episodes. Setrakian is my favorite character on the show, and I’m looking forward to seeing a whole lot more of him, as the weeks progress. After all, more Setrakian = better show.

Kevin Durand’s Vasiliy Fet once again proved himself to be a fun character in his second episode, eradicating a pest control problem in a swanky New York apartment. After removing the rat – which bit a young girl on the mouth – from the premises, Fet noticed hundreds more of the little buggers scurrying about the city. Like Setrakian, he was provided with his own laundry list of pests to destroy, which needless to say should be very entertaining to watch.

I don’t remember who it was but a friend of mine pointed out that Fet is essentially the Daryl Dixon of The Strain, meaning he’s the total badass who is likely to become a real fan-favorite. Can’t disagree with that comparison, as Durand’s presence has already injected a whole lot of fun and badassery into the series.

Much like Episode 2, the material with main character Ephraim Goodweather in Episode 3 was fairly uninteresting, serving to do little more than distract from the bigger story that should be the focus of the show. At the child custody hearing between Goodweather and his ex-wife, Eph’s son broke his heart by revealing that he’d rather just see his dad every once in a while, rather than have his time split between the two, which was of course not what he was hoping to hear.

To reiterate what I said in last week’s recap, I again felt like the scene was one that belonged in the first episode of the show, as it just feels out of place to devote time to Goodweather’s home life, when such major shit is going down in the city. Again, nothing wrong with character development, but I’d much rather see Goodweather as CDC badass, than absent father.

Much of ‘Gone Smooth’ documented the further decay of the plane’s four survivors, beginning with goth rocker Gabriel Bolivar. Using death metal makeup to cover-up his sickness, Bolivar eventually realized he couldn’t hide toward the end of the episode, wiping off the makeup in a scene that was reminiscent of the opening sequence with Eichorst.

His hair falling out and his eyes bright red, Bolivar next went full Brundlefly, with his dick literally falling off into the toilet, as he attempted to urinate. He nonchalantly flushed his penis down the toilet and then turned toward the camera, revealing that he’s now essentially become a human Ken doll – the vampires on the show are sex-less, it seems.

Though of course the penis wasn’t actually shown, it was nevertheless pretty wild to see such a scene on basic cable, as the implication of what was happening was quite clear. It was without question the craziest thing we’ve seen on the show thus far, and I can only hope it’s an indication of the sheer wackiness that will be on display throughout the season.

Going through a transformation of his own was Ansel Barbour, who’s beginning to exhibit the same symptoms as the other survivors. His eyes have gone red and he can’t tune out the loud ringing noises in his ears, but he’s desperately trying to convince his wife that everything’s okay. Ansel’s cover was eventually blown when his wife caught him drinking the blood from a slab of raw meat (#Awkward), and I predict it won’t be long before he starts drinking her.

And finally we’ve got Captain Redfern, who Goodweather was observing in the hospital, throughout the episode. Worms coursing through his face and body, Redford’s health was declining by the minute, and he eventually managed to escape his quarantine chamber and wreak a whole lot of hospital havoc.

At the end of the episode, Redfern’s transformation was all but completed, and Goodweather was forced to go Irreversible on him and bash his head in with a fire extinguisher. The scene admittedly had a weird low-budget quality to it, and it felt very rushed, but it was packed with some cool monster action and Goodweather finally got to be a badass, so it nevertheless capped off a fun episode on a high note.

Now three episodes in, it’s becoming quite clear to me that what I’m looking for from The Strain is not so much great characters or a great story but rather fun monster action, which is precisely what the show is beginning to bring to the table. At this point, the appeal is largely based on the ‘what kind of crazy shit is going to happen next week?!’ feeling Episode 3 left me with, and that’s totally fine with me.

The Strain is the kind of show that need not be a great piece of television to be a thoroughly entertaining slice of entertainment, and entertained is precisely what I’ve been thus far. Can’t ask for much more than that.

What say you? Have you been watching The Strain? And if so, are you enjoying it? Comment below and let us know!