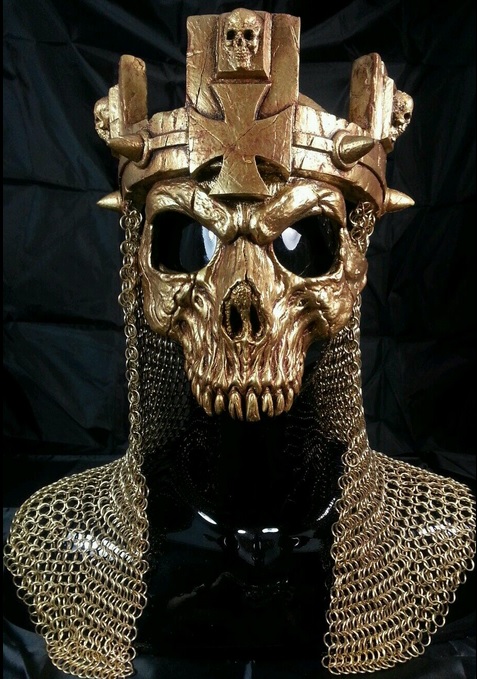 This past Sunday night was WWE’s 30th annual WrestleMania event, which is without question one of the most exciting days of every year, for wrestling fans like myself.

Even though I’m nearly 30 years old, WrestleMania night still manages to make me feel like a kid on Christmas morning, and this year’s incredible show was certainly no exception.

Why am I writing about a wrestling event on a horror blog, you ask? Well, I’m glad you asked.

Pro wrestling and horror have always kind of gone together like milk and Boo Berry, which is probably why so many wrestling fans are also horror fans, and vice versa. Wrestling evokes that same passion from fans that horror movies do and it’s not at all uncommon for wrestling characters or storylines to be ripped straight out of horror cinema, which is something I covered in depth over on FEARNET, last week.

WrestleMania 30 featured a few treats for horror fans, and the work of makeup effects master Tom Savini was even on display. Since I had a little chat with Savini earlier today about his awesome contribution to the event, I knew a WrestleMania post was just something I had to write up.

So now that I’ve justified the post – hopefully – let’s take a look at the horror highlights of WrestleMania 30, shall we?! 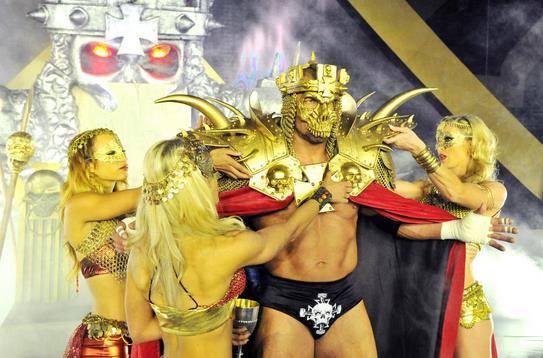 The first match of the night was between Chief Operating Officer Triple H and fan-favorite superstar Daniel Bryan, with the match marking the return to the ring of the former. Triple H has become known for his lavish entrances at the annual event and this year he donned a particularly badass gold skull mask, which was actually designed for him by none other than the Godfather of Gore; Tom Savini.

As it turns out, Savini is a big fan of professional wrestling and many of the WWE superstars are fans of his incredible contributions to the genre, and he actually designed the mask for Triple H a few years back, at WrestleMania 27. “Triple H already had a series of drawings of what he was after,” Savini told me, and the creation of the mask was a collaboration between him and fellow artists Gino Crognale and Jason Cartman Barker. He says that it was his good friend Jerry Lawler – who is a commentator for WWE – that led to him and Triple H working together.

This year’s WrestleMania mask was taken from the same mold as the WrestleMania 27 version, only painted gold this time around, rather than the silver one Triple H wore at that event. 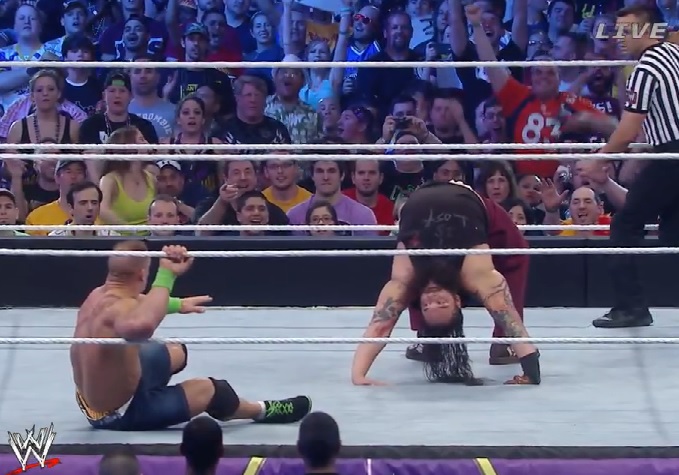 Later on in the night, John Cena went toe-to-toe with Bray Wyatt, the leader of a horror-inspired trio of wrestlers known as the Wyatt Family. Bray, Luke Harper and Erick Rowan (who wears a You’re Next-inspired lamb mask) are collectively one of the creepiest factions ever to step foot in the ring – bearded monsters who wouldn’t at all be out of place in a backwoods horror flick.

In the most unique match at the event, Bray continually tried to get inside the head of John Cena, and he was hellbent on making Cena embrace his inner monster, at one point handing him a steel chair and demanding that Cena knock him out with it. In the match’s creepiest moment, Bray shocked Cena by doing his best impression of Regan from The Exorcist, crab-walking his way into the nightmares of thousands of kids in the audience.

CLICK HERE to see a GIF of the creepy moment! 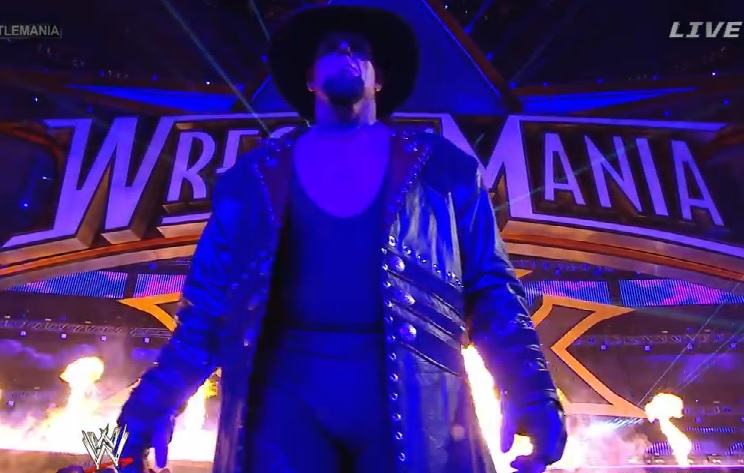 The most anticipated match of the night was between Brock Lesnar and the most successful horror-inspired wrestler of all time, The Undertaker. Going into the match, Undertaker was undefeated at WrestleMania, building up an impressive 21-0 winning streak over the course of the past couple decades.

Like Triple H, Undertaker is also known for his over the top entrances at WrestleMania and this year’s sure as hell did not disappoint. 22 caskets – including one for Brock – lined the stage as he entered the ring, each of them representing his many WrestleMania victims. All of them were lit ablaze as ‘The Dead Man’ made his slow walk to the squared circle, with the symbolic flames shooting up behind him.

In a shocking turn of events, Lesnar ended up defeating the nearly 50-year-old Undertaker, putting an end to his legendary streak and essentially killing off the Dead Man. The over 70,000 fans in New Orleans’ Superdome were stunned into silence for several minutes by the defeat, with their horrified faces telling the whole story. A WrestleMania moment none of us will ever forget, to say the least.

Do you love wrestling as much as horror, like I do? Feel free to comment below with your thoughts on these memorable WrestleMania 30 moments!