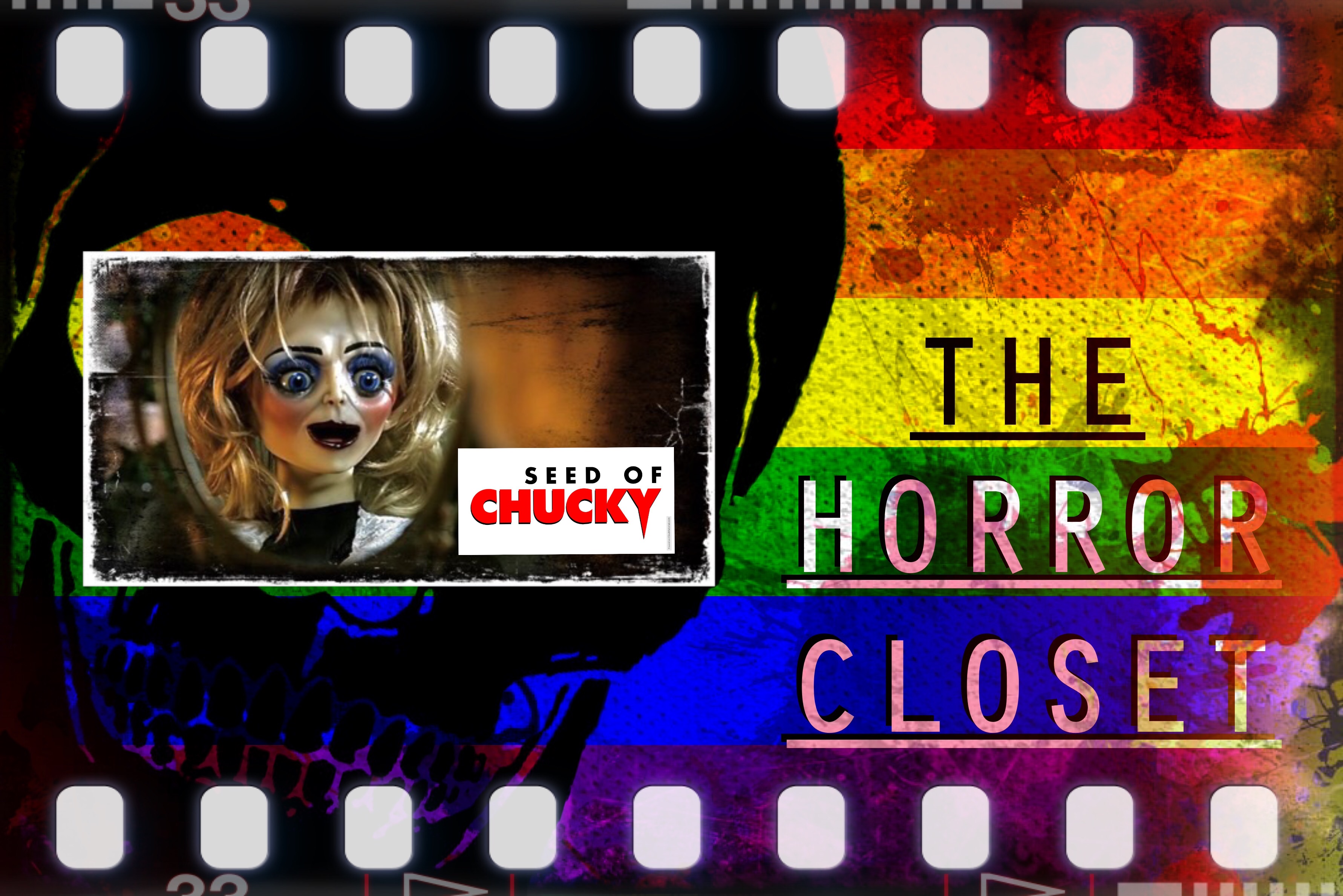 Today’s post was somewhat fortuitous. I had already planned to do a write up on Seed of Chucky when the news broke that Don Mancini (creator and writer of all the Child’s Play films and sometime director) was actively working on Chucky 7. An image posted by Mancini on Twitter reveals he’s already begun the storyboarding process, using a Glen doll as a Chucky stand-in.

As mentioned in The Horror Closet #1, I discussed my love of Scream and how that film sent me over the edge into becoming a full blown horror obsessive. Not long after, I was caught up on all of the major genre franchises: Nightmare on Elm Stree, Friday the 13th, Halloween. While I love them all for various different reasons, Child’s Play was certainly one of my favorites. Chucky the killer doll was a simple yet genuinely creepy concept.

A dying serial killer, played by the amazing Brad Dourif, transports his soul into the body of a rubber “Good Guy Doll”. He’ll be “your friend til’ the end”. Granted, if Chucky had it his way, your “end” wouldn’t be too far off. Through three films, Chucky’s mission was to take over the body of young Andy Barclay, to once again become flesh and blood. 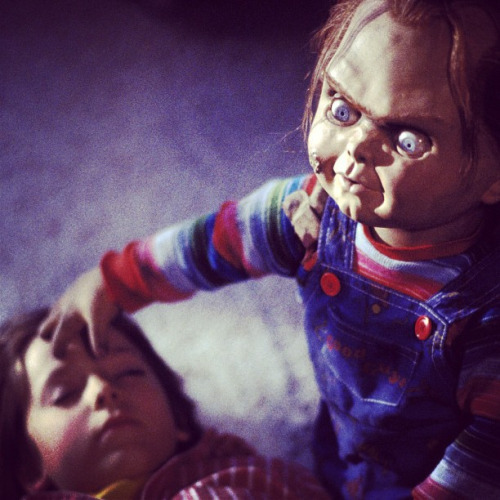 Bride of Chucky, released in 1998, took the franchise in a very different direction. As the title suggests, Chucky takes a bride, Tiffany, played with an unhinged romantic intensity by Jennifer Tilly. A lot of fans point to Bride as the series’ “jump the shark” moment. Things are played much more for laughs than horror. Personally, I love the film with it’s over the top plot, hilarious one liners, and the fantastic doll on doll sex scene. The consummation of their marriage pays off just moments before the credits start to roll; an infant with razor sharp teeth crawls out from between Tiffany’s legs. 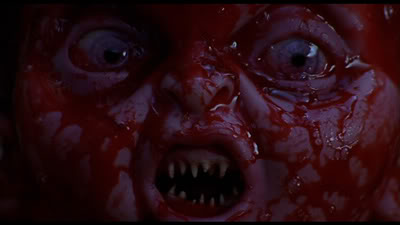 This shocking ending paved the way for today’s topic: the 2004 sequel, Seed of Chucky. When I first heard the plot details for Seed, I thought it sounded absolutely insane. I couldn’t believe that a major franchise sequel was not only taking a meta approach by having Jennifer Tilly play herself, but it would also be dealing with gender identity as a major plot point. It seemed like a ballsy move, and perhaps it didn’t pay off. It wasn’t a huge success theatrically, and the next installment of the series was relegated to a direct to video release. It’s a shame as I truly love Seed of Chucky and feel it has a lot more going on beyond the surface. 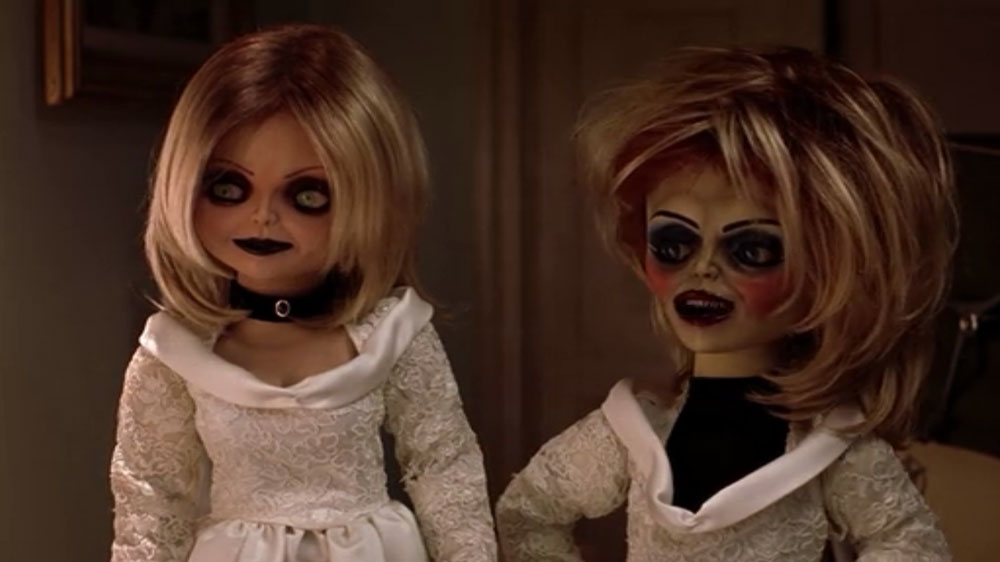 You see, the bloody monster we witnessed birthed at the end of Bride has grown up a bit into a gentle, highly androgynous, doll-child. When we first meet Glen he has been dubbed “Shit Face” by a jerk-off ventriloquist exploiting the doll for his own personal gain. Glen, having grown up without his parents or knowing love, seems terrified of the world around him, constantly wetting himself in tense situations.

An entertainment news show catches his attention where he sees two dolls, Chucky and Tiffany, on the set of a new Hollywood production. Quickly realizing these are his parents due to the “Made in Japan” engravings on their wrists that he too has, Glen sets off to Hollywood to reunite with his family. Of course, the dolls seen on TV are just that, they’re dolls.

A new film starring Jennifer Tilly is being made about the infamous murder spree from the previous film. After some good old fashion voodoo mumbo jumbo, Chucky and Tiffany are resurrected and more than happy to discover they have a child. The problem – they’re unsure if they have a baby boy or a baby girl. Glen, like most dolls, is not anatomically correct. He has smooth, rounded, nothing-ness where his genitals should be. Tiffany wants a daughter. Chucky wants a son, and Glen isn’t sure what he wants. Thus he is given two names, Glen or Glenda (an obvious nod to Ed Wood’s infamous tale of a transvestite in love).

While the film is played mostly for laughs, it never feels cheap or exploitative of the trans community. This being the first film in the series directed by Don Mancini, who has written every entry so far and who himself is an openly gay man, brings a level of sensitivity to the subject in between the geysers of blood and rampant sex jokes. There is a genuine sense of heart and compassion on display. Whenever a scene calls for tears to stream down Glen’s little puppet face, it’s surprisingly heartbreaking. 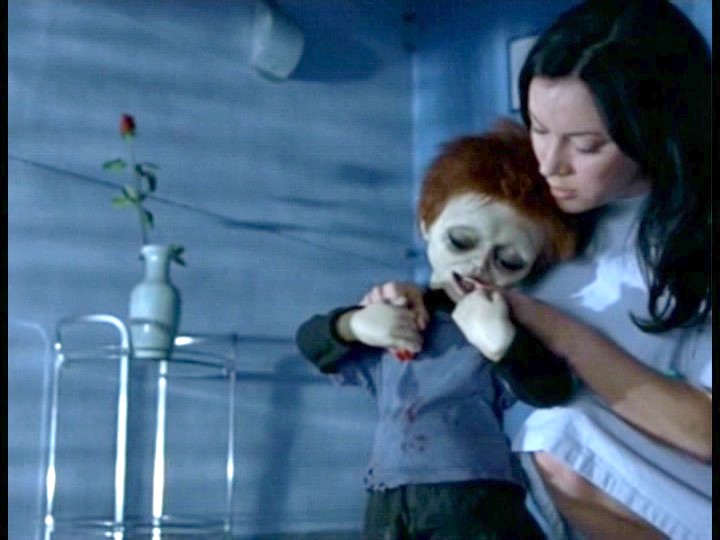 As the story progresses, Tiffany tries to convince Chucky that they should give up killing for the benefit of their family. Chucky wants only to ensure Glen keeps up the family tradition of serial slaughter. It’s a fascinating dichotomy between a family domestic drama and cartoonish B movie absurdity. The riff between mother and father, caused greatly over their fixation on their child’s gender, slowly drives poor Glen to the breaking point.

However, Glen is less concerned with whether he identifies as a boy or a girl as he is with being worthy of his parent’s love. Is he the manly murderer Chucky expects him to be? Is he the sweet little girl Tiffany has always wanted? Or is he a little bit of both? This uncertainty and fear of not being good enough is something that most trans or homosexual youth can relate to. The feeling of being different and the belief that his parents and the world at large will never except him is the true underlying horror of Seed of Chucky. 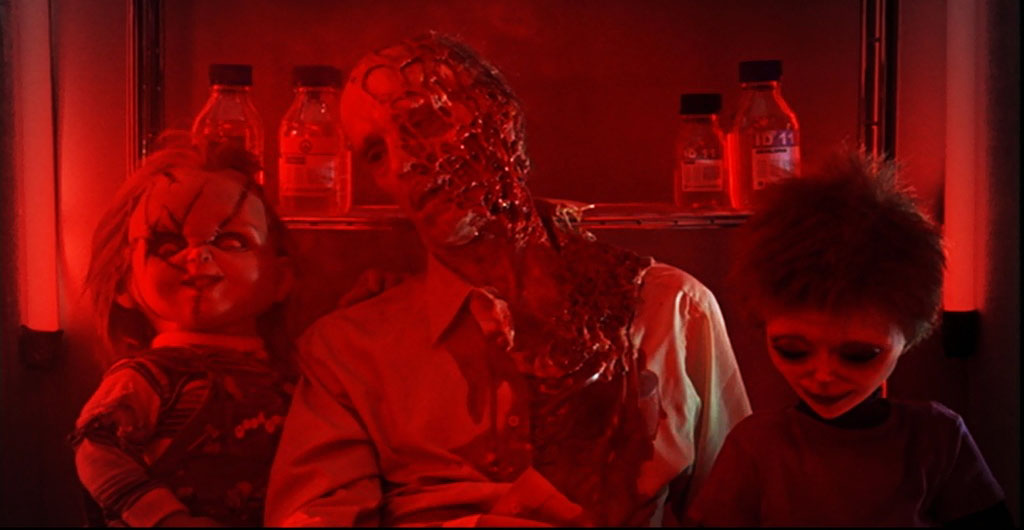 It’s a unique blend of styles that oscillates between splattery gore, raunchy comedy, and heartfelt emotion. Mancini imbues enough wit and subtext, not to mention the fantastic “performances” of the puppets, to the proceedings to make it worth a second look for those who may have written it off upon the initial release. I can admit, it’s not for everyone, but Seed of Chucky manages to deal with a taboo subject in that special way only the best midnight movies can.