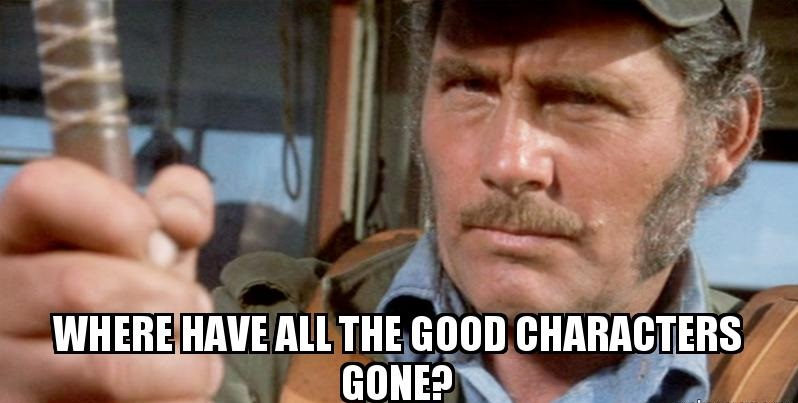 What is the single most important quality for a horror movie to have? That is a question I’ve pondered several times over the years, and though many fans demand things like scariness and originality from the genre, those two things are honestly the least of my concerns when it comes to modern Hollywood horror movies. If you’re asking me, most horror movies live and die by the characters that are in them.

When you think back on your all-time favorite horror movies, there’s a good chance that nearly all of the ones that come to mind are packed with iconic characters. Films like Jaws, The Shining, The Exorcist, and Psycho are widely considered to be the best that have ever been made, and that’s largely because they were scripted by writers who understood the importance of characters worth caring about.

Jaws is perhaps the best example of all, as Quint, Brody, and Hooper are three of the most downright memorable movie characters in Hollywood history – both individually and as a wacky trio. At the end of the day, Spielberg’s classic horror film is one of countless movies about a mega-sized monster, but what makes Jaws stand out from the pack, to this day, are the human beings tasked with killing the beast.

“I try to create sympathy for my characters, then turn the monsters loose,” Stephen King once famously said, and though that sounds like the most common sense piece of advice one could possibly give to a writer in the horror field, recent history has dictated otherwise. Because if there’s one quality inherent to nearly all theatrical horror releases in the last couple years, it’s characters that are barely, well, characters.

It’s merely one of many examples but since it’s the most recent, The Vatican Tapes immediately comes to mind when thinking of films that suffer from this glaring problem. There’s not a single character in that movie worth caring about, rooting for, or being afraid of, and so the plight of a young girl possessed by a demonic entity – as well as of an exorcist trying to save the world – falls flatter than a pancake.

Other 2015 efforts like The Woman in Black 2, Insidious: Chapter 3, The Gallows, Unfriended, and The Lazarus Effect had similarly dull characters, and the films suffered greatly as a result. When the people thrust into horrifying situations aren’t compelling, relatable, or in the least bit likeable, it’s very hard to care about what happens to them, and that spells almost certain death for a horror movie.

We as fans perhaps put too much stress on originality and not enough on character development, and the recently released found footage film Creep highlights why a horror story need not be wholly original. From the set-up to the payoff, Creep is – on paper, at least – a relatively generic movie that seems destined to be instantly forgettable, but an endlessly fascinating central character makes Patrick Brice’s film anything but.

To pluck out another film that bolsters this argument, Greg McLean’s Wolf Creek also excelled in the character department – elevating its simple premise. Nearly the entire first hour of the film is spent on establishing the victims, and while many took issue with that, it’s the downtime that serves to make the horror truly effective. And don’t even get me started on Mick Taylor, one of the most memorable villains of the last decade.

Of course, both of the aforementioned films weren’t made within the confines of the Hollywood system, and the same applies to most of the superior horror efforts to come along in recent years. Late Phases, It Follows, Spring, The Babadook and even Kevin Smith’s Tusk feature characters whose names and faces I will forever remember, but the same unfortunately cannot be said for recent big screen output.

Somewhere along the way, Hollywood seems to have forgotten the importance of strong characters in horror movies, and that’s why each new theatrical release quite frankly feels like a carbon copy of the last one. Not only are the stories similar but the characters are completely indistinguishable from one another, ripped from the horror movie handbook rather than fleshed out and brought to life with care.

The bummer is that Hollywood used to care about the horror stories they told, and the characters that filled them out. The 1970s represented a particular high point for well-told stories that brought a certain level of respect to the genre, but in recent years it seems that the movie machine has become increasingly less interested in plugging anything resembling three-dimensional characters into its output.

And with no characters worth caring about, it’s impossible to care about the stories being told. Right about now, that is arguably Hollywood’s single biggest horror problem.